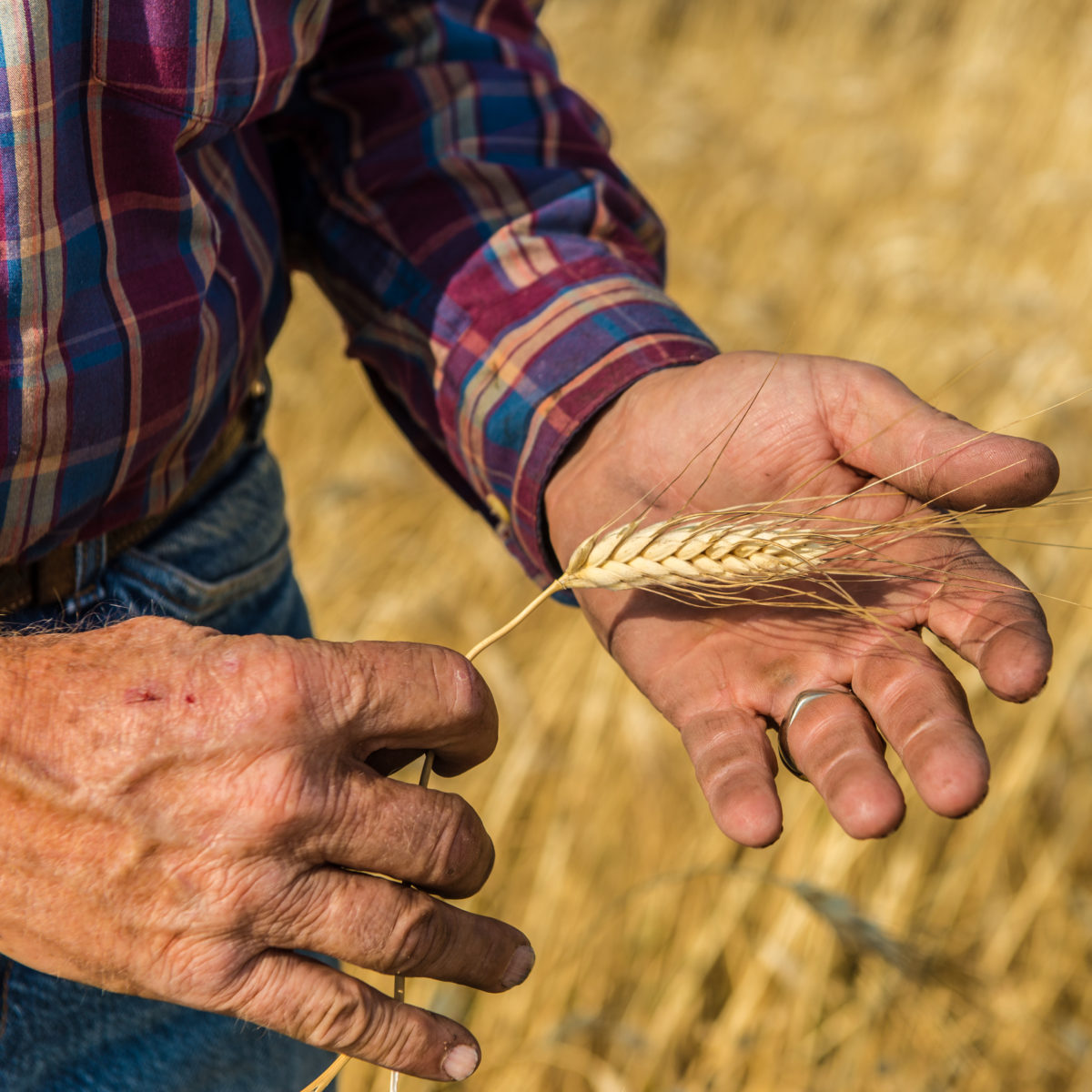 For decades, Kamut—or khorasan wheat—was a fringe food overlooked by the American public. But a scientist and farmer named Bob Quinn believed in the ancient grain and fought against the odds to promote it. Now, his persistence has finally paid off. By 2016, khorasan wheat had been planted on 70,000 acres in Montana, as well as the Alberta and Saskatchewan provinces of Canada, and the grain is used in more than 2,000 products worldwide, from breakfast cereal to beer.

Quinn and his father initially grew the grain as a novelty, but they recognized the benefits of khorasan, after a friend used it to make pasta. “It turned out to be surprisingly delicious, with a wonderful smooth texture, and it could be eaten by a friend who could not eat modern wheat,” Quinn said recently at his 4,000 acre organic farm in Big Sandy, Montana (pop. 600), where he grows 350 acres of khorasan wheat. “That’s when we started to take it seriously.”

As part of the effort to market khorasan, and to ensure its quality, Quinn and his team trademarked the grain in 1990 as Kamut, the word for wheat in ancient Egyptian. Anyone growing the trademarked variety, or making products from it, must adhere to strict standards set by Kamut International Ltd., the company that Quinn founded.

Wheat bearing the Kamut trademark must meet a number of standards: it must be the pure ancient khorasan variety, be certified organic, have a protein range of 12-18 percent, and be 99 percent free of contaminating varieties of modern wheat and 98 percent free of all signs of disease, among other things. Montana Flour and Grains in Fort Benton, Montana, oversees grain production for U.S. growers, contracting with farmers, monitoring quality control, and growing requirements; Prairie Harvest Seeds in Saskatchewan does the same for growers in Canada.

A giant, ancient relative of modern durum wheat, rumored to have originated from King Tut’s tomb in Egypt, khorasan has been shown two to provide more protein, amino acids, vitamins, and minerals than other modern wheat varieties. Kamut International has also done a great deal of its own research, including studies that show that some people with wheat and gluten sensitivities have fewer negative reactions to khorasan than modern wheat and that khorasan has more antioxidant and anti-inflammatory properties. 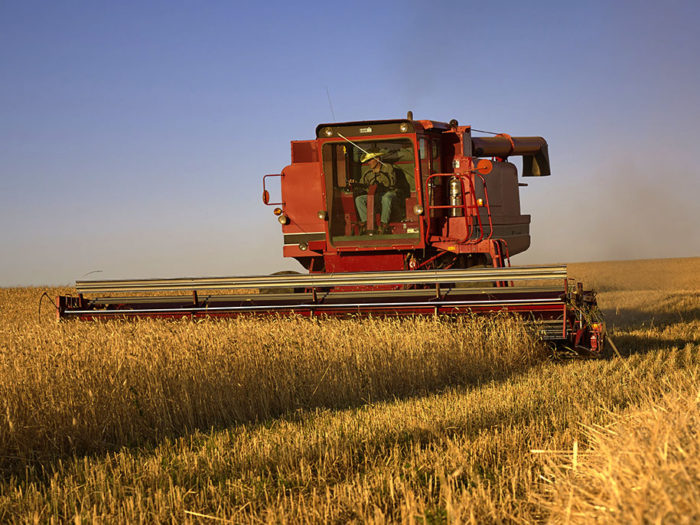 Quinn believes the grain retains nutrients because it hasn’t been altered through modern breeding. He says, “all those changes [to wheat over the years] have resulted in something being left out that we need, and something being added in that we don’t need.”

Kamut is just one of a number of ancient grains that have recently begun to gain traction among consumers. In fact, the National Restaurant Association’s 2017 Culinary Forecast ranks grains such as millet, quinoa, spelt, and farrow, as the number 14 food trend for the new year. Among these, the star of khorasan wheat appears to be rising fast. Data from the retail consumer analytics and insights firm SPINS found that Kamut sales increased by nearly 700 percent from June 2014 to July 2015 (compared to a 360 percent increase for spelt and 39 percent increase for farro).

A growing number of farmers appear interested in khorosan wheat as well. Montana is the top producer of organic wheat, according to the U.S. Department of Agriculture (USDA), in part because the state’s low humidity and cold temperatures help reduce pests and disease, making it conducive to organic farms.

As the price of conventional wheat has dropped and transitioning to the ancient wheat has become easier for those already growing organic varieties, a small number of Montana farmers have shown interest, said Collin Watters, executive vice president of the Montana Wheat and Barley Committee (MWBC). “For whatever reasons, people are getting more into it,” Watters said. “The mindset has changed.”

“Nostalgia and interest in agriculture is good for Montana,” added Cassidy Marn, trade and marketing manager for the MWBC. “You hear all that ‘back to your roots’ [talk]. We never left.” 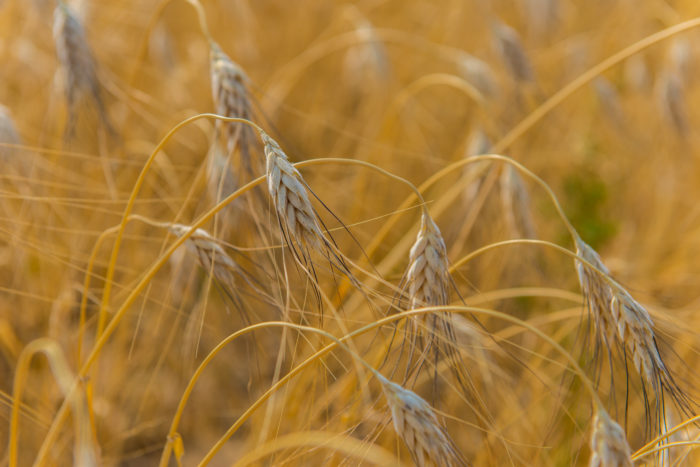 The origins of khorasan wheat are tied up in Montana lore. A U.S. airman is said to have taken a handful of the grain from a tomb near Egypt after World War II. He gave 36 kernels to a friend who mailed them in 1950 to his father, R. E. Dedman, a farmer near Fort Benton, Montana. The elder Dedman turned those kernels into 1,500 bushels of the grain, which he shared with other farmers nearby and they mostly used it for livestock feed.

Bob Quinn first saw the giant gain at a 1963 county fair when he was 16. By the mid-1960s, though, khorasan wheat’s novelty had worn off and area farmers had stopped growing it. Khorasan was too large for most mills, and it didn’t work in standard bread and pasta recipes. At one point, Bob had the idea to create a snack similar to Corn Nuts from the grain, and to help with the pitch, his father Mack located a jar of the grain a family friend still had in his basement. Despite corporate interest, the idea never took off due to the lack of supply.

Bob and Mack, who turned their entire operation organic in 1989, grew small amounts of khorasan during the 1980s. In the latter part of the decade, the grain began to see some commercial success. In 1988, khorasan made its debut in the health food market in both pasta and bread.

Khorasan’s first major success, however, was cold cereal called Organic Kamut Flakes from Arrowhead Mills. Now available only online, Quinn said the flakes were popular for a while and created broader interest in Kamut-brand products.

In 2013, Quinn founded Big Sandy Organics, whose main product is Kracklin’ Kamut—khorasan wheat roasted in safflower oil from the Quinn farm and seasoned with sea salt. Bob Quinn hopes the snack, which hit the market in February 2016, in combination with the overall Kamut effort, will contribute to economic development in Big Sandy.

Around 250 farmers in Montana and Canada grew the ancient wheat last year. Tricia Kovacs, local and regional food systems policy advisor at the USDA, says farmers growing ancient grains face a number of risks. The operations tend to be smaller and often require more management than those growing modern grains, plus the varieties tend to grow in small geographic areas and don’t always have high yields.

But there’s also the potential for higher economic gains, Kovacs says. Specialty grains can be a good niche, she says, because they empower farmers to be price makers (whereas the price of other grains are generally dictated by the commodity market). In turn, these folks often contribute to their local economies.

Today, more than 2,000 products are made using khorasan wheat. They range from items like pasta, breads, cereals, energy bars, pizza, and syrup, to beers like the Organic Survival Stout from Hopworks Urban Brewery in Portland, Oregon. Kamut flour is also widely available now from about 500 companies worldwide, including Bob’s Red Mill, and big names like Kashi are using Kamut-brand wheat in granola.

While more and more Americans are buying and consuming the ancient grain for health reasons or culinary interest, about 85 percent of the Kamut market is in Europe, primarily Italy, where the grain is used for a wide variety of products in addition to pasta and bread. Quinn’s company remains the sole U.S. agent of Kamut, but the wheat has other primary suppliers in Australia, Belgium, Canada, Colombia, and South Africa.

A key to expanding the consumer base is education, Kovacs says. “People can be attached to the tastes and food habits they are familiar with. Sometimes producers need to build consumer awareness of new tastes and textures.” 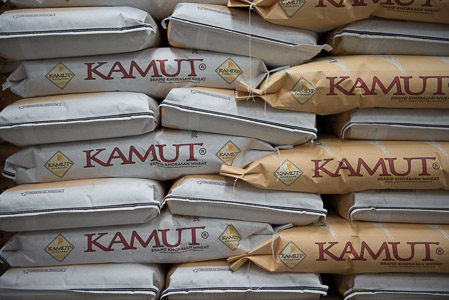 These days, the Kamut International staff in the U.S. and Europe has grown to more than 15, with about five in the U.S. headquarters in Montana and the rest with the sister company, Kamut Enterprises of Europe. The staff oversees the promotion and protection of the trademark, and Quinn’s nephew, Trevor Blyth, presides as CEO.

Quinn spends most of his time strategizing with Blyth and overseeing research for health and nutrition, while actively promoting and aiding the transition to organic farming both locally and throughout the world.

“I could not have imagined in my wildest dreams that the small jar my father found would turn into hundreds of thousands of acres of organically produced ancient wheat and become the main focus of the second half of my working career,” Quinn says.

He’s glad his company’s research has helped people understand the ways modern wheat has contributed to nutrition and health problems. “With that understanding we can now see the path forward to improve the nutrition of our diets and the health-promoting properties of our food,” Quinn says. He hopes Kamut “will contribute to the reinstatement of wheat as the ‘staff of life’ as it was originally created to be.”

Jenn Rowell is a Montana-based journalist living on 26 acres with Leicester Longwool sheep and chickens. She has reported for newspapers and magazines in Alabama, Virginia, D.C., and Montana, largely focusing on military, veterans, and city government issues. Now she's branching into agriculture and food stories to learn more about the community she's living in. Read more >