Experts say we’re approaching a post-antibiotic age, when the drugs we rely on as a last line of defense no longer work. Here’s our explainer. 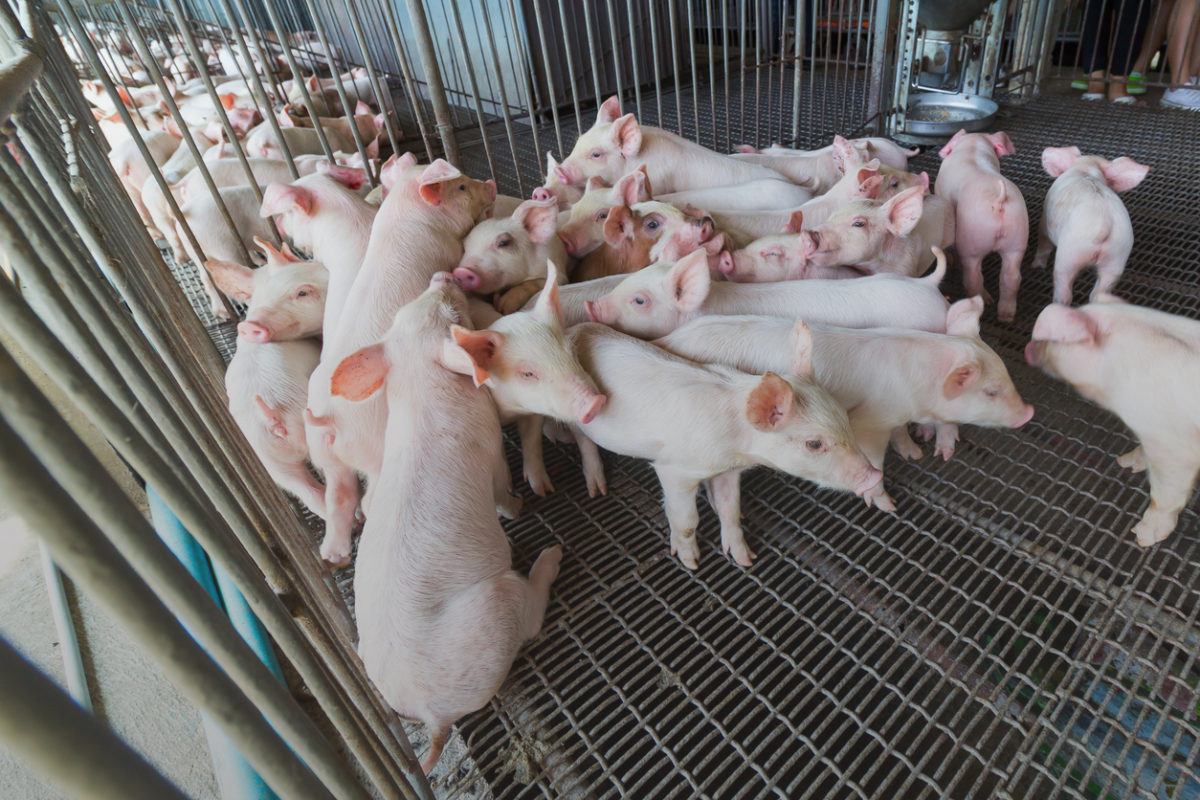 Last week, a team of Ohio State University researchers published the results of a frightening scientific study. The group found bacteria possessing a gene resistant to carbapenems—a class of drugs used as a last resort when all other antibiotics have failed—on a Midwestern hog farm. The scientists fear their discovery could signal “the end of the antibiotic age”—a time when drugs no longer work against deadly diseases.

This is an important development, but the news appears to have been overshadowed by recent political developments. Here’s what you need to know.

What’s so worrisome about this particular type of resistant bacteria?

The presence of this bacteria, called carbapenem-resistant Enterobacteriaceae (CRE), is troubling for two reasons. First, the bacteria, capable of infecting the human body, is highly mobile.

While Texas Tech University researchers found non-plasmid-borne carbapenem-resistant bacteria on the feces of dairy cattle in New Mexico and Texas last January—and plasma-borne CREs have been discovered on farms in Europe and Asia—this is the first time plasmid-mediated gene has been found in U.S. livestock.

Secondly, while the CREs have been found—and proven deadly—in hospitals before, its new presence on a hog farm means both that it’s spreading and that it now exists in a setting that antibiotic expert Dr. David Wallinga describes as a “petri dish for brewing up superbugs.”

“It’s a bad-ass bacteria, to be blunt,” says Wallinga, who serves as senior health officer for the Natural Resources Defense Council. “Once it’s on the farm, because of the concentration of manure and bugs and antibiotics, it can amplify that resistance very quickly. To find that easily transmissible plasmid already carrying resistance to a really important drug class on a hog farm is not a good sign.”

Keeve Nachman, who directs the Food Production and Public Health Program at the Center for a Livable Future at Johns Hopkins University, agrees that finding the highly mobile resistance gene for the first time in a swine production context raises the stakes, and he is concerned about the big-picture implications.

“The findings of this study are part of a larger story of the eroding effectiveness of lifesaving medications we rely on to treat sick people,” Nachman says. “It emphasizes the importance of how not just growth-promotion uses, but also inappropriate preventive uses, can contribute to antibiotic resistance risks.”

So we know it’s a big deal—but let’s back up a little, shall we?

Why are carbapenems so important as antibiotics?

Carbapenems, along with colistin, are lifesaving antimicrobial drugs used as a last line of defense against severe infections that less toxic drugs can’t touch. Doctors prescribe them against infections from bacteria such as Salmonella, Shigella, Yersinia, Klebsiellae, and E. coli.

Have carbapenem-resistant bacteria killed anyone yet?

Yes. CREs cause an estimated 9,300 infections and 600 deaths in the U.S. per year, according to the Centers for Disease Control and Prevention (CDC), and about half of the people who get bloodstream infections from CREs die as a result.

In the past, Wallinga says, CREs have mostly shown up in hospitals, nursing homes, and other healthcare settings, usually among elderly people, transplant patients, and people whose immune systems are suppressed. But that’s changing. He describes carbapenem-resistant infections as “just like with MRSA [methicillin-resistant Staphylococcus aureus], which started off in hospitals and now we see chronic cases out in the community.”

In 2013, the CDC classified CREs as an “urgent threat” to public health in the U.S., one of three drug-resistant threats to earn the label. Centers for Disease Control Director Tom Frieden has referred to CREs as “nightmare bacteria.”

What exactly did the Ohio State University study find?

When they analyzed the samples in the lab, they discovered the bla IMP-27 resistance gene in environmental samples from the nursery barn. The gene did not turn up in the pigs being fattened for slaughter.

Wallinga expects that researchers looked at more of the 20,000 hog farms in the U.S., they would find similar results. “[The researchers] had reason to believe it might be on this one farm, and that’s the one farm where they did extensive sampling,” he says. “And guess what? They found it. I think there’s a strong likelihood this is just the tip of the iceberg.”

Carbapenems are not approved for use on U.S. farms, so how did they get there?

Because they’re so valuable to human health, the scientists were told that carbapenems had never been used on the farm where they showed up in Ohio. But the researchers hypothesized that the farm’s use of ceftiofur, an antibiotic that attacks bacteria in a manner similar to its relative carbapenem, might be to blame.

Piglets on the farm (and many others in the U.S.) receive a dose of ceftiofur when they’re about a day old, and the males receive a second dose less than a week later when they’re castrated. The researchers suspect the use of this related drug provided the selection pressure for the carbapenem resistance to develop in the nursery barn.

Dr. Karin Hoelzer, a senior officer in health programs supporting the food and antibiotic resistance projects at the Pew Charitable Trusts, says the resistant bacteria discovery demonstrates there are many things about antibiotic resistance we don’t fully understand yet. She points to the importance of more research “to get a better understanding of the dynamics of the anti-resistant bacteria—where they came from, what they mean for consumers, etc.”

What’s the precedent for this type of antibiotic-resistant bacteria?

About a year ago, Chinese and UK researchers found a strain of E. coli on a Chinese hog farm that proved resistant to colistin, another drug of last resort. The resistance spread, and in May turned up in the United States in a 49-year-old woman from Pennsylvania and in a pig intestine identified by the U.S. Department of Agriculture.

“Generally, two drugs are being thought of as drugs of last resort for these gram-negative infections: carbapenems and colistin,” Wallinga said. “In the last 12 months, what we’ve found on pig farms are plasma-mediated resistance to carbapenems and colistin. So far, we haven’t found them on the same plasmid, but that’s the end of the road right there, when they’re on the same plasmid.” If and when they acquire that plasmid, he says, “they’re basically untreatable.”

Could the carbapenem-resistant bacteria could eventually enter our food supply?

The bacteria could colonize the people at work in the barns, the farm buildings, or the slaughterhouse. Or it could travel environmentally, through the air or runoff.  “Right now, we haven’t been looking broadly enough for it, so we don’t know if that’s more than a hypothetical possibility,” Wallinga says.

Nachman of Johns Hopkins says he is encouraged by the fact that the authors didn’t find the resistant bacteria in the older pigs. “That said, we can’t discount the possibility that if these types of antibiotic use continue, we may end up with a scenario where these bacteria are present on animal products or on produce fertilized with manure from this type of farm,” he adds.

How big a problem is antibiotic use on farms?

To prevent illness in the confined operation, industrial farm operators administer regular doses of antibiotics via feed and water to all their animals, Kimbirauskas says. And thanks to these sub-therapeutic doses of promote growth, the industry uses antibiotics to produce larger animals with less feed, she continues.

“Livestock are responsible for using 80 percent of antibiotics produced in this country, and those antibiotics are being fed to animals in concentrated feeding operations—not because the animals are sick, but as a substitute for good animal husbandry,” Kimbirauskas says. “The danger is that when you use antibiotics on a regular basis, these bacteria are wicked smart and their interest is to survive—they’re going to mutate so they can be resistant.”

According to an assessment by the U.S. Food and Drug Administration (FDA), the use of “medically important” antibiotics—or antibiotics used to fight illness in humans—in food-producing animals increased by 23 percent between 2009 and 2014. (During that same five-year period, the number of cattle declined by more than 3,000 and the number of hogs fell by more than 6,700.)

Nachman says the industry needs to target its use of antibiotics rather than using them routinely on all animals. “Plain and simple, we shouldn’t be using these drugs non-therapeutically,” he says. “Unless these drugs are being used to treat sick animals, or for curbing the spread of disease, their use is unnecessarily contributing to the selection of antibiotic-resistant bacteria.”

How is the livestock industry responding to the ongoing threat of bacteria with antibiotic resistance?

In the field of human medicine, professionals have taken measurable steps to reduce their antibiotic use. On the agricultural side, though, progress is not as clear. On the one hand, consumer demand for meat raised without antibiotics, or with fewer antibiotics, is exploding, and poultry companies including Purdue, Pilgrim’s Pride, and Tyson Foods have stepped up and pledged to strive to reduce or eliminate the use of human antibiotics from broiler chickens.

The pork and cattle industries have not followed suit, however. “The agriculture industry continues to use antibiotics like it’s another feed additive,” Kimbirauskas says.

Hoelzer explains that part of the reason the poultry industry has made more progress on the issue is the industry’s long history of vertical integration. “The same company controls everything, from the eggs to the bird’s slaughter to the feed. In a system where one company controls everything, it’s easier to make changes,” she says. “Chickens also have a shorter lifespan than cows, which makes it easier to reduce the need for antibiotics.”

Big change across the livestock industry will require strong leadership, Wallinga says. “Purdue really had to re-examine and change what they do in raising chickens, and it’s going to take the same thing in pork,” he says.

What should producers and consumers do?

“Biology 101 tells us what to do,” Wallinga says. “If you know that exposing bacteria is going to select for resistance, what you need to do is stop exposing bacteria routinely to antibiotics, because the more you do so, the more selection pressure you create.” Whether the pharmaceutical companies that make those products are going to be on board with reducing their sales, he says, is “a bigger question.”

On a big picture level, Kimbirauskas would like to see the livestock industry make radical changes to its production model. “They need to get animals out of confinement buildings and back on the ground. They need to reduce animal numbers, and grow them out longer … They need to use better husbandry, so their animals don’t require being fed routine antibiotics.”

She also advises consumers to use their purchasing habits to exercise influence. “People who eat meat should be trying to find producers who raise animals responsibly and without the routine use of antibiotics,” she says.

Hoelzer emphasizes the need for continued research. “These are very, very valuable drugs,” she says, “and we need to make sure we protect them for as long as possible.”