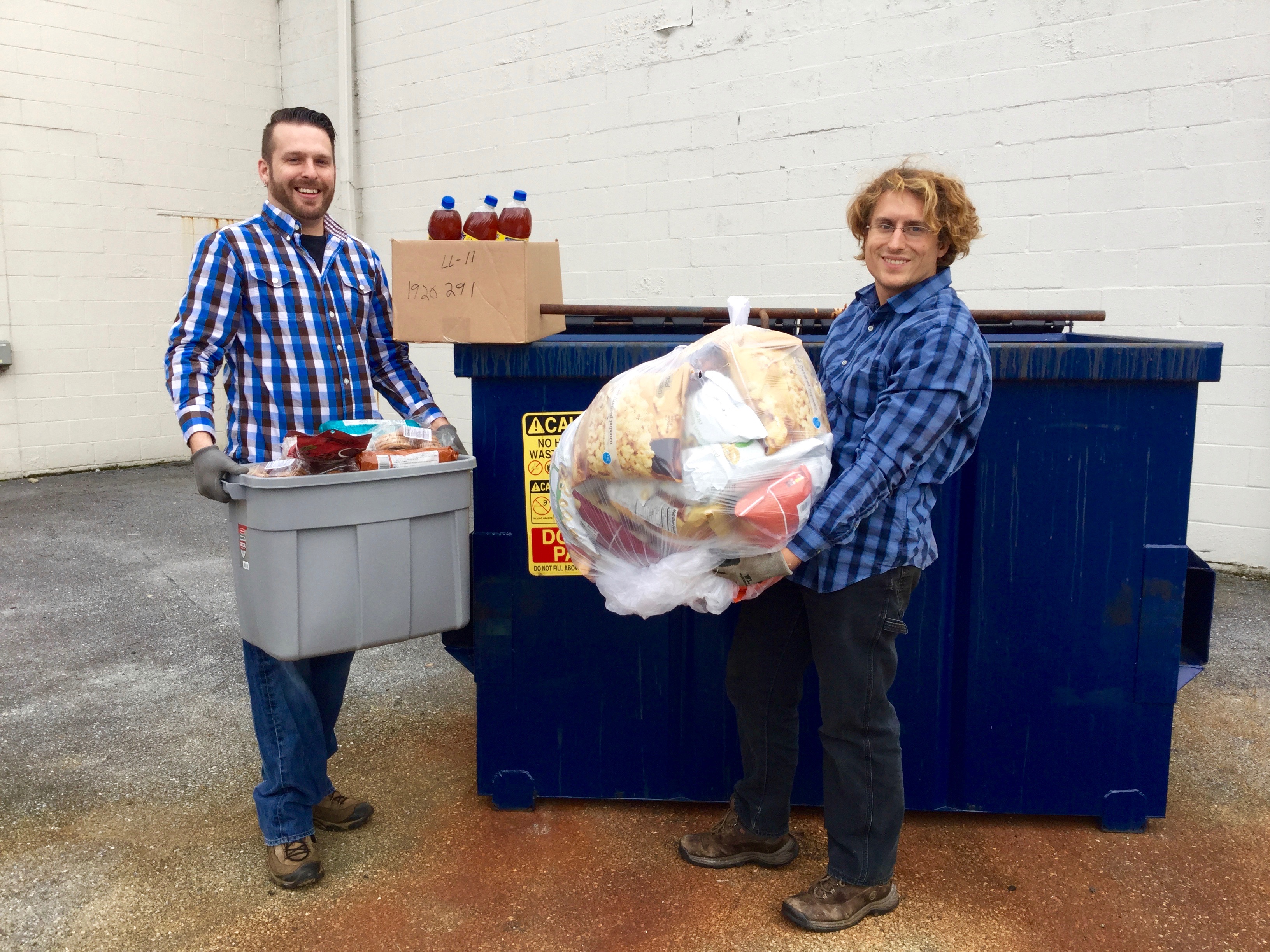 Update on February 2,2017: All charges against Moyer and Troyer have been dropped.

It was after midnight on a night in October and Tony Moyer and his brother-in-law Sam Troyer were wearing headlamps. Without them, it would’ve been impossible to see inside the dumpster the two men were digging through. The dumpster belonged to a CVS store in Hershey, Pennsylvania, and it was not their first dive. Over the last few years Moyer and Troyer had become avid dumpster divers.

“It got to the point where we had so much food, we didn’t know what to do with it,” Moyer says. “So we looked into donating.” In addition to the food they ate and gave away to friends and family, Moyer and Troyer donated roughly 600 pounds of food to local charities in six months. The food was wrapped, not past-dated, and yet it was being thrown away week after week. “I couldn’t in good conscience let it go to the trash,” says Moyer.

Moyer and Troyer had done their research and they knew that what was in the dumpsters was legally available as long as they didn’t break into anything locked or see “No Trespassing” signs on the premises. In general, the practice is legal throughout the United States with the exception of some local laws that have banned or otherwise restricted it. Moyer and Troyer had been stopped a few times by police who politely told them to leave. On that night in October, however, they weren’t so lucky.

“Yeah, it doesn’t look good when two guys are digging through a dumpster in the middle of the night,” Moyer admits. Police spotted them and, this time, brought the brothers-in-law to the station where the two men were charged with loitering and criminal trespassing. “We tried to explain what we were doing and I told them I had receipts showing that we donated this food,” Moyer says. “They didn’t believe our story.”

After being apprehended and charged, the brothers-in-law were released to await trial. Criminal trespassing in Pennsylvania is a summary offense carrying a maximum of 90 days imprisonment and $300 fine. The other charge, however, is a third-degree misdemeanor with charges of up to a year imprisonment and $2,000 in fines. Though CVS didn’t press charges against the two men, the local police did. It’s unlikely they would face the maximum sentences, but the charges against them are not paltry. As soon as Moyer got home that night, he sent an email to someone he thought could help: Rob Greenfield.

As we reported last year, the food waste activist had offered to pay the fines of individuals arrested for dumpster diving for food (as long as they weren’t breaking any other laws in the process).

Food waste has recently gained increased national attention—last year, the Obama administration announced a goal of cutting the amount of food wasted in this country by 50 percent. And Greenfield has played an active and very public role in the fight against retail food waste by sharing photos of the vast quantities of food he has recovered around the country. In 2008, in-store food losses amounted to 10 percent of the total retail food supply, or roughly 43 billion pounds.

Greenfield believes one of the biggest barriers to dumpster diving—and, as a result, wasted food recovery—was a fear of being ticketed or arrested. He hoped his promise might embolden some potential divers to get out of their houses and into the dumpster.

Greenfield’s name came up while Moyer had been researching the legality of dumpster diving. Now, he figured, “what was the worst that could happen?” Greenfield responded a few days later. He came to Pennsylvania soon after and created a video about their situation which has received over 400,000 views since it was uploaded in late November. Greenfield is currently raising money through a GoFundMe campaign that will be used to pay the divers’ fines if charges aren’t dropped. If they are dropped, the funds will go toward creating “a food rescue program with grocery stores so that the food can be donated and not put in the dumpster in the first place.”

Greenfield says he had heard from other people in similar situations, but Moyer and Troyer were “the first ones that really exactly fit the bill.” Some had written to him because they’d been arrested, but not for dumpster diving for food, and others had been ticketed for trespassing but never followed up after Greenfield’s initial response.

The food waste activist didn’t think anyone would actually take him up on his offer and says he hasn’t found accounts of people getting arrested for dumpster diving before. But it does happen. In 2013, a homeless veteran’s arrest in Houston received more coverage than average since Houston has not only outlawed dumpster diving is also among the cities that have made it illegal for anyone to feed the homeless without a permit.

In the almost two years since he announced he’d pay these fines, Greenfield has changed his impression of the people who are apprehended and prosecuted for dumpster diving. “What I learned is that [Moyer and Troyer] aren’t the only ones for sure,” he says, though he still doesn’t believe the risk is high enough to keep people away from food recovery.

Later this month, Moyer and Troyer will have a preliminary hearing and they’re hoping to see the charges against them dropped. If not, they hope to show the judge that about 90 percent of the food they’ve recovered has been donated to charity in hopes it that the charges will be dropped.

While many stores have made attempts to cut down on waste by donating spare food (Trader Joe’s donated over $321 million worth of food to food banks in 2015 and has donation coordinators at each location) others haven’t substantially changed their policies. Troyer and Moyer say they’re regularly found large quantities of food at their local CVS as well as other “big box stores.”

Greenfield had some stronger words about the chain: “CVS truly doesn’t care from what I’ve seen while diving into hundreds of CVS dumpsters across the nation.”

“We’ve asked if we can just come in and take the food and donate it directly but they said they can’t do that,” says Moyer.

Moyer recalls that the manager told him the chain donated “on a store level,” but had no further details  about what that means in practice. CVS didn’t respond to our request for comment about how it handles food waste, but the company’s “social responsibility” page lists waste reduction among their goals and notes that in 2015 they made $56 million in “product donations.”

Dumpster divers are arrested and ticketed, but no one is tracking how often. Some divers, like Moyer and Troyer, have jobs and homes; others are low-income or homeless people who rely on the waste stream for sustenance. Most of these arrests never make the news. “They’ll go to court and whatever the system lays on them is what will happen,” Greenfield says.

Unless the dumpster diver is fighting back or goes to the media, people simply pay up and move on. Moyer found Greenfield because he happened to do his research before getting caught. But, as Greenfield says, “I think most of the people [who get ticketed or arrested] may not find me because they don’t have a computer in the first place.”