What Can Small Farms Learn From a Car Company? | Civil Eats

What Can Small Farms Learn From a Car Company?

Some farmers are using lean manufacturing, or “the Toyota Way,” to streamline operations and focus on customers' needs. 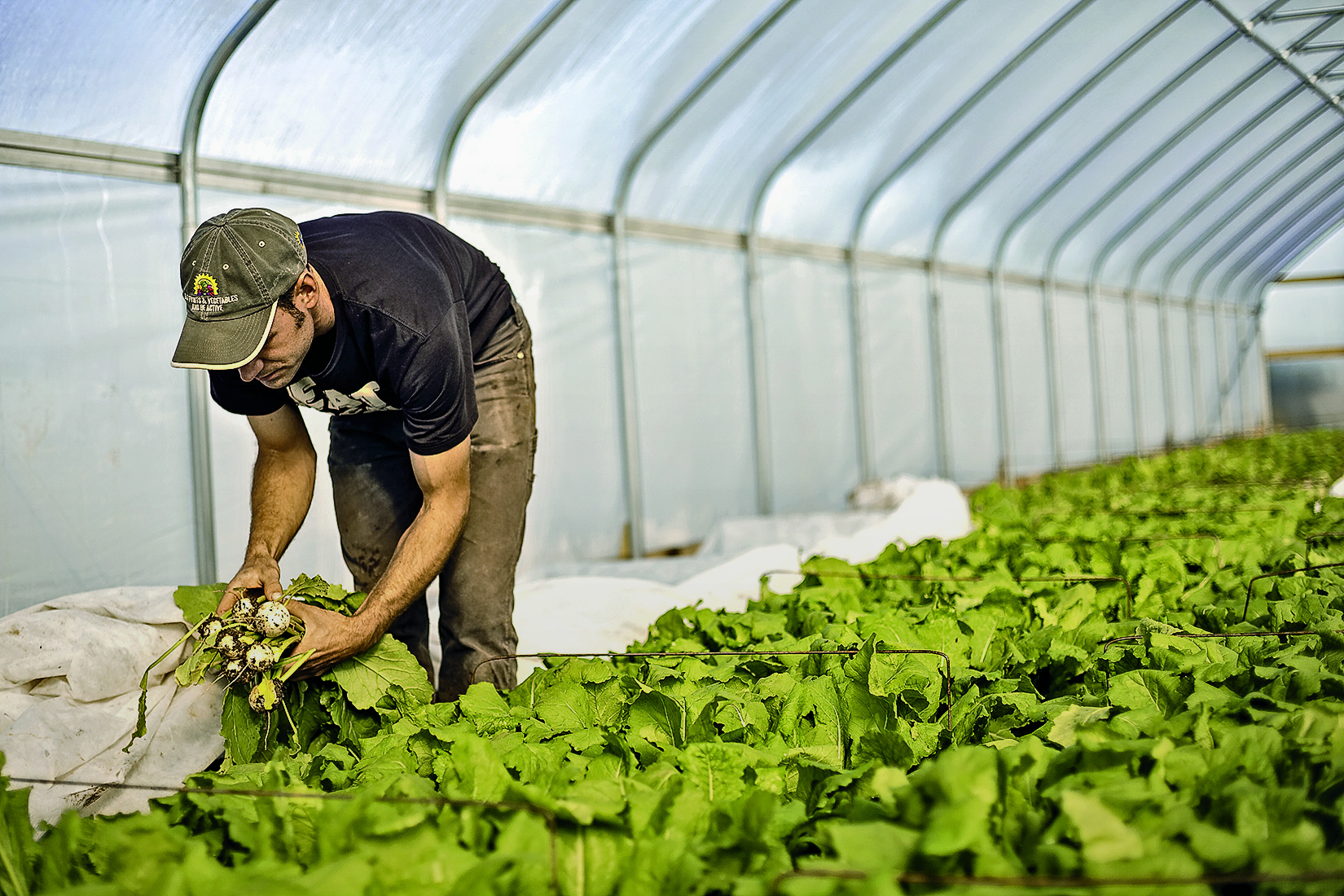 Modeling our farms after factories hasn’t exactly resulted in the most sustainable farming practices over the years. The shift toward feedlots, concentrated animal feeding operation (CAFOs), and monocultures can be directly attributed to factory thinking—and to the fact that agriculture has increasingly become like a production line in recent decades.

Of course, not all factories are the same. And a new line of thinking suggests that today’s farmers might just be modeling themselves on the wrong type of factory.

Enter: Clay Bottom Farm. Several years back, Ben Hartman and his wife were getting by, but just barely. Their small vegetable farm in Northern Indiana was starting to gain some notice from chefs and local newspapers, but they were feeling overworked, especially for an income that did little more than pay the bills.

Upon hearing this from his farmers, a customer named Steve Brenneman, owner of The Aluminum Trailer Company, thought he could help. At his nearby factory, Brenneman employed a system of production called lean manufacturing and he had some ideas about how the same principles might help save the Hartmans’ time, money, and energy.

Lean manufacturing is a philosophy of production based on the unique system developed by the car company Toyota. Save for 2011 (the year a tsunami devastated Japan), Toyota has been the number one car manufacturer in the world for the last eight years. It’s also the most valuable vehicle brand by nearly $3 billion. And because it informs every aspect of Toyota’s business, many point to lean manufacturing, or what the company refers to simply as The Toyota Way, as the reason for such success.

Hartman had some reservations about implementing a system designed for car manufacturing on his diversified vegetable farm. He worried that the lean approach may lead directly to monoculture farming, and he was also concerned about the practicality of implementing a system based on innate objects in an industry where the parts and pieces move and grow, get disease, get eaten, and die—sometimes all overnight.

“Imagine running your factory without a roof over your head,” says Hartman, “That’s the kind of volatility we deal with on a regular basis.” The standardization factories could rely on, in other words, seemed flatly unrealistic on a farm.

What convinced Hartman was Brenneman’s assurance that the lean approach was not just a style of manufacturing. Instead, he explained, lean was a way to grow more profitable with almost no added investment. “It’s just improving your process,” Hartman recalls Brenneman telling him. “And that idea appealed to us.”

Indeed, so improved became the Hartmans’ process, that Ben published a book in 2015 called The Lean Farm, detailing how he turned this style of manufacturing cars into a better way of growing food.

In the 1970s the Massachusetts Institute of Technology (MIT) sent a group of researchers to Japan to study Toyota’s method. “We were trying to figure out why U.S. companies were falling behind,” says Jim Womack, lead author of the resulting 1990 book, The Machine that Changed the World, “particularly the manufacturing companies.”

By this point, America was already out of the game in terms of small electronics like the Sony Walkman so, says Womack, cars looked like they were next to fall. And what they found at Toyota gave them a glimpse into why.

Toyota had been taking an altogether different approach to vehicle production since the 1950s. Most manufacturers at that time were still following the mass production model championed by Henry Ford. And for good reason. Though ill-suited to providing variety to consumers, Ford’s method excelled at producing large amounts of cars for cheap. You just had to be able to sell the resulting inventory.

Sensing a market hungry for options, however, Toyota set forth designing a more adaptable system of manufacturing, one that produced a wide variety of vehicles, but at a similarly low cost. The company’s philosophy revolved around asking one simple set of questions: What do customers want, how much do they want, and when?

The MIT group found that this customer-centric approach permeated everything about Toyota from design to manufacturing to sales. Priority was placed on activities that brought value to the customer, and activities that didn’t add value were considered waste (called muda), and eliminated or reduced. And when Womack and his team examined this very trimmed-up manufacturing style, lean seemed like an all-too-appropriate moniker.

Because waste elimination is at the core of lean thinking, the first thing Steve Brenneman did when he came to Clay Bottom Farm was to observe Ben Hartman working. Specifically, he wanted to watch Hartman prune his tomato plants, an intensive task that dominated much of the summer workload.

Brenneman then asked a simple question: Why not hang your pruners in the greenhouse where you’re actually using them?

“The thought had never occurred to us,” admits Hartman. “We had always just kept all of our tools in a central tool storage area.” 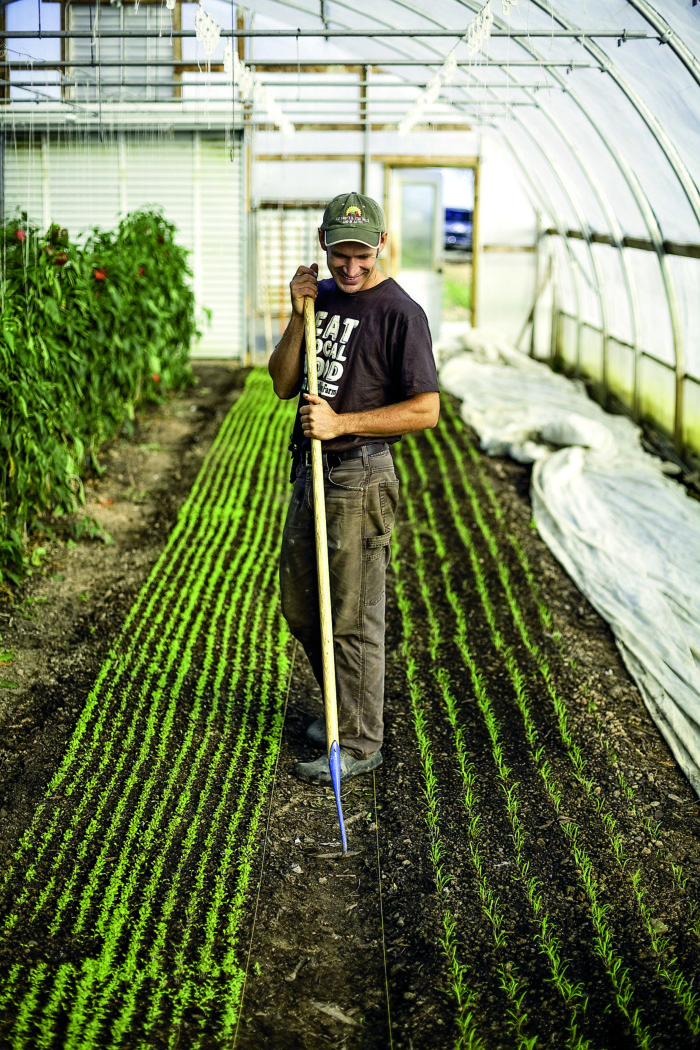 In lean production, all wasted time is actively sought out and eliminated through specific lean “tools.” Process mapping, for instance, allows a business to go through every element of the operation to eliminate unnecessary steps. This exercise frees up time, or what lean thinkers call capacity, without spending money. Then, because continuous improvement is paramount, this mapping is done regularly.

Of course, spreading farm tools closer to their point of use may only save Hartman 10 or so minutes a week, but over the course of a year, 10 minutes per week is equal to nearly nine hours–one full workday–and nearly 10 whole workdays every decade. Shave 10 minutes off of 10 tasks and you’ve freed up a hundred workdays in those 10 years. Find enough waste, and theoretically, whole years could be saved.

In addition to cutting waste, lean production heavily emphasizes the act of adding value to the customer. Neglecting that latter side of the equation often creates a situation where the farmer is operating more in the vein of Henry Ford’s mass production model: grow in bulk, hope it sells.

A lean practitioner would call this “push” thinking, where the manufacturer is pushing the product out to the consumer and not allowing consumers to guide, or pull, the business.

The ubiquity of corn and soybean products in processed goods makes for an easy example of push marketing. These crops are cheap to mass produce, but require a lot of creativity—pushing—to sell. On a different scale, however, the same could be said of CSA farms that don’t ask customers what kind of produce they prefer, whether the quantity is appropriate, and whether the drop-off times are convenient. In lean, what the customer wants is what dictates production.

Moreover, inventory is seen as a type of waste, since it ties up money and resources. So in order to be truly lean, a farmer must balance low inventories with customer demand. Whether or not that approach can work for all farms or with all crops, however, is an important question.

“For me,” explains Jeremy Mueller of Excelsior Farm in Oregon, “one of the biggest factors is: What are you growing?” On his small farm, Mueller grows cherry tomatoes, greens, and culinary herbs. For that, he says, lean has been a nice fit.

“Salad greens very much lends itself to this pull marketing,” says Mueller. “I can have a quick turn around, it has a short shelf life, and I can just sort of feed it and let the customer pull what they want.”

He points out that lean may not always fit with certain crops, and not just because of inventory. Storage crops, like potatoes and winter squash for instance, require a lot of labor at planting and harvesting time and often need to be stored for long periods by the farmer.

Growing these crops, “tends to be a little further from where lean came from,” admits Mueller.

Hartman has cut the list of crops he grows from about seventy down to around 30—no winter squash, sweet corn, or potatoes. But in so doing, he has also cut the amount of cropped acreage from four acres to less than one, while increasing his profits. Now, he says, he’s working 30-hour-weeks with higher revenues.

And though lean is not the only thing keeping Hartman from becoming a monoculture farmer, he says it helps. By encouraging him to defer to his customers wants and needs—a variety of high-quality produce—diversity is what he maintains on his farm.

And though lean is just beginning to penetrate the farming world, Jamie Bonini, Vice President of the Toyota Production System Service Center (TSSC), says he’s “intrigued by that possibility.”

TSSC, is a non-profit Toyota affiliate that works to translate lean, or what Toyota calls the Toyota Production System (TPS), to other industries. And though Bonini has yet to work with farmers, he sees farming as like a potentially good application for TPS.

Bonini offers the example of reducing lead time, which is a large focus of TPS. In farming, the lead time would be the amount of time between harvest and customer. Where you can lessen that time, says Bonini, you have the benefit of not only fresher produce, but less wasted food in the process.

As Bonini’s example illustrates: It’s not about the size of the operation, it’s about the quality of it. And as Hartman writes in The Lean Farm: Farmers have been told for decades to get big or get out. Buy more land, get more equipment, produce as much as possible.