We spoke to people around the country about their strategies for breaking bread without breaking bonds this holiday season. 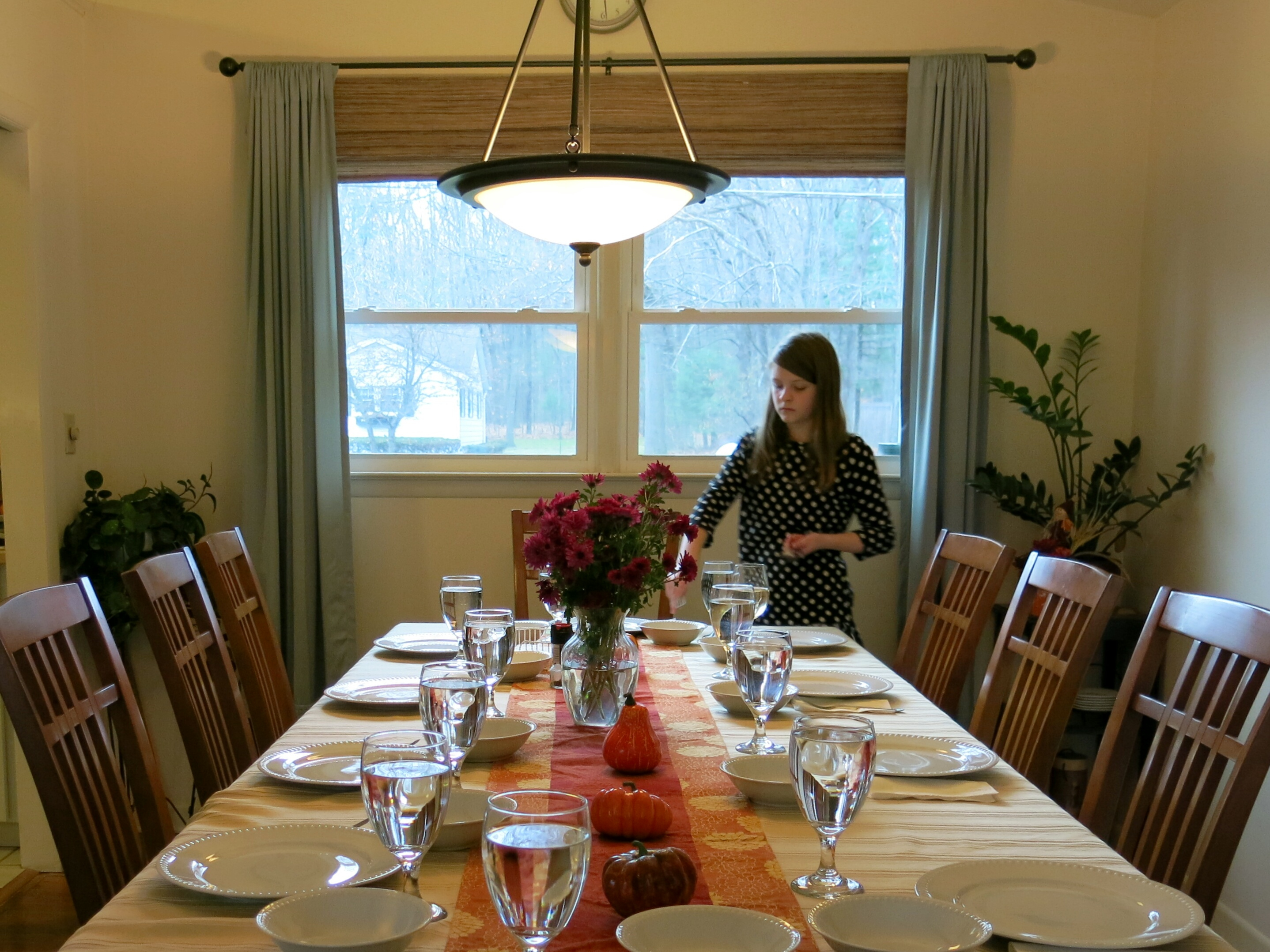 “One of the greatest things about Thanksgiving this year is that the election will be over.”

I found this line recently in an email from a dear friend with whom I spend Thanksgiving every year, and the irony of those words—and what they say about how much has changed in the last month—struck a chord.

Now, with the holiday nearly here, many Americans are preparing to sit down at divided tables. Some are relieved, but many of us are still reeling. And President-Elect Donald Trump’s cabinet appointments, his meeting with Japanese prime minister Shinzo Abe, his stonewalling of the press, and the non-stop downpour of endorsements from white supremacist leaders suggest that there’s no end in sight.

We asked our circles: How are you planning to cope with political differences this week? Here’s what we heard.

Get Clear on Your Role

Brittni, a public health professional based in Oakland, is planning to spend part of the day with her husband’s large family, including a cousin who most likely voted for Trump.

As a Black woman whose husband is white, Brittni says she has generally gotten along well with his family. “I fit right in, because I’ll fight with whomever at family gatherings. I’ll hold my own.” But this year feels different, she says. “It’s not just about Trump winning the election. It’s about: What does that mean to my immediate and intimate family? What does it mean for our [potential] children’s identity and how they navigate the world and how they are perceived.”

She says Trump’s election puts unique stress on people “who are at the intersection in relationships,” whether that be inter-generational relationships, or people with different races, classes, and gender identities. But she adds that, in this case, she doesn’t feel like it’s her responsibility to initiate a conversation about how to bridge the gap between Clinton and Trump voters.

Because white Americans overwhelmingly voted Trump into office, she says, “This is a conversation that white people need to be initiating with one another. As a Black woman coming to the family dinner, I don’t feel like I have time for that additional burden of educating them about why I’m mad.”

But she does think the election will come up, because “this is something that very directly impacts everyone who will be in that room. I’m more confident that this will come up than, say, the murder of Alton Sterling.”

And she advises white folks not to shy away from having the conversation just because they think they’re not going to change someone’s mind immediately. “You also don’t know who else in the room is going to listen. Although you might not change the opinion of the person who voted for Trump, speaking up definitely has an impact on the other people in the room who might have felt uncomfortable speaking up.”

Delia is a music teacher in South Philadelphia. She and her husband both voted for Clinton in a district that went to Trump. When she found out that her mother-in-law had voted for Trump, she says, her first reaction was “to want to flee, and to cancel Thanksgiving,” she says. But her husband felt strongly that they should stick to their plan to spend the holiday with family.

“I would say I aim to talk about politics during Thanksgiving. It seems so emotionally dishonest not to. I think we can’t just hide in all of our own corners, that’s absolutely part of how Trump got elected,” she says. “I feel myself wanting to scream ‘but you’re a racist, you’re a misogynist,’ but that just shuts everyone down. My plan is to discuss and try to maintain some empathy (even if it’s so impossible).”

Delia is thankful for the Thanksgiving Toolkit created by Showing Up For Racial Justice (SURJ), a national network of white organizers working to reach the “White people—men and women alike, mostly those with economic privilege—[who] put Trump in the White House.”

“As a white person, I really feel like it is my duty to ‘get my people.’ I have little to risk by having these discussions, but everything to gain by seeing family members who love my [18-month-old] daughter changing their minds about right wing politics,” she says. “I’m going to try to be kind, but honest. I see how my friends of color, my Muslim friends, my undocumented students, myself as a woman are affected by this election and feel like silence is the worst path to take.”

Jay, a communications professional from Chattanooga, Tennessee, will be spending the holiday with both his parents and his in-laws, who have opposing political views in nearly every way.

“The divisiveness when we are in this kind of situation almost doubles down—we know we can’t go there. The emotions are so high—everyone has been tense about this in a way I don’t recall it being before,” says Jay. “That intensity probably makes us even more aware of treading lightly and not going somewhere in a conversation that is going to lead to a place that affects the love we have for each other.”

He’s also trying to take comfort in the fact that, “as much as politics potentially divide them, you will probably not find two families who are more passionate about being from Tennessee. We all love this place and agree on how important family is—and, frankly, how important politics are. But that passion for it, and that understanding that it’s important to be a good citizen and thoughtful about this stuff. That’s something that we have in common. But that also makes it a Pandora’s box that we actively keep closed.”

It’s Not Always Safe to Disagree

Jess, a Brooklyn-based chef, food writer, and activist, is spending the holiday with her father and uncle, who voted for Trump. She says that she’s wrestled with the fact that “even though racism, sexism, and homophobia may not have been their intent, that’s the impact [of the election], and they are morally responsible for that.”

And while Jess isn’t expecting to engage in direct conversation with her family members over Thanksgiving (she says in the past it has become pretty aggressive, especially when alcohol is thrown in the mix), she has been able to have respectful dialogue with them. “I heard a lot about home ownership, the American dream, and taxes steadily rising from suburbanites—something that may be hard for those of us in cities to comprehend. We accept that we can’t afford luxury condos as a consequence of living in the city,” she says.

“I think it’s important to understand that when dealing with people whose politics are motivated by fear instead of love, people who have spent years listening to what I refer to as ‘hate radio’), that those patterns of violence are repeated in their personal lives.” For these reasons, she says safety can be more important than changing anyone’s mind in the short term.

You’ve Probably Had These Conversations Before

Angela, a Berkeley-based yoga teacher is going to meet family in Tennessee, where she’ll be talking to multiple family members who supported Trump.

“I know they know that Trump is crazy. My mom’s quote was, ‘your dad hates Trump so much he almost voted for Hillary.’ They do not believe in Trump and what he stands for.”

She says, “the thing to remember about having these conversations with loved ones is that you have probably had these conversations before. You already know their points so you can prepare your counter points ahead of time.” She was considering printing out some articles to share with her family around the table, but she feels that that all political conversations should happen early in the day.

“Try to not talk politics too late at night, when too much alcohol is involved and try not to say anything so personal that it does irreparable damage to these important relationships,” she suggests. Angela’s also planning to a lot of deep breathing, cooking, and taking walks to get through the week.

Find Out Where the Line Is

Jen, a writer and life coach who lives in Mendocino, California, is heading back to Indianapolis, to spend the holiday with two parents who voted for Trump.

She’s not planning to change anyone’s mind, but she doesn’t plan to hold her tongue either. “I want to focus on common values. I want to talk to them about the recent appointees and what that means for them. I want to listen and at least try to understand where they’re coming from, so I can be in relation to them. I’m not going to shut them out of my life because of the choices they’ve made,” she says.

More important, she says, “I want to ask: What are their plans? If things start getting really oppressive, how are we going to identify that with their viewpoint being what it is? What is their threshold? At what point will they say, ‘This has gone too far?’”

Need more resources? Here’s the New York Times’ 19 questions to ask loved ones who voted the other way.