How Hungry Kids Will Fare Under Trump | Civil Eats

How Hungry Kids Will Fare Under Trump

President Donald Trump and the Republican-controlled Congress will likely walk back most of the progress made on school food and nutrition programs in recent years. 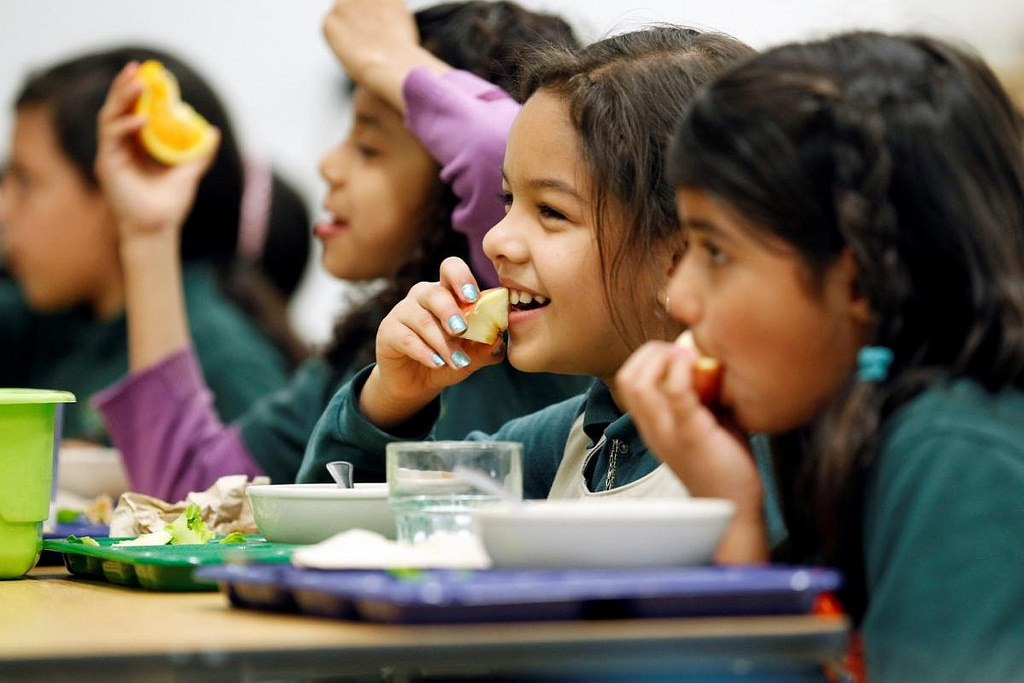 In the aftermath of Donald Trump’s surprise victory on Tuesday, all the things I’d planned to write about this week—a review of a new cookbook, an informative article I recently read—suddenly seem exceedingly trivial. Instead I can only think about the many troubling ramifications of this election, including what it may mean for the millions of children who rely on federal programs like school meals for critical nutrition.

At one end of Pennsylvania Avenue, we’ll have a Republican-controlled Congress taking up the long-overdue Child Nutrition Reauthorization (CNR) next year. House Republicans have already shown a willingness—indeed, an almost vengeful eagerness—­to roll back the improved school nutrition standards championed by the First Lady.

They want to get rid of the “Smart Snacks” rules that cleaned up on-campus junk food fundraising, slash the number of schools able to use the Community Eligibility Provision to serve free meals without paperwork, and allow schools to sell “a la carte” items like pizza and fries on a daily basis. They’ve also proposed a three-state block grant pilot for school meals, an idea which could cripple school meal programs in the event of an economic downturn, and which is seen by some as a precursor to dismantling the entire National School Lunch Program.

Of course, school meals are not the only federal program on which hungry kids rely. Forty-four percent of supplemental nutrition assistance program (SNAP) recipients are children, but the current Republican party platform advocates divorcing the program from the farm bill, thereby making it far more vulnerable to significant budget cuts. Indeed, House Speaker Paul Ryan has already indicated he hopes to drain $1 trillion from the program over the next ten years.

Then there’s President-elect Trump himself. While the fast-food loving candidate didn’t talk much about food policy on the campaign trail, what little he did say was rather alarming, including a plan to eliminate many food safety regulations, along with the nonexistent “FDA Food Police.”

As for school food in particular, Trump didn’t join his primary opponents Ted Cruz and Chris Christie in mocking Michelle Obama’s school food reform efforts on the campaign trail. (See: “If Heidi’s First Lady, French Fries Will Return to the Cafeteria” and “Christie on School Food: “I Don’t Care” What Kids Eat.”)

Instead, the only time Trump spoke about school food (to my knowledge) was when he appeared on the Dr. Oz show in September. According to The Atlantic, a teacher in the audience asked about childhood obesity and Trump responded: “That is a school thing to a certain extent. I guess you could say it’s a hereditary thing, too. I would imagine it certainly is a hereditary thing. But a lot of schools aren’t providing proper food because they have budget problems, and they’re buying cheaper food and not as good of food.”

If you squint a little, that rambling response could actually be construed as supporting healthy school meals served by well-funded districts, but I’m not holding my breath.

After all, Trump is the same person who tapped Sid Miller, the Texas Agriculture Commissioner, as one of his advisors on food policy. Miller caused an uproar just last week by calling Hillary Clinton the “c-word,” but well before that incident (and before a whole lot of other outrageous and despicable behavior in my state), Miller’s first act in office was bringing back soda, deep fat fryers and birthday cupcakes to Texas schools.

Now, Politico‘s Morning Ag newsletter reports that Miller is actually on the short list as a possible (if unlikely) pick for Agriculture Secretary, the official who, among other duties, oversees all federal child nutrition programs. That Miller is even being considered for such a position tells us all we need to know about the relative importance of these issues to Trump and his advisors.

I unwittingly launched The Lunch Tray right in the middle of the last CNR, in the summer of 2010. Back then, it was thrilling to have a devoted champion like Michelle Obama in the White House, willingly spending her political capital to push for the Healthy, Hunger-Free Kids Act. For advocates like me and for concerned parents around the country, it’s going to be excruciating to watch the likely dismantling of many of those reforms in the days ahead.

For hungry children, the impact could be devastating.