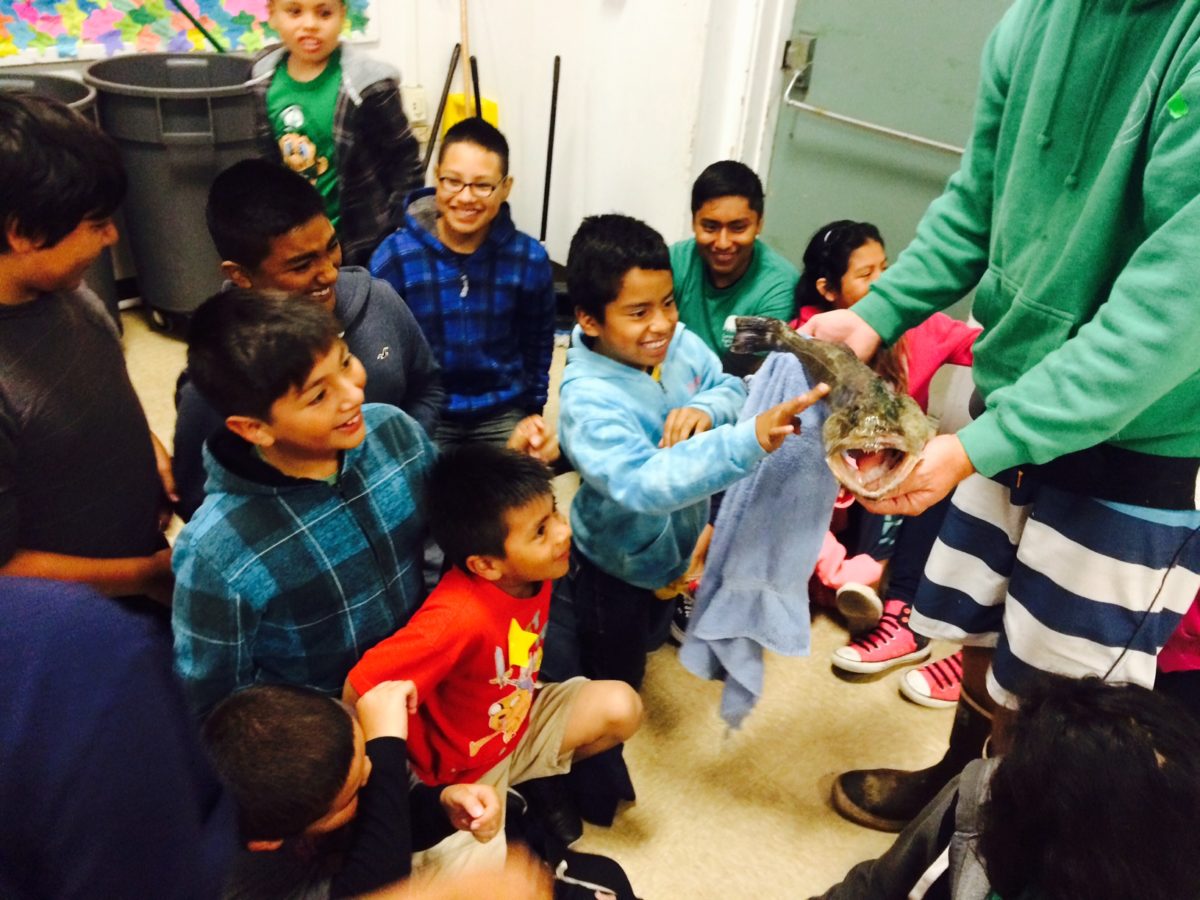 A few years ago, Alan Lovewell had a vision. He wanted to replace the bland, deep-fried anonymous “fish” served in school cafeterias with flavorful, locally caught seafood—as a way to bring nutrition to the kids in his area, and help them understand where their food comes from.

Lovewell had created a community supported fishery (CSF) subscription service called Real Good Fish, which provides local seafood direct to consumers, in much the same way that community supported-agriculture (CSA) works for produce. The program enjoyed quick success after it launched out of Monterey Bay in 2012 (it now supplies more than 1,000 members with weekly shares). But Lovewell wasn’t satisfied. In his mind, he had a long way to go to build a regional food system.

The young entrepreneur shifted his focus toward supplying seafood to public K-12 schools, particularly in districts where the majority of students receive free or subsidized meals. In 2014, Real Good Fish partnered with the nonprofit Center for Ecoliteracy to pilot the “Bay2Tray” program in California’s Monterey Unified School District. After a significant number of students reportedly chose the fish tacos over pizza, the team at Real Good Fish knew they had some traction. Bay2Tray quickly spread to three more school districts in the state.

“Looking at the maps [in California], the irony is that most of the areas that produce the nation’s food are in fact food deserts,” says Lovewell, who was recently named a White House “Champion of Change for Sustainable Seafood.” “I realized that the missing piece was schools and children: they have the lowest income and lowest access, and obviously, they are the ones with the vested interest in the future of our oceans.”

The Bay2Tray program is not alone. Across the country in seaside states including Oregon and Massachusetts, schools are piloting a range of models of “boat-to-school” programs. Most of these programs feature an educational component as well as an edible one; organizers provide ethically caught seafood, and an understanding of where and how that seafood was harvested.

In 2015, Real Good Fish received a $6,000 grant from the outdoor clothing company Patagonia to bring the fishermen into the classroom. Fisherman Ernie Koepf, who has a lifetime of experience catching herring in the San Francisco Bay, contributes his spare time. After answering the typical, urgent questions about whether he’s seen a whale—or a shark!—Koepf focuses on making the basic connection between local fish and the food on the kids’ plates.

“When I come into the classroom, I speak to them about seafood [from] the perspective of the food chain—how fish end up on their plates, and how we catch them,” says Koepf. “And they find this very fascinating. It’s a very rewarding experience.”

Consumer awareness and interest in local, sustainably caught seafood has grown in the years since the first CSF, Port Clyde Fresh Catch, took off in Maine in 2008. The fishermen in that community mobilized in response to the decimated stocks of signature New England species like cod and flounder and the resulting tightening of federal fishing restrictions; to save their livelihoods, they abandoned their wholesale markets and sold other, less popular species directly to their community.

CSFs are the first “building blocks for a community to take more control over the [seafood] supply chain,” says Brett Tolley, who comes from a four-generation commercial fishing family and is now a community organizer for the advocacy organization, the Northwest Atlantic Marine Alliance (NAMA).

Falling into step, schools and other institutions have a huge role yet to play, notes Tolley. He says he’s starting to see a shift “toward institutions paying fair price and committing to buying a large volume collectively from many smaller, independent businesses.” It’s a change that “stands to make an enormous, game-changing difference to family fishermen and fishing communities, who are right now struggling to survive.”

For fishermen often unable to find a domestic market for their product, the benefits of the local support from boat-to-school programs cannot be overstated. Koepf says he’s looked for outlets for his herring for years—without success—and so he had been selling it exclusively to Japan until Alan Lovewell approached him about Real Good Fish.

Koepf’s story echoes big picture statistics. The U.S. imports 91 percent of its seafood and selling a third of its domestic catch abroad. This global conundrum arises not from a lack of domestic fish—the U.S. successfully adopted stronger fishing regulations in recent years, with healthier fisheries as a result—but rather from our domestic market’s taste for a select few species. Remarkably, shrimp, canned tuna and salmon accounted for 55 percent of all seafood consumed in the U.S.

Companies like Real Good Fish have their work cut out for them, therefore, to introduce new species to students and their members. “We really want children to engage and make that connection between their lunch and the natural world,” says Maria Finn, Real Good Fish’s marketing director. “And we really want our members to be aware that there are seasons in seafood,” she continues. “There are things that have an impact. For instance, if it’s stormy out, they’re probably going to get oysters, clams, or abalone because fishermen can’t go out in the ocean.” 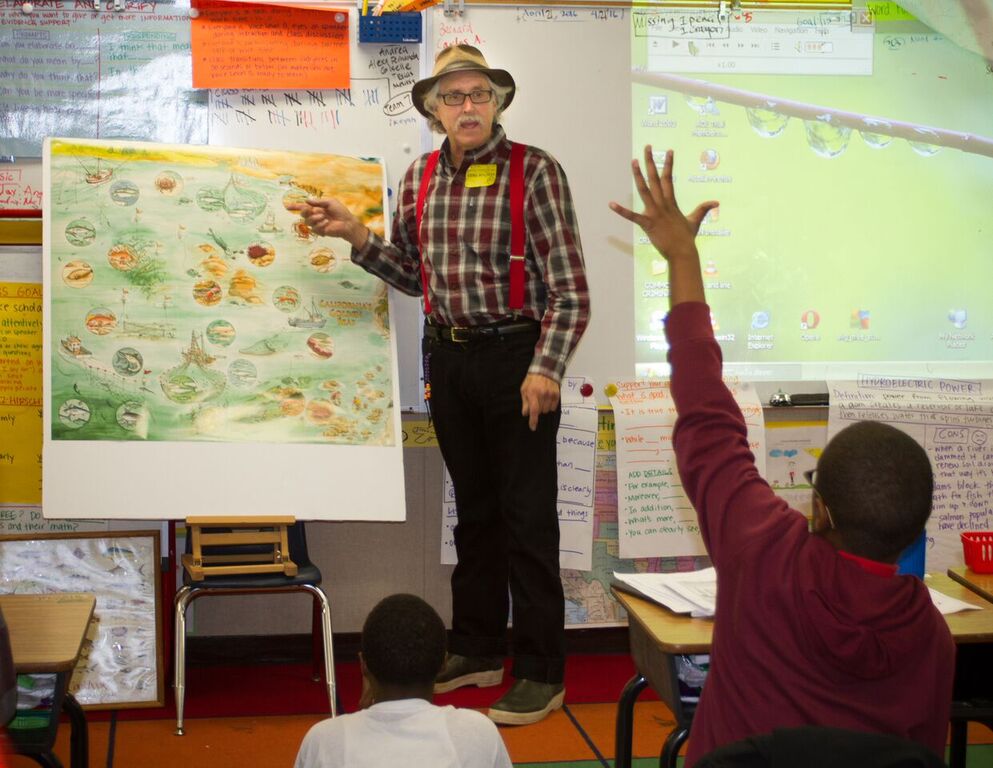 Boat-to-School Programs in Oregon and Massachusetts

Organizations in other states have followed in Real Good Fish’s footsteps. In Oregon, the Seaside School District is piloting a yearlong boat-to-school program run by the Oregon Albacore Commission (OAC) and funded by a $15,000 farm-to-school education program grant from the Oregon Department of Education.

The curriculum kicked off this October, themed “salmon month,” and includes fieldtrips to a local hatchery, presentations from fishermen, taste tests, and even ingredients for a take-home dinner for families. Students will also explore crab, tuna, pink shrimp, and groundfish such as cod, flounder, halibut, and sole, based on the season

“This is an outlet for us as an industry to tell our story, to talk about the changes that we’ve made, the things that we’re doing right, and to allow children to try something that’s very close to home,” says the OAC’s Vice Chair Christa Swensson, who helped spearhead the grant and who also does marketing for Bornstein Seafood, another supplier and program funder.

In another state where fish is close to home, Deborah Jeffers, the director of Salem, Massachusetts’ Food and Nutrition Services, is sourcing local seafood by using federal funding. Once a week, Jeffers serves Salem high school students with local fish from the nearby Cape Ann Fresh Catch Fishery, which was one of the first CSFs started by the Gloucester Fishermen’s Wives Association back in 2008.

Jeffers plans to extend the program to the elementary school and provide local fish to all 3,800 students across the 12 schools in her district.

The Benefits and Challenges

For schools, supporting fishermen to catch otherwise unmarketable species can have unexpected cost-cutting benefits. For example, Lovewell convinced black cod fishermen to sell Real Good Fish grenadier, a fish they mostly throw back because, as Finn says, it “has zero markets—it’s really ugly.” For $5 per pound however, the mild, flaky white fish is perfect for fish tacos in schools.

“This is a lesson farm-to-school advocates learned in the apple industry: People started selling cider apples, the really small ones, to schools because they were perfect for little kids,” says Simca Horwitz, the Eastern Massachusetts director for the Massachusetts Farm to School project, reflecting on similar uses of underutilized, abundant fish in east coast schools. “In a lot of ways, schools turning to local seafood today is where we were with land-based agriculture about 10 years ago.”

While all three boat-to-school programs have received strong enthusiasm from students, cost and distribution issues often stress the programs. On the supply side, Real Good Fish now uses a third-party distributor so schools don’t have to coordinate with multiple vendors. But this makes the program almost cost-prohibitive for the company. To help fund the effort, Real Good Fish’s CSF members now have the option to add $1.25 per week to support a school lunch.

Food Services Director Deborah Jeffers in Salem also confirms her costs per portion are higher when she serves fish, but she uses the commodities provided by four U.S. Department of Agriculture lunch programs to supplement the effort.

In a similar strategy, the Oakland Unified School District’s farm-to-school supervisor Alexandra Emmott supplements some of the meal’s protein requirement—a standard of the National School Lunch Program—with a side of rice and beans—in order to serve small portions of fish.

Both Jeffers and Emmott have had to train cooks and cope with the under-resourced kitchens in their districts as well. The entire district serves over 30,000 lunches per day, and many of the kitchens aren’t equipped to prepare food from scratch, let alone de-bone hundreds of pounds of fish.

The question of location is another big one. “I’m lucky, right down the road, we have Gloucester fishermen!” explains Jeffers. “But anyone who is in the center of the state, maybe they have it easier for farms, but where are they going to get their fish? It’s going to have to be delivered to them and maybe frozen.”

Brett Tolley of NAMA has a more optimistic viewpoint. It makes sense boat-to-school programs are piloted near the coast because it’s such a new model, he says. But there’s also a tremendous opportunity to match institutions’ need for healthy proteins with domestically caught fish.

NAMA collaborates with organizations like the Real Food Challenge, Sea to Table, and Health Care Without Harm, which are pioneering the way for institutions to buy large amounts of seafood while still holding suppliers accountable for ecologically sustainable practices.

“Institutions that are more inland and landlocked have been, in many ways, the most vulnerable to being exploited by the industrial seafood system,” Tolley adds. “They only get the fish that has been frozen three times over and traveled thousands and thousands of miles. It’s especially important that we can focus on those institutions.”