10 of the Most Sustainable Coffee Businesses in the United States 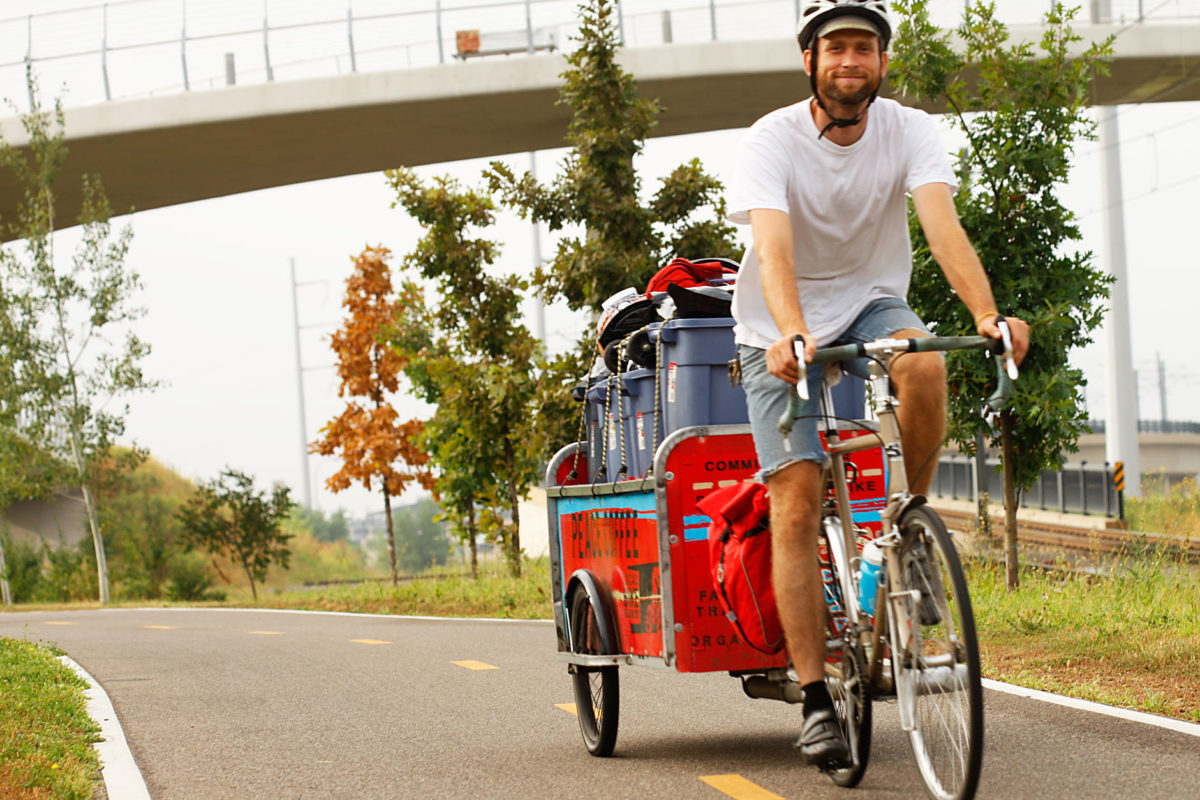 While most specialty coffee pros obsess over the transformative quality of the world’s favorite drupe, it’s not every day you find a roasting brand equally focused on the environment. And yet some forward-thinking coffee roasters and retailers are asking what they can do to reduce their carbon footprint—for good reason.

Experts tell us that climate change is already beginning to have a substantial impact on the coffee-producing regions of the world. As temperatures rise and weather patterns change, existing coffee lands could decrease in size by as much as 50 percent over the next three decades, say organizations such as Conservation International. As coffee farms move up mountains to escape rising temperatures, the resulting deforestation could exacerbate the problem even more.

Ironically, coffee is one of a number of industries that are aggravating the problem by producing large quantities of greenhouse gas (GHG). A 2012 study that followed coffee from Costa Rica to Europe, showed that 53 percent of GHGs produced by the coffee industry occur on the roaster side, in cafes, through activities such as heating water, turning on the lights, and producing waste in the form of to-go materials.

“It replicates a global issue related to climate change,” Hanna Neuschwander of World Coffee Research told Civil Eats over email. “Coffee drinkers generate the most CO2, and coffee farmers pay the highest price for it.”

Reversing the trend isn’t easy. A coffee business’ ability to switch to renewable energy such as wind and solar depends largely on its geographic location and factors like local infrastructure and the political climate of state government.

Here, in no particular order, are 10 U.S. roasters and retailers that are overcoming obstacles to curb carbon emissions, offset energy use, cut down on waste, and help farmers mitigate the existing damages associated with climate change. 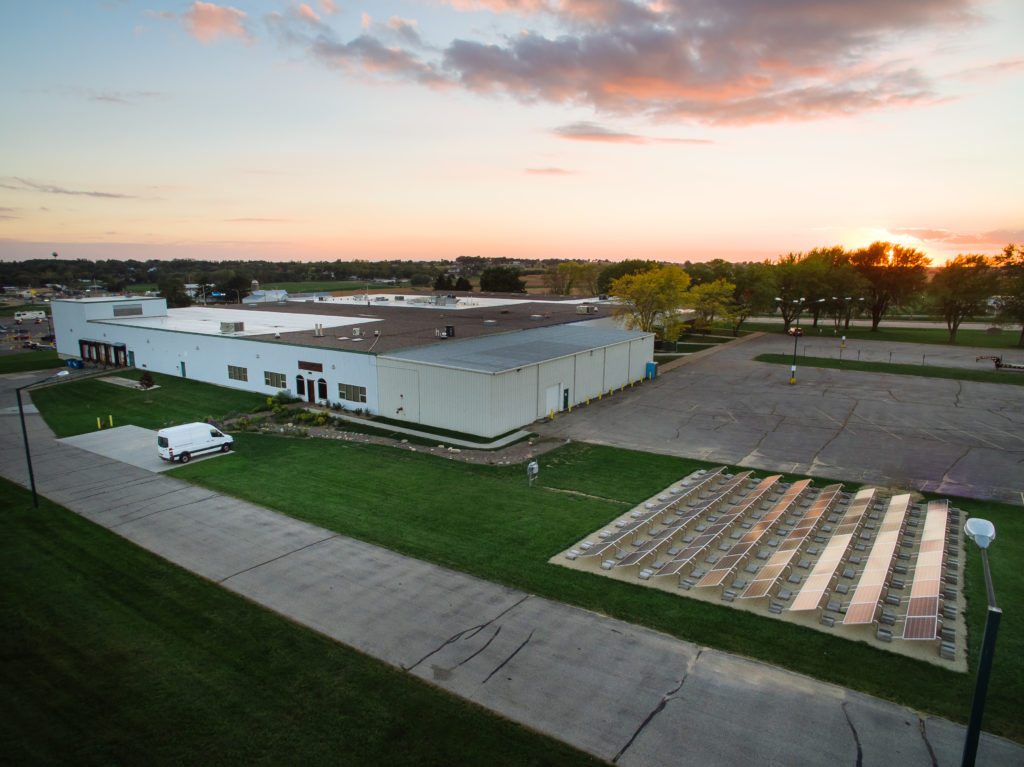 In 2015, Kickapoo Coffee Roasters, based in the southwestern Wisconsin town of Viroqua, took advantage of a federal grant offering a 30 percent tax break to convert its roasting facility to solar power. With a new 80-panel solar array installed and hooked up to the local grid, the company achieves a balance over the course of the year and covers 100 percent of its electricity usage with solar power. For taking advantage of the program, the company received a $25,000 tax credit this year.

“If we were a publicly-traded corporation, and we did not pursue this, we would be fired for not maximizing shareholder profits,” says Co-owner TJ Semanchin. “It’s that much of a no-brainer in terms of return on investment.”


While the actual roasting machine still relies on natural gas, and their new Milwaukee cafe runs on the city’s conventional power, Semanchin says they’ve made other, smaller changes that go a long way, like switching to LED lights and turning the espresso machine off at night.

Kickapoo is also a longtime member of Cooperative Coffees, an importing group of 23 independent roasters throughout the U.S. and Canada that sources fair trade and organic coffee from producer cooperatives across the globe. 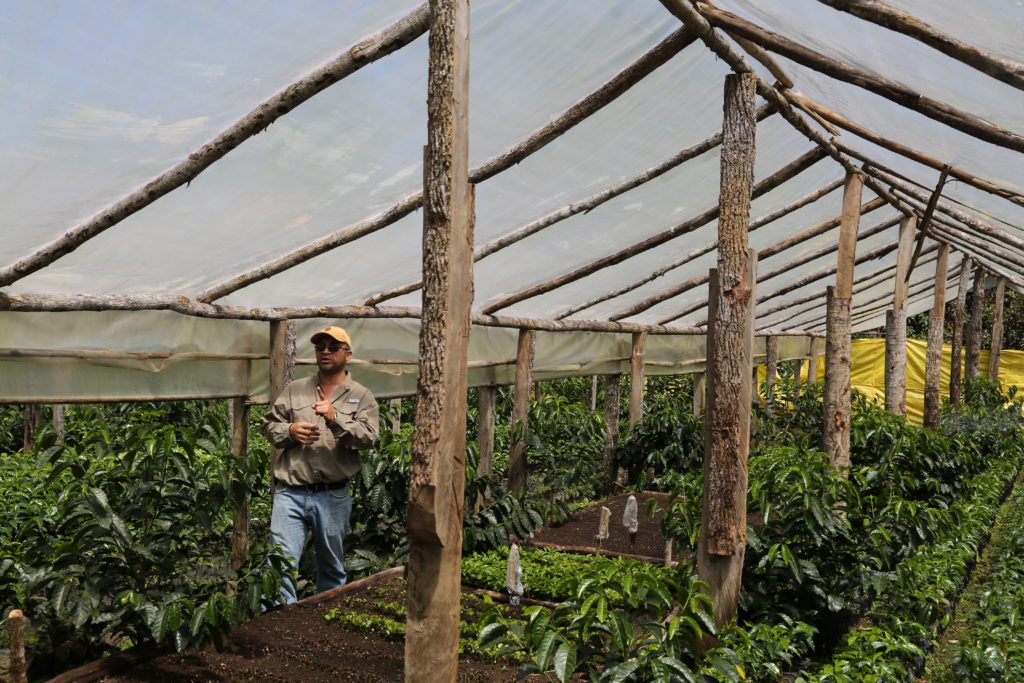 Operating under the adage, “You can’t manage what you don’t measure,” Counter Culture Coffee publishes an annual sustainability report that tracks emissions from roasting, electricity, and air travel.

The idea of going solar to help offset climate impact was not as attractive for Counter Culture as it was for Kickapoo in Wisconsin. “In North Carolina, tax incentives, refunds, rebates [for solar power] are not good,” says Sustainability Manager Meredith Taylor. Instead, Counter Culture buys wind-energy credits from Arcadia Power to help account for the electricity usage at their roasting and training facilities.

The company offsets additional carbon emissions (most of which are from shipping) by buying carbon credits managed by the AMBIO conservationist cooperative in Chiapas, Mexico. The roaster also added a second location in Emeryville, California last year to cut down on long-haul shipments to its 44 West Coast wholesale clients.


At the forefront of environmental sustainability, Portland Roasting Coffee built their energy-conscientious reputation by championing the Specialty Coffee Association of America’s START program, a comprehensive corporate-grade software used to track energy usage on a per-pound basis.

Portland Roasting has used this program to record impact metrics related to the coffee’s life within U.S. borders, from the moment it enters the U.S. port of call in its raw, green form to the moment roasted coffee lands at nationwide wholesale accounts. It also tracks many of the details in between, including daily employee transportation to and from work. It uses the results to determine how many carbon offsets it must purchase, and to great effect—Coffee Director Nathanael May says the company has been carbon neutral every year since it began gathering data in 2007.

Additionally, five years ago, the company established a bicycle delivery program in Portland to deliver coffee from the roasting facility to its sellers. Since the program’s inception, the company has delivered more than half a million pounds of roasted coffee throughout the city. It offsets emissions it can’t avoid via bicycle through a partnership with D.C. non-profit Trees For The Future, which plants trees in drought-prone Sub-Saharan Africa to promote permaculture, protect against soil erosion, and alleviate poverty. Portland Roasting paid to have 10,000 trees planted (at 10 cents per tree) in 2014.

This year, the company will open three new cafes at Portland International Airport. May sees the expansion as an important opportunity. “It is actually providing us with the challenge to figure out how we can reduce our emissions in other areas and then mitigate other emissions by tree planting and carbon offsets,” he says.


Lincoln Fowler and company opened Colectivo Coffee under the name Alterra in 1993 and quickly built a reputation for energy efficiency. In the early 2000’s, when the concept was still novel, the company took advantage of a Green Power Purchasing Program offered by the City of Milwaukee and began sourcing 100 percent of its electricity from renewable energy. With all five cafes running on green energy in 2004, Alterra received national recognition from the United States Environmental Protection Agency alongside organizations such as Whole Foods and Johnson & Johnson.

Taken by the quality and green-minded reputation of Alterra, Mars Drinks invested in the company in 2010, co-opting the small business’ name to expand its Flavia line, its answer to single-use Keurig K-Cup pods. After three years, the founders regained their independence by selling their original name to Mars and rebranding as Colectivo, a name referring to the category of bus transportation often used by Central America’s working class. On the streets of Milwaukee, the transition amounted to little more than a name change and separation from the automated, single-serve world.

Today, Colectivo runs 16 cafes in Wisconsin, many of which boast efficient HVAC systems with pressure sensors that circulate the desired temperature of air depending on the time of year. Fowler designed a timing circuit for the roast exhaust incinerator that ensures the flame only burns when necessary, conserving natural gas. This fall, Colectivo opens its first café in Chicago. 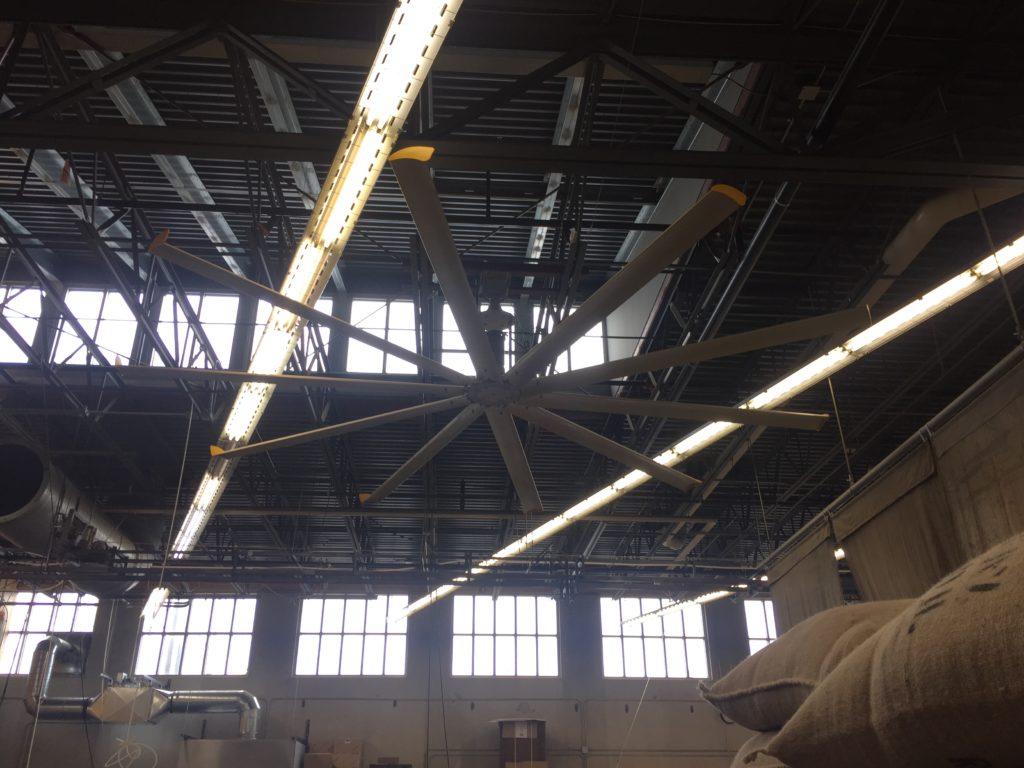 
As California’s first coffee company to become a certified B Corporation, Equator Coffee & Teas has proven its mettle for conscientious business relationships that consider both the environment and the livelihood of its partners across the supply chain. The company roasts on an energy-efficient Loring roaster in San Rafael, California, and at origin they’ve introduced clean-burning stoves in “eco-friendly” worker quarters located on their proprietary farm in Panama.

In May, this San Rafael business with LGBT-ownership won California’s Small Business of the Year award. French Laundry Chef Thomas Keller, who carries a unique blend of Equator Coffee at his Napa Valley restaurant, praises the company as being “committed to transparency and empowerment initiatives at every step of the supply chain.”

Based in Raleigh, Larry’s Coffee is another founding member of Cooperative Coffees. The roaster building itself is a model of sustainable efficiency; as a B Corporation like Equator, its environmental score on the B Corp Impact Assessment, which measures companies’ social and environmental impact, is 38 out of 100 (the median score is 7).

Five water-collecting cisterns provide water to the roasting facility’s bathrooms and garden. Natural daylight also fills the building, cutting down on heating costs. And onsite composting provides soil amendment for the garden. Additionally, Larry’s makes all local deliveries with a van that runs on biodiesel fuel ‘brewed’ at nearby Piedmont Biofuels. 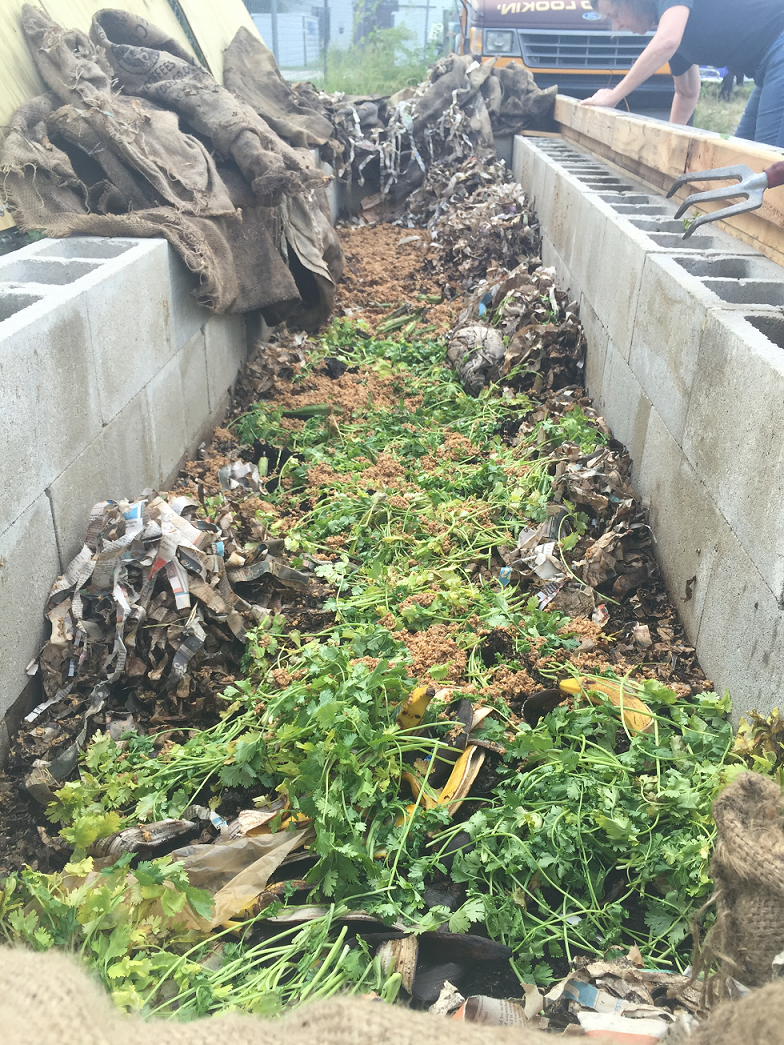 Also a member of Cooperative Coffees, Minneapolis-based Peace Coffee is a non-profit owned by the Institute for Agriculture and Trade Policy, an organization that works to ensure fair and sustainable food, farm, and trade systems. The company has delivered coffee locally by bicycle since 1998, and its home office of 15 years is an eco-friendly building with solar panels, geothermal heating, and a rooftop garden. 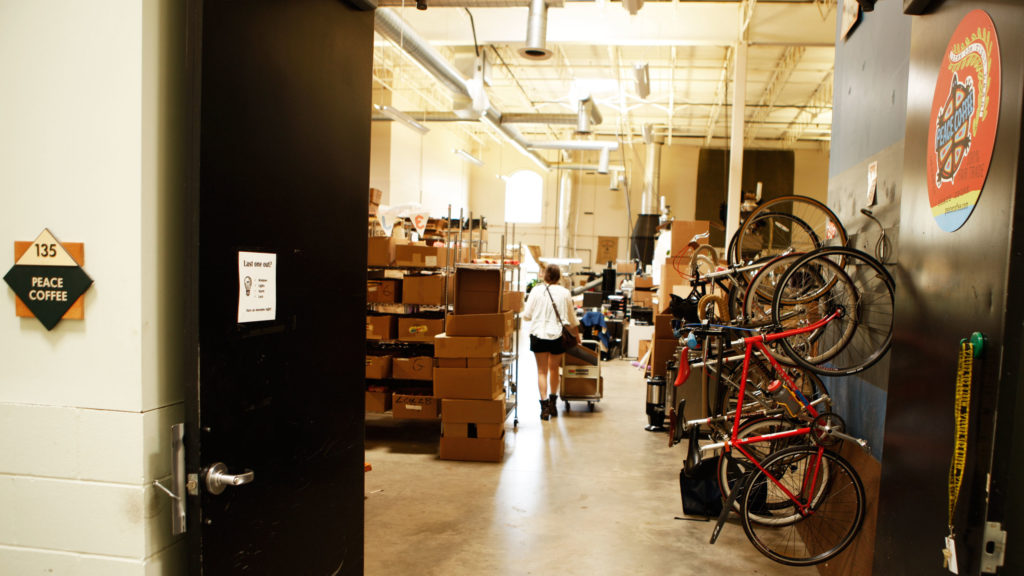 In 2014, Peace became one of Minnesota’s first public-benefit corporations, or corporations that prioritize public interest in addition to, and sometimes over, pursuit of maximum profit. This year it promises  to purchase over 1 million pounds of fair trade and organic coffee. By comparison Counter Culture, which also distributes outside of its home state, sourced just under 1.8 million pounds of certified organic coffee in 2015. 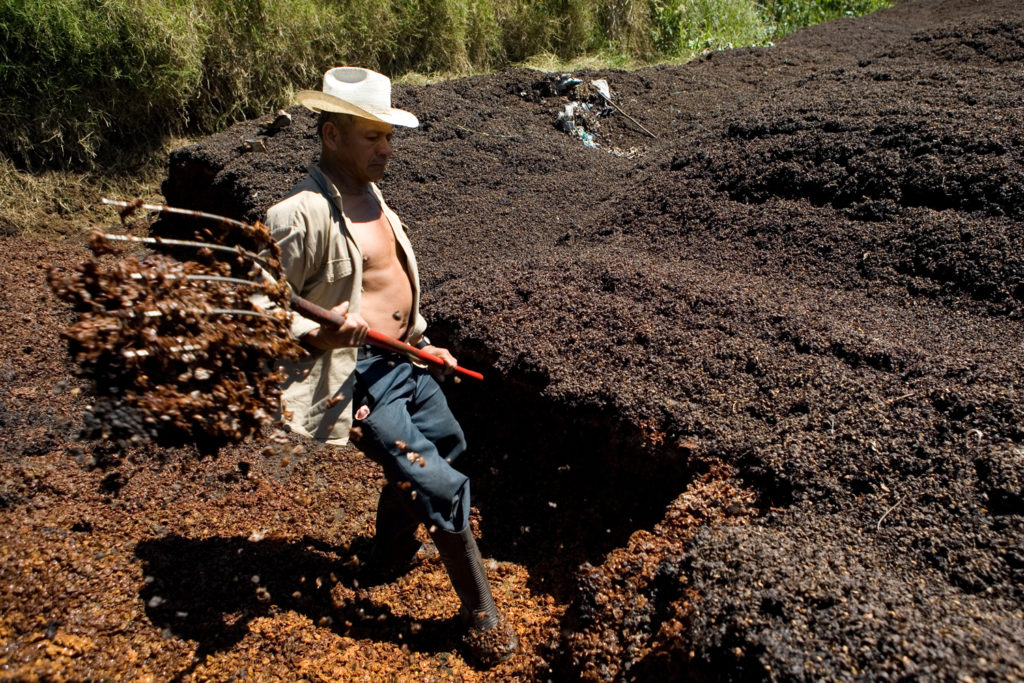 Named for what translates to “Mother Earth” in indigenous Andean culture, Pachamama Coffee Cooperative brands itself as 100 percent farmer-owned. The Sacramento-based company works with five cooperatives in Mexico, Guatemala, Nicaragua, Peru, and Ethiopia, each of which has a member on the company’s board of directors. Together, they produce 100 percent certified-organic coffee (here’s more about the climate benefits of organic farming). Pachamama distinguishes itself by listing the by-the-pound price breakdown, which lists the cost of each stop along the supply chain, an unparalleled level of price transparency for businesses operating in the States. 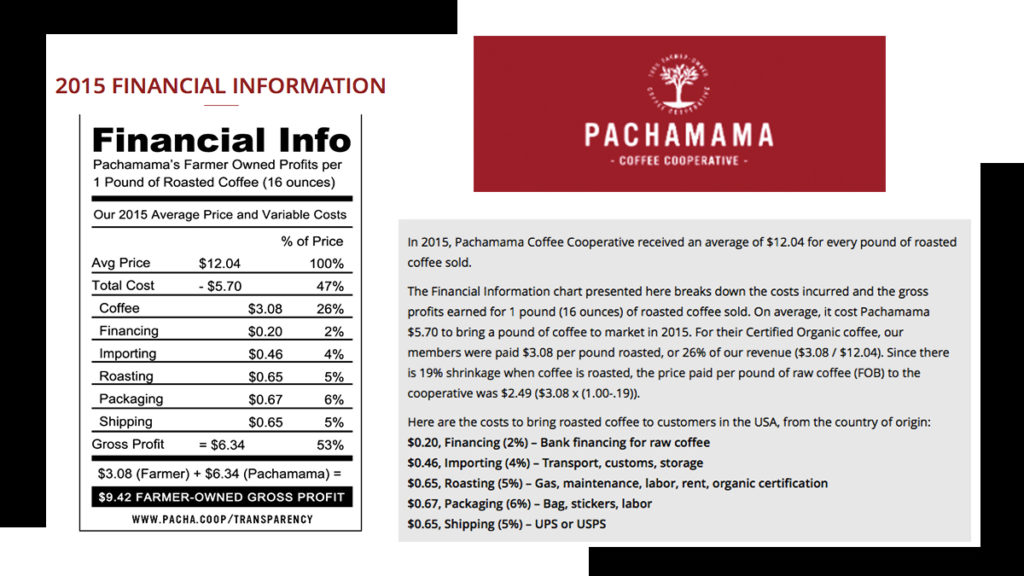 The first coffee business in the country to become CarbonFree Certified, all of the greenhouse gas emissions associated with coffee production for Grounds for Change is offset through credits in the CarbonFund. Along with Counter Culture, it is the only the company on the list to participate in formal carbon markets.

In addition to the carbon-free certification, the company purchases 100 percent renewable electricity generated by wind, solar power, and biomass. As members of the 1% For the Planet Program, Grounds For Change donates 1 percent of total sales to environmental organizations, such as the Seattle Audubon Society (promoting a healthy habitat for birds), Save Our Wild Salmon (an effort to restore wild salmon to the Pacific Northwest), and EcoTeach (a conservationist foundation in Costa Rica). One hundred percent of Grounds for Change coffee is certified organic and fair trade.

While some in the core coffee community have been apprehensive about the global firm JAB Holding Company acquiring the esteemed coffee brand in 2012, Peet’s roasts 100 percent of its coffee in the first LEED ® Gold-certified roasting facility in the nation, located in Alameda, California.

Perhaps more notable, however, is Peet’s recent donation of $250,000 to build a center housing the University of California, Davis’ fledgling coffee program. Complete with a pilot roastery, the Coffee Center is a big step in developing the science needed to learn more about the coffee plant and its bean’s organoleptic properties. A more nuanced understanding of coffee’s different value propositions could prove crucial to the crop’s resilience and may provide more clarity for farmers looking to mitigate and adapt to the effects of climate change.

In the spring, the U.C. Davis program will offer a course entitled “Just Coffee: The Biology, Ecology, and Socio-economic Impacts of the World’s Favorite Drink,” which will be taught by soil health researcher Kate Polakiewicz.