Pittsburgh is in the midst of a foodie renaissance, and yet many there struggle with food insecurity. 412 Food Rescue wants to balance the equation by rescuing unwanted food all over the city and giving it to hungry residents. 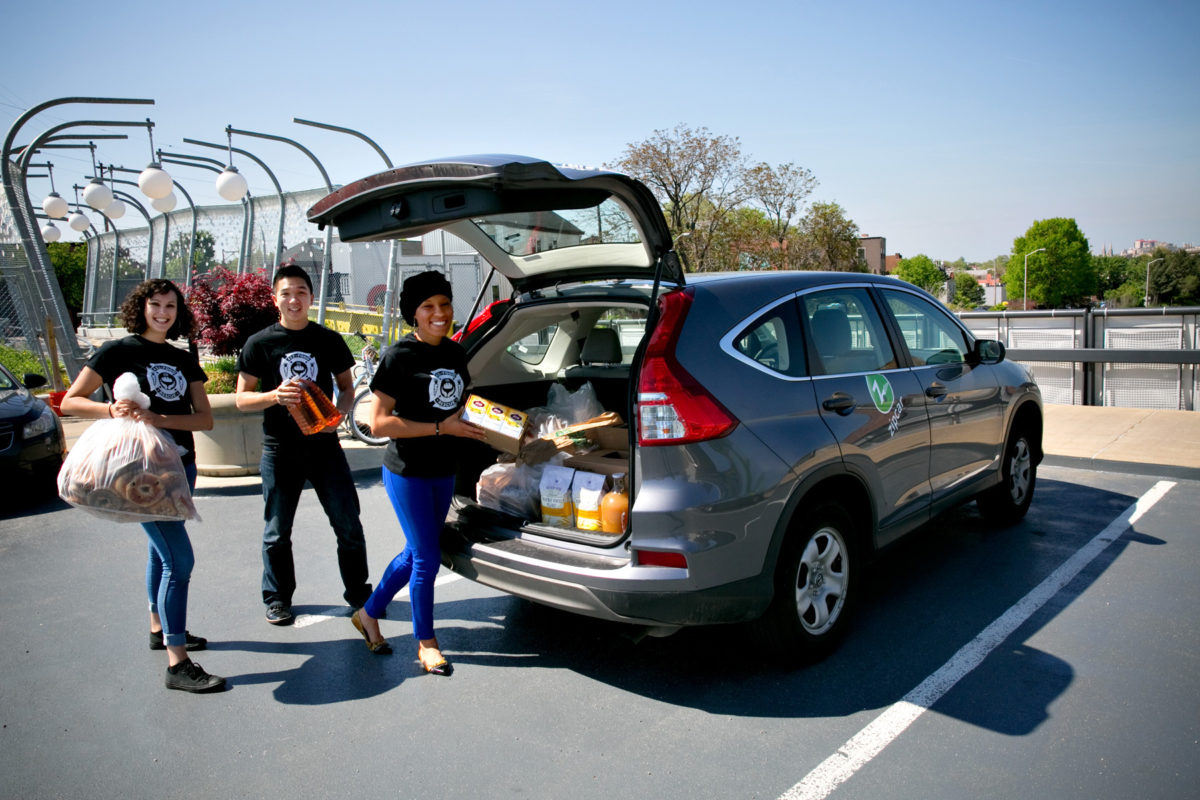 On a Wednesday night in Pittsburgh’s East Liberty neighborhood, Warren Wilson is eating a Twinkie.

Wilson says when he has the means to, he tries to eat “less meat, less processed foods, more organic foods.” He prefers what he calls “living foods: fruits, vegetables, things that come from the ground.” But lately, his budget hasn’t made that possible.

An educator with a two college degrees, Wilson has spent the last six years unsuccessfully looking for a job. In the past month, his situation has become especially dire.

He keeps a strict food budget of $10 per day. On this particular Wednesday, it’s $3. His face glows as he talks about his economic prowess: He found three bags of cheese curls at the corner store for a dollar, and a rare CVS deal that resulted in two-for-a-dollar Reese’s Peanut Butter Cups. After 9:00 p.m., he knows of a pizza parlor on the corner that serves slices for a dollar. Other than the time Wilson spends in the library combing job boards, much of his day revolves around food—searching, finding, buying. He talks about food in the way that many addicts talk about drugs.

But, this food-friendly city also has a hunger problem. And, due to its hilly topography and lack of convenient public transportation options, nearly half of Pittsburgh residents live in areas designated as “food deserts.” According to Feeding America, 170,000 people in Allegheny County are food insecure, 43,000 of whom are children.

One solution comes from 412 Food Rescue, a food recovery organization named for the city’s area code and co-founded by Leah Lizarondo. A native of the Philippines, Lizarondo grew up in Manila and moved to Brooklyn to work with a technology company in 1997. In 2001, she moved to Pittsburgh to get a Master’s at Carnegie Mellon. At first, she wasn’t crazy about the city, and she moved back to Brooklyn without attending graduation.

Then, in 2006, Lizarondo moved back to a very different Pittsburgh. Massive clean-up efforts had taken a hundred years of soot and coal dust off the buildings, and companies like Google and Uber had moved in, attracted by the cheap rent and proximity to technology hub Carnegie-Mellon.

Lizarondo became the CEO of Dress for Success, an organization that empowers women by providing professional attire, support networks, and development tools. She also started a weekly food column in Pittsburgh Magazine.

Pittsburgh isn’t huge—locals call it “a little town that plays a big city on TV”—and so people with similar interests eventually find each other. While writing, Lizarondo ran into Gisele Fetterman, founder of a non-profit in Pittsburgh’s Braddock neighborhood called the Free Store, which redistributes surplus and donated goods to communities in need. One of Fetterman’s donors was Costco, which would donate surplus food as long as she could pick it up. 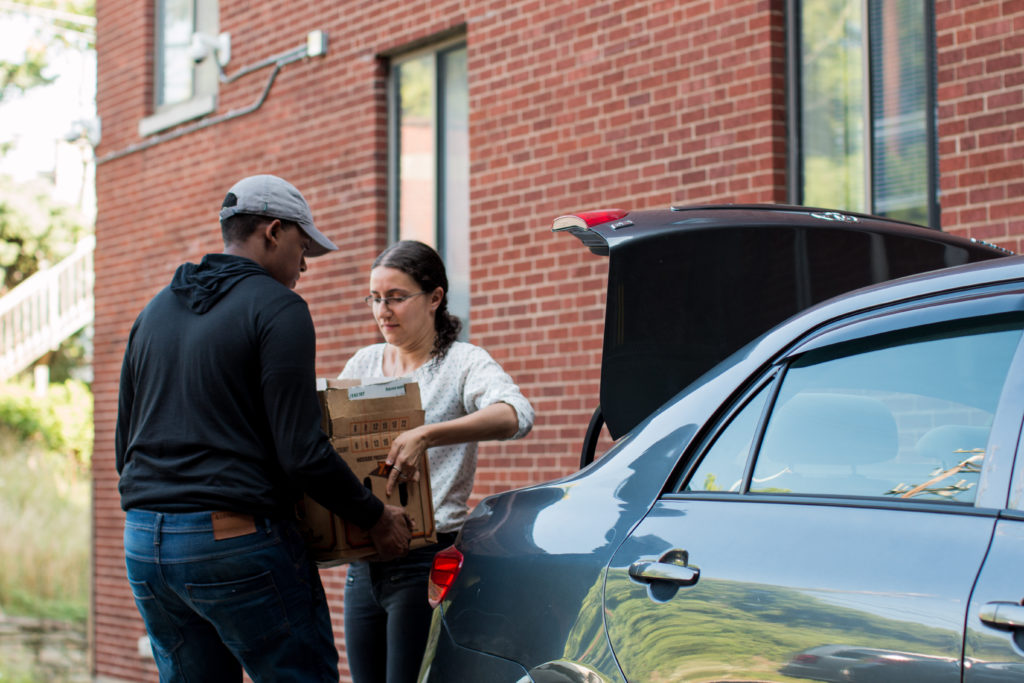 Through her work on her column, Lizarondo became aware of just how much food gets wasted in the U.S. (40 percent) and she decided to do something about it while getting fresh food to those who need it most. By applying the Free Store’s model to food recovery, she saw an opportunity to solve a logistical problem within her community. Together, Lizarondo and Fetterman co-founded the non-profit 412 Food Rescue to distribute excess food to hungry people throughout the city.

The oldest food recovery organization in the country, New York City-based City Harvest, uses trucks to pick up donated food and holds it in warehouses. Many food recovery organizations across the country emulate that model. But although 412 Food Rescue recently acquired a small refrigerated truck for highly perishable items, their model relies on a large network of 750 individual volunteers, much like the new crop of tech-driven companies around the nation that are finding ways to simultaneously reduce food waste and feed the food insecure.

Making a very common comparison in the tech world, Lizarondo says, 412 Food Rescue is, “like Uber, but your passenger is a sack of potatoes,” Lizarondo says. A volunteer simply opens the app, accepts a delivery, and then uses his or her own vehicle to pick up food from a store or restaurant. 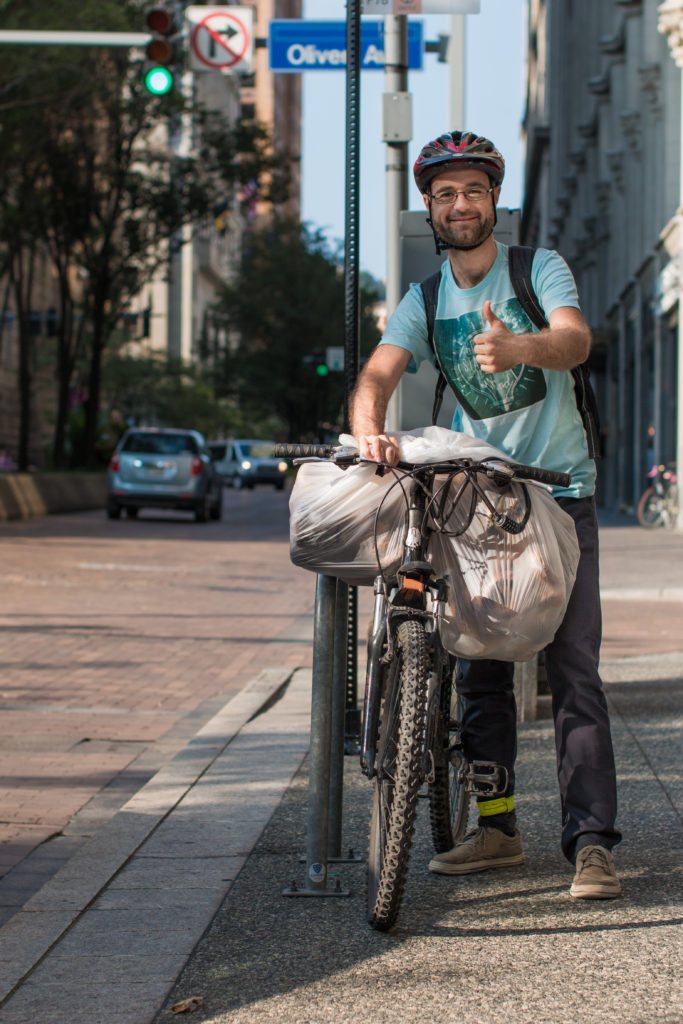 The model doesn’t save huge quantities of food at a time—a few boxes of produce here, a trunk full of baked goods there, picked up by individual drivers from any one of the organization’s 150 donors—but all that food adds up. Since March 2015, 412 Food Rescue has rescued over 700,000 pounds of food. In August, their biggest month ever, the organization and its volunteers rescued 90,000 pounds. They hope to hit a million by the end of the year.

This summer, the organization also worked with a local farm alliance to launch a pilot version of the region’s first “ugly produce” CSA.

Lizarondo’s technology background familiarized her with a network term known as “the last mile,” which refers to the last bit of connection between a hub and a consumer. Take Amazon: they build a central warehouse, the hub, but it’s useless if their products can’t move from the warehouse to the customer. The final step in every transfer, that’s the last mile. And that’s where she wants to see the food recovery movement grow—to ensure that people like Warren Wilson don’t go hungry.

“I come from a Third World country, and it’s shocking to see that there’s so much hunger still in a developed country,” Lizarondo says. “How can we solve this problem? By rescuing perfectly viable food.”