Brewing up a Local, Sustainable Cup of Tea | Civil Eats

Brewing up a Local, Sustainable Cup of Tea 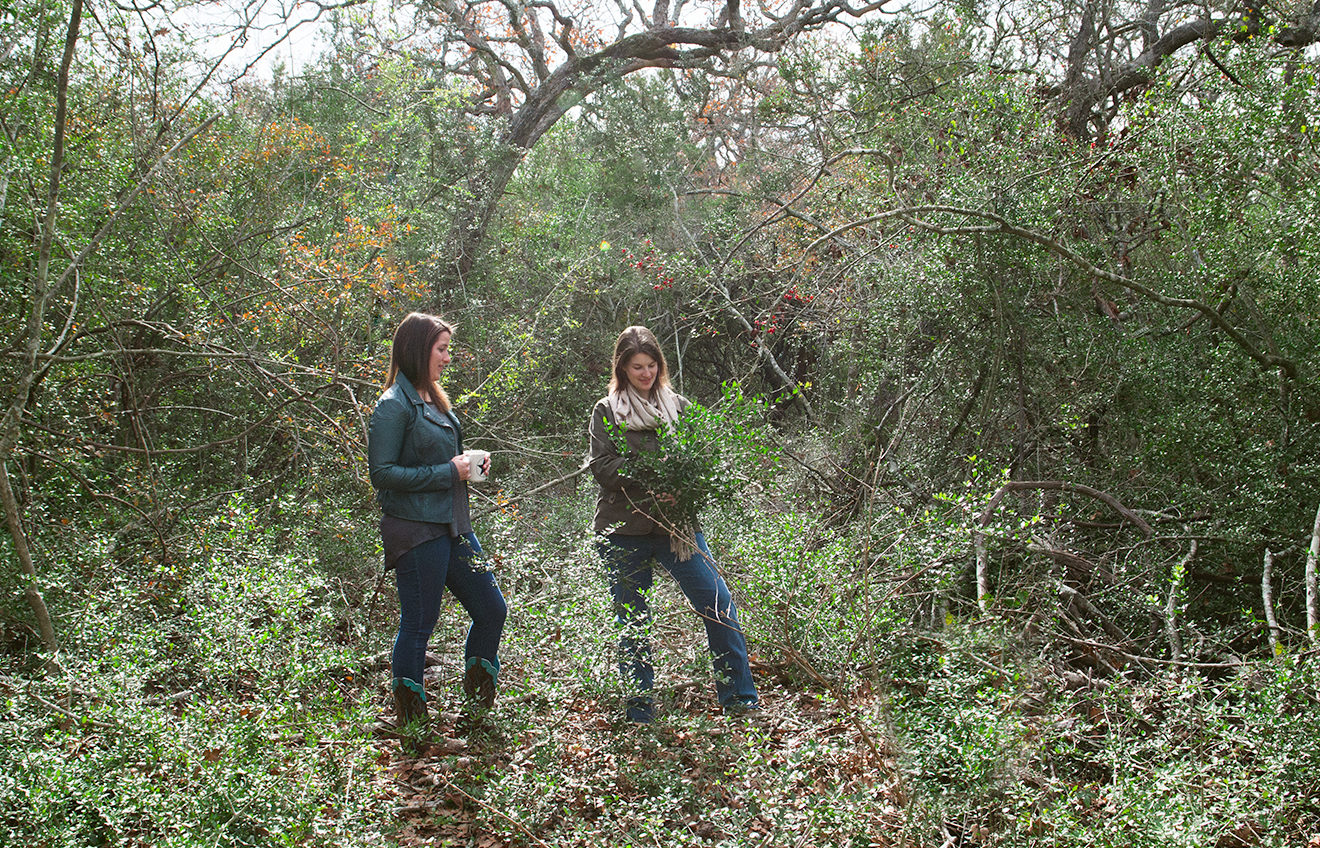 Your morning tea—Matcha, Darjeeling, English Breakfast—most likely comes from far away. While there are a few dozen tea growers in the United States, the harvested leaves, many of which come from an evergreen shrub called Camellia sinensis, are not native to this country.

But over the last few years, a wild-growing, indigenous plant that is both drought resistant and blessedly caffeinated has been rediscovered in the American South. It’s called yaupon, and a number of businesses striving for social and environmental sustainability have cropped up around it.

JennaDee Detro of CatSpring Yaupon Tea grew up around the evergreen shrub, but only noticed it after seeing it thrive in a drought on her parents’ ranch in Cat Spring, Texas. After conducting research, she discovered the spiky shrub was the only species of North American holly known to contain caffeine and that it had a long, albeit mostly forgotten, history of being used to make tea.

Detro and her sister Abianne Falla perfected a yaupon tea-making process, founded CatSpring Yaupon in 2011, and looked for ways to have a positive impact on their rural community. They developed a hiring practice that collaborates with local probation officers to engage workers with past convictions; Detro refers to it as “first-rung employment.” Others might call it a second chance. 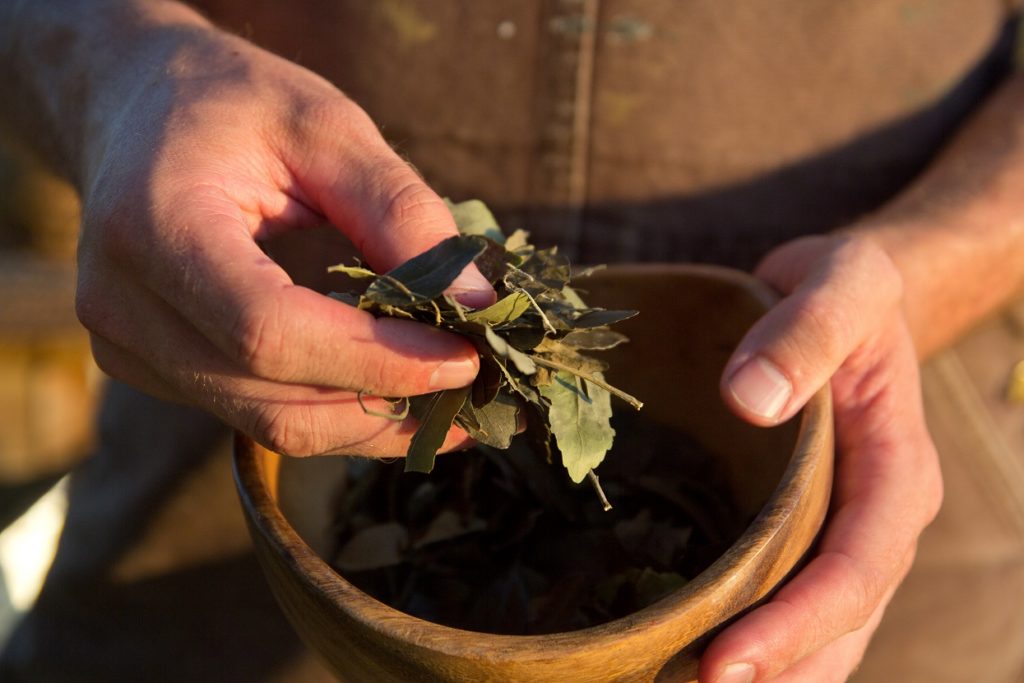 Falla sees similarities between company employees and the yaupon plant itself. “It was seen as a nuisance, and landowners were clearing it for cattle or hay,” she says of the plant. “So many of these individuals have been written off by society.” Though picking yaupon is hard work, it offers a physical reward at the end of the day—a tangible product, and a paycheck.

Many of the tea companies that have sprung up over the last few years around the rediscovered tea plant share a similar commitment to doing social and environmental good. ASi Yaupon Tea (pronounced “ah-see yo-ponn”), founded in Georgia by Lou Thomann in 2010, also strives to provide flexible hours and respectable pay to its employees. And Yaupon Brothers American Tea Company, founded in Florida by brothers Bryon and Kyle White in 2012, aims to promote sustainable environmental practices. 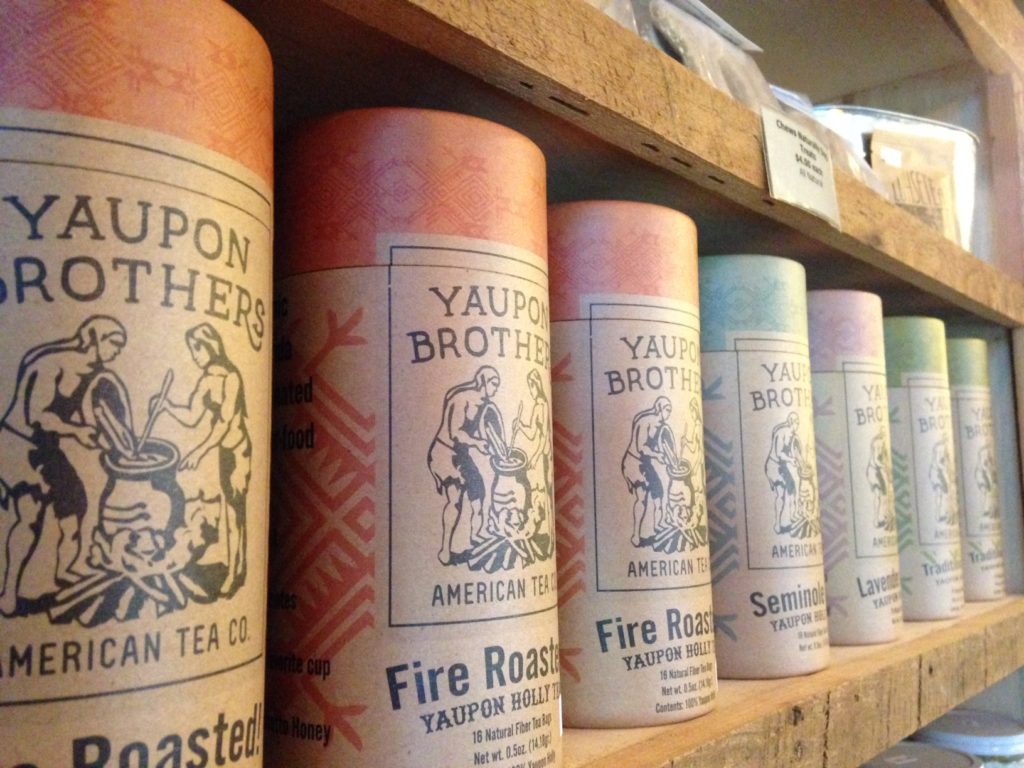 As these tea companies find their footing and grow, selling online and at specialty shops around the country, they prioritize goals like offering flexible employment, revitalizing rural economies, and promoting better land management practices.

The yaupon plant is a type of holly or ilex native to the Southern United States, from East Texas to coastal North Carolina. Its dark green, toothed, oblong leaves grow from a woody shrub, and it is a close relative of yerba mate, which is also in the holly family. Like the Camellia plant, the yaupon leaves can be made into both green and black tea depending on how oxidation, drying, and roasting are used in the process. 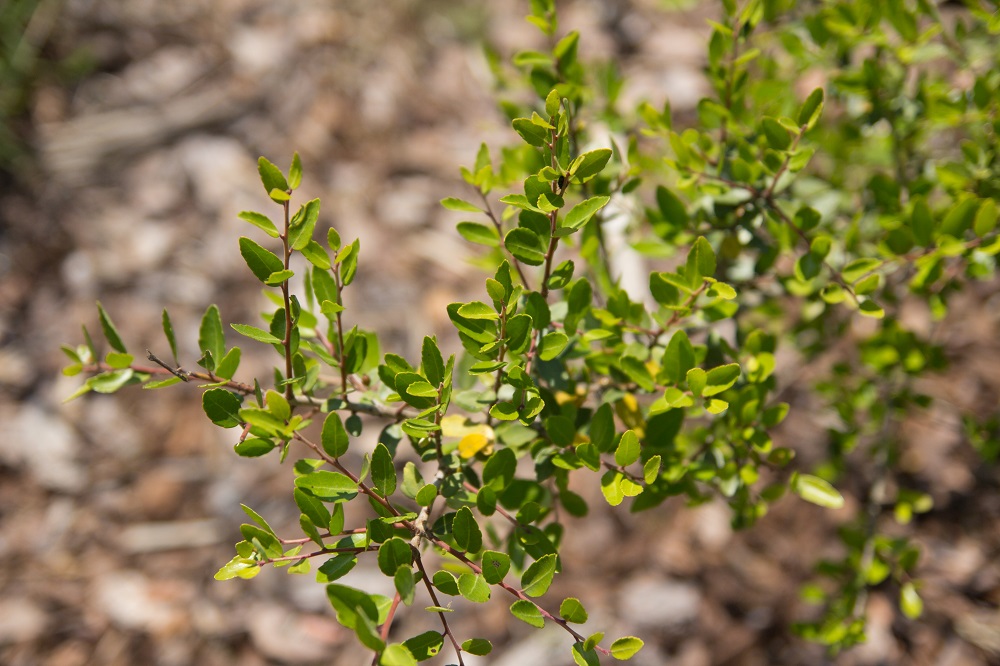 Scientists researching yaupon have found that it is rich in antioxidants (higher than blueberries) and, along with caffeine, it contains theobromine, a non-jittery stimulant also found in chocolate.

The Native Americans first discovered the plant’s uses around A.D. 1020. Tribes used it in ceremonial events, as a social drink, and in barter for goods and services, and many called it “black drink” or “cassina” (abbreviated to “asi”).

While much if not all of the various tribes’ history is oral, there are written records of explorers drinking asi with the native people and bringing it back from their journeys. In Black Drink, published in 1979, editor Charles M. Hudson wrote: “The Spanish colonists in Florida drank cassina perhaps as early as the sixteenth century, and subsequently it became very popular among them. They called it té del indio.”

Eventually, due to an increased presence of tea and coffee from outside North America, as well as the acculturation of native tribes into American society, yaupon vanished from use.

Five years after its founding, CatSpring Yaupon Tea has grown to a staff of about 15 people. While the company continues to produce and process the tea in Cat Spring, it has moved packaging operations to a facility 35 miles east in the town of Katy. The sisters hope employment with CatSpring, which offers people with prior convictions a flexible schedule, will one day help be a springboard to other jobs.

Integral to the success of CatSpring Yaupon Tea was a $250,000 U.S. Department of Agriculture Value-Added Producer Grant (VAPG) it received in 2015. The grant helps producers create new products or expand marketing for agriculture-based, value-added products. While the sisters have to match the grant by 50 percent, the award has been key to their expansion.

Former rice trader Lou Thomann of ASi Yaupon strives to do right by his employees as well. He has four full-time employees and about six pickers at a time. His workers range from Hispanic high school kids to “wood hippies” (his term for freewheeling nature lovers) to Millennials. “It’s flexible picking, like [driving for] Uber,” Thomann says. “They can pick when they want.” And the money is good. 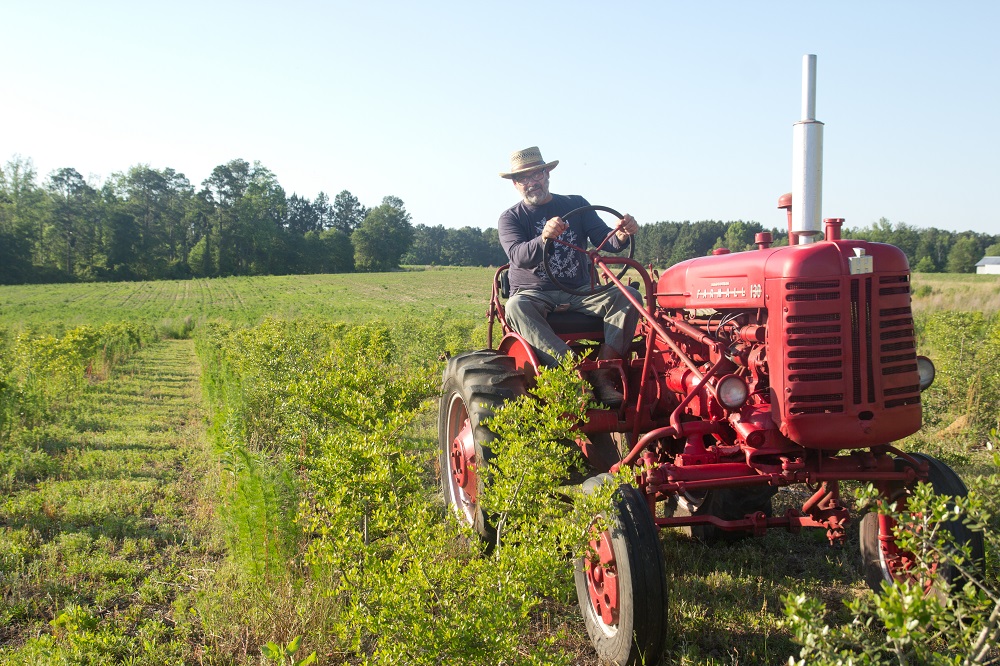 Elliot Day, an employee of ASi Yaupon, makes $20 an hour picking yaupon leaves. “I happened to have a friend that was doing some picking, and he invited me to come out, and we made a bit of money,” Day says. The 26-year-old perfected the process and now picks yaupon full-time. “I enjoy the product, what we stand for, and it’s enjoyable work—difficult, but I like it,” Day says.

Like CatSpring, ASi Yaupon was also awarded a USDA Value-Added Producers Grant and the company is well on its way to building out a yaupon empire, one that will celebrate the region’s diversity and history. “We have a really ambitious plan,” Thomann says, describing his company’s mission. The founder ticks off the metrics: a significantly lower carbon footprint—sourcing tea without a lot of miles—and celebrating local ingredients. In addition to the yaupon, his products incorporate Southern foods like pawpaw fruit, mayhaw, aronia berries, and muscadines.

While sales are nice, Thomann concerns himself more with the big picture. “We want to start an industry,” Thomann says. “Our fair wages are a big part of what we’re doing.”

The Yaupon Brothers, meanwhile, describe their core mission as more environmentally-focused. “We believe that yaupon holds the key to repairing and replacing damaging environmental practices, not just in Florida, but in the entire Southeast,” wrote co-founder Bryon White in an email. 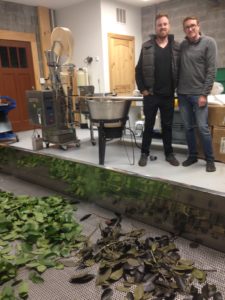 White sees Yaupon as a magic plant. It’s drought-tolerant, salt-tolerant, cold-hardy, and can grow in full sun or shade. “It doesn’t need much in the way of fertilizers or irrigation,” writes White, “and insects don’t normally eat yaupon, because the caffeine in its leaves acts as a natural pesticide.”

The White brothers are busy planting 10,000 yaupon shrubs on an organic farm in the Florida panhandle, and they plan to plant 10,000 more on their own property in New Smyrna Beach.

The tea company founders all report that they have tried every method of tea making, pulling from what’s been recorded in Native American history, traditional tea processes, and yerba mate and guayusa producers in order to find the one they think works best. What’s more difficult than perfecting the process, however, is figuring out how to educate American consumers about the new morning drink in town.

In her early yaupon days, she found little information online. “Now when I look, there is a lot more—more studies and archeological discoveries,” she says. “It’s really neat to be a part of rediscovering this plant.” 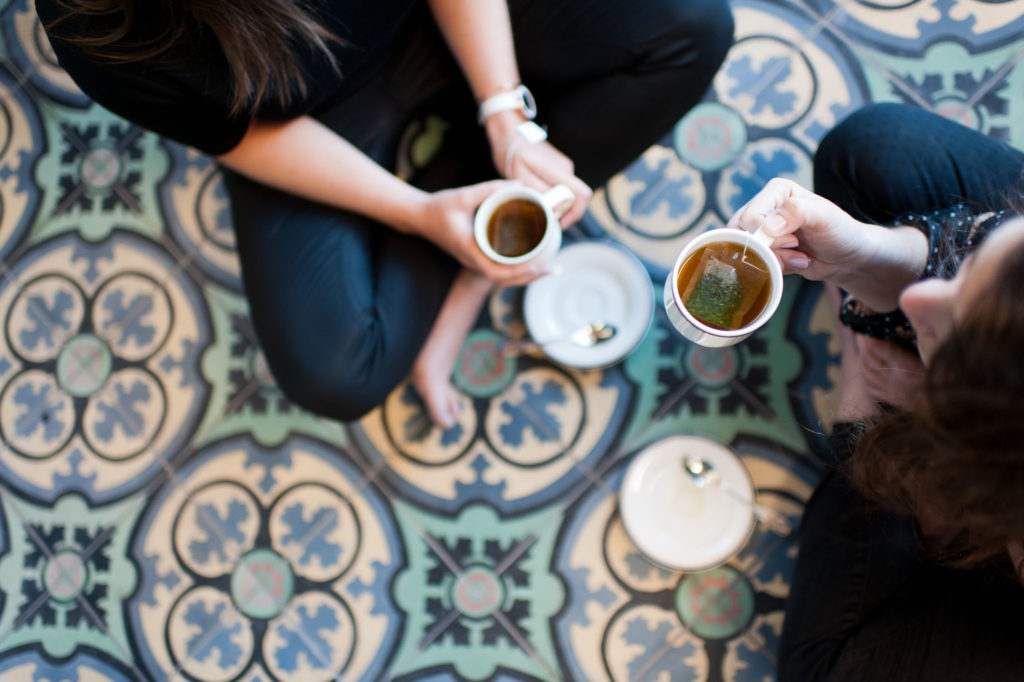