Is Puerto Rico the Next Sustainable Ag Hot Spot?

As the U.S. island territory faces a $70 billion debt crisis, some advocates see sustainable farming as one potential solution. 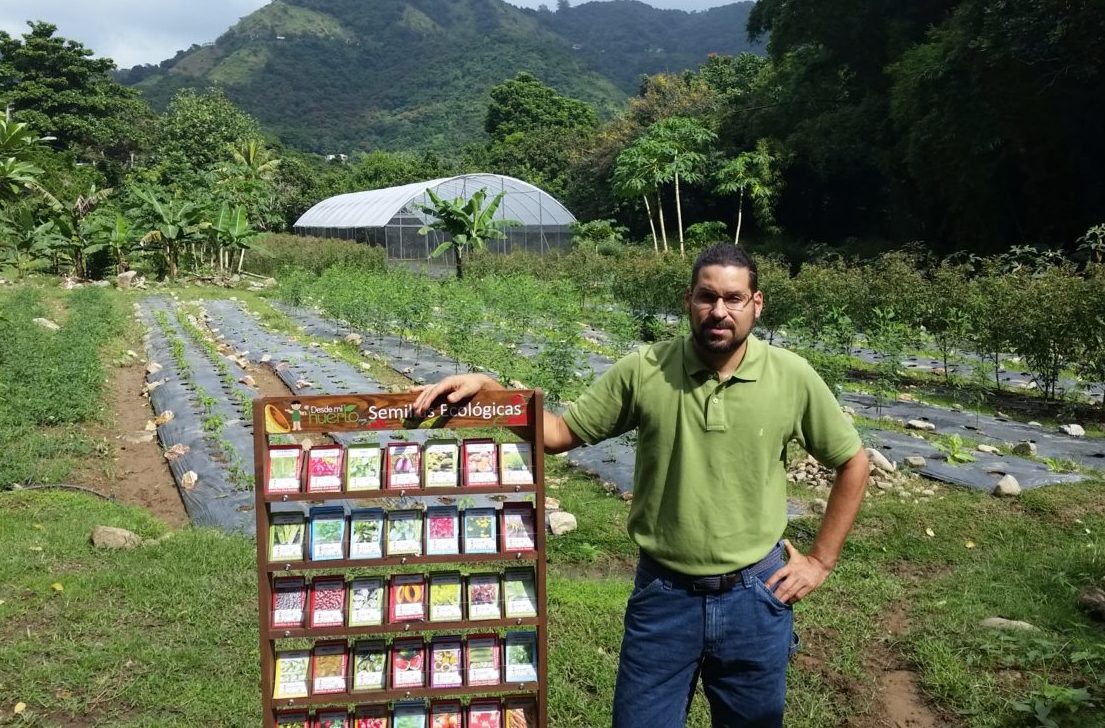 Puerto Rico native Raul Rosado, a chef by training, would escape to the forest when he needed a break from his cut-throat kitchen career in the crowded capital city of San Juan. By chance, he met a farmer while hiking in Utuado—the lush, west-central mountains of Puerto Rico—and Rosado came to enjoy this simpler life that the farmer led in tune with nature.

Rosado, then in his 20s, began helping on the farm and soon was helping city dwellers get started with their own gardens. This was just the beginning of his work in changing the way people on this 100-by 35-mile island source their food.

Rosado, now 35, says farmer is not an occupation presented as an option to young Puerto Ricans. “It is not something that the schools or the older people want you to be,” he says. “They tell you you’re not going to have a good income and that those people don’t live well.”

This negative connotation started to take root in the late 1940s, when the U.S. government’s Operation Bootstrap (“Operación Manos a la Obra”) provided incentives for corporations to bring manufacturing and industry jobs to Puerto Rico, taking people off the land and away from the once-thriving—now non-existent—sugar plantations. Somewhat out of necessity—and thanks to the nation’s current debt crisis and unemployment rate—Puerto Ricans’ negative image of farmer is wearing off, but slowly.

Puerto Rico is a U.S. territory, and its crippling $70 billion debt and teetering food system has left the U.S. government shrugging its shoulders. As neither a state nor an independent nation, Puerto Rico is subject to laws unlike those of actual states, including barriers to trade, and its citizens are not afforded the same rights (i.e., voting), as other U.S. citizens.

Spending three months in Puerto Rico in early 2016, I expected locally grown tropical fruits in mom-and-pop grocery stores, chefs serving Caribbean fare rooted in what they grow year-round, and home gardens on every block. Instead, major-chain grocery stores carried overpriced avocados from the Dominican Republic, while restaurants dished out Sysco-supplied ingredients—mostly battered and fried. While I got to know a few farmers and food advocates throughout the island, the general population showed a lack of agricultural knowledge and, frankly, interest.

In 1956, income from other industries outpaced agriculture for the first time in Puerto Rico. Since then, but particularly for the past 30 or 40 years, the importance of agriculture has been downplayed here, according to Luis Mejía-Maymí, Sustainable Agriculture Research and Education state coordinator for Puerto Rico and agricultural-economics specialist for the University of Puerto Rico Cooperative Extension.

Prime agricultural lands—largely located along the northern coastal plains—were developed for industry and tourists, and farming and gardening skills were lost between generations. As of 2013, there were, more than 5 million Puerto Rican citizens living on the U.S. mainland and only 3.5 million on the island, yet Puerto Rico still has 1,164 persons per square mile, according to Mejía-Maymí. And as a result of dwindling capital and a lack of infrastructure and distribution systems, it became easier for grocery stores and the food-service industry to ship food from the mainland than to grow it there.

Despite the larger downturn, local farming in Puerto Rico has begun to make great strides in recent years. Puerto Rico has reclaimed more than 30,000 acres of agricultural land—often taken back from jungle forests, which quickly encroach on untended land—and more than 1,700 new farms have begun operations since the current Puerto Rico Secretary of Agriculture Myrna Comas Pagán took office in 2013. (The island had only around 13,000 farms in 2012.)

Various factors have led to the rebound in agriculture, including the time it takes to transport food to the island. Like many modern island cultures, including Hawaii, Puerto Rico imports the great bulk (85 percent) of its food supply. “We buy a lot of things that come from very far, like Australia and the Philippines,” Mejía-Maymí says. “It can be weeks or months before it gets to the people here.”

Mejía-Maymí also points to Puerto Rico’s economic crisis as a driver of the growing interest in farming. “It’s not easy to find a job,” he points out. While many young people continue to move off of the island, others “are looking at agriculture as an alternative for their life.”

The government has begun supporting more farmers. Comas Pagán expects the food security plan the Puerto Rican government recently enacted to increase local food production by 25 percent in five years. She also expects the plan to lead to a 20 percent increase in gross agricultural income, which she hopes will mean an increase in overall economic strength.

“A stronger agriculture has a greater multiplier effect,” Comas Pagán told Civil Eats. “For every farm or agricultural-production job, we could generate two jobs in other, additional economic sectors.”

She points out that public-school cafeterias (“Comedores Escolares) now source 60 percent of their products locally and the Family Market (“El Mercado Familiar”) allows Nutrition Assistance Program recipients (the equivalent to SNAP benefits in the U.S.) to purchase directly from farmers. (More than one-third of Puerto Ricans receive nutrition assistance, compared to about 13.5 percent of citizens nationwide.)

The U.S. federal government is also getting involved in supporting agriculture in Puerto Rico. Farmers in Puerto Rico received $37 million in such support in 2012, including some of the same subsidies and incentives that farmers on the mainland receive—the Conservation Reserve Program, Emergency Conservation Program, and Noninsured Crop Disaster Assistance Program among them.

The National Institute of Food and Agriculture has provided $56 million in education and extension support and for research against major issues, like citrus greening. The Natural Resources Conservation Service operates a Caribbean Area office with eight field offices in Puerto Rico. These programs and incentives are now offering farmers in Puerto Rico many of the same resources and educational opportunities that those stateside are able to access.

Additionally, in 2015, the U.S. Department of Agriculture launched its StrikeForce for Rural Growth and Opportunity Initiative in the commonwealth.

And in June 2016, eastern Puerto Rico was named a federal Promise Zone, which aims to create jobs and improve access to healthcare. Among the Promise Zone’s agricultural initiatives are the development of a food hub and commercial-scale hydroponic farm with teaching kitchens and a food-business incubator. Located on northeast corner of the island, at a former naval station, Comas Pagán says, the initiative will provide for essential education and technological advancements.

Mejía-Maymí says he has seen more people—young people, especially—begin seeking information about agriculture from the university in the past four or five years. “I have seen changes in the way that society sees agriculture,” he says. “The people, in general, are giving more importance to the reality that we are very fragile in the way that we satisfy our need for food.” 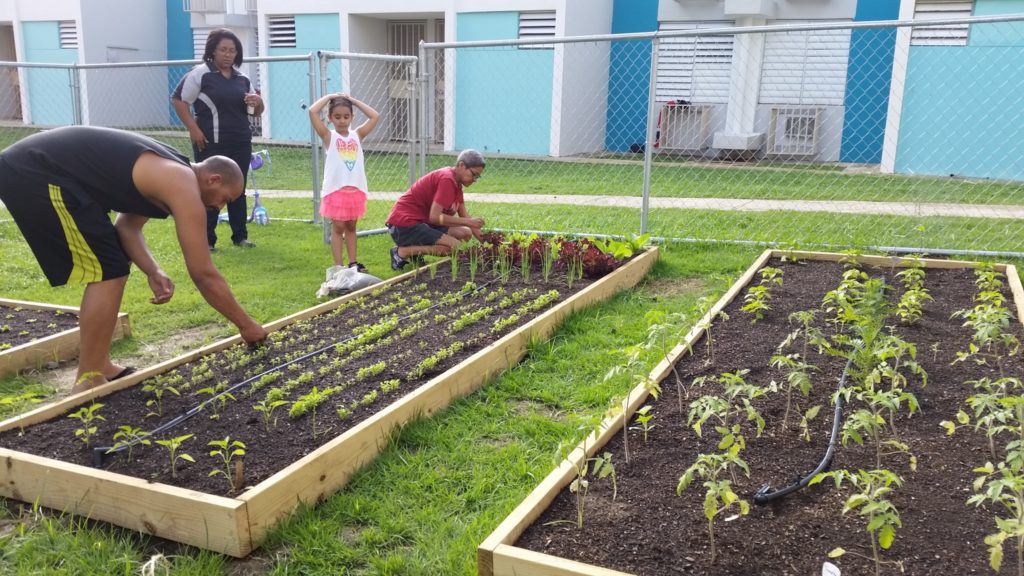 Sowing the Seeds of Sustainability

Rosado’s garden has come a long way. His chance encounter with the farmer in the tropical forest led Rosado to start his own 3-acre organic farm, Desde mi Huerto, and seed business, Caribbean Eco Seeds, among the mountains outside the southwest Puerto Rico town of Patillas, in 2004. The farm is fed by the Patillas River, which flows from the Toro Negro State Forest—the only tropical rainforest in the U.S. national forest system—and features more than 70 varieties of edibles and flowers, all organic. Desde mi Huerto also offers workshops and assists home gardeners in producing their own food.

Realizing the demand for Puerto-Rico-adapted plants, Rosado says, “It was natural to turn to seed saving [as well]. We saw the need to have more diversity of seeds and to have more varieties that are adapted to our weather.”

Caribbean Eco Seeds started selling certified organic seeds to local customers and at farmers’ markets in 2012, then broke into distribution through health food stores. Now, the seeds can be found in more than 80 stores in Puerto Rico. Rosado aims to produce seeds for all of the Caribbean, noting that Puerto Rico isn’t the only island that needs help in the food-security department.

In addition to an increase in home gardening, however, Rosado has seen an increase over the past two or three years in large-scale monocultures and conventional agriculture. Corn, especially, is more visible now. Dairy is, by far, the largest sector of Puerto Rican agriculture, valued at $189.4 million. Plantains—grown on more than one-third of Puerto Rican farms—are the next most important crop, bringing $80.5 million to the market. Poultry, cattle, coffee, and bananas follow in popularity. Watermelons are also making it on to the scene.

Seed and chemical companies also undertake major crop trials in this year-round-production environment. Corn, soybeans, cotton, sorghum, and sunflowers are among the research focuses. Part of this biotechnology interest could be due to government incentives for industrial farming and biotech companies: 100 percent exemption on farm-property taxes and taxes for agricultural equipment, 90 percent exemption on income taxes for certain agricultural work, and 50 percent tax credit for investment in ag businesses.

Among those with a presence are Monsanto, DuPont Pioneer, AgReliant Genetics, Mycogen Seeds/Dow AgroSciences, and 3rd Millennium Genetics, and even the Illinois Crop Improvement Association has a Puerto Rico Winter Farm Team.

These incentives concern Sadhu Govardhan, founder of the Oro Verde Foundation, a nonprofit promoting sustainable agriculture and sustainable living. Mejía-Maymí believes, however, that the government is striking a balance between sustainability-oriented agricultural development and industrial farming.

“It’s important that the cake be divided into many pieces,” Mejía-Maymí says.

Several hurdles stand in the way of a continued increase in food production and the new interest in farming, but a lack of affordable land is the most significant. Puerto Rico spans less than 3.5 million miles, and only about 500,000 acres are in agricultural use. Comas Pagán says 99 percent of the land managed by the government is already in use. The department of agriculture is developing the Agricultural Land Bank of Puerto Rico to catalog private lands suitable for farming.

Additionally, slightly less than half of the island’s land is mountainous and not suitable for agricultural production. Also, Rosado says, many landowners have gotten older and passed away, while many of their heirs have left the island, creating absentee landowners.

Some Puerto Ricans, like Oro Verde Foundation’s Govardhan, blame government programs and intervention for their food-system dependency and lack of agricultural opportunities. Citizens feel uneasy with both the Puerto Rican and U.S. governments, he says. And while the depressed state of the economy is driving people to agriculture, it is also making access to land and farm-business capital more difficult.

“The current bankruptcy will lead to privatizations of most of the island’s assets; the corporate takeover has already begun,” Govardhan says. “In general, it’s a race against time: Will the remainder of our farmable land be destroyed within the next few decades, or will the resurging ‘back to nature’ movement save enough land to feed at least some of the people here?”

Meanwhile, other small-scale agriculturalists and believers in a more sustainable food system, like Raul Rosado and Luis Mejía-Maymí, hold out hope. They continue to provide support to small growers—those they believe will turn Puerto Rico’s food system around.

Mejía-Maymí says he’s encouraged by the growing interest in agriculture but not ready to say it’s more than just a trend. “The next step is action,” he says.

But Rosado is encouraged by the growth in home-gardener education, which he feels is making food production more accessible to the masses. “We are basically building the future of farming here in Puerto Rico,” he says.