The Coming Tomatopocalypse: Could a Tiny Moth Make Ketchup Scarce?

As the tomato leafminer moves closer to the U.S., farmers and scientists worry about its potentially devastating impacts. 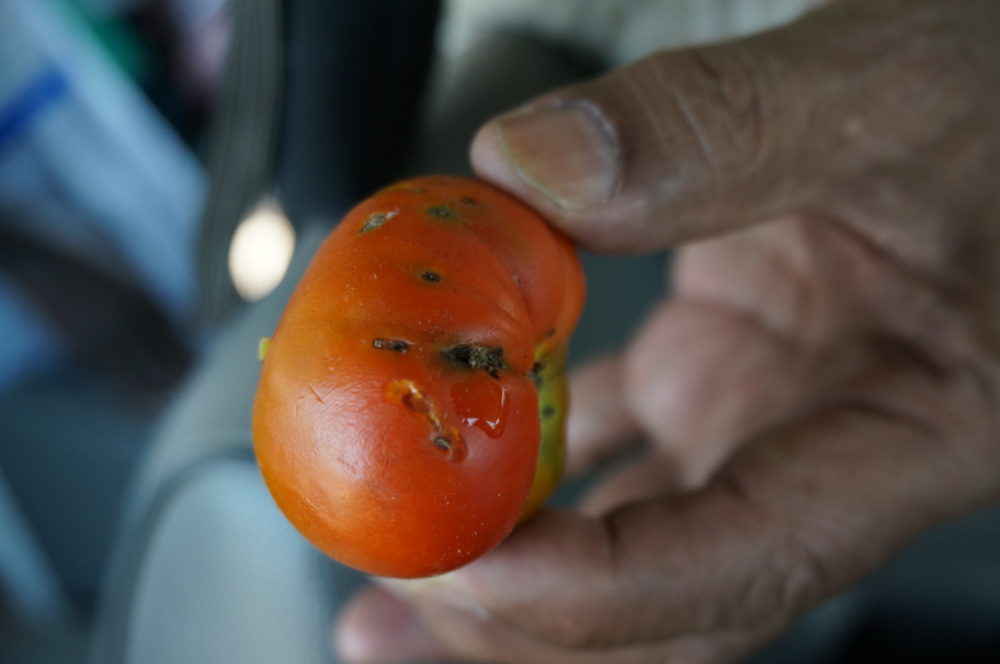 Local tomatoes are so abundant this time of year that they can be easy to take for granted. But there’s a new pest on the horizon that could make this popular sandwich ingredient much less common in the U.S. The South American tomato leafminer, also known as Tuta absoluta, is a small moth, but it could pose big problems for farmers and home gardeners growing tomatoes.

Native to South America, the tomato leafminer was accidentally introduced to Spain in 2006. By 2010, the moth had spread to the rest of the Europe and the Mediterranean. It reached the Middle East by 2011, and in 2012, it invaded Senegal in West Africa. It then spread through East Africa by 2014 and also reached India that same year. And in spring of 2016, it was confirmed in Nepal and Bangladesh.

The moth moves quickly and leaves destruction in its wake. When unimpeded, it can cause up to 80-100 percent crop loss in tomatoes. It affects other crops from the solanaceous family, also known as nightshades, such as potatoes, peppers, and eggplants. In Nigeria this past spring it destroyed over 80 percent of the country’s tomatoes, causing the price of a large basket of tomatoes to increase by over 400 percent, from around $10 to $40.

A Moth on the Move

In the western hemisphere, the pest has now made it up from South America to Costa Rica. And while it has not yet entered the U.S., most scientists agree it’s no longer a question of what will happen if it arrives, but when. And first, it will likely hit Mexico, a major tomato producer for the U.S.

“People want to know when Tuta will be in the United States,” says Muni Muniappan, an entomologist at Virginia Tech who directs the Feed the Future Integrated Pest Management Innovation Lab, where I work. “It could be in one year or 10 years, but eventually it will be here.”

The U. S. Department of Agriculture (USDA) is monitoring Tuta, assisting states in using pheromone traps for early detection and working with Costa Rica to suppress the pest and prevent its northward spread.

“Our domestic tomato industry could be severely affected,” says Devaiah Muruvanda, senior risk manager for the USDA. “The United States is taking it so seriously, we haven’t even given permits to do research, in order to prevent any possibility of the insect’s escape.”

In addition, the USDA has been regulating the import of tomatoes since 2009. In order to export tomatoes to the U.S., countries that have been invaded by the leafminer are required to remove the stock and the green material on the top of tomatoes before they pack and ship them.

Fresh and processed tomatoes generated $2 billion dollars in the U.S. in 2015, and U.S. tomato exports totaled $335 million, making the U.S. the seventh largest tomato producing country. An invasion by Tuta could put a serious dent in those numbers.

Scientists at the University of California, Davis, have issued a warning to master gardeners throughout the state letting them know that the tomato leafminer “will eventually establish in California, where it is likely to become a serious threat to tomato production.”

“There is no silver bullet for Tuta,” Muniappan says. “We cannot stop it, but we can slow it down.” To this end, the best protection is early awareness and action. Once Tuta is discovered, Muniappan recommends farmers employ integrated pest management methods, such as applying pheromones to lure moths into traps, using the leafminer’s natural enemies, and biopesticides, which are pesticides derived from natural materials such as plants, fungi, or bacteria, along with small doses of highly specialized chemical pesticides. However, for organic tomato farmers, a quick, intense dose of chemical pesticides is not an option.

When Ben Harder, the owner of Den Hill Permaculture in Christiansburg, Virginia, heard about the tomato leafminer’s current proximity to the U.S., he admitted he felt worried. “I hate leafminers,” he said. Den Hill isn’t a certified organic farm, but Harder prefers to avoid all chemical inputs when he can. When the pest draws closer, he says he will likely grow his tomatoes under some type of crop cover material, rather than using pesticides. “Protection is always easier than control after the fact,” he says.

When the pest does eventually enter the U.S., quarantine measures will be necessary to impede its rapid movement. To this end, Virginia Tech’s Biocomplexity Institute has developed a project to model the spread of Tuta using human movement as a variable in addition to climate models. Most models only use temperature and weather patterns as predictors of disease and pest spread, but this model will also take into account popular trade and travel routes.

“Our model will be an extremely useful tool to develop strategies to combat these pests,” says Abhijin Adiga, a research faculty member at the Biocomplexity Institute, who is the principal investigator on this project. “Further, the methodology will not be limited to studying the tomato leafminer, but can be applied to any agricultural invasive species.”

“With proactive actions,” Muniappan adds, “we hope to significantly reduce the economic loss caused by this pest.”