With the support of a multitude of organizations, New York City hopes to create a wholesale facility to benefit farmers and low-income consumers—and everyone in between. 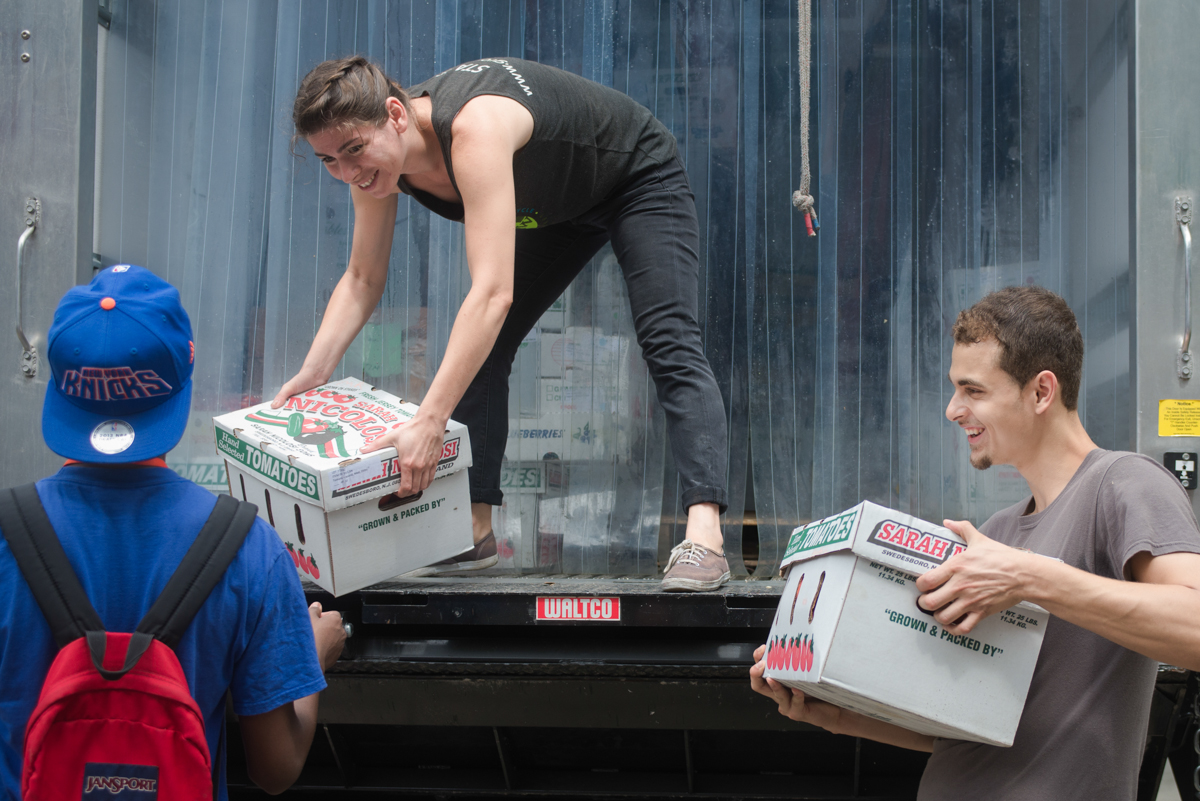 Picture thousands of pounds of local, seasonal produce traveling by truck to a centralized location in New York City every day. Once there, the fruits and vegetables from upstate farms will get refrigerated, packed, and processed before being distributed to stores and institutions all across the five boroughs.

This is the vision behind the highly anticipated food hub that New York State governor Andrew Cuomo announced he was allocating $15 million toward building last month. The state-of-the-art hub is planned for the Hunts Point section of the South Bronx, an area with a complex history of aggregating the city’s food.

The governor’s news was met with cautious optimism among a wide-ranging group of organizations that considers the hub the best means of ending a distribution bottleneck between rural upstate farmers and urban downstate consumers. It’s hoped that the vast 120,000 square foot indoor/outdoor market, which may break ground as soon as Fall 2017, will create some 245 jobs, increase New York farmers’ access to wholesale customers, and make fresh produce more affordable in vulnerable communities.

“Our coalition was broad-based across the political spectrum, from the Farm Bureau to the upstate Land Trust to local food banks—basically the gamut of those who touch food,” says Michael Hurwitz, director of GrowNYC’s Greenmarket, the sister organization to Greenmarket Co., which will run the hub. “The governor wanted to see that others had confidence in the project, and in us.”

In fact, the green-lighting of the hub was announced in conjunction with the release of a New York State-New York City food hubs task force report that voiced support for projects such as these. It’s also in line with research conducted by the U.S. Department of Agriculture (USDA) that shows that hubs provide strong benefits to low-income neighborhoods in need of fresh, affordable food, and small- and mid-sized farms looking to expand their income by reaching large-scale outlets such as supermarkets, school districts, and hospitals.

James Barham, a food systems specialist with the USDA, helped put together the department’s Regional Food Hub Resource Guide back in 2012. He thinks Greenmarket Co.’s model follows the recommended criteria for success: strong partnerships, stage development—Greenmarket Co. has been operating a smaller hub out of a 5,000-foot rented storage unit for the last two-and-a-half years—and a wide range of experience with the complexities of New York’s food landscape. 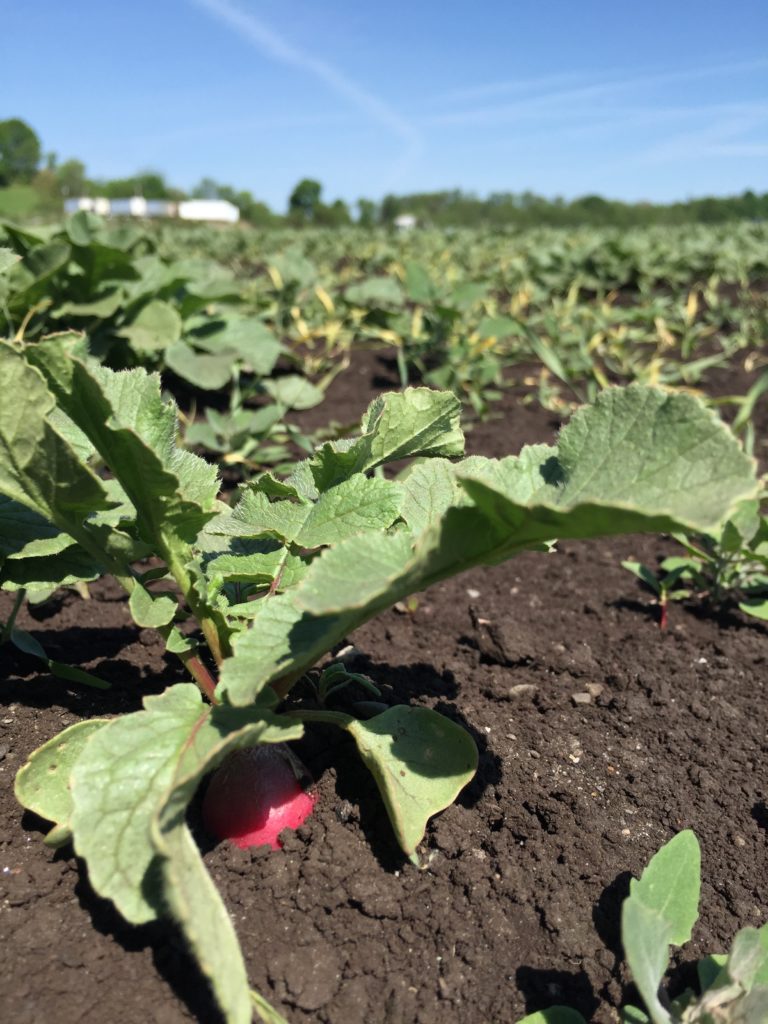 He points out that the organization still has some fundraising to do to reach their goal of $20 million for building costs. But, “in a lot of ways, this is the hub of hubs, because Greenmarket has its tentacles in every aspect of food in New York City,” he says, including youth markets, farmers’ markets, and community sponsored agriculture deliveries (CSAs). “I don’t have the same concerns with this hub that I’d have in other places that go really big.”

Hunts Point is already the site of an enormous wholesale food distribution center, which supplies 22 million New Yorkers with produce every day. But it has effectively shut out regional growers in what Barham calls a “turf battle” meant to stifle competition. Still, by building the new hub there, Greenmarket Co. can take advantage of a neighborhood that’s already zoned for warehouses and food distribution, thereby avoiding a lot of regulatory red tape, according to Hurwitz.

The Bronx location has other advantages, says Margaret Brown, an attorney with the National Resources Defense Council (NRDC), an environmental non-profit that supports the hub. Bodegas and supermarkets that serve “food desert” areas “already go to Hunts Point to buy, so it will be easier to get local produce into that channel,” she says.

Brown points out that the new hub also has the potential to bring jobs to residents of the low-income Hunts Point neighborhood. “Providing real, living wage jobs is a key piece to reducing food insecurity,” she says. As plans go ahead to get the hub up and running with a projected opening date of Fall 2019, she says NRDC will focus on making sure the community is involved in the hub’s development in a “meaningful way.”

Steve Rosenberg, executive director of the Scenic Hudson Land Trust, which urged Albany to move forward with the hub, will be looking to protect the interests of upstate farmers. In 2015, “Cuomo spent $20 million to conserve Hudson Valley farms—the first effort of its kind directed at a single region,” he says. “But as the food hub goes forward, and millions of dollars are spent, it’s going to be critically important to get all the details right to ensure economic viability for the farmers who will be supplying [the hub’s] food.”

He thinks part of that effort needs to include nuts-and-bolts solutions to fix inefficiencies in the distribution system—a farmer currently making the brunt of his money by supplying farmers’ markets has to maintain and drive his own truck for early morning runs, and contend with the challenges of weather and fuel prices, for example. Rosenberg also points to the importance of “connect[ing] the dots” in the public’s mind about where the local food they’re clamoring for actually comes from, and how it reaches them. 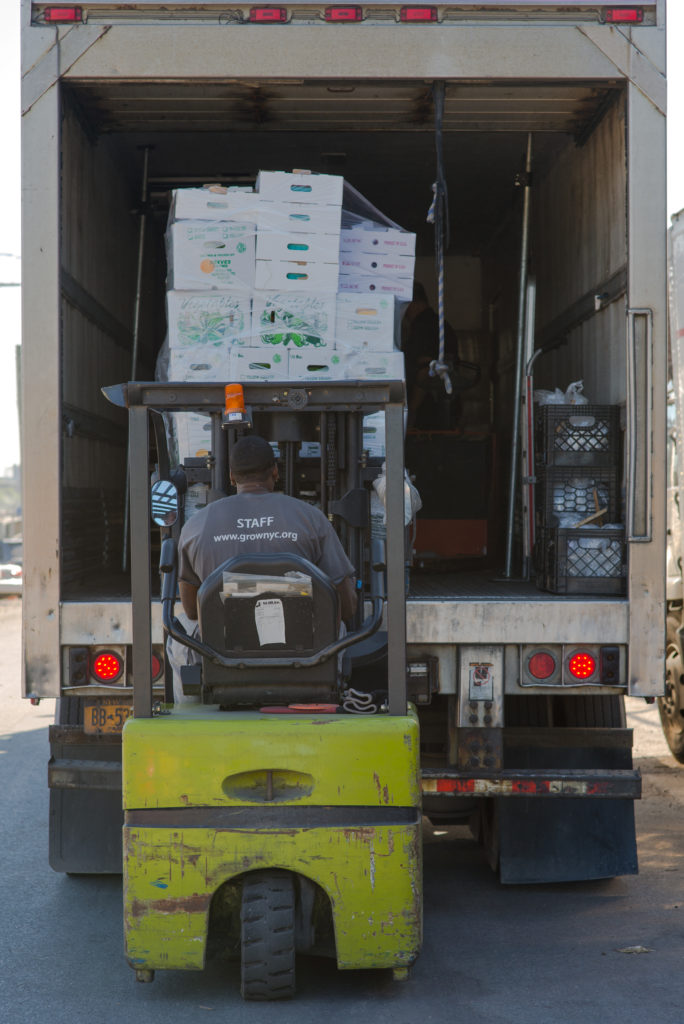 That sentiment is echoed by the New York Farm Bureau’s public affairs manager, Steve Ammerman. “There’s a lot of education that has to take place for consumers to understand what farmers are dealing with on a daily basis,” he says, including challenges to helping them transition from selling individual bunches of carrots at local markets, say, to whole pallets of them. “But this is one of those rare projects we all see eye-to-eye on, because it will benefit both sides. Food hubs are not a new concept, but this one has been coming for a long time—and we’re all hopeful that it will create a lot more opportunity.”

Until ground breaks on the new facility, Greenmarket Co.’s food distribution work will continue apace. “We still have day-to-day operations like deliveries that have to happen,” says Olivia Blanchflower, director of wholesale and distribution. “But we also want to continue to grow, so that when we move into our new facility the momentum will be there.”

The work at hand includes finding other distributors to which to rent hub space, providing support to farmers to get them get scaled into wholesale, and helping vendors feel comfortable purchasing from them. But, she doesn’t think any of those steps will pose a barrier. “There’s so much energy around the hub right now we’re excited to get started.”