In the latest development in an industry fraught with labor problems, an amputation at Tyson Foods leads to $263K in federal fines. 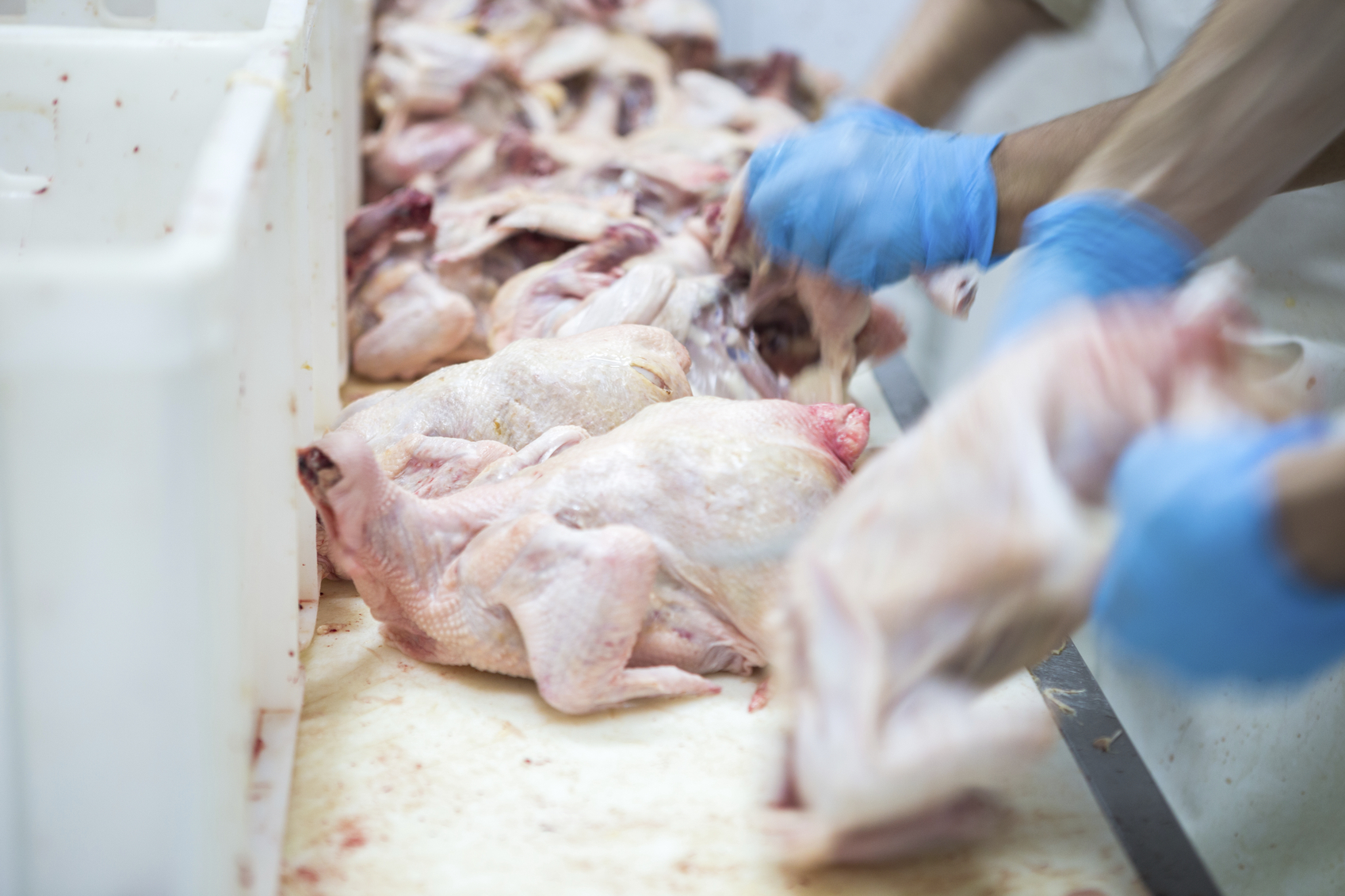 The average American ate more than 90 pounds of chicken last year—more than ever before. At the same time, the United States’ top two chicken producers—Tyson Foods and Pilgrim’s Pride—are reaping record sales and profits. Last year, Tyson reported more than $41 billion in sales and double-digit profits while Pilgrim’s Pride’s profits rose 17 percent in the same year. Yet missing from these enthusiastic sales reports is any mention of the enormous toll this industry takes on its workers.

In fact, poultry processors work in some of the most dangerous conditions in the food system. They suffer serious work-related injuries and illnesses at rates almost double those for other private industry workers, says Eric Harbin, Occupational Safety and Health Administration (OSHA) Dallas Region deputy regional administrator. And these injuries are often “gruesome,” says the Department of Labor.

In August, an OSHA investigation of such an incident—a finger amputation at the Tyson Foods chicken processing facility in Center, Texas—led to one of the biggest fines against the industry. While investigating the amputation, OSHA discovered 15 serious and two repeated violations at the plant. Among these were a lack of safety guards on moving machine parts, like the one where a worker lost his finger while trying to remove chicken parts that had jammed a conveyor belt. The company now faces $263,000 in proposed fines.

“These are some of the largest fines given in one inspection to a poultry company,” explained Deborah Berkowitz, National Employment Law Project senior fellow and former OSHA chief of staff.

OSHA inspectors also found Tyson Foods had failed to provide the Texas plant workers with protective equipment or training for using peracetic acid, a disinfectant that can cause burns and respiratory illness. In addition, OSHA cited the company for slippery floors, falling crates, and trip-and-fall hazards. Tyson Foods was also cited for fire hazards posed by improper chemical storage—also repeat violations—and unsafe levels of carbon dioxide at the plant.

“As one of the nation’s largest food suppliers, [Tyson] should set an example for workplace safety rather than drawing multiple citations from OSHA for ongoing safety failures,” said David Michaels, assistant secretary of labor for OSHA in a statement.

An Industry Plagued by Hazards

Tyson is far from alone in their approach to labor. A look at OSHA inspection records show that Pilgrim’s Pride, Perdue, Foster Farms, Sanderson Farms, and Wayne Farms all have records full of chronic safety hazards.

“It seems like there’s a culture in this industry of treating workers as replaceable,” she said. According to the Government Accountability Office, the industry’s workers typical earnings barely clear federal poverty levels for a family of four.

What also makes this work so dangerous are the incredible speeds at which workers must process poultry—more than 100 chickens per minute. (The Department of Agriculture proposed raising this speed to 175 birds per minute back in 2012 and this proposal may creep into an amendment to the 2017 federal budget bill.) Workers are also often crowded, leading to what Berkowitz calls “neighbor cuts.” In one such accident at a Foster Farms plant, a worker’s liver was punctured with a 5-inch blade when he and a coworker bumped into each other and one slipped.

“The pace of work is so fast. It is cold, it is slippery, there’s water and peracetic acid being sprayed on the meat,” said Berkowitz. “There’s a relentless drive to produce chicken at the cheapest possible cost. And they go at inhuman speeds,” she said.

Kendrick, a young African-American man who was interviewed by SPLC for their recent report on poultry processing, developed carpal tunnel syndrome as he worked the deboning line at a plant. The report reads:

When he asked the nurse for a lighter work assignment, she let him know there were consequences for such a request. “Do you want your job?” she asked him.  “It’s a house of pain in there,” Kendrick said.”

Recent changes in  U.S. Department of Agriculture (USDA) meat inspection rules also means companies now use more disinfectants than they did previously, Berkowitz explained. “Chicken gets repeatedly dipped in these vats of chemicals.”

A Tyson foods poultry plant worker named May with whom I spoke for a recent story for In These Times, explained that the company only allows her to use the bathroom twice per night. “That is not enough for people,” she said.

“The lack of bathroom breaks is representative of the larger lack of respect for the workforce,” Oxfam U.S. domestic program director, Minor Sinclair told Civil Eats.

These problems are far from new. Given this history, to help address these ongoing safety hazards, in October 2015, OSHA began what’s called a “regional emphasis program,” focusing on poultry processing plants in the Southeastern U.S., home to several of the country’s top chicken-producing states. The year-long program is designed to reduce employee injuries and illness and to ensure that the industry properly records all work-related injuries and illnesses.

OSHA’s recent announcement of Tyson Foods’ Texas plant violations is a result of this program. So is OSHA’s unprecedented citation of Pilgrim’s Pride—announced in July—for 22 safety and health violations, including failure to ensure workers use hearing protection, a lapse that caused 16 Pilgrim’s Pride workers to suffer hearing loss in 2015. But what made the citation record-setting was the fact that for the first time, OSHA cited the poultry industry for failing to make timely medical referrals for workers injured on the job.

Again, Pilgrim’s Pride is not alone in its failure to make such medical referrals. One notable case occurred at a Wayne Farms plant in Jack, Alabama, where OSHA found one worker who was seen by the company’s nursing station 94 times before being referred to an outside physician.

“These violations will trigger the new rules,” he explained. The rule is aimed at getting companies that supply food to federal institutions such as the U.S. Defense Department and USDA to clean up their acts—and make sure those who, as Secretary of Labor Thomas Perez said, “cut corners at the expense of their workers,” don’t “benefit from taxpayer-funded federal contracts.”

Tyson’s labor and safety record has already lost the company contracts with the Los Angeles Unified School District under the district’s Good Food Policy. “The procurement rules are going to have even a bigger bite than the enforcement rules,” said Sinclair. But he adds that even the biggest fines OSHA can levy may not be “significant given the companies’ earning.”

When asked about the OSHA citations, Tyson Foods said in a statement to Civil Eats, “We never want to see anyone hurt on the job, which is why we’re committed to continual improvement in our workplace safety efforts.” Tyson Foods’ statement also said it “fully cooperated” with OSHA’s inspection and intends “to meet with OSHA officials in an effort to resolve these claims.” Similarly, Pilgrim’s said via email, “We are working with OSHA to review the allegations in detail, with the goal of continuously improving our ability to provide a safe work environment for our team members.”

Until recently, poultry industry labor issues have not attracted much widespread consumer attention, said Sinclair. But that’s starting to change. Oxfam’s recent report received a significant amount of media attention with frank headlines such as “‘I had to wear Pampers’: The cruel reality the people who bring you cheap chicken allegedly endure.” Oxfam also delivered to Tyson headquarters a petition with 150,000 signatures demanding safe, fair working conditions.

“We need to make the case to consumers and retailers that this is something they need to think about,” said Berkowitz. Consumer pressure has changed animal welfare practices, she noted. “We need to elevate consumer awareness not only of inhumane treatment of animals but also of workers.”

The powerful poultry industry “is definitely pushing back,” said Tsu, alluding to a Georgia poultry company’s lawsuit seeking to limit an OSHA inspection. But she added, “Once consumers start engaging, changes may happen.”