Navina Khanna Unites Political Forces in the Name of Food

With the HEAL Food Alliance, this food justice activist is taking it national. 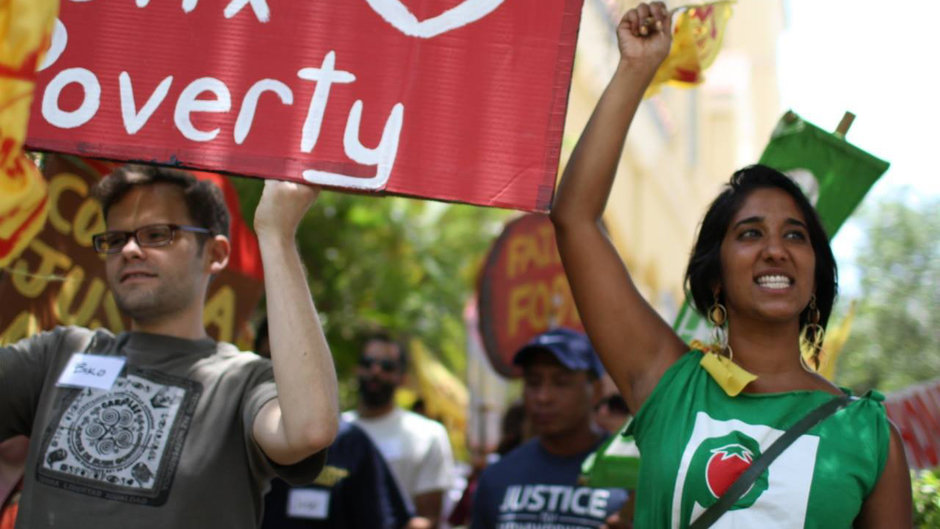 Navina Khanna thinks big. Two years ago, Khanna and Anim Steel, executive director of the national, campus-based group Real Food Challenge, sent a memo to around 20 food advocacy organizations to propose that they work together on something with a larger impact.

Khanna and Steel had previously studied successful social justice campaigns — such as Martin Luther King’s Birmingham strategy and the more recent “One Penny More Per Pound” campaign to help tomato harvesters in Florida earn a living wage. With these in mind, they wrote out this mission: create a “long-term campaign to re-align national food and agriculture policies with principles of health, sustainability, and fairness.”

“The response we got from pretty much everyone was, ‘this is a completely daunting and overwhelming idea. And this is exactly what we need for the movement,’” recalls Khanna. As a fellow for California’s Movement Strategy Center she already had experience building alliances between various branches of the food movement and the flood of responses was encouraging. “If it isn’t daunting, it isn’t worth doing,” she remembers thinking at the time.

A year later, the coalition premiered the Health, Environment, Agriculture, and Labor (HEAL) Alliance. Khanna, who now directs it, is building a political platform in collaboration with a small group of “anchor organizations” — the New York Food and Fitness Partnership, the Union of Concerned Scientists, the Real Food Challenge, and the Food Chain Workers Alliance — and close to 40 additional member-based organizations.

The problems these groups work to address may seem unrelated at first. For instance, some may be focused on the skyrocketing rates of diet-related illness among children and teenagers, or the fact that food insecurity (i.e., hunger) is at a historic high among Americans, while others are looking to reduce the sizable impact that agriculture has on climate change, or the well-known plight of the family farmer in this country. But, as Khanna sees it, they are all part of the same challenge

“We’re seeing consequences of our broken food system in so many of our communities,” she says. “So it’s absolutely imperative that we see the interconnections.”

Khanna, who grew up in the U.S. and India, had plans to return to India after college to work with farmers who were trying to restore traditional growing techniques. But as she studied sustainable agriculture, eventually earning her Master’s degree in international agricultural development from the University of California at Davis, her perspective broadened.

“I realized how much U.S. policy actually decides how farmers in places like India and around the world live and die,” she recalls. For these reasons, bridging the sustainable farming world and the food justice worlds has always been a priority for Khanna.

At the farm-focused U.C. Davis, she says, “I would be the lone voice bringing up social justice.” Then when Khanna moved to Oakland and worked as a food justice and food security organizer, she says, “I wasn’t hearing people talk about the ecological aspects of food culture.” But, she says that gap is beginning to close.

With the HEAL Alliance, the goal is to cast the whole food system—with all of its often opposing challenges—as a single challenge worth tackling as a unified group.

HEAL is also working with Washington, D.C.-based group Food Policy Action, which rates members of Congress based on their food votes, to get the food system on the presidential candidates’ radar with the Plate of the Union campaign. The group was at both political conventions this summer, where it kicked off a food truck tour, and they also have a campus challenge, a petition and social media campaign underway.

It has also hired campaigners in five states—Iowa, New Hampshire, Ohio, Pennsylvania, and North Carolina—who are working closely with groups already making local change on the ground in areas such as agriculture, food access, and food workers’ rights. The organizers are attending town hall meetings and community forums for both candidates to highlight the fact that food is deeply tied to other big election year issues, such as national security, health care, and income inequality.

“What we want to hear from the candidates is that they understand that there is a whole food system and that it is something they need to be taking on,” says Khanna. “In the last few years, we’ve heard some candidates talking about single issue campaigns—like GMO labeling—but we want to avoid the single-issue pieces and get at the whole system.”

The group’s work was echoed by the much-read calls for “a national food policy” made by Michael Pollan and Mark Bittman, who were joined by Union of Concerned Scientists’ Ricardo Salvador and former United Nations Special Rapporteur on the right to food, Olivier De Schutter. The authors argued that “the production and consumption of food has a bigger impact on Americans’ well-being than any other human activity” and therefor deserves a forward-thinking set of policies. In other words, what Khanna and the HEAL Alliance are cooking up.

“A lot of people have been talking about the need for something larger,” says Khanna. “So the time is right.”

This article originally appeared on the Food &Wine website in partnership with Civil Eats.