Are You Eating Food That Was Irrigated with Oilfield Wastewater? | Civil Eats

Are You Eating Food That Was Irrigated with Oilfield Wastewater? 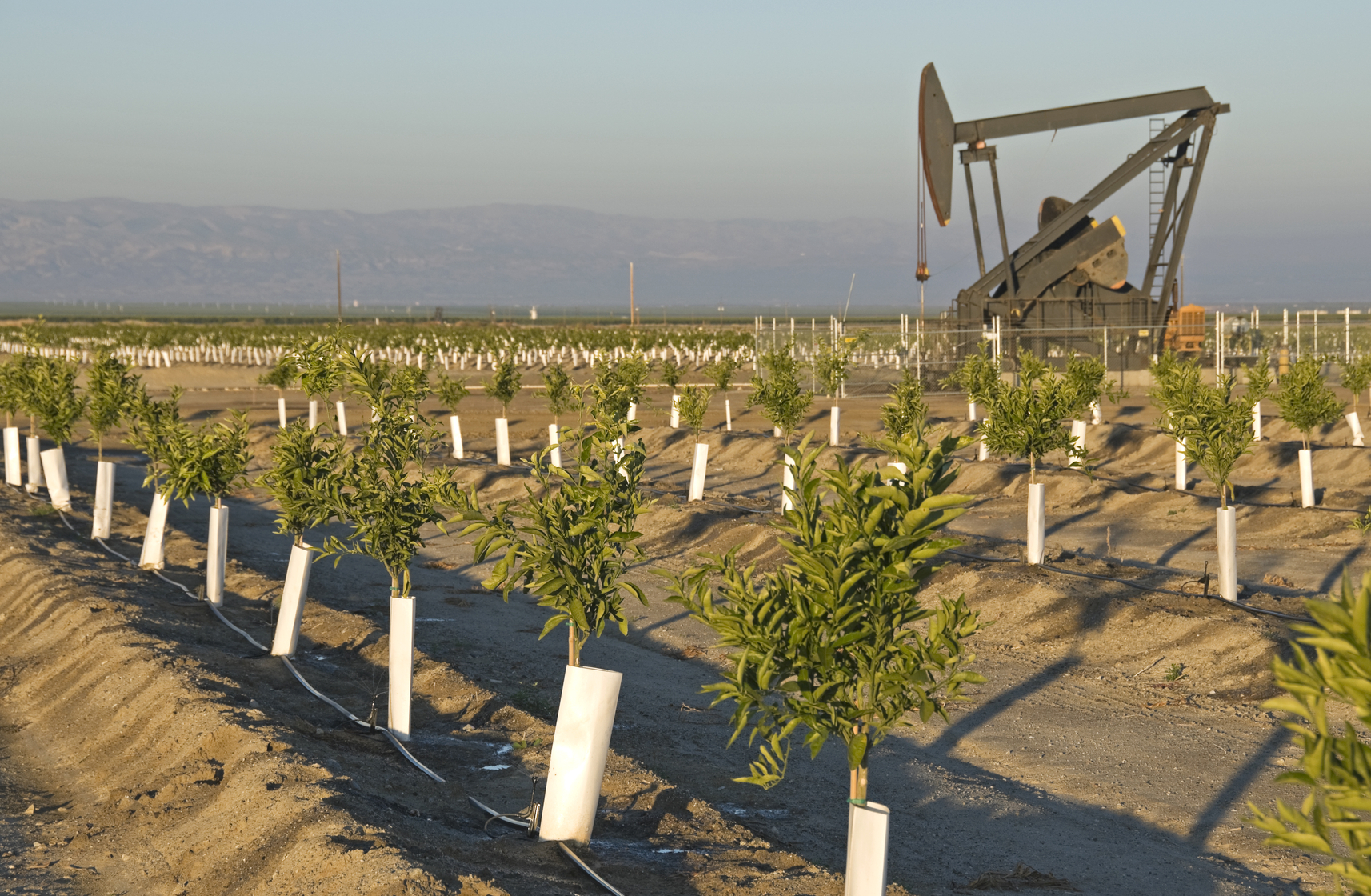 For those who haven’t spent time in California’s Central Valley, it may come as a surprise to learn that the same landscape that produces nearly half of the United States’ fruit, vegetables, and nuts is also home to active oil fields. Drive through these farm fields, particularly in Kern Country, two hours north of Los Angeles, and you’ll see bobbing oil derricks scattered throughout the acres of nut orchards, vineyards, and farms growing crops that include carrots, potatoes, and tomatoes.

Oil drilling began here in the 1870s. And because of the geology, when this oil is extracted, it brings large volumes of water out with it. The question of what to do with this water—often called “produced” water—which contains salts, oil, and other contaminants, is a question at the center of a controversy in the drought-plagued state. More specifically, should it be irrigating crops?

Recycling wastewater for agricultural irrigation here is not new. The practice has been going on for at least 20 years; in some places it dates back to the 1980s. But it has come under increasing scrutiny as the impacts of fracking elsewhere in the country have heightened public concern about the way oil and gas drilling can impact water quality. While there’s no fracking in the Central Valley districts using this water, there are concerns about chemical contaminants—both those that occur naturally and those that might result from the oil extraction process, which uses numerous chemicals to maintain the wells.

At the same time, California’s epic drought has increased farmers’ interest in using this water. Last week, a coalition of environmental and health advocacy groups delivered a petition with some 350,000 signatures to California Jerry Brown and the California Water Resources board asking the state to stop this practice until it can be proven safe. On the same day, California’s major agricultural trade organizations signed a letter opposing a state Senate bill that would increase regulation of this water. And it seems that many major Central Valley agricultural producers wish questions about this issue would just go away.

“We understand that there are a lot of folks concerned,” California Water Resources Board deputy director John Bishop told Civil Eats. “That’s why we have requirements on any water that’s being used,” said Bishop, explaining that this water must be tested to meet certain standards and that the Central Valley Water Quality Control Board has convened a Food Safety panel to look into these issues. “We take it seriously, ” he said “We’re concerned about any discharge that would impact any beneficial use of water.”

“I think it’s not as big issue as some people think it is,” said California Farm Water Coalition executive director, Mike Wade. “[Irrigation water has] been monitored for a long time by the agencies responsible for water quality, and the [water] districts are going beyond those requirements.”

“Our message is it’s the government’s job to do this testing and it should stop this practice until they can show it’s safe,” said Adam Scow, California director for Food & Water Watch.

Kern County almond farmer Tom Frantz agreed. “I have personally seen oil field wastewater” he told Civil Eats. “You can smell the oil in the water.” This practice is “threatening my groundwater,” he added. “The produce itself is just now being tested. That’s a big unknown.”

Is it “Irresponsible Not to” Use It?

Some of this water has been put into open wastewater disposal ponds ­or “pits.” Some of these have been found to contain carcinogenic chemicals. Two of the companies responsible have just been legally ordered to stop these discharges. Some water is also discharged into underground aquifers. Some gets treated and goes into the water that Cawelo and North Kern County Water Storage Districts’ farms use to irrigate crops. In the Cawelo Water District, some of this water is also used to replenish groundwater supplies.

According to the California Central Valley Water Quality Control Board, some 90,000 acres of crops are irrigated with this water. As the Board explained in a January 2016 presentation, about 16.3 billion gallons of the approximately 60 billion gallons of water produced by the oil industry annually, are currently used in irrigation.

In their August 9 letter to the state Assembly, the California Farm Bureau Federation, Agricultural Council of California, Western Growers Association, California Fresh Fruit Association, and trade organizations representing citrus growers and food processors, among others, said that given the drought’s reduction of other water supplies (especially in Southern California, which didn’t receive the rain the Northern parts of the state did last winter), this water is “a much-needed additional source of irrigation water.”

“In a massive drought scenario it wouldn’t be responsible not to use water that could be [used],” said Chance Kirk, director of food service and retail for VBZ & Sons, which has been growing grapes and cherries in the Central Valley for nearly 100 years.

What’s in the Water?

Oil companies have wastewater permits that require their discharge to be monitored. The water districts also have testing requirements. The water also has to meet state and federal standards. But there is considerable debate between environmental advocates, the agriculture industry, and California water districts as to whether the water is being adequately tested.

Speaking on behalf of the Cawelo Water District, Tiffany Moffatt of Fiona Hutton & Associates—a Los Angeles public relations firm whose services include “crisis communications”—explained that the district is now testing for more than 160 contaminants, a list recently expanded from its previous 70.

But Seth Shonkoff, executive director of PSE Healthy Energy, an energy and science policy nonprofit that has been researching chemicals in the water, questions whether the testing that’s been done is adequate.

The question, he says, is “What chemicals are being looked for? It’s pretty clear to anyone who works on oil and gas issues, that there are loads of different chemicals used in oil production,” including chemical products used to drill and maintain wells. Many of these, Shonkoff explained, “are completely left out of the monitoring program.”

In mid-June, responding to a legal order from the Central Valley Waster Quality Control Board, the seven oil companies operating in the relevant districts provided lists of  products used in their oil wells. These are now posted to the Board’s website. But the listings don’t reveal the products’ chemical ingredients—the key information needed to understand potential hazards.

While the toxicology firm hired by the Cawelo Water District has found the produced water “safe for agricultural use,” the first testing for the expanded list of 160 contaminants is not yet complete. And that list was compiled before the oil companies posted the list of drilling products used, so it’s not yet clear if existing tests have adequately investigated all chemicals that may be of concern.

Shonkoff said his organization would like to see truly independent testing done.

Is the Produce Safe?

The same toxicology firm, Enviro-Tox Services, also did what’s described as “preliminary crop testing” to see how Cawelo Water District crops grown with the oil wastewater compared with crops grown without this water. According to the district, this testing found no significant differences.

California Farm Water Coalition’s Wade said that the University of California’s cooperative extension has also looked at this issue and “couldn’t think of how the components people are alarmed about could end up in plants.” The U.C. scientists concluded that crops harvested with recycled water are essentially the same as those harvested with other water. Moffatt said the Cawelo Water District is now doing additional crop testing.

“The districts are being careful,” said Wade, adding, “The water districts don’t want to be doing something that’s not good for food safety.”

But Shonkoff isn’t so sure. Based on existing tests, “there’s no way to ensure that there are not hazardous chemicals present at concentrations that could cause harm,” he said. Allayaud, Scow, and Center for Biological Diversity staff scientist John Fleming all said the same.

Civil Eats contacted five large-scale growers in the districts that use oil industry water. Three did not respond to repeated requests for comment. Two said they did not use this water in their operations.

For the time being, Shonkoff is playing it safe. “I have a two-year-old, and I’m not feeding her carrots that I’m not certain about.”