This traditional North American meat is not always what you think. 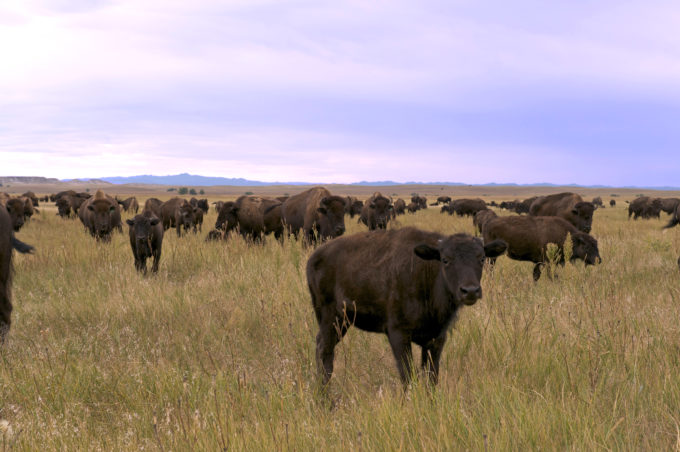 Not long ago, it was bison that dominated North America, reaching into the tens of millions, whereas beef cattle were relative newcomers, introduced by European settlers and miniscule in number.

Today, those numbers have been flipped: there are 90 million cattle in the U.S. and roughly 185,000 bison (another 150,000 are being grazed in Canada). Having barely survived the U.S. government slaughter of the 1800s, modern bison is therefore a niche delicacy.

Even so, bison meat is beginning to show up in more places—in freezers at Costco, on menus at bowling alleys, and in the pockets of amateur athletes in the form of energy bars. Growing consumer preference for lean, grass-fed meats that are humanely raised and offer a taste of place is driving today’s steadily increasing demand. (The recent designation by Congress of bison as the national mammal may spark further interest.)

But consumer perception about how bison are raised doesn’t always line up with the reality. A common assumption is that all bison are raised on grass and live their entire lives under “purple mountain majesties, above the fruited plain.”

In fact, about three-quarters of America’s bison are finished on grain, many in feedlots, according to Dave Carter, executive director of the National Bison Association. These animals are raised on grass for the first 18 to 20 months of their lives, but many are then transferred to outdoor corrals similar to cattle feedlots, where they’re fed grain (with added roughage) for the remaining 3 to 6 months of their lives.

Bison production methods aren’t tracked, but Carter estimates that the other quarter of America’s bison are grass-finished. They’re either sold as cuts or whole animals that are marketed as 100 percent grass-fed, or they’re older animals used for burger meat that is not necessarily marketed as grass-fed.

Bison producers often put their animals on grain to provide more of the fatty taste that Americans have come to prefer after years of eating grain-fed beef. And feeding a grain ration to bison gives producers some control over the consistency of their product, as bison meat can be quite variable due to the wild genetics of the species.

Not all producers who feed grain to their bison do so in feedlots, though. Instead, they grain their animals in the field, which allows them to label their bison “pasture-raised.” As is the case with beef, consumers may not know that a “pasture-raised” label doesn’t necessarily mean the animal was 100 percent grass-fed.

A number of bison producers in the U.S. are certified 100 percent grass-fed by the American Grassfed Association. Global Animal Partnership, which certifies meat sold at Whole Foods based on a 5-step animal welfare rating system, also recently released a set of pilot bison standards.

Despite the prevalence of grain-fed bison in the nation’s grocery stores, it is grass-finished bison—100 percent grass-fed—that is now the fastest growing segment of the industry, according to Carter. Grass-only producers are raising bison for direct sales to consumers, for use in energy bars, and for restaurants.

Given that only about 15,000 of America’s 185,000 bison are raised on federally owned public ranges (with another 10,000 on Native American tribal lands), it is private ranchers and bison meat purveyors who are doing the most to reacquaint this noble animal with the American grasslands it once dominated.

“I didn’t start out with some romantic infatuation with the bison,” says Sean Lenihan, a marketing executive who launched The Honest Bison four years ago. He was more excited about the Paleo diet—of which he had recently become a devotee—than the role of bison in American legend. Because Paleo eating requires the consumption of large quantities of lean meat, Lenihan was drawn to bison, which is known for being lower in fat and cholesterol than beef, as well as nutrient dense and high in iron.

Lenihan also wanted to support the kind of management practices taught by the Savory Institute, which calls for the restoration of the world’s grasslands through ruminant grazing and encourages farmers and ranchers to raise animals in ways that mimic the grazing practices of wild animals.

So from his home base of Los Angeles, Lenihan (who is not a rancher himself) partnered with various ranches in Wisconsin and the West to sell 100 percent grass-fed bison online, under The Honest Bison name. The company buys year-old calves from cow-calf operations out West and transports them to Wisconsin to be finished on grass according to its specifications.

Americans may not think of Wisconsin when they think of bison, but the steady rainfall and lush grass of the Great Lakes region, as well as relatively affordable land, has given rise to a number of bison ranches in the state.

Given that it takes two-and-a-half to three years for a grass-fed bison to reach market weight (compared with two years for a grain-finished one), grass-fed bison is perhaps the ultimate slow food. Producers therefore have to be patient for profit. “There is profit [in grass-fed bison], but the puzzle is making a living at it,” says Lenihan (who still has his marketing day job).

Most of The Honest Bison’s market animals are sold wholesale to the company making EPIC bars (more on them below). Online, however, Honest Bison customers can buy a range of individual cuts, and Lenihan is trying to entice his customers to think beyond the popular bison steaks. Toward that end, last year he launched a Kiva loan, which will, in part, pay for a marketing initiative to promote more unusual parts of the bison, such as tongue, heart, liver, and tail.

Lenihan is also trying to excite his customers about “field harvesting,” a process of slaughtering in which animals are harvested in the pastures where they’ve been raised. Although commercially available cows, sheep, and goats are required by the USDA to be slaughtered in a covered, inspected facility, bison are classified as “wild game.” Field harvest is a more expensive way to slaughter because of the extra time involved (only one or two bison are killed at time), but Lenihan appreciates that the animals have a quick death in the very fields where they grazed.

In South Dakota, the Wild Idea Buffalo Company, which has prairie restoration at the core of its mission, also practices field harvesting. Dan and Jill O’Brien own 27,000 acres, where they run 350 head of 100 percent grass-fed bison; they also source additional grass-fed animals from nearby ranches and lease part of the Buffalo Gap National Grasslands, bringing to 300,000 the number of acres of native prairie they influence.

Unlike The Honest Bison, which harvests its bison in pastures adjacent to its processing facility, Wild Idea brings a mobile processing unit onto its far-flung pastures come slaughter time. Jill O’Brien says field harvesting is “critical” to Wild Idea’s online customers, who appreciate that the animals are not restrained or forced into unfamiliar buildings. Plus, she notes, the meat doesn’t end up laced with cortisol, a hormone that can sometimes be released during stressful slaughter and can change the taste.

“The bison literally die with grass in their mouths,” O’Brien says.

From Pasture to Protein Bar

Bison’s fortunes closely track with our whims. The great herds of North America were nearly wiped out in the 1800s, when the priority was selling bison skins and depriving Native Americans of a food source. After ranchers rescued the few hundred remaining bison at the turn of the century, people tried crossing bison with cattle; in fact, many bison today—descendants of those rescued animals—still carry traces of cattle genetics. (“Beefalo” still exists as a product, but the National Bison Association prohibits its 1,100 members from crossing their bison with other species.)

Today, with high-protein, low-carb diets becoming more popular, bison is showing up in the form of protein-rich energy bars. EPIC, a company that sells healthy animal-based protein snacks, is the largest American purchaser of purely grass-finished bison, buying from Wisconsin, Colorado, Montana, and the Dakotas, as well as from Canada. One of its most popular products is a 100 percent grass-fed bison bar with added bacon and cranberries.

But EPIC—launched by husband-and-wife team Taylor Collins and Katie Forrest, and recently bought by General Mills—is currently unable to find enough grass-finished bison to meet the demand for its 100 percent grass-fed bars. It has to purchase grain-fed, pastured bison to make up the difference, meaning that some of its bars are labeled natural/pasture-raised, and not grass-fed.

EPIC is taking a proactive stance on the shortage, though. Collins says the company is working with both large and small ranchers to incentivize them toward grass-finishing. The company also introduces ranchers to holistic land management practices, such as those promoted by the Savory Institute and Polyface Farms’ Joel Salatin.

“A lot of these ranchers are excited about having a partner that will help them go grass-fed and pay a premium price for it,” Collins says.

Given that EPIC, through its buying power, has already expanded grass-only herds in this country, you could say the company is to grass-fed bison what Ted Turner is to grain-fed bison; the media mogul owns the biggest herd in America—around 55,000 grain-finished animals in Montana—and has introduced American eaters to bison through his Ted’s Montana Grill chain of restaurants.

EPIC, like The Honest Bison, is trying to get consumers interested in “alternative” bison products. Later this summer, it will start selling grass-fed bison tallow, and over the holidays it will offer grass-fed bison bone broth for the holidays. Wild Idea has also branched into value-added products: It sells buffalo bacon, pastrami, salami, and hot dogs, and is the supplier for a new line of bison jerky sold by Patagonia.

We’re a long way from the days when Native American tribes made what is known today as pemmican, a precursor to today’s protein bars. Pemmican is dried game meat, cut into pieces and then pounded into a near-powdery state and mixed with fat.

On the Pine Ridge Reservation in South Dakota, today’s Oglala Lakota make Tanka bars, a version of pemmican. Tanka bars are similar to EPIC bars and other bison snacks, but Native American Natural Foods, the company behind Tanka, says on its website that it’s unable to source enough grass-finished bison to make 100 percent grass-fed bars. It is 75 percent of the way there, and is eager to support new grass-based, Native American-owned ranches.

From Near Extinction to the National Mammal

Although the word “buffalo” technically refers to the Asian water buffalo and African cape buffalo—both unrelated to the American plains bison—“bison” and “buffalo” are often used interchangeably in the U.S.

A few years ago, the American plains bison, was added to the Slow Food Ark of Taste, a catalogue of endangered foods. More recently, bison got a boost when bison tenderloin was served at President Obama’s second inauguration.

And in May of this year, Congress voted overwhelmingly to make the bison the nation’s first National Mammal. A coalition called Vote Bison worked for years on the designation, which is largely symbolic but validates the animal as a key part of the national consciousness.

All of this attention cheers bison producers, who form a tight community serving what Dave Carter of the National Bison Association says is still a young and emerging market.

“My mantra has been, I really don’t care how you produce your animals,” Carter says. “I just want you to be honest with your customers about how it’s produced. Then they’ll tell us which direction they want us to go.”