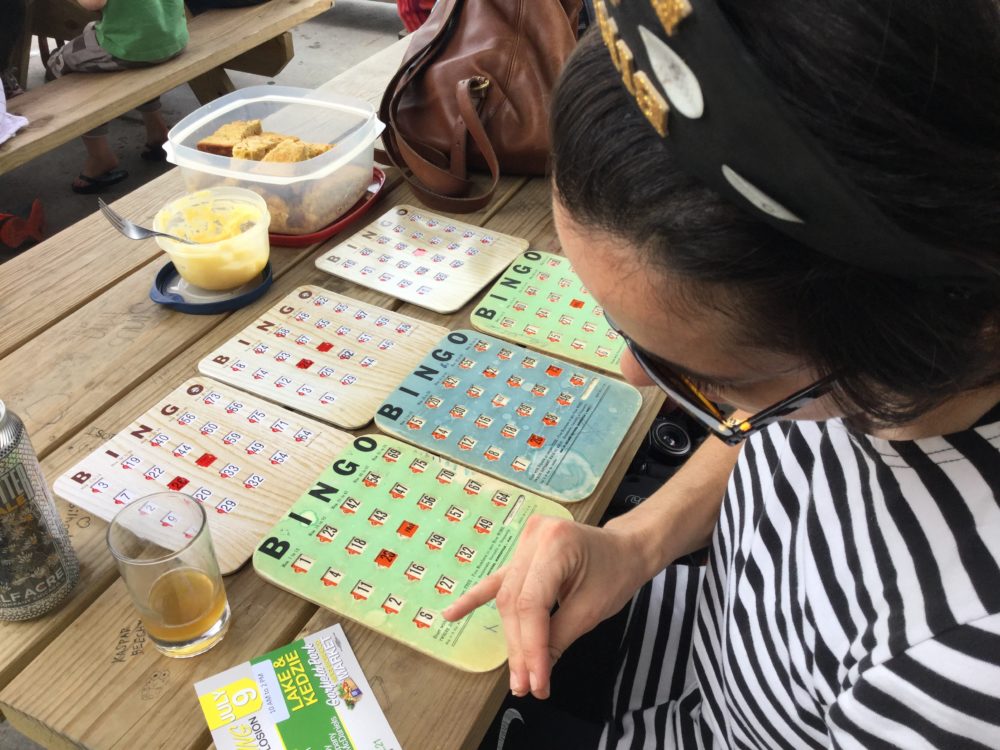 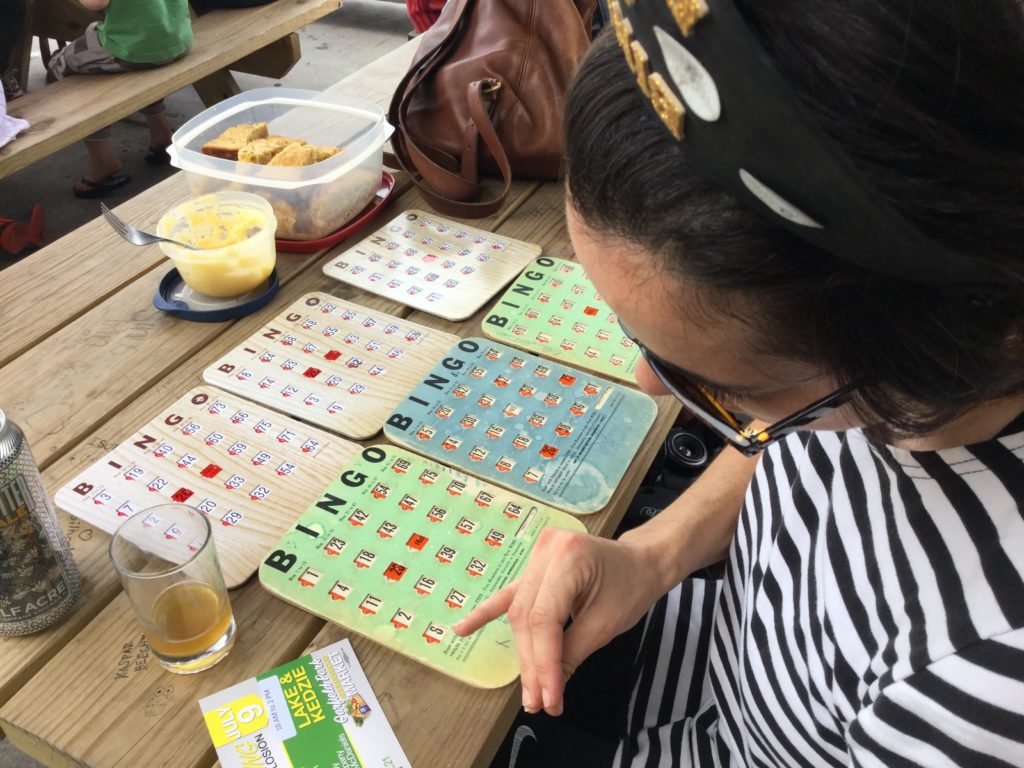 Someone shouts “bingo!” and the crowd at Chicago’s the Hideout hoots and hollers. It’s Wednesday night, and this small but legendary bar and music venue has been transformed into a hub for community gardeners and the produce they grow.

For 12 weeks each summer, the Hideout is home to Veggie Bingo and its cult following of community garden supporters. The fees, $4 a card or three for $10, benefit a different community garden each week and have helped gardens purchase tools and supplies including soil, seeds, sheds, compost, benches, and scholarships for young workers. On this July evening, the numbers are being sung for supporters of the Fulton Street Flower and Vegetable Garden located in Chicago’s Humboldt Park neighborhood.

Some of the players are regulars while others have come to the Hideout to try Veggie Bingo for the first time. Regular Jenny Hines, who lives in the city’s Logan Square neighborhood, admits to loving the offbeat event, calling it “the best day of the week!”

“I love the spirit in here and the idea that it’s a gathering to support food and community gardens,” Hines says. 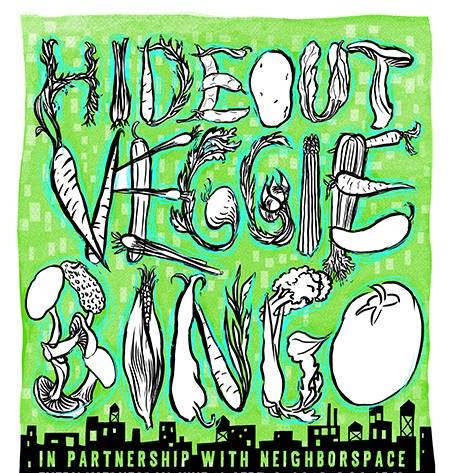 This unusual way of supporting an estimated 110 of Chicago’s nearly 800 community gardens grew out of a winter ritual held at the Hideout known as Soup & Bread. During the economic downturn in 2009, Tim and Katie Tuten, two of the bar’s four owners, said it might be time once again for soup lines. In response, Hideout bartender Martha Bayne, who also worked as a food writer, invited 12 local chefs to prepare their favorite soups weekly. Gaines bought an army of crockpots and added bread bakers as well. Every winter since then, patrons have come to eat soup and bread once a week, all winter long—and all of their cash donations have supported local food pantries.

The Hideout launched Veggie Bingo as a way to keep the goodwill—and support of community meal efforts—flowing into the summer. NeighborSpace, the nonprofit urban land trust that supports community gardens, sponsors the bingo night, and pools and divides proceeds among the dozen gardens chosen for the season. Robin Cline, assistant director of NeighborSpace estimates one night of bingo can bring in anywhere from $300 to $1,000. Since its founding, Veggie Bingo’s popularity has grown steadily; on some nights, it attracts as many as 125 to 130 players.

For prizes, community gardens donate items ranging from locally grown fruits and produce to preserves made from harvests, and organizers hand out seeds and herb starts as well. Small, sustainable food businesses, such as local coffee roasters, bakeries, and craft breweries, contribute prizes too. The night I was there, a couple who were moving even added some of their furniture to the mix.

Veggie Bingo is not the game of church basements. On this night, performer Lily Emerson and her husband Charlie Malave deliver the numbers on the Hideout’s stage by singing little ditties, say, about B-49. Local celebrities clamor to partake. Jon Langford, lead singer of the punk band the Mekons, once led the calls with his rendition of Marxist Bingo. 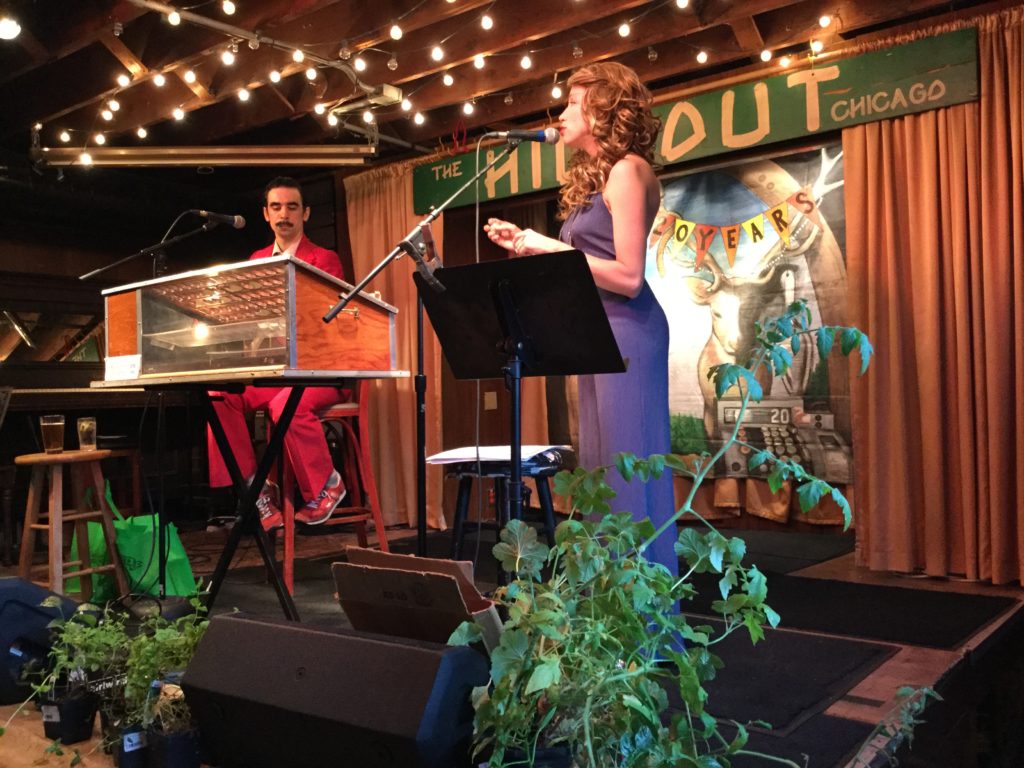 Somewhat of a small food fest in its own right, people coming to play bring friends and hold small potlucks at their tables. Along with local beers, they bring chips and hummus, small salads, and large bags of cherries. Because indoor space is limited, players spill outside onto the tables of a small patio as well.

In addition to being a fun and festive time, Veggie Bingo enables gardens to fund improvements that further support their communities. Angela and Sam Taylor, who oversee and maintain the 50- by 150-foot Fulton Street garden plot, said they used the $500 they received last year from Veggie Bingo through NeighborSpace to purchase solar panels for the greenhouse.

“Community gardens do more than just grow food,” Angela says as she lines up her bingo cards. “Community gardens grow babies and adults. They have created marriages and friendships.” Each season, she says, the Fulton garden yields greens, lettuce, beans, asparagus, zucchini, and flowers, some of which the organizers share with senior residents and sell at their market.

Through grants, Angela continues, workers train young people in the neighborhood in how to grow their own food and tend to a garden, giving them entrepreneurial skills. In addition, Fulton Street is teaming up with other local gardens to form the Lake and Kedzie Garfield Park Neighborhood Market where they hope to build a food incubator and grow a food hub business. “When I first moved into our home, Fulton Street was a drug spot,” Angela says. “Now neighbors can sit on the porch.”

“When they come to Veggie Bingo, they get to meet the people running these gardens,” says NeighborSpace’s Cline. The event has inspired some players, she continues, to begin gardening in their own backyards. 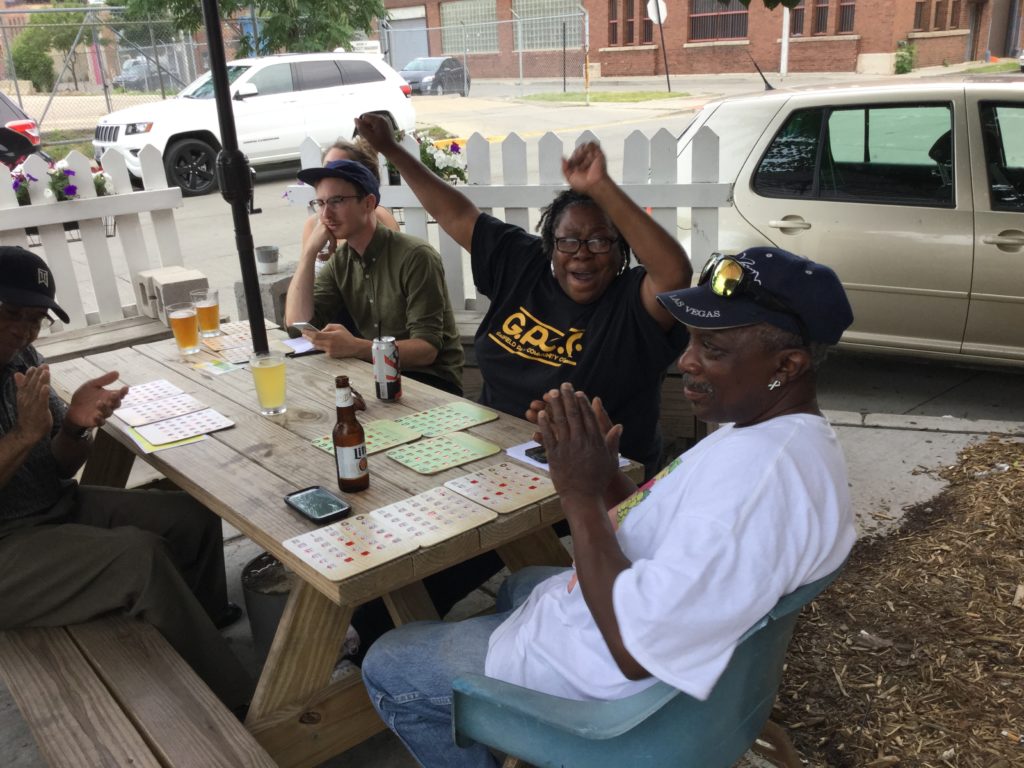 Historically a working man’s bar that catered to steel workers and local scribe Nelson Algren, the Hideout has remained a classic “third space” for both political mobilizing and feeding people, says Cline. It has also been a drop-off location for various CSAs and host of the annual “Farmer’s Talent Show.”

Such locations are needed in neighborhoods that are developing their own food cultures, says Hideout owner Katie Tuten, who also works for Catholic Charities doing research on food deserts and community health. “I am very aware of the importance of community gardens,” Tuten says, “as well as what it means to be a community and the importance of feeding the community spiritually as well.”