Brighter Bites has distributed over 8 million pounds of produce to more than 20,000 families, and nearly 75% of them say the lifestyle change has stuck. 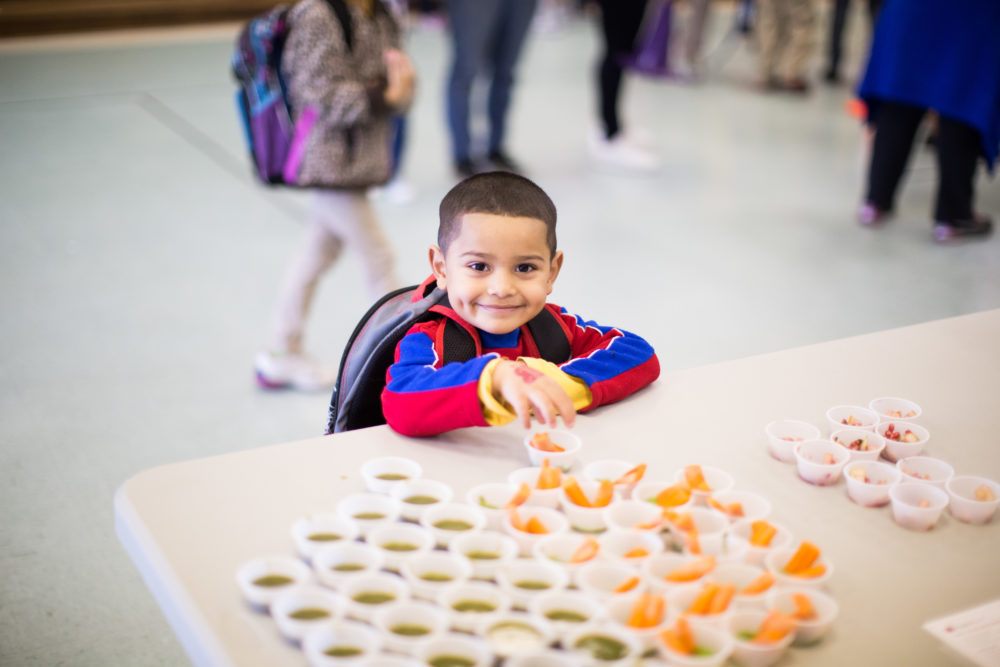 Wendy Estrada-Perez hadn’t tried kale until she received some in a bag of free fruits and vegetables offered at her daughter’s school. “I had always heard about kale,” she says, “but we’re a Mexican family and we eat what we’ve been taught.” Now Estrada-Perez says the leafy green is a regular part of her family’s diet. Kiwi was another new food she was sure her daughter would reject. But when it arrived through a nonprofit called Brighter Bites, her daughter loved it. And she’s not alone.

Hundreds of families have had similar experiences thanks to Lisa Helfman, a 40-year-old Houston real estate attorney and mom of two (pictured below). Helfman conceived of Brighter Bites five years ago after her family joined a Community Supported Agriculture (CSA) program and she noticed how the weekly influx of fresh produce gradually improved her sons’ less-than-perfect eating habits. When her five-year-old spurned a slice of birthday cake in favor of fresh blueberries, a light bulb went off. She recalls asking herself, “How could I do what I did with my son for families living in the inner city?”

Helfman envisioned recreating the CSA experience for underserved parents in her community, thereby improving the diets of their kids. So in the 2012-13 school year, she piloted the program at a low-income Houston public charter school, distributing free produce to the families of 150 fourth graders, once a week for eight weeks in the fall and spring semesters. The Houston Food Bank, which was already collecting unsold produce from local supermarkets and farmers, acted as the program’s supplier, providing between 50 and 60 servings of fresh produce per week. That was enough for two servings a day for a family of four, with each distribution containing eight to 10 different types of fruits and vegetables.

From the beginning, though, Helfman was determined to offer more than a free handout. “People could easily be annoyed,” she says, if they were suddenly burdened with perishable food they didn’t know how to prepare or weren’t inclined to eat. Instead she wanted to deliver the produce in a “thoughtful and dignified manner,” which included tucking into the grocery bags recipe cards for less familiar items and creating a festive atmosphere at the after-school distributions, including passing out samples of the week’s featured recipe.

To get parents further invested, Brighter Bites asked them to volunteer with the sorting and bagging process each week. And to provide an educational component, the nonprofit paid to train teachers in CATCH, a state-approved nutrition and health curriculum for kids. Participating parents were reached through free bilingual materials, written at a third-grade reading level, to teach basic food literacy and cooking skills.

From the start, Helfman also wanted to quantify participants’ lifestyle changes through independent study. So she brought on as her Brighter Bites co-founder Dr. Shreela Sharma, associate professor of epidemiology at the University of Texas School of Public Health, seeking her expertise in designing the program and conducting ongoing studies to see if it really could improve families’ eating habits long-term. 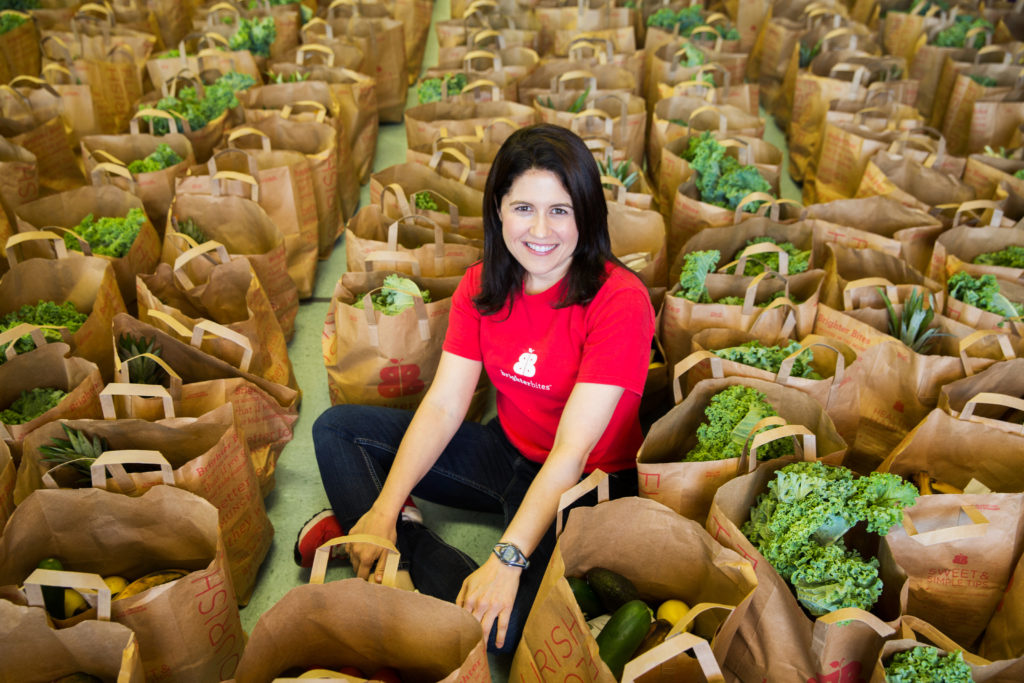 The results of the 2012-13 pilot were encouraging. According to a study published in The Journal of Primary Prevention, 96 percent of the families reported eating all or most of the produce provided each week. They also showed improvements in mealtime practices such as a decrease in eating in front of the television and drinking sugary drinks and an increase in family dinners and children asking for fruits and vegetables as snacks.

Anecdotally, the organization was told that kids were throwing away less produce in the cafeteria because they were used to seeing it at home, and parents were pleased to save around $34 a week on their grocery bills. They also appreciated what Brighter Bites calls the “risk free trial” aspect of the program, which allowed them to experiment cost-free with unfamiliar fruits and vegetables.

Armed with this promising data, Helfman has sought out and received millions in financial and in-kind support to advance her vision. The Texas Department of Agriculture was among the first major supporters, granting Brighter Bites $1.2 million in 2013 to foster its expansion within the state, followed by an additional $500,000 in 2015. (More Texas state funding is likely on the horizon, Helfman says.)

The United States Department of Agriculture (USDA) initially awarded the nonprofit a $148,000 SNAP-Ed grant enabling it to operate in three Texas cities—Houston, Dallas, and Austin. Last September, the department provided an additional $2.4 million in SNAP-Ed dollars, which covers most of the nonprofit’s operating budget.

Perhaps most significant of all is a new partnership with Sysco, the largest food distributor in North America, which could allow Brighter Bites to go national while also helping to tackle the significant problem of wasted “ugly” produce.

Rich Dachman, Sysco’s vice president of produce, learned of Brighter Bites last spring and cold-called Helfman, asking how the company could help. Now trucks loaded with unsalable produce that would otherwise be tilled under by Sysco’s network of farmers head toward Texas food banks, where it’s specifically earmarked for Brighter Bites. (Any extra produce goes into the food banks’ general supply.)

Helfman is thrilled by the new arrangement: “To have this fleet [of 9,000 trucks] behind us is really surreal,” she says. Harvesting potentially wasted produce, she continues, “turns out to be the most effective way to find food for our families. We actually think this is a major opportunity to fix the food waste problem in the country, because we have families that will eat it.”

Promising new data and looking toward the future

All of this external support has enabled Brighter Bites to increase its impact quickly. To date, it has distributed more than 8 million pounds of produce to more than 20,000 families at around 90 distribution sites including schools, Head Start programs, and YMCAs. It’s also brought national attention to the organization, which had speaking slots at last May’s Partnership for a Healthier America summit and a recent Congressional hearing on SNAP-Ed.

The organization’s profile may rise even higher when a recently completed two-year study of 760 Brighter Bites families is published later this year. In addition to corroborating many of the positive findings of the pilot study, Sharma’s research team found that 74 percent of participating families reported maintaining the same level of produce buying and consumption even after the distributions ended–precisely the outcome Helfman hoped for when she conceived of the program.

Estrada-Perez, for example, says that eating more produce has improved her family’s health, ending her children’s chronic constipation and improving her own blood work. Brighter Bites “was seriously a godsend,” she says. “We had it, it changed our habits and now we’re keeping up with it because we feel so much better.”

With the new Sysco partnership and the USDA reportedly considering an increase in the organization’s SNAP-Ed funding, Brighter Bites is now poised to grow dramatically. Still, Helfman doesn’t want to risk the program’s success by expanding too quickly. “Every city takes a thoughtful rollout,” she says. But since Brighter Bites’ survey data has been remarkably consistent across all three Texas cities in which it operates, Helfman believes that replicating those results outside the state is within reach.

“This is all just starting,” she marvels. “And now I think we’re unstoppable.”