A Baseball Stadium Farmers’ Market is a Hit in Fresno

Can more produce in the stands help the residents of this notorious food desert eat better? 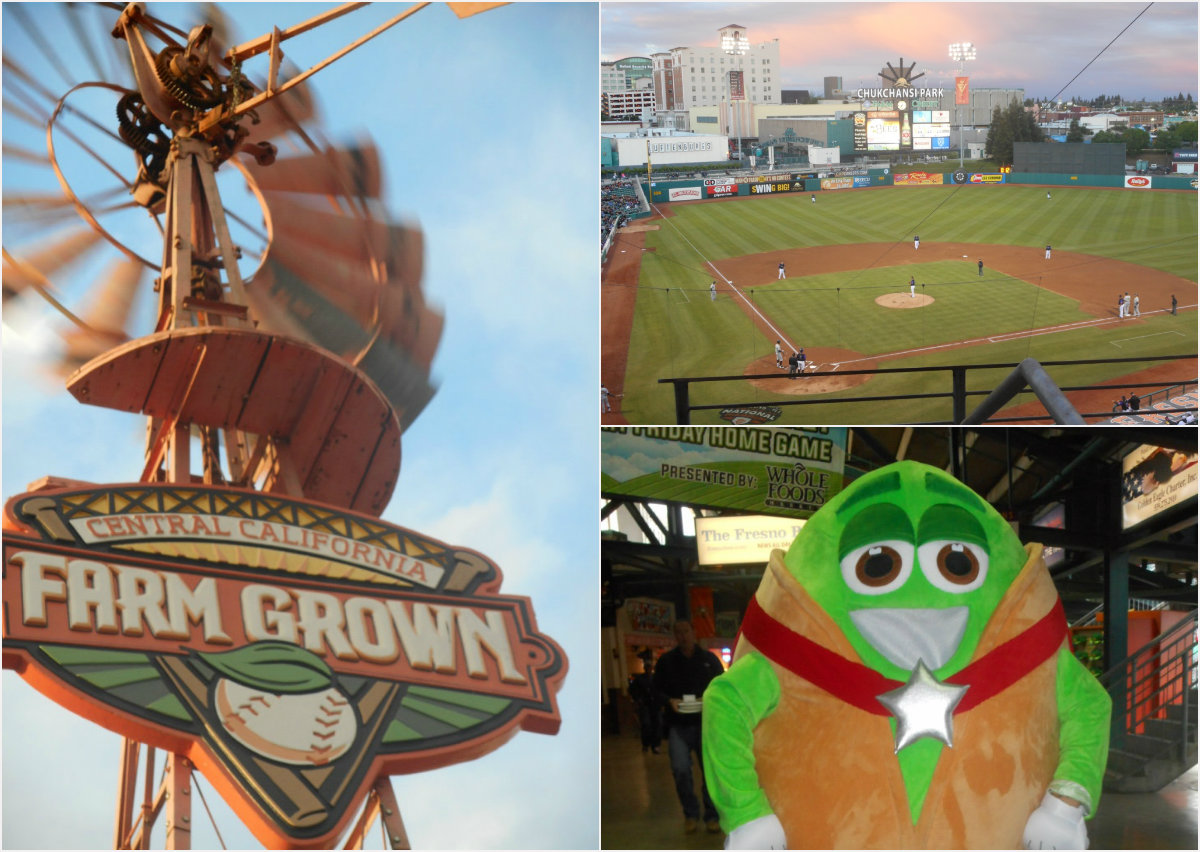 Farm teams are a fixture of the baseball world. But perhaps only in Fresno, California, home of the minor league team the Fresno Grizzlies, has the notion of a farm team been taken so literally.

At the Grizzlies’ Chukchansi Park downtown, the churros, cotton candy, and other junk food that define America’s pastime have been joined by Farm Grown Fridays, a farmers’ market set up at Friday home games that includes a roving “Mr. Pistachio” handing out locally grown nuts while posing for selfies.

In a part of California that has long struggled with poor health outcomes and a lack of access to fresh and unprocessed foods, the market—started three years ago by the team’s community fund—is an attempt to provide fresh fruits and vegetables to fans while simultaneously promoting the region’s major industry.

“It’s catering to the more health-oriented demographic,” said Camilio Vasquez, who was selling “ass kickin’ ginger” and other specialty almonds at the Fat Uncle Farm stand poised above third base on a recent Friday. “This kind of atmosphere at a ballpark alleviates the temptation one might feel to stray,”  he said, meaning gravitating to junk food.

Although the Grizzlies are better known for Taco Tuesdays, a food truck fiesta to which many fans show up wearing foam taco-shaped hats, the farmers’ market has become a novelty for fans and a welcome diversion for those not riveted by every play. For the 15 or so olive oil producers, stone fruit growers, and other vendors, it’s a chance to raise their profile and educate an audience who might not routinely frequent farmers’ markets.

John Hinkle, for instance, a 64-year-old Fresno diesel mechanic turned beekeeper, showed up at a recent game with an observation hive of some 2,000 bees set up within sight of home plate. During the game—fittingly a match between the Grizzlies and the Salt Lake Bees—Hinkle regaled onlookers with educational tidbits, such as the fact that bees have two stomachs. “I enjoy talking about my bees whether people buy honey from me or not,” he said.

At the Doucette Farms stand, four year-old Leela Murguia was sampling apricots with her godmother Liliana Rueles. “We like to keep her interested in new things,” said Rueles. “Now she’s excited about blueberries and apricots instead of Red Vines.”

Using Sports to Connect to Ag

The park, named for a tribal casino and resort in the nearby Sierra foothills, was built 12 years ago as part of a downtown revitalization strategy (the cost of its construction remains a charged issue). For the team of people running it, the farmer’s market, which includes several certified organic growers, is part of a larger effort to celebrate and capitalize on local agriculture.

The park’s periphery is planted with wine and table grapes and olive, pomegranate, and loquat trees, among other varieties, providing a place for 4H-ers and other groups to learn about soil conditions, irrigation, and other topics. The team’s community fund also spends roughly $200,000 a year on outreach to elementary schools in five counties, distributing a magazine and sending staffers to school assemblies accompanied by ag experts and the team mascot, Parker T. Bear.

Big Ag marketing is part of the game: Skybox holders include pesticide producer Bayer Crop Sciences and Gar Tootelian, a major farm chemical business. Tootelian’s charitable foundation also built a promotional “ag zone” with a fake barn and weathervane on the concourse behind left field, outfitted with a sign that asks: “Is Growing Food Wasting Water?,” placing the dialogue firmly on the farm side of the “agriculture vs. the environment” debate that has been raging in the state since before the current drought began.

But alternatives to Ho Hos are also vital part of the conversation. Fresno residents have long been plagued by poor nutrition and physical inactivity, said Genoveva Islas, director of Cultiva La Salud, a nonprofit that promotes health equity in the San Joaquin Valley. The paradox here and across the Valley is that poor communities located in major agriculture-producing counties suffer disproportionately from contaminated air and water, a lack of recreational opportunities for children, and a dearth of healthy food options.

About 30 percent of children in Fresno County are food insecure, according to SNAP data. An index of retail food environments compiled in 2007 by the California Center for Public Health Advocacy is equally grim: Fresno county residents have more than six times greater access to fast food restaurants and convenience stores than they do to healthy food choices.

Since health disparities in the area disproportionately affect Latinos, the demographic impact of the farmers’ market is limited because it is confined to baseball. The roughly 50,000 attendees at Grizzlies games per season are predominantly white, though the team is working on a Latino fan base, James said. The organization owns a minor league soccer team, the Fresno Fuego, which brings in Mexican teams and has a larger Latino presence.

Beyond Fresno, the Farm Grown Fridays program, where some 1,100 Future Farmers of America from around California cheered the Grizzlies at a recent game, is part of a growing emphasis on healthier cuisine at major sporting events. A significant national development has been the addition of rooftop “farms” at dozens of Major League ballparks, from the iconic Fenway in Boston to the San Francisco Giants AT&T Park, with its 4,320 square-foot edible garden beneath the scoreboard.

But despite the greening of baseball parks and efforts by PETA to get them to be vegetarian-friendly, the countervailing forces of the culinary Dark Side run deep.

At the same time, much of America’s ballpark food has been moving in the opposite direction. Since the so-called Boomstick—a 3-pound, 2-foot long hot dog slathered in chili, cheese, jalapeños, and caramelized onions—made its debut at the Texas Rangers Ballpark in 2012, the competition to invent super-sized, never-before-seen novelty items has escalated. Nearly 20,000 Boomsticks, named after the bat used by slugger Nelson Cruz, were sold in the inaugural run, netting an estimated $500,00 in sales.

Since then, nearly every park has created and embraced a weirdo signature food made with highly processed ingredients—from the “Happy Dog” topped with Fruit Loops in (Cleveland Indians) to the Atlanta Braves’ “Tater Top Chop,” in which tater tots are pressed in a waffle iron to create a Panini-like concoction oozing with bacon, cheese, and jalapeños and crowned with Coca-Cola-infused ketchup.

Tom Dickson, the CEO of Professional Sports Catering, which serves minor league ballparks and spring training venues, freely admits that such foods are a marketing gimmick. “Research shows that half the fans at the game don’t know the score,” said Dickson, who owns two minor league teams, the Lansing Lugnuts and the Montgomery Alabama Biscuits. “They come for the experience—and food is a big part of it.”

Shawn Mattox, district manager for Delaware North Sportservice, which manages the food service at numerous ballparks, said that although the “product on the field” is most important, niche items like this year’s Hill Meatball Cone at the St. Louis Cardinals’ Busch Stadium—four meatballs and marinara sauce served in an Italian bread cone topped with cheese—provide entertainment and “enhance the guest experience.”

With teams announcing their latest creations on Twitter—the more bacon the better—healthy options have to struggle to be heard. “It’s, ‘what crazy thing can we sell?’” said John Coppinger, a blogger for foodandsports.com. “It’s like salmon swimming upstream against an eight-paddy cheeseburger.”

Back in “Growlifornia,” as the Fresno Grizzlies call it, the farmer’s market at Chukchansi Park has yet to be joined by vendors roaming up and down the aisles yelling, “Apricots! Get your fresh apricots!”

But Tiffany Stevens, who was manning the Doucette’s fruit stand, thinks tastes are changing. “When people go to a farmers’ market, they expect fresh produce, but when they come to a ballpark they expect hot dogs. Now, when they first arrive they want fruit.” It’s the new pause that refreshes.