The president of the Humane Society of the United States talks about his new book, and the shift he has seen in consumer awareness about animal welfare on farms. 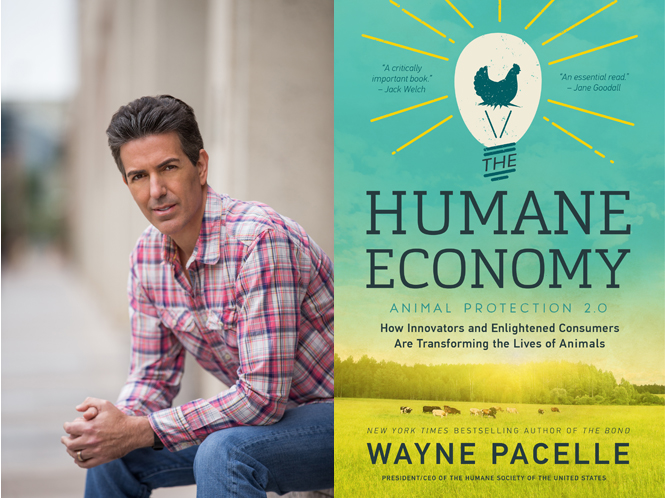 What do chickens in cramped cages and pigs in tight crates have to do with elephants in circuses, orcas at SeaWorld, or tigers hunted down as trophies?

According to Wayne Pacelle, president of the Humane Society of the United States (HSUS), all of these animals are being liberated, so to speak, by a new “humane economy,” in which consumers (including humane meat eaters) are driving corporations to improve their animal welfare standards.

In Pacelle’s new book, The Humane Economy: How Innovators and Enlightened Consumers Are Transforming the Lives of Animals, he argues that within vastly different industries—agriculture, tourism, medicine, beauty—consumers are making their preferences about animal welfare known, largely through what their purchasing choices.

Favoring a product or a company based on its animal welfare policies is not a new concept. (The Body Shop received a lot of attention back in the 90s for being one of the first major companies to oppose animal testing in cosmetics.) But Pacelle writes that today, “there’s a groundswell among consumers who not only believe that animals matter but also put those principles into action and make choices that drive change in the marketplace. This freshly-turned economic soil nurtures legions of hungry entrepreneurs who are imagining better ways to produce goods and services that do less or no harm to animals.”

In the food and agriculture realm, egg-laying hens stand to benefit greatly from this shifting economy. A cascade of restaurants and grocery chains have pledged to stop buying eggs raised in individual battery cages—a practice considered one of the most inhumane in the industry. Pigs will also stand to benefit, as many pork companies are also transitioning away from gestation crates for pregnant sows and toward group sow housing, where mother pigs can walk freely, socialize, and engage in natural behaviors.

These corporate pledges have come about, in part, because of the influence of the HSUS, a nonprofit working on an array of animal issues. HSUS not only persuades retailers to think about where consumer preference is headed, it also facilitates new purchasing relationships between retailers and any industrial food company willing to transition to more humane systems.

“It’s clear we’re on the trajectory of ending extreme confinement of animals in agriculture,” Wayne Pacelle told me in a phone interview. Within a decade, he predicts, the claustrophobic confinement of industrially raised pigs, chickens, and veal calves “will be a thing of the past.”

But how can the HSUS and other farm advocacy groups ensure that these corporations will keep their promises? Without much transparency in Big Ag, it could be hard to know, for example, whether Smithfield will truly phase out gestation crates by 2017, Cargill will end the caging of laying hens by 2018, and the entire veal industry will be crate-free by 2017, as all have promised.

Pacelle says companies should be audited by an independent third party. If they’re not, he says, it wouldn’t be difficult to ascertain from a visual standpoint and from company workers whether “humane washing” was going on. But Pacelle doesn’t think corporations will be deceptive.

“Why would they take the risk?” he said. “If you’re deceiving the HSUS, [the retailer], and all your customers, you’re courting a corporate calamity.”

Many farmers and ranchers have been skeptical of the HSUS, believing that its mostly vegan and vegetarian staff is hostile to the idea of animal farming. But while it’s true that HSUS outreach materials encourage plant-based eating more often than choosing ethically raised meat, Pacelle, a vegan, doesn’t come across as antagonistic to farmers. He notes in The Humane Economy that many farmers are not out to hurt animals, but instead have gotten caught up in systemic forms of cruelty “that people came to tolerate.”

In his book, Pacelle often recounts the time he has spent talking to farmers and other people he may be at odds with, in search of common ground. “I treat everyone as a potential supporter of animal welfare,” he told me.

He also seems to be a realist when it comes to humans’ proclivity for meat. “I don’t have any illusion that we’re going to become a vegetarian or vegan society in the foreseeable future,” he said.

And so, to improve the lives of all the food animals that will likely be raised long into the future, the HSUS has organized a Rural Outreach division and state “agriculture councils” made up of farmers who advise the HSUS on agricultural matters. Pacelle himself is also on the board of Global Animal Partnership, where he works with ranchers and food company executives to come up with 5-step animal welfare ratings for nearly all the meat products sold at Whole Foods stores.

From his vantage point, Pacelle believes that the next frontiers in farm animal welfare have to do with the breeding and slaughtering of poultry. Indeed, other farm animal welfare groups, such as Compassion in World Farming and the ASPCA, are beginning to educate consumers about the practices involved in raising the Cornish Cross, the dominant chicken breed in America. The birds grow so big so quickly that they regularly suffer a slew of health problems. For this reason, Whole Foods announced in March that it wants all of its suppliers to shift to slower-growing breeds.

And, when it comes to slaughter, a few big poultry companies have already switched to “controlled atmosphere killing,” which uses inert gases to render birds unconscious.

In his book, Pacelle credits consumers for sparking change, but he also credits innovators who are harnessing technology and science to help all kinds of animals. He details the projects of a handful of entrepreneurs who are trying to grow in vitro meat, develop plant-based “burgers” in a lab, and create dairy products from genetically engineered yeast.

Pacelle’s book is slim on information about other activists and organizations besides HSUS that have done good farm animal welfare work, and it doesn’t provide much in the way of behind-the-scenes details about the way HSUS works. For instance, it doesn’t go into detail about the unsuccessful but groundbreaking 2011 collaboration between Pacelle and his counterpart at the United Egg Producers, an industry group. The two sides worked together in an effort to pass federal legislation ensuring minimum welfare standards for laying hens, but legislators balked, under pressure from Big Ag lobbyists.

And even though it is vastly easier to find humanely raised animal products on store shelves than it was even five years ago, it’s unclear just how big Pacelle’s humane economy is, as the bulk of our food is still produced on large, factory-sized farms that don’t generally operate in a transparent fashion.

But if you’re feeling powerless or distressed about the state of the world, The Humane Economy is an uplifting read, for it shows how our daily choices really do make change for animals. To paraphrase that famous 1992 comment about the role of the economy in political elections, “It’s the (humane) economy, stupid.”

A version of this article appeared on Humaneitarian.