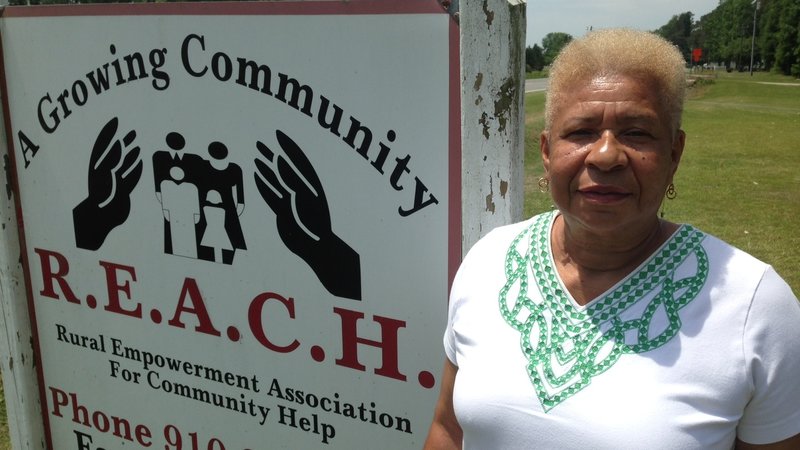 Elsie Herring stays indoors on the days the industrial hog farm next door sprays manure from a lagoon-like holding pit across the field that ends eight feet from her kitchen window. Because a filthy mist coats her property if the wind is blowing from the west, Herring has learned to avoid activities like sitting on her porch, grilling outside, hanging laundry on the line, opening windows, and drinking water from the well.

Herring lives in Duplin County, North Carolina, on a plot of land her family has owned for more than a century. Located in the eastern part of the state, Duplin contains more than 18.5 million confined animals, including 2.3 million hogs. In Herring’s part of the state, pigs outnumber people almost 40 to one.

“You can smell the odor inside,” 67-year-old Herring says. “The feces, the ammonia—all that stuff—we have to breathe it in, because we have to breathe.” On top of physical symptoms like headaches, stomachaches, excessive coughing, watery eyes, and the urge to vomit, area residents often experience anxiety and depression from the sense of helplessness they feel and the lack of relief from the stench, Herring says.

Last week, environmental groups including the Waterkeeper Alliance, Environmental Working Group, and North Carolina Riverkeeper organizations addressed what they see as “yawning gaps in the North Carolina state agricultural regulatory system” by releasing a collection of maps and data on the 6,500 concentrated animal feeding operations (CAFOs)—and their accompanying waste lagoons—in the Tarheel State.

Searchable by county (click below), zip code, census block, and watershed, the maps give detailed information about each operation, listing its estimated animal count and waste output. And they don’t just provide new analysis of pig farms; they also reveal locations of the more than 3,900 industrial poultry operations in the state that have never before been made public. In the coming months, the groups plan to add processing plants and feed mills to the maps and to produce similar tools for other states.

The research, which draws on sources like U.S. Census data and North Carolina Department of Environmental Quality (NCDEQ) records, has produced a few alarming findings. The maps show that hog and poultry operations frequently exist in close proximity to one another, a condition that heightens their harmful effect on waterways, and that they disproportionately affect poor and minority communities.

Christian Breen, the North Carolina CAFO coordinator for the Waterkeeper Alliance, sees the maps and accompanying data as providing the industry with much-needed transparency. While the state‘s DEQ requires swine operations to obtain permits and submit reports, the fact that poultry waste is dry means it is regulated by the state’s Department of Agriculture, which considers farm records confidential.

“The first step in understanding the impact of the industry in North Carolina is knowing the locations of the facilities,” Breen said during a press call last week. “As the state of North Carolina has failed us in providing this information and protecting the people of this state,” he said, environmental groups are stepping up to produce data sources themselves.

The Growing Cost of CAFOs, Especially on Vulnerable Communities

The meat industry has exploded in North Carolina over the last few decades. Between 1992 and 2012, the number of hogs in the state nearly doubled to 9.5 million, placing North Carolina second only to Iowa for its hog farming industry. The state ranks similarly high—third in the country—for its production of broiler chickens, which increased by 60 million to 148 million over the same two-decade period. 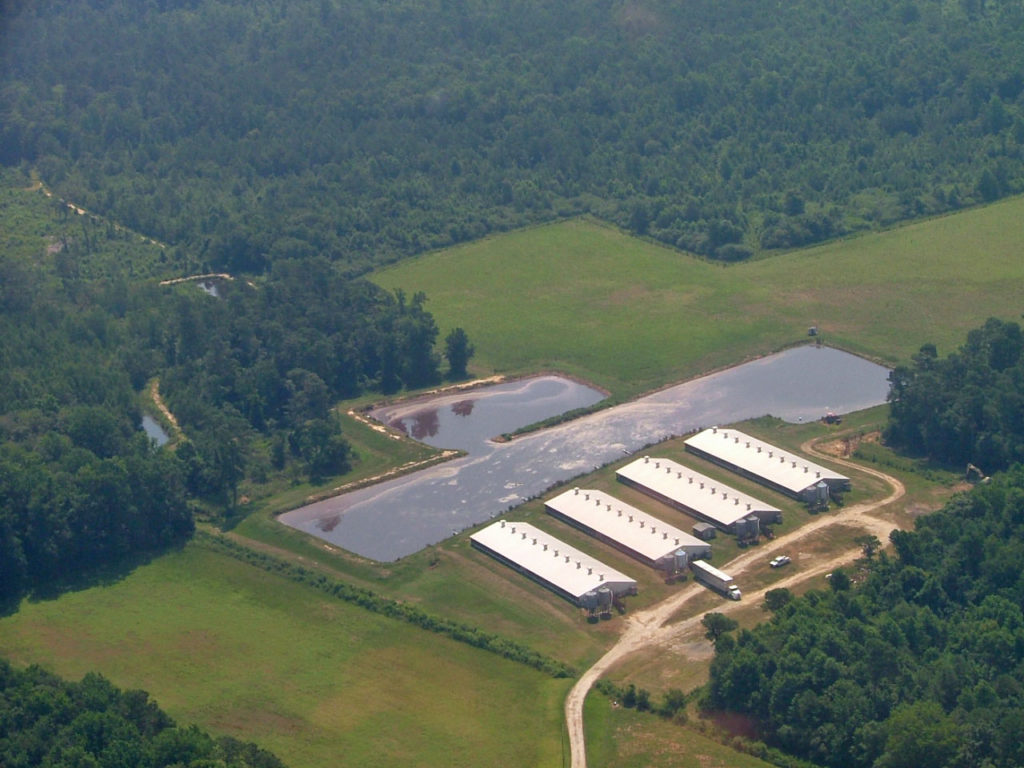 In the 1970s, family farmers raised an average of 60-some hogs per location and let the animals roam around outside, using their waste as crop fertilizer. In the 1980s and 90s, as contract hog growing expanded and the industry consolidated, individual farms became much larger. Today’s farms house an average of 4,000+ animals each. Farms store waste in large, open-air lagoons that turn Pepto-Bismol pink from the colonizing bacteria. They periodically apply the fecal mixture to “sprayfields” of feed crops (at rates that are often too high to grow crops, says Breen of the Waterkeeper Alliance) with high-pressure guns to prevent the lagoons from overflowing.

Recent studies have linked North Carolina’s industrial animal farming operations to water and air contamination. A 2015 study by the U.S. Geological Survey and the N.C. Department of Environment and Natural Resources found elevated levels of ammonia and nitrates, which can kill fish and cause human illness, including the fatal “blue baby syndrome,” in water sources near the state’s CAFOs. In the same year, Johns Hopkins University and the University of North Carolina researchers found that streams near CAFOs were contaminated with hog-related fecal bacteria, including E. coli and Enterococcus.

Additionally, studies have found that air near North Carolina swine CAFOs contains ammonia and “is potentially hazardous for nearby human populations at community locations, particularly homes and schools.” The ongoing stench from the farms has also been shown to raise the blood pressure of some North Carolina residents.

The maps make clear that the highest density of CAFOs exists in low-income communities of color. Duplin and Sampson counties, where 28 to 29 percent of residents live in poverty and a high proportion of residents are Black or Latino, host not only the largest numbers of CAFOs in North Carolina, but in the entire country. The 4.5 million hogs between the two counties produce 4 billion gallons of wet waste a year, which makes up 40 percent of the state total.

“They’re absolutely taking advantage, because we don’t have any money, and we don’t have political clout,” says Herring, who has protested the hog farms’ pollution since 1994. “The people with authority who are supposed to protect us are not listening.”

Catawba Riverkeeper Sam Perkins ascends 1,000 feet above the Catawba River basin in a small plane every few weeks to keep tabs on the waste storage practices of the CAFOs in the Appalachian foothills. Since he started the flyovers in 2012, Perkins has seen the number of poultry operations in his basin increase by 25 percent, to more than 1,000. In addition to the seemingly uncontrolled proliferation of long, silver-topped barns, he encounters another sight that disturbs him: car-sized heaps of uncovered feces sullying the landscape and running off into rivers when it rains. 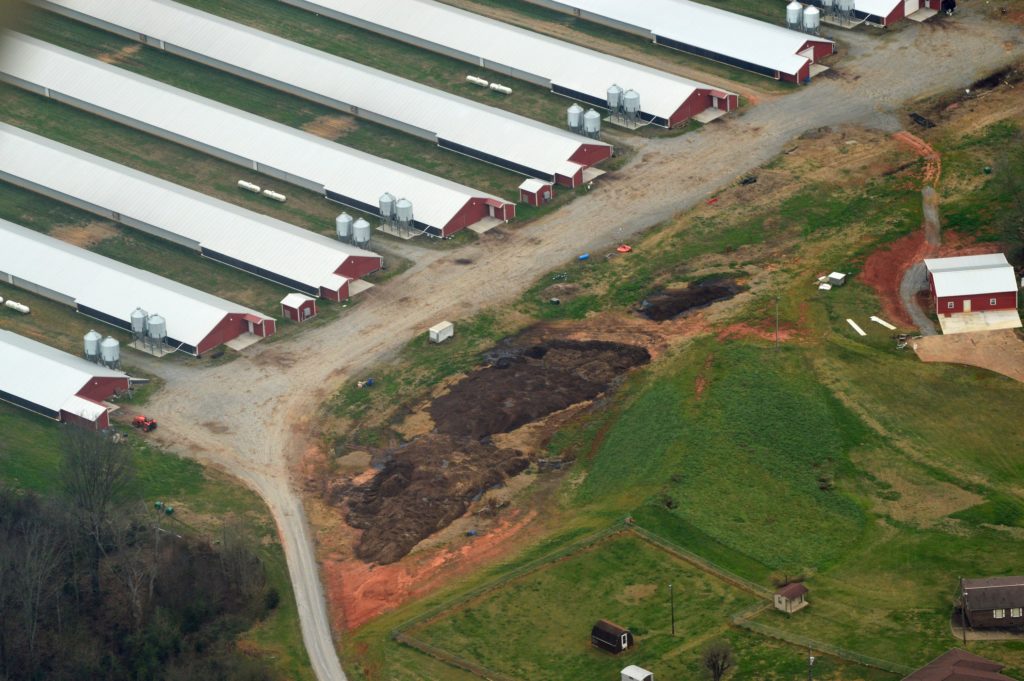 Though Perkins and his colleagues have submitted multiple reports of the uncovered fecal matter to the state, they have not received much of a response. “It’s something that the state of North Carolina has shown little to no interest in taking action on,” Perkins says.

Because chicken waste is “dry,” poultry CAFOs are not subject to the same type of state regulation as the hogs operations, he explains. In fact, he adds, the maps provide unprecedented documentation of the chicken farm locations.

“Poultry is the big exploding problem right now, and we’ve really got to get a better idea of what’s going on with it,” he said.

For its part, the North Carolina Department of Environmental Quality contends that North Carolina has one of the most rigorous permitting programs for concentrated animal feeding operations in the country. “The state environmental department has dedicated staff in seven regional offices who conduct inspections of nearly 2,300 permitted facilities at least once per year,” says Stephanie Hawco, NCDEQ’s deputy secretary for public affairs. “Some facilities are inspected more than once per year.”

Smithfield Farms LLC, the largest pork producer in the world and owner of the majority of the hogs in North Carolina, echoes Hawco’s sentiment, and argues that the Waterkeeper Alliance has a political agenda and is misrepresenting the facts. “There are no secrets about hog farms in North Carolina,” said Don Butler, Smithfield Foods’ director of corporate affairs, in an email. “Hog farms are subject to the toughest regulations in the nation, including a moratorium on new farms that has existed for 20 years. There is not a single hog farm in North Carolina with over 250 animals that doesn’t have a permit.”

Additionally, Butler said, the studies showing that CAFOs contaminate the environment and make people in nearby communities sick are not supported by facts. “The Black River, which runs right through the mapped area, is one of North Carolina’s most pristine waterways according to The Nature Conservancy,” he said. (The Waterkeeper Alliance disagrees.)

Still, the map producers see much room for improvement. They hope the new information will empower people to hold state and federal regulators more accountable for enforcing the Clean Water Act. “For far too long, North Carolinians have been kept in the dark about the true impact these industrial factory farms are having on communities and waterways,” said Marc Yaggi, executive director of Waterkeeper Alliance, in a statement.

Herring, too, hopes the maps will make a difference in her environment. “I am hopeful that this map will bring some light to our situation,” she says, “and how our everyday life is being compromised, and our right to clean water and clean air has been taken away.”

Photos, from top: Elsie Herring lives near an animal farm that sprays waste on her lawn; a screenshot of an interactive CAFO map; a hog CAFO and waste lagoon from above (photo provided by Waterkeeper Alliance); a poultry CAFO from above (photo by Sam Perkins, a Riverkeeper for the Catawba Riverkeeper Foundation).