What happens when the author of the bible of organic grains re-discovers grass? 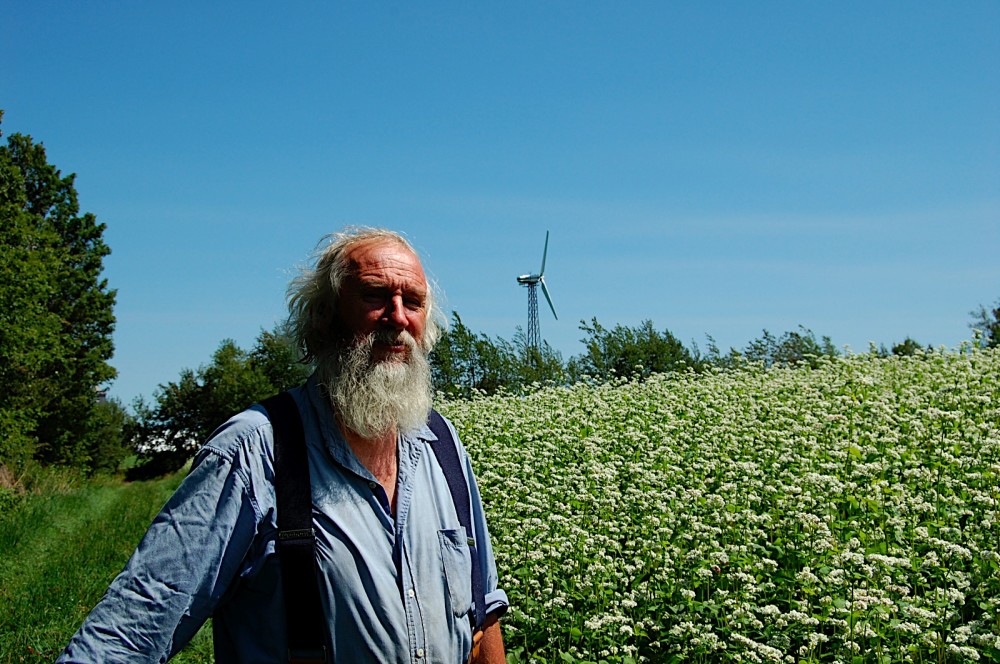 Until recently, Vermont dairy farmer Jack Lazor has been an enthusiastic grain famer. The owner of Butterworks Farm, Lazor spent years growing grains—for animals and people—and then wrote a conversational and encyclopedic guide on grain growing in the Northeast The Organic Grain Grower. In person and on the page, the affable man offers advice on tools and practices for grain growing, harvest, and storage.

Now, he would like to write an epilogue. And he has been composing that imaginary piece of writing as he speaks in front of various groups, most recently 40 people working in the local grain world who gathered for a meeting at the Paicines Ranch in California.

Lazor wore red suspenders over his plaid shirt and ample belly and showed pictures of machinery. He talked about his tractors and seed cleaners like a parent, with equal parts fondness and frustration.

“We started going forward by going backward,” Lazor said of his beginnings with grains. While his wife Anne was finishing college in Wisconsin, he observed how Amish farmers worked. Once the couple had their farmstead in Vermont, they “stooked” or cured their wheat in an old-fashioned style, and people came from miles around to see what no one had done since the 1950s.

Lazor has collected information from generations of farmers, from the Amish to the Quebecois growers he interrogated, 30 miles north of his home. He has gathered equipment that was very old and abandoned, and replaced those machines with newer ones.

Lazor talks and writes about his trials and errors as a grain grower in an engaging, accessible style. Perhaps this is because, at his core, Lazor is a communicator, eager to convey what he’s learned. The Organic Grain Grower allowed him to share the knowledge entrusted to him, and mentor a new wave of farmers.

Yet being a mentor doesn’t mean Lazor has stopped learning. At 65, he is just as curious as ever and ready to try new methods—and a recent period of illness gave him a lot of time to reflect on the big picture of food, farming, and the environment.

“I want to move to a much more grass and legume-based type of agriculture with our dairy herd,” he told the farmers, millers, and bakers at the California event. Given the purpose of this particular meeting—to enable more small-scale grain projects around the country—his announcement was surprising. But he wanted to bring his audience up-to-date.

“As lovers of grain we really need to think about the health of our soils. We have to get over the glory of all this iron,” he said, pointing to his heavy equipment.

Each piece of machinery seems to ask for another, Lazor said. It is easy to get wrapped up in seeking one more screen for the seed cleaner and a better way to dry a crop for storage. In organic production, tillage is the workaround for chemical weed control, and perfecting your tools for the task can become an obsession.

“I’ve got 27 tractors,” Harold Wilken, an Illinois farmer in the audience that day, confessed with a laugh. “I know I’ve got a problem.”

Wilken runs Janie’s Farm, an organic grain farm in an area dominated by large, conventional corn and soy operations. Wilken has moved into into milling and other seed processing, as small-scale grain growers often do. Most grains—food and feed grade—are grown for commodity markets, and regional storage and processing facilities don’t exist. The idea of growing staple grain crops for local use is just reappearing, because most of the markets and infrastructure vanished by the 1930s or so. Consumers are hungry for alternatives to common grain products, but commodity grains are so inexpensive that developing those alternatives is taking time.

As farmers consider feeding that growing consumer appetite, Lazor is cautionary. “We have to think beyond bushels and bins to think about this little mantel of soil that covers the earth,” he said. “There’s more to farming than tilling and planting and harvesting.” As more and more scientific research shows, no-till farming and well-managed grassland both build healthy soil, and that soil retains water in times of drought and absorbs carbon dioxide that would otherwise warm the atmosphere.

Lazor urges people to raise animals as a complement to grains and other row crops.

He also advises farmers to let the land go “back to sod” as often as possible. Grain crops are “heavy feeders,” meaning they deplete soil nutrients that sod crops like alfalfa, timothy, and clover can help restore. He advises long rotations, cycling through different plant families to throw off fungal, bacterial and other plant and soil pests. He also recommends looking into low- or no-till methods, to help protect soil structure and prevent erosion.

For farmers in New England interested in food grade grains, Lazor recommends growing hulless oats because they are one of the grain crops the climate favors. And instead of growing soy or barley for animals, he says, grow animals the best forage grasses you can. Really well-tended grassland supports both animal health and soil health. Photosynthesis is a more direct tool to harvest energy from the sun than growing grains to feed animals, he points out.

That said, Jack Lazor is still planting grains. The granary dominates his farmscape, high atop a hill. Inside, stone mills make Early Riser corn, an open pollinated variety, into cornmeal, and grind wheat into flour.

But right now, he’s also conducting field trials at Butterworks Farm with Heather Darby from the University of Vermont Crop and Soils team, to find out how to grow nutrient dense forage—or the plants present in a pasture. Ultimately, this small-scale grain afficianado wants to short circuit the need for grains as animal feed.

If you climb to the top of the skinny steep stairs in the farm’s mill and look out the cupola, and you will see some farms, but mostly forest and mountains. The Northeast Kingdom, as that edge of the earth is known, might feel like the end of civilization, but the farm is at another beginning. And Jack Lazor is holding the past, present, and future in mind as he tries to cultivate the best ways to live and work with both kinds of grasses—the ones animals can eat directly and the ones that make the edible seeds we call grains.