Mobile Pantries Get Food Where People Need It Most

Mobile Pantries Get Fresh Food to Where People Need It Most 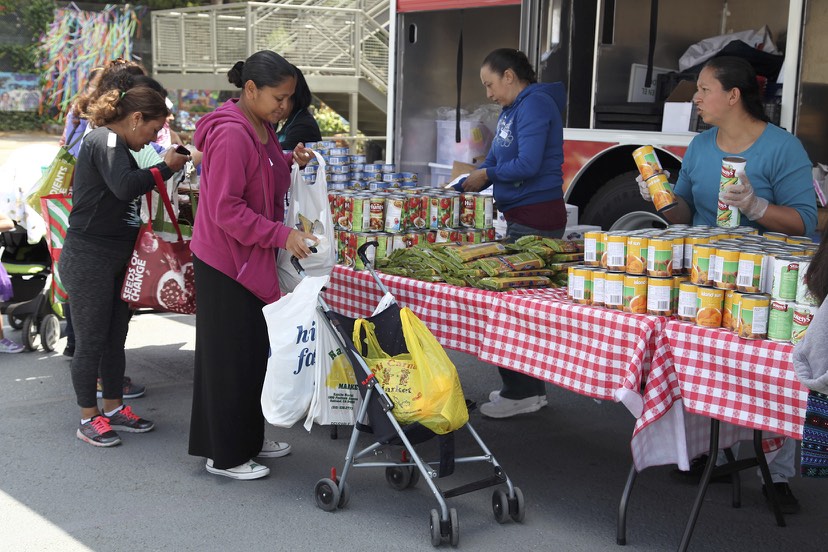 School is letting out, and the back parking lot of Laurel Elementary School in East Oakland bustles with activity. As children stream out of the building, many join their parents and caregivers in line at the bi-monthly mobile food pantry run by the Alameda County Community Food Bank. Together, the children and adults select apples, oranges, and onions from the produce-only pantry.

Guillermo Villarreal, whose daughter attends the school as well, also stressed the convenience. He’s heard of a bigger pantry in East Oakland, but says, “It’s so hard to get there when you have no transportation and you have to borrow people’s cars.”

While the U.S. produces more than enough food to go around, roughly 48 million Americans—more than 15 percent—live in food-insecure homes, according to a 2014 study by the U.S. hunger relief organization Feeding America. Compounding the problem, between 500,000 and 1 million adults will lose their SNAP benefits (formerly known as the Food Stamp Program) over the course of 2016 as their waivers expire.

As providers of groceries, prepared meals, and nutrition education, food banks serve as a vital lifeline for people unable to access the type or quantity of food they need for a healthy lifestyle. Traditional food banks, however, do not reach everyone.

That’s where mobile food pantries like the one at Laurel Elementary come in. Mobile pantries have been around since the late 1990s, but food bank representatives around the country seem to agree that the trend is growing and will increasingly offer a complement to brick and mortar food distribution locations. Managers point to several reasons for the building momentum.

Millions of people in America live in “food deserts,” or areas that lack healthy food providers like grocery stores, farmers’ markets—and in many cases, food banks as well. Because mobile pantries can travel, they can enter these underserved areas and help residents with the logistics of attaining food.

Michael Altfest serves as associate director of communications and marketing at the Alameda County Community Food Bank in the San Francisco East Bay, which runs the mobile pantry serving Laurel Elementary and operates mobile pantries in Alameda communities each business day of the month. “There is plenty of food out there,” Altfest says. “The idea behind the mobile pantry is to bring the food to where it is needed.”

In Alameda County, this often means taking the food to schools where a high percentage of students qualify for free or reduced-priced lunches, Altfest continues. At Laurel Elementary, for example, 80 percent of the students are eligible for subsidized meals.

“All our families are in need to one degree or another,” says Laurel Principal John Stangl, explaining that the fact the mobile food pantry is open to all families at the school, regardless of whether they qualify for free meals, helps “address the stigma and make everybody feel comfortable coming through the line.”

The targeted strategy seems to be working for Alameda county; over the past year, its mobile program has essentially doubled both its number of distribution sites and the amount of food it distributes.

Barbara Ewen, senior director of food programs for Tarrant Area Food Bank near Fort Worth, Texas, explains that the mobile model can be similarly effective in rural areas. Although the actual number of food-insecure people is lower in rural areas, Ewen says, they are more spread out and have fewer resources. “Many small towns in Texas don’t have grocery stores, and if they do have grocery stores, they’re expensive,” she says.

The nimbleness of pantries on wheels makes them especially valuable during emergency situations as well, because they can transport food to where people need it most. The Tarrant Area Food Bank provided mobile services following a 2013 tornado in Granburry, Texas, for example. And since finding out that families in Flint, Michigan, were exposed to lead-contaminated water for more than a year, the Food Bank of Eastern Michigan has been using mobile pantries to distribute lead-mitigating foods, particularly those high in calcium, iron, and vitamin C, to impacted residents. 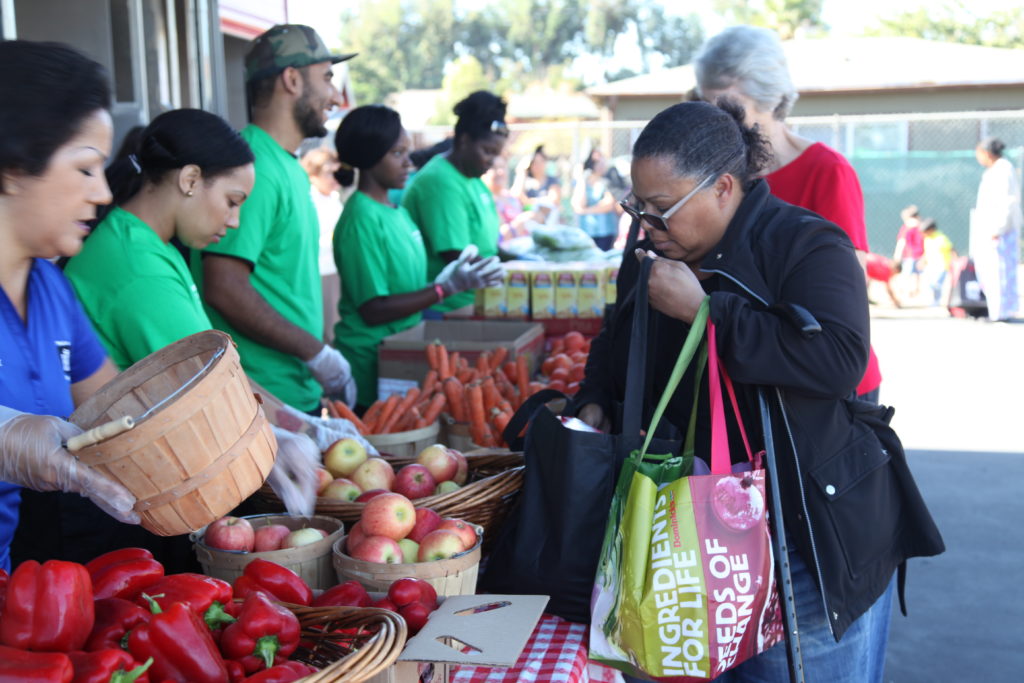 Ross Fraser, director of media relations with Feeding America, says he appreciates the efficiency of mobile pantries, which move food directly from warehouses to the people who need it. Of the 200 food banks in the Feeding America network, Fraser says 170 have set up mobile counterparts.

Mobile pantries also set themselves apart when it comes to fresh foods. “Since these are refrigerated trucks, we don’t have to worry about getting the food somewhere else with refrigeration,” says Fraser. “You open the doors, and voilà, it’s like a grocery store on wheels.”

During harvest seasons, this can be particularly useful. The Alameda Community Food Bank receives a lot of peaches, plums and other stone fruit in the summer, managers say.

In conjunction with seasonal produce, mobile pantry staff and volunteers often find themselves in the position to educate community members about new foods and provide them with recipes. Tarrant mobile pantries have offered a resource on 20 ways to cook beets, for instance.

Despite the many benefits, the mobile food bank model does face some challenges. For Tarrant Area Food Bank at least, the model is more expensive, Ewen says. Large, refrigerated trucks are pricey, typically costing well over $100,000 each, by Altfest’s estimates. What’s more, because mobile pantries are often set up outdoors in parking lots, extreme weather can be a barrier in some parts of the country.

Nevertheless, asked whether she sees the model as likely to expand, Ewen didn’t hesitate: “Absolutely.”

Hers is a view others in the food pantry community share. Fraser, for one, believes the model is “steadily growing,” and Altfest says that Alameda would love to continue to expand the mobile program. “Ideally,” he says, “we would have as many access points as needed for people to be able to access the food.”

Zoe Loftus-Farren is a Bay Area-based writer and associate editor of Earth Island Journal. She holds a J.D. from Berkeley Law and writes about food policy, climate change, and environmental justice. Read more >