A Local Grain Economy Comes to Life in California

Community Grains' effort to bring together farmers, plant breeders, millers, and bakers may finally be paying off. 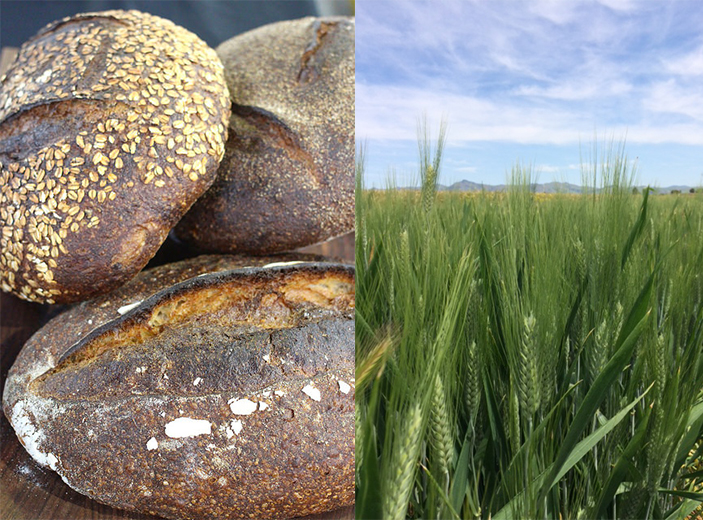 When it comes to buying a local loaf of bread, most food conscious consumers find that supporting a small neighborhood bakery fits the criteria just fine.

But for longtime restaurateur Bob Klein, the owner of Oliveto in Oakland, California, that wasn’t enough. Klein, whose restaurant draws from Northern California’s bounty of vegetables, fish, and meat for its Italian-inspired meals, was troubled that he couldn’t find a local source of whole grain flour to make pasta.

“There’s no fully formed local grain economy in the U.S.,” Klein told Civil Eats after his company Community Grains hosted a conference that brought together farmers, plant breeders, millers, bakers, and researchers. (The first conference took place in 2014). “It takes lots of land and capital to be economically viable.”

Now Klein and his organization are making strides towards putting in place the missing components needed to advance that vision. What’s behind his quest to get locally grown and milled whole grains into the mainstream? Better nutrition, greater consumer availability, and higher prices for grain farmers, Klein says.

Last fall, Community Grains completed a feasibility study (funded by the U.S. Department of Agriculture) showing that bakers were willing to pay over 25 percent more for their organic heirloom wheat flour (grown and milled in California) than the going market price for standard organic wheat.

Most of the so-called whole wheat bread found in grocery stores and artisan bakeries today isn’t made with a very high percentage of whole grains, says Craig Ponsford, a champion artisan baker based in the Bay Area who transitioned to baking with 100 percent whole grains six years ago.

“That’s because the market is geared towards white flour,” he says. “It’s really difficult for the consumer to read ‘whole grain’ labels and understand [what they really mean].”

Because of the industrial food system’s appetite for white flour, grain processing facilities in America are almost exclusively comprised of machinery that strips down the whole grain to its starchy white endosperm as quickly as possible—which effectively gets rid of its more nutrient-dense bran and germ. (The air classifier mill that Community Grains uses at Bay State Milling to grind its flour keeps the bran and germ intact).

This means that farmers have no incentive to grow higher quality wheat, such as organic or heirloom varieties, Klein says.

And what about the few who were doing just that? “The price [the wheat] commanded was 15 to 20 percent less than what the crop was worth,” Klein says. “It’s the disparity between the industrial model and what people value.”

Educating the public about the value of whole grains, Ponsford and Klein agree, is their biggest task in starting to shift the U.S. supply, infrastructure, and market demand needed for local, whole grain economies to thrive. There are a few exceptions, such as Camas Country Mill near Eugene, Oregon, which grows, mills, and sells whole grain; Farmer Ground Flour, located in upstate New York, a collaborative enterprise where the grain is grown, milled and baked for locals to enjoy; and Wild Hive Farm Community Grain project, which operates a farm and mill in New York’s Hudson River Valley.

So in 2009, Klein formed Community Grains with the intention to make that economy a reality. Since then the organization has been producing the grain for its “identity preserved” flours, polenta, and pastas. Each batch is branded with both the name of the grain (such as Hard Amber Durum) used entirely to make the pasta, as well as the farm that grew it, such as Fully Belly Farm). It’s available in Whole Foods Markets specialty grocers across the U.S.

Back then, when Community Grains first approached farmers Fritz Durst (Tule Farms) and Full Belly Farm’s Paul Muller about growing whole grains for the identity preserved products, Klein says he had no problem getting them on board.

“[Farmers] know better than anyone how broken our commodity food system is,” Klein said. “So, I think we all started from the same place, and it had to be a completely alternative system to succeed.”

But there was no large granary that could both clean and store their grain. And Klein soon discovered that this lack of infrastructure restricted the venture’s efficiency and profitability.

“Right now we have kernels of wheat that have been thoroughly cleaned and they’re sitting in a defunct winery facility,” he says. “But we’re concerned about bugs in the warm months, so are so moving it into a rented refrigerated storage facility. If we had our own [cleaning and storage facility], we wouldn’t have to pay for storing it, and moving it in and out.” But, he adds, that’s going to be an expensive addition.

To address this issue, Klein brought on Heather Crawford, a business-minded colleague with the background to determine just how Community Grains can build this infrastructure. The two have found that building a granary and getting it online in California could cost anywhere between $500,000 to $1 million. But with donations from a crowdfunding campaign, as well as help from several investors and banks, Klein says there’s a chance Community Grains could get the structure up and running by 2017.

And while Community Grains has yet to work out the exact details of the business model, Klein says that the goal is make sure it’s profitable and 50 percent owned by the grain farmers themselves.

In the meantime, Ponsford is continuing to experiment with these whole grains. For the last five years, he’s run Ponsford’s Place, his bakery in the North Bay, where he uses only uses 100 percent whole grains such as hard white whole wheat and spelt.

“I’m incredibly disciplined about not using white flour,” he said. “I’m trying to prove a point.”

On a recent Friday morning, his tiny (800 square foot) bakery was filled with customers buying bread and choosing from a display case full of fruit turnovers, cinnamon morning buns, cookies, and quiche.

But what the customers don’t see is the experimental side of the bakery, when Ponsford works during the wee hours of the night with whole grain flour dropped off by several of the same farmers that work with Community Grains as well as a few others. He tests them by making different types of dough and experiments with a variety of final products. “The whole point of this place is to develop skill sets around whole grains and find the best use of each grain,” he said. “Wheat is complicated.”

That’s in part because the type and quality of the soil impacts the quality of the wheat, which in turn can determine if it will be better suited to, say, a loaf of bread or a tortilla.

Ponsford says that he has also been putting pressure on other bakers to start using whole grains. And he thinks he’s having an impact.

“I see a slow shift happening,” he said. “Five years ago my peers weren’t interested. But now I’m seeing more and more bakers using whole grains all over the world.”