Large swaths of Flint, Michigan are now without grocery stores. The Rides to Groceries program is helping people get across town to access the remaining retailers. 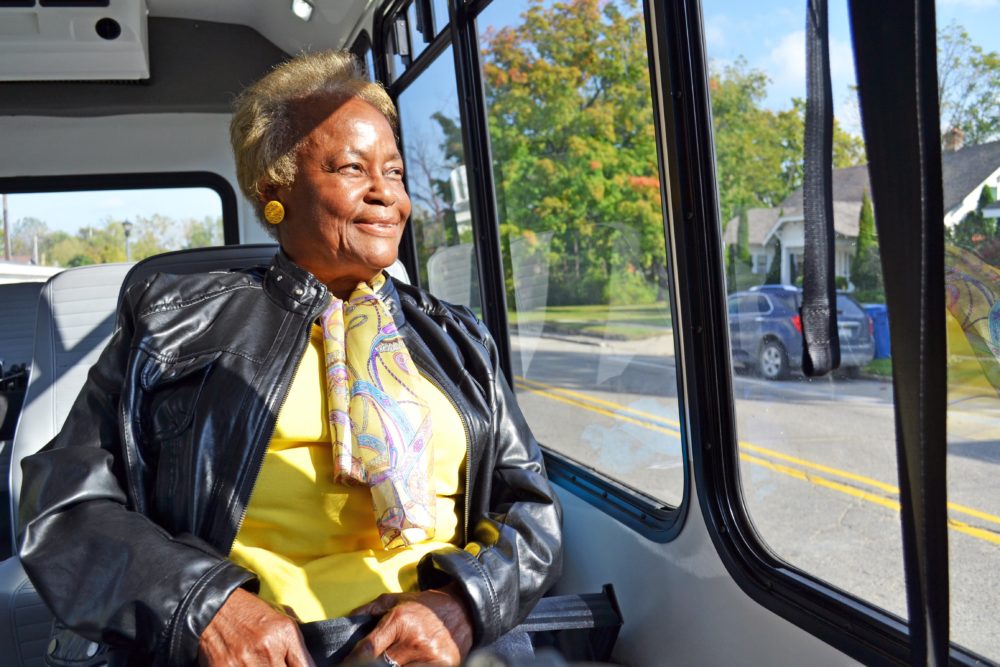 Before Flint, Michigan became synonymous with poisoned water, residents had another major health concern: limited access to healthy foods. Residents were shocked in the spring of 2015 when two of Flint’s major east side grocery stores, part of the Meijer and Kroger chains, closed their doors. The city had already lost a Kroger several months earlier on the northwest side of town.

“The public was wondering, ‘How will people get their groceries?’ There wasn’t a grocery store within four to five miles,” says Derrek Williams, manager of Fixed Route Transportation Services for Flint’s Mass Transportation Authority (MTA). In a city where 42 percent of residents live below the poverty level, many households can’t afford a car to drive to a grocery store across town or outside the city limits.

“Our staff met to talk about what we could do to help people,” says Edgar H. Benning, the Flint MTA’s general manager and CEO, who grew up on the east side of Flint. “We had a real challenge on our hands.”

Last April, Benning and his team introduced a new bus route serving east-side neighborhoods called Rides to Groceries, which takes passengers to the east-side grocery stores, Kroger in the northeast and to Walmart in the southeast. (While the bus also stops near a new grocery store called Fresh Choice Market, few riders patronize the store because of its higher prices.) To make the bus affordable for as many people as possible, the MTA reduced the normal bus rate by half, to just $0.85 each way.

The new bus route took a while to catch on. “The people really didn’t know how to receive it, because no one tailors a bus for a neighborhood,” Williams says. “Our biggest challenge has been getting the people out to ride and understanding that this ride is set up for the grocery store.”

The MTA, which employs a staff of 470 people, launched a publicity campaign by handing out flyers, talking to block clubs, and knocking on doors. Special bus signs with grocery carts dot the route, and recently, the bus was wrapped with a colorful image that includes a shopping cart, fresh produce, and contact information.

In the early days of the new route, an MTA bus driver noticed one rider who was taking the bus almost every day and bringing home only one or two small bags. When the driver told Benning about the woman, he realized she was shopping every day because she couldn’t carry a week’s worth of groceries from the bus stop to her home.

Wondering if other riders had the same problem, Benning sent several of his staff into the neighborhoods to interview passengers. They found that some people had trouble maneuvering from the bus stop to their homes, Benning says.

In response, he decided to develop another option: “We offered another level of service, which would allow people to go from their home to the store,” he said. For $2.25 each way, residents living off the main route can call and schedule pickups and drop-offs at their homes. Similar to the bus route, the call-in service, which relies on a separate vehicle, is available all day, Monday through Saturday.

According to Benning, ridership has grown from 235 people the first month to about 900 per month more recently. “Not only do we have people who use it daily to go shopping, but we also have people who work at those stores and use it,” he says.

Frequent bus rider and Walmart employee Violetta Allen, who used to walk more than two miles both ways to shop and go to work, says she finds the new bus service helpful. “I used to walk from Center Road to work at Walmart,” she says. “The shopper bus brings me all the way out here. Now I don’t have to carry my groceries so far when I get off of work.”

The MTA plans to expand the service to the other side of town and introduce call-in program riders to grocery minibuses. Benning says the MTA has to adapt to the needs of an isolated and aging population. “In some cases, they go to the corner drug stores and are living off what’s on those the shelves,” he says.

The Rides to Groceries bus costs $6,000 per month to operate. Because the fares don’t offset that new cost, Benning has sought funding from the community and from the U.S. Department of Agriculture. So far, the Kroger Foundation donated $15,000; Walmart gave $1,000; and United Way of Genesee County gave $5,000.

“If we wait until the money’s there, we will never get it,” Benning says. “Let’s put it out [there], make it work, and figure out how to fund it.”