How a Former Vegetarian Became a Butcher and Ethical Meat Advocate

Butcher and author Meredith Leigh encourages consumers to consider the life, death, butchering, and preparation of the animals on their plates. 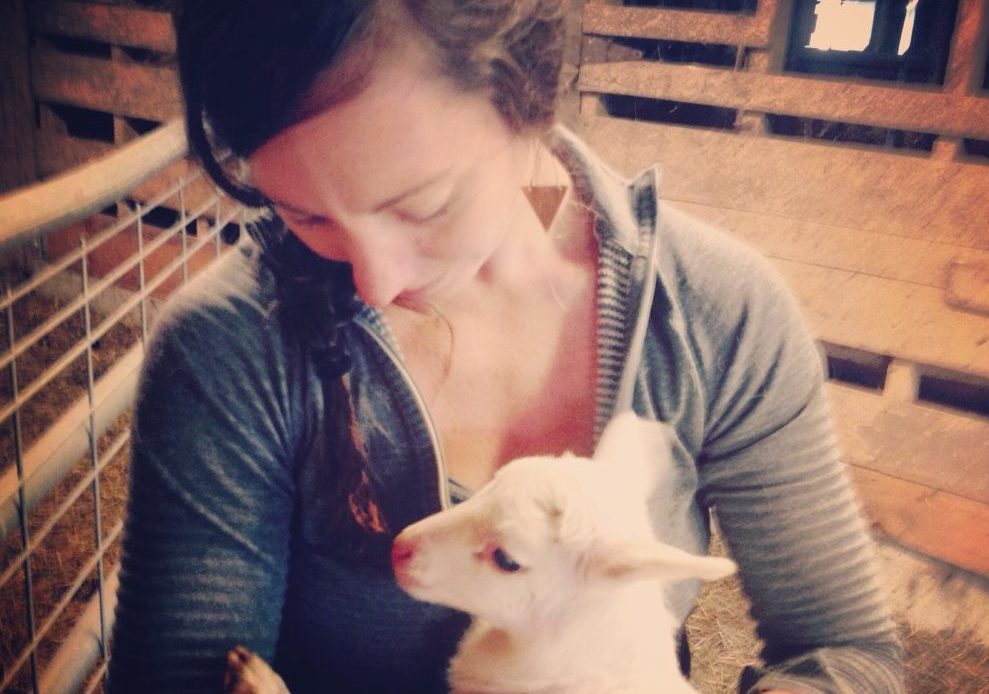 Before she was a butcher, Meredith Leigh was a vegetarian. She was fascinated by plants and loved vegetables—how they grew, the way they tasted right out of the field, how they changed color and texture as they cooked.

But during a trip to Vietnam in 2004—after Leigh had been a vegetarian for nine years and a vegan for two—a woman named Loi served her water buffalo. Aware that Loi had raised and slaughtered the animal herself, the act of eating it became an act of connecting, and Leigh began to consider the idea of ethical meat.

“Eating gained new meaning,” she writes of that experience in The Ethical Meat Handbook: Complete Home Butchery, Charcuterie, and Cooking for the Conscious Omnivore. It was then, she says, “I began my journey into the meaningful consumption of animals.”

Concerned that her previous choice to forego meat had had little effect on the systems by which animals are raised—and virtually no impact on the lives or deaths of those animals—Leigh started to identify with the concept of ethical meat.

Leigh considers meat “ethical” if certain factors hold true: if the animal enjoys a good life and experiences a humane death, if the butcher uses each part of the body, and if the cook prepares or preserves the food to maximize its nutrition and taste. In talking about ethical meat, Leigh describes a system of relationships that involve exchanges of purpose and skill between animal, farmer, butcher, and cook.

Pathway to the Butcher’s Block

After studying agriculture at Warren Wilson College near Asheville, North Carolina, Leigh went on to buy and run a farm with her then-husband in the nearby small, rural community of Old Fort. Like many small-scale farmers, they cycled through various enterprises—vegetables, cut flowers, cattle, broiler chickens—trying to find the profit centers that could sustain their livelihood. They also helped spearhead a farmers’ cooperative in their community, and Leigh served as executive director of the Organic Growers School, an agricultural nonprofit based in Asheville.

For many of her 14 years working the land, Leigh observed and practiced the beneficial integration of livestock into farm systems. In 2013, she and her ex-husband took their study of meat a step further and opened a butcher shop, Foothills Deli and Butchery, in Asheville.

Impressed by her expertise in meat, a publisher approached Leigh about writing a how-to book on home butchery. Leigh was excited for the chance to use meat to make points about the food system and for the opportunity to weave a personal narrative into what could otherwise be a technical subject.

Published in 2015 by New Society Publishers, The Ethical Meat Handbook details the journey of a farmer who has stewarded land, a butcher who has raised and slaughtered animals, and a mother who has pulled calves from the insides of mother cows. “It felt really important to me to put soul into writing about animal farming,” Leigh says.

Over the years, Leigh has increasingly become an advocate for home butchery, a practice in which individual meat consumers buy larger portions of an animal and then break down the meat at home. She maintains that home butchery is a practical yet radical return to a food system that keeps vital relationships intact. Ideally, under this food system, animals enjoy ample space to move and root in the mud; land benefits from the animals that graze it; farmers receive a fair price for their product; and eaters feel empowered by new culinary skills.

“[Home butchery] is not an unreasonable thing,” she says. “You don’t have to break down a half cow, but maybe you buy a top sirloin sub-primal for $6 a pound.” She goes on to describe the butchering process—pulling off the cap, removing the side muscle, and cutting enough steaks to last a family three months. She pauses. “The flip side of that is the farmer is paying a really high price to get it cut and wrapped and selling it for $13.99 a pound. And you touch it as little as possible.”

Since her book was released, Leigh has begun giving humane slaughter consultations and private butchery classes as well as butchery demonstrations in front of packed halls across the country.

Vulnerability and Strength in the Act of Butchering

Both on paper and in person, Leigh’s respect for life and for the land shines through—as does, somewhat unexpectedly, her vulnerability.

In her book, for instance, she includes a scene in which she prepares to slaughter a lamb named Hercules at a friend’s farm. “I drove all the way there with my troubles thick upon my back,” she writes, and then describes the smell of hay in the barn, the look of the lamb’s eyes, and the mountains rising up in front of them as the lamb dies.

Leigh’s acknowledgement of her vulnerability is perhaps why so many people—women especially—feel comfortable approaching her for guidance as they navigate farming or prepare to take the life of an animal for the first time, she says.

“In my work, I have watched many animals pass,” she says. “In my classes, people ask me sometimes how to ensure that it will go well. I’ve even had people ask me if there is a way to make it easier… It is never easy. It isn’t supposed to be.”

As a female butcher, Leigh faces an industry largely designed and occupied by men. She’s made some tangible adjustments—commissioning a custom-made cimeter knife and lowering the height of her work table, for example. But she has also thought a lot about the concept of women and strength.

“As young girls, we are often not taught to use our power to do things,” she says. “I remember leaving the [butcher] shop some days and thinking, ‘I’m not strong enough to do my work. I have to get stronger.’” But then she began to cultivate a different mindset. “Strength is much more of a mind thing,” she says. “Then the body and the muscle respond and grow stronger. [This mindset] has informed the way I parent and the way I talk to other women learning to butcher or farm.”

With her book, Leigh does not seek to change the minds of vegetarians or vegans. Instead, she speaks directly to the people who make the most impact—people who raise, eat, and buy meat—encouraging them to make ethical choices.

“At this point in our culture, the people who will have the greatest influence on the lives and deaths of animals are the people who eat meat, and not the people who don’t,” she says. “I want people to be able to look at the entire system of how meat gets on our plate and to understand that the enlightened consumer has the greatest flexibility to move the needle on good meat. Sure, the farmer has a role, the butcher has a role. But the person with the greatest agility is the eater.”

In the end, when we choose ethical meat, Leigh says, we will taste the difference. “The pig cannot resist the land, and when the pig dies, we eat its body,” she writes. “If we’re really eating, we muse on whether the body is enough homage to the land. Whether we can taste the fog, and the seeds, and the fruit. For the better it tastes, and the better it feels, the better we know it lived.”