After years of planning, West Oakland's People's Community Market may finally come to fruition. Can it help counteract the decades of oppressive policies that shaped today's 'food deserts'? 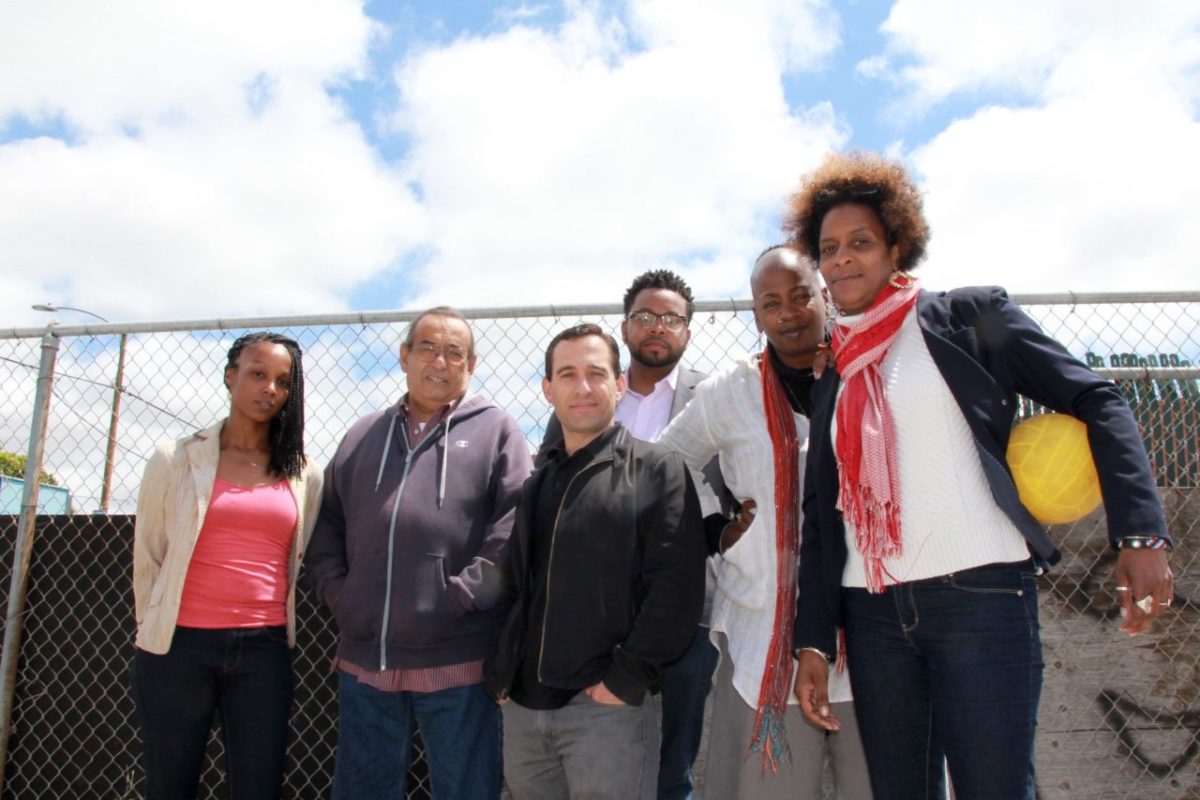 In the late 1990s, Brahm Ahmadi worked on environmental justice campaigns to shut down polluting factories in Oakland’s low-income communities. He lived in West Oakland, a predominately African-American neighborhood, where his work sometimes kept him in his own backyard. As a young organizer, a big part of his job was community engagement. Amidst the ongoing dialogue, Ahmadi repeatedly encountered complaints about the lack of access to a decent grocery store. What he was hearing—from one resident after another—was that they were tired of having to travel to stock up on basic foods.

“For awhile, we’d just say, ‘thank you for input,’ then we’d park it,” says Ahmadi. “But it kept coming up. After awhile I realized it wasn’t just a tangent.”

Eventually, Ahmadi and his colleagues conceded that many of the same patterns of structural and systemic disparity they observed in their environmental justice work helped explain the absence of a community grocery store. But what really moved them into action, was the idea that this isolation was more than an inconvenience—it was a burgeoning public health crisis. In the years since he had moved into the neighborhood, rising rates rates of obesity, diabetes, and other health disparities had come into focus. And the national statistics weren’t much better.

“You could make a map of a community that highlights the environmental justice problem—the polluting, brownfields, superfund sites … and the health issues stemming from those problems, then take another set of maps showing disparity in food access, with a map of those health issues: diabetes, hypertension, obesity, etc. If you put these two maps together, those concentrations, in terms of census blocks, would be virtually the same,” says Ahmadi.

In 2003, Ahmadi and several colleagues started People’s Grocery, a West Oakland nonprofit that tackled food access through a series of multi-scale urban farming enterprises and education programs. Then, after hearing for years that a community grocery store was what the neighborhood needed, Ahmadi left his role as the executive director of People’s Grocery to earn an MBA and invest his energy full-time in making that possible.

In 2010, Ahmadi founded People’s Community Market, and after pursuing it for more than a decade, the organization has finally secured a brick-and-mortar space to host the project. The path to funding the social enterprise has been a hybrid of a grassroots campaign and angel investment. In 2012, Ahmadi began selling shares of the company to California residents through what’s called a direct public offering, beginning at $1,000-per-share. There are now over 400 shareholders.

The initial community investment brought in $1.2 million and a credible negotiating position, but it represented just about a third of the requisite funds to complete the project. Earlier this year, an anonymous angel investor—a retired Wall Street hedge fund manager who grew up in Oakland—provided the capital for the building. Now, Ahmadi is seeking an additional community investment to create “an entrepreneurial solution for the nutritional and social well-being of West Oakland families.”

The market will provide a range of options—from conventional to organic—in an area that still lacks a full-service grocery store. (Ahmadi contends that stocking the shelves with at least some of the low-cost, name-brand items familiar to the community is a critical part of bringing in customers.) He also plans to hire from within the neighborhood, use an employee-ownership model, and work with Community Advisory Council designed to keep the business leadership accountable to West Oakland and its residents.

Ahmadi is one of many people around the country working to bring food to areas with limited access, commonly referred to as “food deserts,” and he believes that understanding the history of these areas is crucial to transforming them.

The Making of the Food Desert

The use of the term “food desert” was first used by a group of British researchers in 1999, who at the time, used the language loosely, calling them, “populated areas with little or no food retail provision.” There is no standard definition of the term, but the U.S. Department of Agriculture (USDA) generally uses it to mean a low-income area with low access to healthy food.

Some food activists and food justice workers consider the term “food desert” a problematic one. They concede it encapsulates a certain set of principles and a narrative, but that it also trivializes what’s at stake—that food is survival. Nationwide, in urban communities, residents suffer from disproportionate rates of obesity, hypertension, and other diet-related diseases.

What’s less often discussed than the term, however, is the fact that these under-resourced, malnourished neighborhoods did not appear by accident. In fact, we can trace the formation of today’s food deserts all the way back to the 1940s, at the end of World War II when young veterans returned to the States with a desire to buy homes.

At that time, in an effort to grow the economy and satiate the new housing demand, the U.S. government launched a series of economic programs to fund (among other things) the growth of suburbs and placement of veterans in much needed post-war jobs. The problem was that these opportunities were not equally available to African-American veterans. In particular, the Serviceman’s Readjustment Act, or the “GI Bill,” adhered to the same discriminatory principles of the legally mandated segregated South. In his book, When Affirmative Action was White: An Untold History of Racial Inequality in Twentieth-century America, historian Ira Katznelson says, “it was deliberately designed to accommodate Jim Crow.”

Over the next decade, Americans built 13 million new homes. Residential ownership became the key foundation of economic stability for a burgeoning, mostly white population. This subsidized suburbanization created a flight of capital and, predictably, resources from urban communities. With redlining, the practice of denying services based on race, many African-Americans and other people of color were forced to remain in these diminishing urban neighborhoods. Redlining was widely practiced and upheld in the 40s and 50s. In cities like Saint Louis, San Francisco, and Baltimore, most of vets who could buy property did so with government support, and that generally meant whites. Of the first 67,000 mortgages insured by the G.I. Bill, fewer than 100 were taken out by non-whites.

Today, the average cost of those homes has appreciated by four or five times, offering one explanation for the fact that African-Americans have just 5 percent of the wealth of white families, even though their average household income is about 60 percent that of white family of income.

Not only were Black veterans ineligible for the same housing benefits as their white counterparts, they were systematically excluded from the bill’s federally-funded jobs and education programs. Universities were segregated, and the Black ones, called, HBCU’s were overcrowded and underfunded. These were just some of the devastating cumulative effects of decades of inequality shaped many Black neighborhoods.

Meanwhile, the way people bought food also changed radically. Small grocers began folding and the supermarkets we know today were born. Many were built in the suburbs, outside the urban centers, to accommodate the new segregated communities.

“Piggly Wiggly was the first one,” says Ahmadi. “They started in the South as a response to white flight. It turned out to benefit that model in a number of ways. They were born of suburban sprawl, on rural land so they could build big … This was the consolidation of little stores into big box stores where they had greater purchasing power with suppliers.”

A Legacy of Descrimination

Fast forward five or six decades, and many of the impacts of these shifts can still be seen around the country. In Philadelphia, where such neighborhoods are common, the Food Trust has been working to improve food access for the last 24 years. Brian Lang, the director of the Trust’s Center for Center for Healthy Food Access, advocates for policies that improve access to healthy food. He describes these historic housing patterns in Philadelphia.

“The departure of grocery stores from communities here in Philly like Germantown was part of white flight and divestment of urban communities,” he says. “Grocery businesses had grown up serving middle and working class white consumers. As folks moved out of the city, some of the folks who remained might’ve been less apt at figuring out how to serve the needs of the people who were living in those communities.”

From Oakland to Philadelphia, countless groups and individuals are working to bring more fresh and healthy food to underserved areas. But neither Ahmadi nor Lang believe that improving access is as simple as opening a grocery store or a farmers’ market in a disenfranchised community. And the research backs them up. For instance, a 2014 study found that national and local policies that increased physical access to grocery stores and supermarkets in underserved neighborhoods was not enough to change health outcomes for residents. And recent efforts to build more big box stores like Walmart in urban food deserts has had mixed results at best.

Just as the circumstances that created these environments are complex and layered, effective solutions will require a nuanced approach. So why then, would Ahmadi spend a decade working to open a 14,000 square foot grocery store in the middle of West Oakland? As Ahmadi sees it, he’s not just out to create a grocery store, he hopes to create an entirely new business model.

Informed by his experience running People’s Grocery, Ahmadi plans to partner with community and health organizations to offer a variety of education programs, like cooking demonstrations and workshops. There will also be onsite health services, such as health screenings. And the market will also serve as a community gathering space, complete with a café service window, and a venue and stage for events and other social activities.

These community-based solutions rely on literal buy-in from the community and the market’s direct public offering offered one way to do that.

Ahmadi acknowledges that it’s not your standard investment. “I need capital that is willing to flip itself over, to turn [the standard capitalist] model inside out,” he says. “The profit is social, environmental, and human health—these are all net benefits. So when I say we need a new business model, this is what I mean. Our profit is in the public good, the public health, which, if you follow the tale, ends up costing real dollars.”

In selling the vision to his investors, Ahmadi notes that the “food as public health” message has been the most effective one. But he says, he’s still waiting on the buy-in from the most important actors in public health, the healthcare providers. Upon learning that the HMO Kaiser Permanente was spending $600,000 annually for the care of a single diabetic patient in Oakland, Ahmadi proposed they make some of those funds available to the market. “Our pitch was, ‘give us that money so they can reduce the risk of diabetes for 100 people, thereby reduce the risk of healthcare cost for 100 people.’”

So far, they’ve declined. But Ahmadi perseveres. The People’s Community market is currently engaged in a second round of fundraising in hopes of reaching the $2 million mark and Ahmadi is optimistic that the store might open in 2017.