Can This Millennial Yogi Transform the Trucking Industry from the Inside? | Civil Eats

Can This Millennial Yogi Transform the Trucking Industry from the Inside?

Caitlin Welby, the new CEO of RFX, hopes to use permaculture to change the way we transport food and other goods. 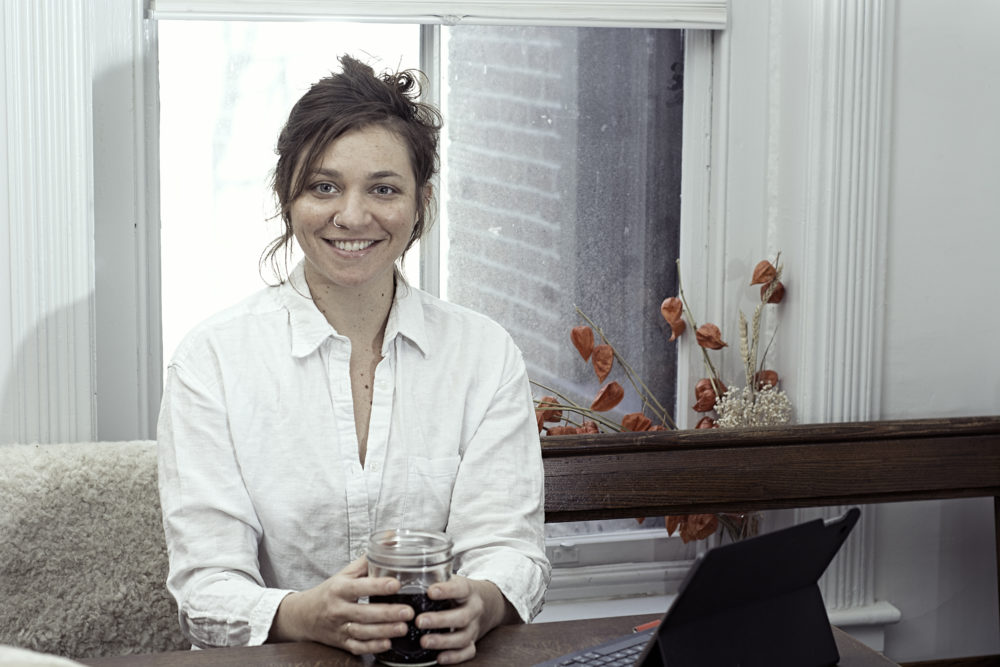 Update: Since October 2017, RFX Inc. has found new ownership in the family with the new owner and CEO, Kimberly Welby.

In 2008, Jann Hedrick, a long haul trucker, went to a clinic for his biannual physical. He’d just finished a grueling round-trip drive between Florida and California and when the nurse took his blood pressure it was dangerously high. He faced hospitalization. Hedrick, then in his late 50’s, rested on a table and thought about how his job was beating him up physically every day. The stress, bad sleep, weight gain, unhealthy food, lack of exercise was exhausting—and worse—it had made him sick.

“I was taking home just under $5,000 a month, good money for those days,” says Hedrick, now 67, semi-retired, and living in Guerneville, California. “But, I called them up and said, I’m done. It wasn’t worth dying over.”

Hedrick still takes blood pressure medication daily. He remembers how, at least for the truckers he knew, the constant stress and need to stay alert triggered cravings for foods loaded with sugar and salt. His driving partner, a 30-year- veteran, subsisted on Subway sandwiches for the coast-to-coast drives. “It’s about calories, and comfort food, and lots of sugar,” recalls Hedrick.

Trucking is a high-risk occupation. According to a 2014 national survey, 69 percent of long-haul trucker drivers are obese; they are also twice as likely as other U.S. workers to be diagnosed with diabetes. And yet we as a nation rely heavily trucks to transport the food we eat and just about everything else we buy and sell, much to the detriment of the estimated 20 million people who work in and around the industry.

These facts are not lost on Caitlin Welby, 34, the CEO and president of RFX Forward, a transportation, trucking, and logistics company that has been owned by her family since 1952. A yoga and ayurveda teacher by training, Welby is conscious of the human and environmental toll the trucking industry takes. For years, she resisted a leadership position in the company, preferring to travel the world, attend art school, and practice ayurveda, yoga, and “vision” coaching. But, in 2013, she returned to the fold as a senior vice president of strategy, and by 2015 she had taken on the role as president and CEO, intent on transforming RFX into a company with a values-based mission.

In April, Welby and her team launched a new initiative they call Permatrucking. They describe it as a “movement” intent on transforming one of the America’s dirtiest industries using permaculture—a design philosophy employed worldwide (most often in farming and landscape design) based on observing and emulating natural systems. Permaculture’s central question is: What does nature to do solve problems?

Welby and her team hope to get like-minded truckers, producers, and shippers on board with the notion. The announcement followed the launch of Hither to Yonder, the new “artisanal logistics” branch of RFX, which aims to help companies, “who are putting a lot of love and passion into their artistry and goods,” to transport their products.

“[In permaculture] you observe the system you’re in and not the idealized one you want to be in,” says Welby, over the phone from the RFX headquarters in Avon, Massachusetts. “This is the system were are in, and [trucking] is the primary mode of transporting food, goods, and all commodities across the United States.”

Welby started small in her initial attempts to shift the culture at RFX. She taught lunchtime yoga classes, and held weekly management meetings that began with gratitude circles and meditation. At town hall meetings, people were invited to chime in on issues while eating organic food. More recently, Welby initiated conversations about wages, health insurance, and nutrition with her fleet of 58 drivers.

During those discussions, she learned that the drivers often “feel left behind by the society they serve.” They also told her they want healthier food, and many are affected from the physical effects of sitting in a car for so many hours at a time. “They know that their backs and elbows and knees aren’t feeling like they should,” said Welby.

For starters, RFX plans to give each driver would a tablet loaded with logistical information along with tricks and tips for getting physical exercise and finding healthy foods such as eggs and oatmeal. The program, called “road hacks” is still in development, as Welby and her team want to ensure that the tablet is something drivers will actually use rather than tossing in the glove compartment. The plan is to keep the hacks simple, but “highly effective.” Tablets will be stocked with short videos that demonstrate an exercise, stretch, meditation, or breathing technique.  The title of the video will include the benefit of the exercise—such as energizing or stress reduction—so drivers know immediately how it might help them.

As Jann Hedrick sees it, getting experienced drivers to change their approach to food and wellness isn’t going to be easy. “You have to figure out a way to make drivers want to do it,” he says. “I’m guessing that almost all truck drivers are money-motivated, period. There is some pride to driving a truck, but most people are trying to earn money to send home.” He suggests a “nutrition bonus,” in which drivers would track wellness efforts, and maybe get a five percent bonus—or whatever the company is comfortable with—for their successes. “Make it easy for them,” he adds.

Welby admits that feeding drivers food that they want and is good for them on long rides will be a challenge. To this end, she often asks herself: “Where is the balance between getting live, spiritually light-filled foods out to everybody, and getting enough calories to people when they need them?”

Aside from food and wellness, Welby wants to apply permaculture principles to solving other vexing trucking industry problems. Toby Hemenway, a permaculture teacher and author of Gaia’s Garden and The Permaculture City says, he likes the the idea of applying permaculture to the trucking industry. But doing that might mean shifting away from cross-country transport in order to re-localize food systems. “If we could create more locally resilient trucking networks—where things are grown locally and shipped locally—truckers wouldn’t have to make such long hauls,” he says.

Welby agrees. She says she is in “absolute alignment with building locally resilient trucking networks”—for the benefit of the environment, but also for truckers who get to stay closer to their families, and consumers who might gain better access to local foods.

A recently announced partnership between RFX Forward and Daily Table—a nonprofit grocery store focused on providing under-served populations with food that might otherwise go to waste—could mark a move toward a more local focus for the company. Welby connected with Daily Table founder Doug Rauch at a conscious capitalism summit last year. Then, in April, RFX officially signed on as the “strategic” logistics partner to assist the grocery company by transporting foods like excess produce. The store is located about 16 miles from the RFX headquarters.

Welby acknowledges that the truck driver wellness programs and local logistics partnerships are only the beginning of a larger dialogue about the trucking industry—and about how permaculture principles might be used to solve larger problems.