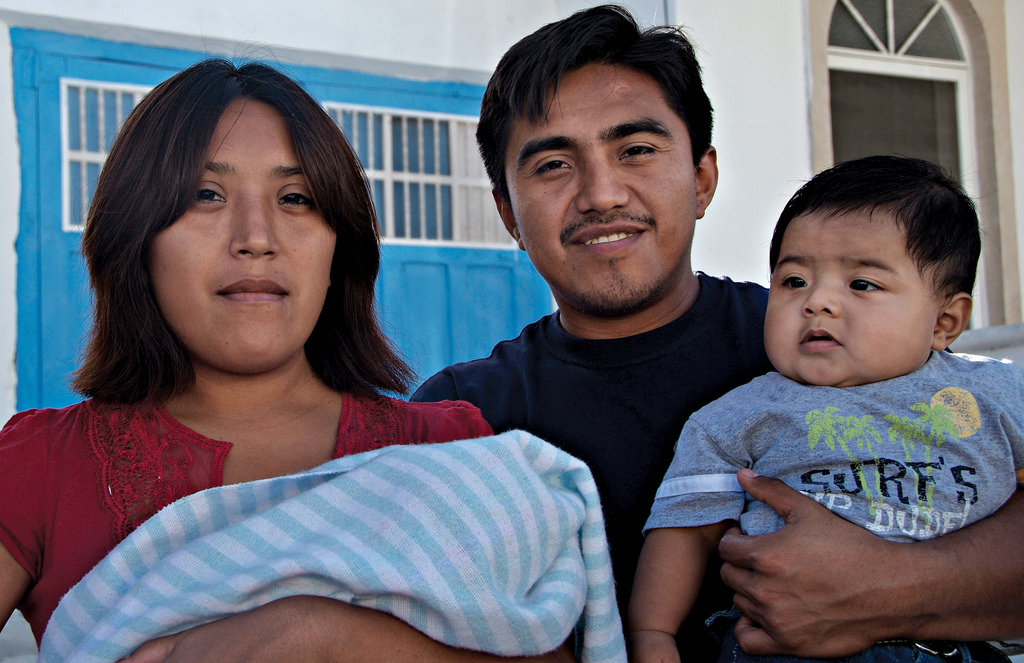 If you’re an urban parent, you might spend time worrying about your children’s exposure to pesticides through the foods they eat and the lawns on which they play. Now, a new look at kids living in agricultural communities might put those concerns in perspective.

The report out today from Pesticide Action Network (PAN) found that children in rural and agriculture communities across the United States are effectively exposed to a “double dose” of pesticides. They’re exposed both directly, through pesticide drift, and indirectly, through the residue that makes it home on their family members’ bodies and clothing. At the same time, PAN researchers say many children in rural communities also experience economic and social pressures that can exacerbate the adverse health effects of these chemicals.

What’s worse, there is now increasingly solid evidence linking pesticide exposure to an array of childhood cancers—particularly leukemia and brain tumors—which are on the rise, as well as adverse impacts on children’s neurological development. Yet despite mounting evidence that rural children are in very real danger, they are still not being protected, says PAN.

“Science for the past many years has underscored that children are disproportionately impacted by pesticides,” said Paul Towers, PAN’s organizing director and policy advocate. “This report shows that even small doses can have effects. It underscores the need for comprehensive and significant protections for children in agriculture communities across the country.”

Childhood Cancers and Neurological Problems on the Rise

At the same time, according to the Centers for Disease Control and Prevention (CDC), an estimated 10 to 15 percent of all babies born in the U.S. have some type of neurobehavioral development disorder. Yet even more may suffer from such problems on a level that may not receive clinical diagnosis. Some birth defects linked to pesticides are also on the rise.

Bruce Lanphear, Simon Fraser University professor of health sciences, finds these numbers disturbing. And he says the link to pesticide use has become undeniable.

“The big news in the past five years,” he says are not only individual studies linking pesticide exposures to adverse health effects, but also meta analyses that show these connections to be increasingly solid. “What they’ve compiled in this report is that evidence is mounting and we can do something different,” says Lanphear.

Evidence of this direct correlation matters because, he adds, “these are the analyses that we rely heavily on to make decisions in public health.”

For example, as Columbia University public health and environmental health sciences professor emeritus Robin Whyatt explains, evidence linking exposure to organophosphate pesticide during pregnancy and right afterwards to impaired brain development in children is now extremely strong. This includes results from what’s known as the CHAMACOS study, which has been following 600 children in California’s Salinas Valley to study environmental exposures—including to pesticides—and children’s health since 1999.

The researchers working on the study have found evidence linking organophosphate exposure to decreased lung function, lower IQ, reduced cognitive skills, increased attention problems, and—for babies who were exposed prenatally—poor muscle reflexes. These neurodevelopmental connections seem increasingly strong since such impacts have also been shown in studies looking at children’s learning ability and behavior, in lab studies with these pesticides, and now in brain scans.

As in the case of lead poisoning in the water supply in places like Flint, Michigan, these impacts can have lifelong consequences. “We’re seeing pretty significant, harmful effects on how the child learns that will have effects on [his or her] prospects later in life, including economically,” says Whyatt. And this data is consistent across many studies, she explains.

Whyatt adds that the focus of PAN’s report is “really important.” There are usually significant disparities in what rural children experience, including children of Mexican American farmworkers, as has been shown in several California studies, she explains, noting “they’re not getting the same protections other people have.”

Exposure at Schools and at Home

Pesticide exposure at school is one of the biggest factors for kids in agricultural communities. One California Department of Public Health report found that hundreds of thousands of children—nearly 500,000 by some estimates—go to a school that is within a quarter mile of a field that is treated with pesticides the state considers of “public health concern.”

Whyatt calls the quantities of pesticides drifting into schools “critical” in terms of children’s health.

California, where most of the nation’s fresh produce is grown, has some of the highest pesticide use in the country, and is now drafting what would be first-of-their-kind statewide rules that would restrict hazardous pesticide use close to schools. Most counties in the heavily agricultural San Joaquin Valley already have some rules limiting the timing and location of pesticide application, Tower explains.

But the latest science and air monitoring data suggests that those rules don’t provide adequate protection. For one, many pesticides can persist for days after they’re applied, so limiting application times to when children are not at school may not be enough. This is especially true in communities where families use school grounds as playgrounds outside school hours.

According the U.S. Census data, children in rural areas are also more likely to live in poor families. And increasingly, public health professionals consider poverty to be a health risk. The stressful situations and nutritional deficits that often accompany poverty can also increase children’s susceptibility to disease and to the health impacts of environmental contaminants.

One California study found that the counties where the most farming takes place have the highest rates of food insecurity in the state. Lack of access to health care can increase these vulnerabilities. Add pesticides into the mix and kids in farm country are particularly left in the lurch, the PAN report notes.

Pesticides, says Lanphear, “are easily one of the top things we should worry about in terms of children’s exposure to toxic chemicals.” We know a lot now about older pesticides, he explains. But there are many new ones. And while there is less evidence of adverse health effects for these, “that’s because we haven’t looked yet,” he explains. “We shouldn’t find this reassuring,” he adds.

Will This New Information Bring About Change?

So what can be done? Certainly for some pesticides with clear risks, such as organophosphates, “we know enough to regulate,” says Whyatt.

“We now have sufficient evidence to find ways to dramatically reduce exposure and find alternatives,” says Lanphear. For consumers, that means buying certified organic foods and those treated with little or no synthetic pesticides. The PAN report also recommends supporting farmers while they’re making transitions away from the commonly used pesticides that are most harmful to children and making sure schools and other public institutions include a substantial portion of organic and pesticide-free food in their meal programs.

The California Department of Pesticide Regulation received more than 2,000 public comments about its draft rules restricting pesticide use near schools. The Department is now reviewing those comments and preparing an economic analysis of the proposed regulation. The rules are expected to be released this summer.