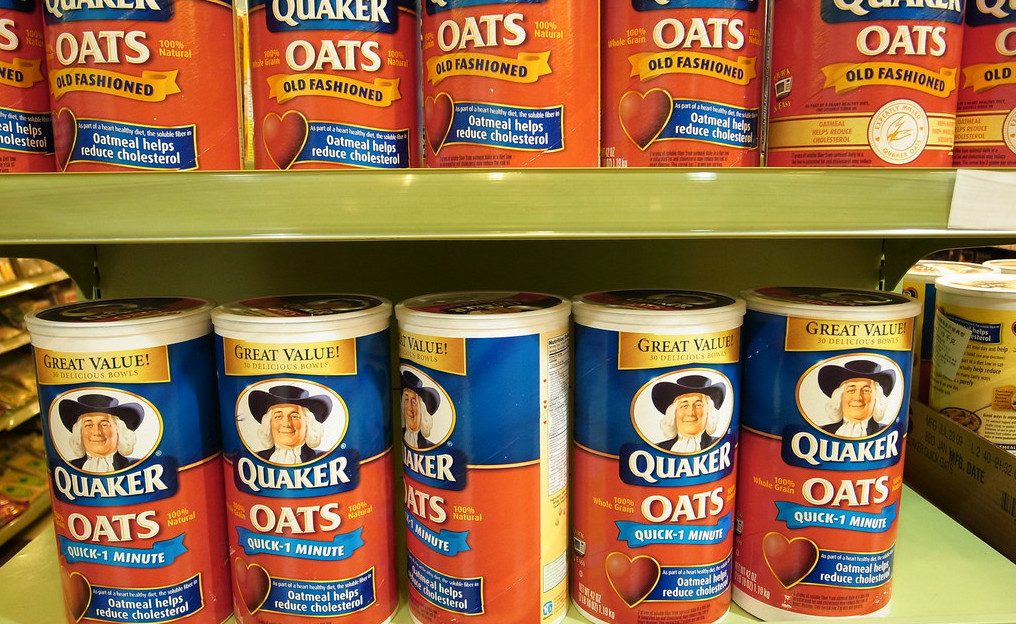 Happy May! Start off your month in the know with this week’s food news.

A proposed class action lawsuit against Quaker has been filed on behalf of consumers in New York and California with more states potentially on the way. The lawsuit accuses Quaker—a PepsiCo subsidiary—of false and misleading advertisements, for asserting that its oatmeal is 100 percent natural. A test paid for by the plaintiffs representation, the Richman Law Group, found glyphosate at a level of 1.18 parts per million in a sample of Quaker Oats Quick 1-Minute (or roughly 4 percent of the 30 parts per million that the Environmental Protection Agency allows in cereal grains). Quaker cites its cleansing process as a potential culprit. “Any levels of glyphosate that may remain are trace amounts and significantly below any limits which have been set by the U.S. Environmental Protection Agency (EPA) as safe for human consumption,” the company said. In addition to consumer refunds, the plaintiffs are also asking that PepsiCo either be required to reformulate the oatmeal or disclose the presence of glyphosate in it.

On Monday, the EPA removed an online report it had posted that concluded glyphosate was unlikely to be carcinogenic to humans. The agency claimed the document was published inadvertently and incompletely—despite the fact that a Reuters reporter reported seeing the word “FINAL” stamped on each page of the report, which was dated October 1, 2015. Last year the World Health Organization classified glyphosate as “probably carcinogenic to humans.” The EPA says it will take into account the position of other global governments and research from the U.S. Department of Health and Human Services as they finalize their position on glyphosate. The EPA say a peer-reviewed assessment addressing their conclusions will be completed by the end of 2016. In addition to the cancer assessment report, summaries from three 2015 meetings between EPA officials and Monsanto were also removed, including one discussing possible label amendments to two of Monsanto’s Roundup products when used on oilseeds, fruit, and other crops.

The Senate has failed to advance a bill that would have essentially blocked state-level bills requiring the labeling of genetically modified (or GMO) foods. Chuck Grassley (R-Iowa) had hoped to pass the bill before Vermont’s labeling bill goes into effect this July, but now says there is “zero” chance Congress will approve the bill by then. “I don’t know where we go from here,” he told the Des Moines Register. Lawmakers protecting the rights of large food manufacturers claim labeling would be too great of an expense on the businesses and subsequently the consumers to require custom labels for each state. But consumer advocates say they have a right to know about the agricultural practices behind their food. Meanwhile, many large manufacturers, like Mars, General Mills, Kellogg’s, ConAgra, and Campbell Soup, have all preemptively announced their own GMO labels.

Due to the Freedom of Information Act, scientists at state-funded universities have been forced to disclose emails revealing intimate contact with with the public relations arms of biotech and organic food companies. Last year, the American Egg Board was forced to turn over documents that showed its president tried to organize a public relations campaign against an emerging product called Just Mayo. Now, the Egg Board and all other commodity research and promotion programs (also known as checkoff programs), may be shielded from the public. As part of its annual budget process, the House Appropriations Committee has requested that FOIA not apply to checkoff programs, which are funded by the industries they are designed to promote the industry with ads such as “Beef: It’s what’s for Dinner.” The programs are also controversial because they use government authority to collect money for private companies (and, in most checkoff programs, all the farmers of the said commodity must contribute to the fund).

This summer, the New York Times will launch a partnership with meal-delivery startup Chef’d, to sell ingredients for recipes from its NYT Cooking website. The iconic newspaper publisher continues to seek new revenue to offset furthering declines in print sales. The Times and Chef’d will split sales from the venture that sends ingredients to readers within 48 hours. Last year, circulation and advertising accounted for about 94 percent of their total revenue. What the media company defined as “other revenues” included rental income, conferences, and e-commerce, all of which generated $95 million in sales. Food delivery business is booming. Companies like Blue Apron have seen tens of millions of dollars in investment in the last few years, and former New York Times food columnist Mark Bittman even left to work for a vegan meal delivery startup called Purple Carrot.

After ‘The Biggest Loser,’ Their Bodies Fought to Regain Weight (New York Times)

“It is frightening and amazing,” said Dr. Tim Hall, an expert on metabolism at the National Institute of Diabetes and Digestive and Kidney Diseases when discussing the resting metabolism of the former contestants of the reality television show, the Biggest Loser.  The resting metabolism determines how many calories a person burns while idle and it was the subject of an multi-year study Hall and others did on the show’s contenstants. When the show began, the contestants had normal metabolisms. This meant they burned a normal number of calories for people of their relative weight. But at the conclusion of the show, their metabolisms had slowed radically and their bodies were not burning enough calories to maintain their new, smaller sizes. The researchers also found that plummeting levels of leptin, a key cluster of hormones that control hunger, may have also played a part.

On Tuesday evening, the U.S. Centers for Disease Control and Prevention (CDC) announced an outbreak of the deadly Listeria monocytogenes bacteria. Frozen fruits and vegetables are thought to be the cause. Listeria is much less common that other foodborne pathogens like salmonella or E.coli, but it is the most lethal. Although most healthy immune systems can stave off an infection, if the bug makes it into the bloodstream, it kills one in five victims with listeriosis. Those with weakened immune systems are particularly vulnerable. Listeria has been most commonly found in ready-to-eat deli meats, and soft cheeses made with unpasteurized milk. So far, the CDC has reported eight people who have been sickened—six in California and one each in both Washington and Maryland. The patients were all between 56 and 86 years old. The FDA has advised that consumers checking their freezers against UPC codes and “best by” dates on the vegetable packages in their freezers. Here’s the FDA’s list.


In a unanimous vote, Oakland, California’s City Council voted to place a soda tax on the November ballot. If approved, the city would join neighboring Berkeley, as the second city the nation to add an extra fee onto the cost of sugar-sweetened beverages. The measure, sponsored by councilwoman Annie Campbell Washington would levy a penny-per-ounce fee on sodas, energy drinks, fruit-flavored beverages and more. The measure requires a simple 50 percent majority plus a single vote majority in order to pass. The revenues, expected to be somewhere between $6-$10million, would be spent on health programs. Washington says she expects the soda industry to put up a big fight. When similar measures have come up in other markets (such as Philadelphia and San Francisco), soda companies have spent big on counter-advertising arguing that such taxes unfairly affect the poor and place outsized blame on the companies for complex public health issues. A long list of public health and community groups have already indicated their support for a soda tax in Oakland.

Meanwhile, former New York City Mayor Michael Bloomberg is backing a campaign to pass another sugary-drink tax in Philadelphia. Bloomberg has long been an outspoken critic against soda companies, and proposed a number of anti-sugar campaigns (including one that would have capped the size of sugary beverages) while he was mayor of New York. His charitable foundation, Bloomberg Philanthropies, funded commercials in Berkeley that ran during the World Series and he has also has invested in the Mexico, where a similar tax has been instituted. Surprisingly, it is Bloomberg himself—not his foundation—that is putting up the money in Philadelphia. It will go to the nonprofit Fair Future, which is launching an $825,000 ad campaign to counter the $2.5 million (and counting) investment by the soda industry.