Can a new campaign help the city's street vendors support their families outside the black market? 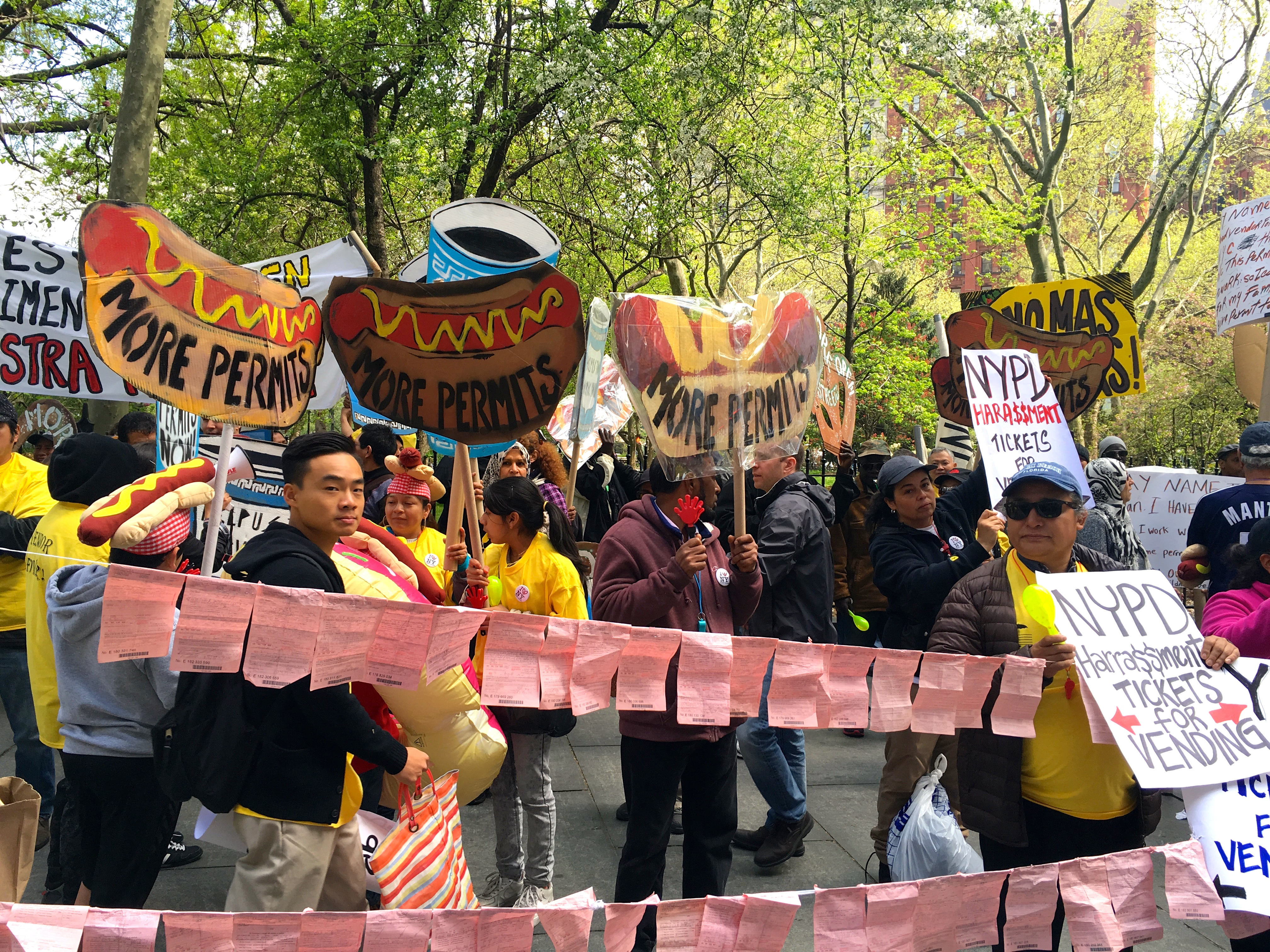 At a rally in downtown Manhattan last week, a group of street vendors held up signs covered with images of New York City’s most famous street foods: hot dogs, pretzels, coffee, and tacos.

Their intention was not to entice potential lunch hour customers, however. Instead, their signs read: “Feeding NYC feeds our families” and “We need a permit to serve you” and the group chanted “vendor power! vender power!”

“Today, there are children, parents, mothers, fathers … here from across New York City and across the country,” said Sean Basinski, director of the Street Vendor Project (SVP), the advocacy organization that organized the rally. “The vast majority of these people sell food and merchandise on our streets every day. They’re not asking for help from anybody, just the simple right to work legally.”

Basinski and the vendors had shown up to draw attention to the lack of available permits for vendors, which has created a black market for the permits, as well as a system rife with tickets, fines, and arrests that make it hard for many vendors to make ends meet.

In 1981, New York’s City Council placed limits on the number of vending permits, capping it at around 4,000. “If you want a permit today, it’s totally impossible,” explains Elise Goldin, SVP’s senior organizer. “There was a waitlist but that waitlist is closed.”

As a result, says Goldin, individuals who bought permits for as little as $200 before the cap was enacted now sell them on the black market for up to $25,000. Many vendors at the rally confirmed that fact.

“I’m running my business on somebody else’s permit, so actually I’m paying that guy—which I’m not supposed to—instead of the city getting the money,” said Ali Muhammad, a Manhattan fruit and vegetable vendor. “I’m paying the black market, but I have no other option, you know?”

The city also set up a special Green Cart program for 1,000 mobile fruit and vegetable vendors in 2008, and while those have been shown to provide more access to fresh produce in under-resourced neighborhoods, there are no additional permits available, and the waitlist is not currently open for those either.

While the Street Vendor Project’s Lift the Caps Campaign is focused on New York, restrictions on street vending are a contentious issue in several cities across the country, says Dick Carpenter, the director of strategic research at the Institute for Justice, a non-profit public interest law firm that focuses on representing individuals whose rights have been violated by government.

Carpenter recently published a report called “Upwardly Mobile: Street Vending and the American Dream,” which compiled survey data and case studies to answer questions about who street vendors are and the nature and economics of their businesses.

“Often, policies were being made about vending—that affected vendors—based on no research,” said Carpenter. The survey also points to the fact that some public perceptions of vending were based on myths. “People didn’t see vending as a viable business model that made contributions to the city. Instead people saw it almost as parasitic.”

But, counter to those assumptions, he adds, “we found that vendors are a very vital, dynamic sector of the economy.” In 2012, street vending in New York City contributed an estimated 17,960 jobs, $192.3 million in wages, and $71.2 million in taxes.

Across the country, around 96 percent of the diverse vendors surveyed owned their own business. Carpenter also found that street vending can provide a path to entrepreneurship for those with minimal access to capital and little advanced education.

Sean Basinski pointed to another aspect of the issue when he spoke at an annual conference in March organized by Just Food, an organization that works to increase access to healthy, local food, especially in underserved neighborhoods.

Basinski urged local food advocates to consider street vendor permits an issue of food justice, even if the food being sold doesn’t always fit into the organic, sustainable framework they often support. Street vending “increases access to affordable food,” he said, and is sold by a diverse community of primarily low-income, immigrant workers who in turn can feed their families. “It’s about examining our whole food system to ensure that the benefits and risks of that system are shared equitably,” he said.

To that point, Mehedi Masud, another vendor who attended the rally, had a lot to say about how much permit owners are making on the black market while he is out offering up fruit and vegetables to Manhattan buyers. “We are working in the street, whatever the weather—but we don’t have permit[s]. We are the real vendor. We are working hard, but we can’t make money,” he said. “At the end of the day, we have nothing.”

The city did not respond to a request for comment.