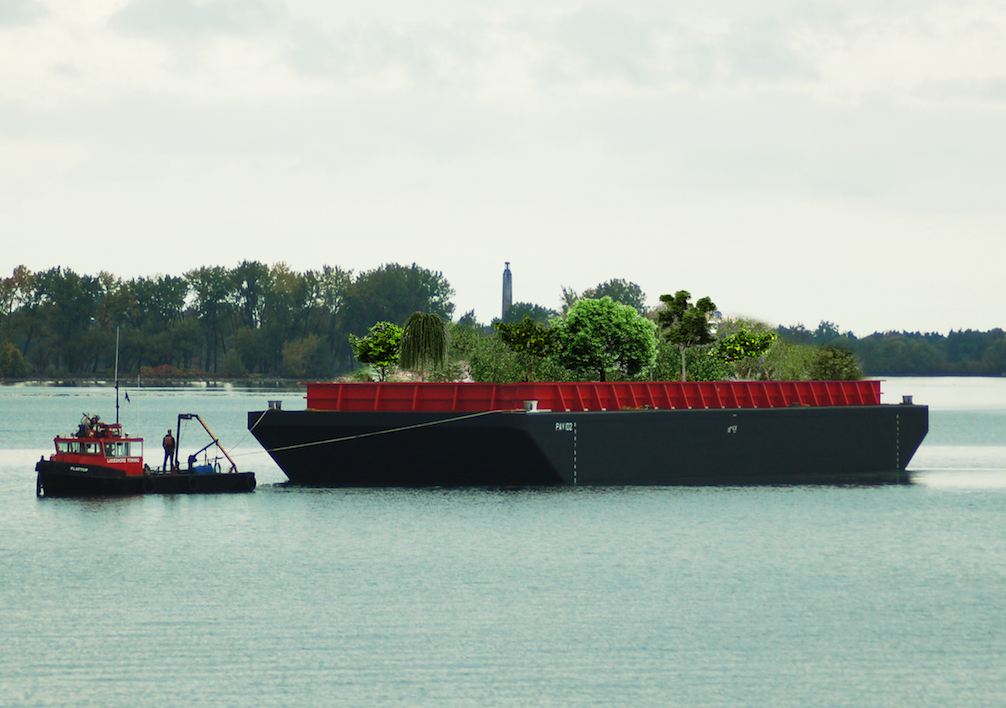 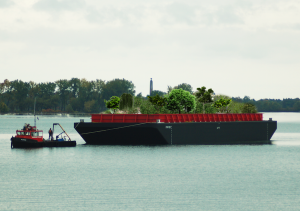 Half public art project, half tourist destination, a floating food forest called Swale is set to launch along the New York City waterfront in June.

Unlike the Beacon Food Forest in Seattle, Clifton Park Food Forest in Baltimore, and other similar efforts located in public parks or public land, Swale is built on a barge. Occupying the equivalent of one tenth of an acre, the barge will be planted with mature persimmon and paw-paw trees, gooseberries, autumn olives, chives, artichokes, Swiss chard, tomatoes, and dozens of other varieties of fruits, vegetables, herbs, and nuts that visitors are invited to harvest and eat, free of charge. Swale will dock at six ports along the Hudson River, including Governors Island, Yankee Pier, and Brooklyn Bridge Park, spending at least one month in each.

“On land, we would have been more localized, working in one area with one community,” explains Swale founder Mary Mattingly. “Because we can travel, we can reach a lot more people and generate a lot more excitement.”

To date, the nonprofit behind the project has raised $32,000—about half of the funding it needs—through individual donations and grants from nonprofit foundations and launched a Kickstarter campaign to raise the remaining funds.

Dozens of farming, gardening, urban revitalization, and arts organizations are collaborating to get the 100 by 30 foot barge on the water, including the New York Foundation for the Arts (the project’s fiscal sponsor), the Bronx Museum of the Arts, the Experimental Farm Network, the Land Institute, and Stuyvesant High School.

Sean Walsh, owner of the New Jersey-based edible landscape company AppleSeed Permaculture, is one of the collaborators assisting with design and plant sourcing. He hopes Swale can help more people think about growing food in underutilized spaces under unpredictable circumstances.

“We’ve adopted specific methodologies for growing food in modern culture but with the threat of rising sea levels and climate change, we’ll be dealing with more issues of agriculture adaptability,” Walsh explains. “We have a lot to learn about how food production can regenerate the landscape; this kind of experimental education will help.”

Mattingly—an artist who has built a number of ecosystems and mobile environments, including the other floating art Waterpod and WetLand—admits there will be challenges to growing food on a barge. For starters, salt spray could damage the plants and saltwater must be purified before it can be used for irrigation. But the forest’s design will create a saltwater marsh around the edge of the barge and then that will help clean and desalinate water from the Hudson River that will go on to irrigate the other crops. Salt-tolerant plants like tomatoes and artichokes will them go inside the initial perimeter.

If all goes as planned, Mattingly says Swale could produce up to 6,000 pounds of food in its first year—a harvest comparable to traditional food forests of similar size.

“We want to turn what could be challenges into positives,” she says. And that approach extends beyond the growing conditions. 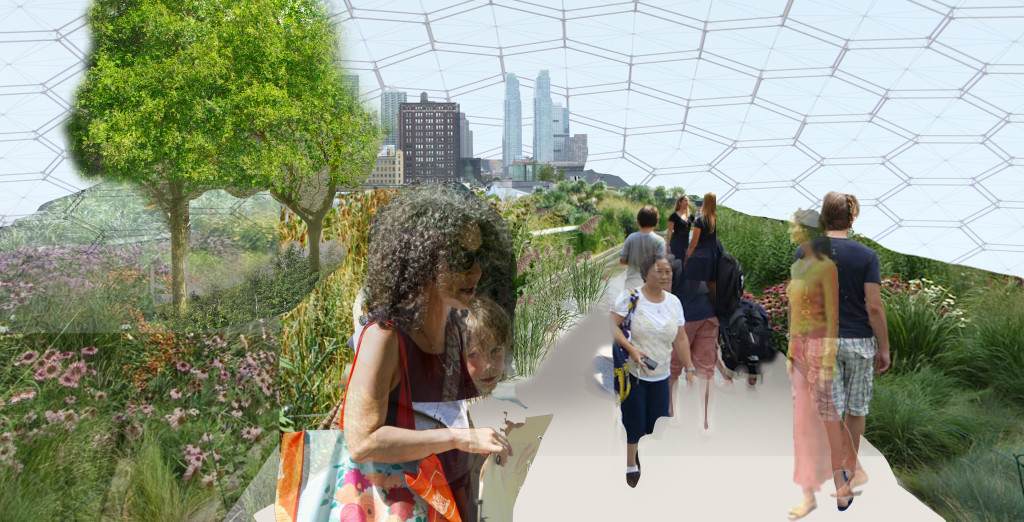 When the barge docks in each port, Swale organizers hope to partner with community groups like Dewitt Clinton High School in the Bronx and the library, farmers’ market, and parks department in New Rochelle to work on establishing permanent food forests on public lands—which is currently prohibited in New York.

Because the rules for foraging on public lands do not extend to the water, Swale hopes to encourage visitors to pick and eat the foods growing on the barge, giving the uninitiated a true taste of the benefits of food forests during guided tours and onboard workshops.

“The critics are skeptical that laws will change and believe that we’re doing this too soon,” says Mattingly. But she thinks the time is right to start focusing on changing policy.

“There are a lot of old laws on the books that restrict growing public food in public spaces,” she adds. “We want to create support to change policies and have public food incorporated into the urban plan.”

At its core, the floating food forest is more than an agricultural experiment—it’s a political statement. Between mouthfuls of berries and bites of paw paws, Mattingly hopes the edible landscape will help New Yorkers rethink public food access.

Walsh agrees. “Swale will help elevate conversations and get people thinking about how we can approach problems in our food system from a vastly different perspective than we did in the past,” he says.