New study shows that consumption of fast food is linked to higher levels of phthalates, the chemicals used to produce many plastics. 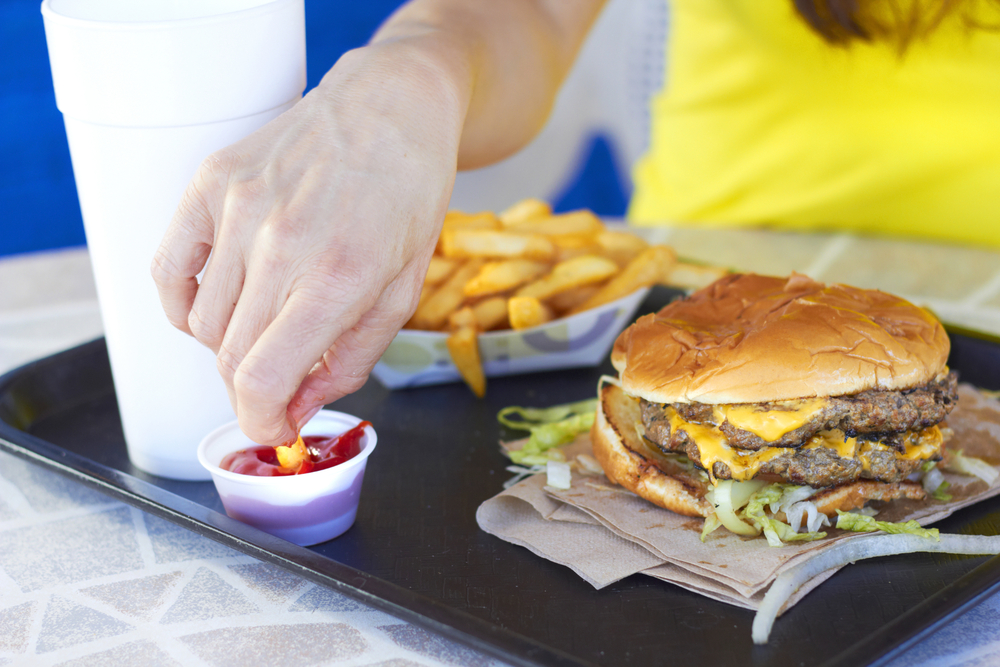 Most busy Americans have a powerful push-pull relationship with fast food. While they may know the facts—most fast food is high in fat, salt, and sugar and can lead to increased risk of diabetes, heart disease, and obesity—they still eat a lot of it. According to a 2013 Gallup poll, eight in 10 Americans report eating at fast food restaurants at least monthly, with almost half said they eat it at least weekly.

Now, a new study may add fuel to the anti-fast food fire. It suggests that people who eat fast food regularly are being exposed to significantly higher levels of hormone-disrupting chemicals called phthalates. These findings raise concerns because phthalates have been linked to a range of adverse effects including impacts on reproductive, behavioral, and respiratory health.

Published today in Environmental Health Perspectives, the study, conducted by researchers at George Washington University, looked at fast food consumption by nearly 9,000 people and found that those who reported eating more of it in the past day had urinary phthalate levels as much as 40 percent higher than those who had eaten no fast food in the 24 hours before testing.

“This is the largest study of its kind to examine if a certain type of food preparation is associated with levels of these chemicals in the body,” the study’s lead author Ami Zota, assistant professor of environmental and occupational health at George Washington University, told Civil Eats.

The study asked about 8,900 people participating in the Centers for Disease Control and Prevention’s (CDC) National Health and Nutrition Examination Survey between 2003 and 2010 what they had eaten in 24 hours before having their urine tested for the breakdown products of two phthalates: di(2-ethylhexyl) phthalate (DEHP) and diisononyl phthalate (DiNP).

The researchers also calculated how much fast food-related fat people had consumed and recorded what type of food people had eaten: meat, dairy, grain, eggs, etc. The results showed clearly that people with the highest fast food consumption had 23.8 percent higher levels of metabolized DEHP in their urine and 39 percent higher levels of metabolized DiNP.

Higher fat, meat, and grain consumption was also linked with higher phthalate levels but over all, the results “suggest a bigger relationship between phthalates and the fast food,” Zota explained. The findings connecting phthalate exposure with food are supported by many previous studies that have examined phthalate levels in different types of food.

Phthalates are used extensively in plastics, including food packaging and processing equipment, medical equipment, flooring, toys, and countless other consumer products. They’ve also been used as preservatives in synthetic fragrances and in personal care products and cosmetics, including lotions, nail polishes, shampoos, deodorant, and baby wipes to name but a few. Phthalates can migrate out of all these products and can be inhaled, absorbed through skin, and ingested. Phthalates are so widely used that scientists consider them “ubiquitous” and the CDC has found them in the bodies of well over 90 percent of Americans tested.

In animal studies certain phthalates have been shown to interfere with the male reproductive system. Many studies have linked phthalate exposure to adverse reproductive, respiratory, and neurobehavioral health effects in children and to increased risk for metabolic disease. Based on concerns among medical and public health professionals, a number of phthalates are now barred from use in children’s products by the U.S. Consumer Product Safety Commission. While different phthalates can produce different health effects, the two phthalates tracked in this study are considered endocrine disrupters and associated with these effects.

As Zota explains, the study defined fast food as the CDC does, including not only the big chains like McDonald’s, Burger King, and Wendy’s, but also at other restaurants without table service and grab-and-go food like prepared sandwiches or pastries at Starbucks, or slices of pizza, burritos, and noodles. The exposures appeared to apply equally to McDonald’s and Burger King and to higher-end fare at Starbucks and “casual dining” restaurants, she said.

Also notable, says Zota, is the diversity of the participants, who ranged in age from six to 80 and included a full range of socio-economic, racial, and ethnic groups. Age was the only of these factors that made a difference—the exposures were highest in teens and adults and lowest in children—likely reflecting patterns of eating, Zota and colleagues noted.

Where are the Phthalates Coming From?

While the study did not investigate the initial sources of phthalates measured, previous research suggests that these chemicals are associated with food packaging, preparation, storage, processing equipment—including dairy tubing—and even the vinyl gloves some food industry workers wear, Zota explains. “There’s a myriad of sources,” she says. “It’s most likely the more processed the food the more opportunities [for phthalate exposure.]”

How important are these exposures? “No studies in humans have found a safe level of phthalate exposure,” says New York University School of Medicine associate professor of pediatrics and environmental medicine Leo Trasande, who did not participate in this study but has researched phthalates in food. “We know there are effects of low level exposure,” he says. For example, the levels found in this new study are comparable to those previously linked to blood pressure increases and metabolic effects in children.

The chemical industry has refuted such findings and maintains that phthalates are safe, and do not easily migrate from products. According to the American Chemistry Council—whose members include BASF, Bayer, Dow, DuPont, and over 100 other chemical companies—the presence of phthalates in people does not indicate health concerns.

Many scientists and clinicians are increasingly recommending limiting exposure to hormone-disrupting chemicals like phthalates, especially among vulnerable populations, such as pregnant women, young children, and those going through puberty, among others, explains Zota. And given that a great many people regularly eat the kind of quick meals this study focuses on—about one third of the study’s participants—the evidence may point to one more reason to eat less fast food.

“It speaks to the general concern we’ve long had about food regulations and permissible amounts of chemicals as food additives,” both those added intentionally and those than can creep in from food contact materials, says Trasande. It also “adds further evidence for eating fresh food and avoided pre-processed and packaged food.”