The farmer-food system thought leader is gathering a group of thinkers for a summit on the invisible costs of an industrial food system. 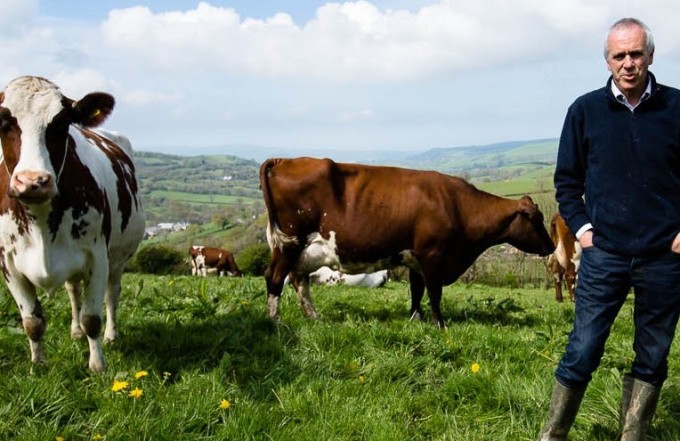 Patrick Holden has been talking about the “true cost” of food for years. And while he has engaged activists, scientists, and academics from all over the world in his role as director of the UK-based Sustainable Food Trust (SFT), it is by no means a theoretical discussion for him.

Holden has also been a farmer since 1973, and his family raises dairy cows as part of a small and diverse organic farm in Wales. But, like many dairy farmers around the world, he can’t afford to sell his cows’ milk.

“To survive economically, dairy farmers have more and more cows, kept more and more intensively,” says Holden. “And still the milk is sold in a supermarket for a lower price than bottled water, and for less than production.”

Holden’s farm makes its own cheese with the milk and sells it in small batches by telling the story of his family’s sustainable practices. But the type of milk they produce, with the care and stewardship practices they use, couldn’t compete in today’s market because conventionally produced milk is so cheap.

But, Holden says, “cheapness is an illusion.” In fact, consumers, tax-payers, and governments pay many added costs without realizing it. As he sees it, milk can be a very nutritious food—when produced from cows which are raised on pasture and treated humanely. But now, he says, it has become “a loss leading commodity from intensive farm systems.”

And milk is just one example. Industrial food production, says Holden, “has impacts on the environment (on the climate, water, soil and biodiversity, and from pollution from fertilizers and pesticides); society and communities (such as wages lower than the living wage, and the poverty trap from which farmers can not escape); and human health (including untreatable infectious diseases due to antibiotic resistance, the rise in diabetes, cancer, allergies, and other health problems). Many of these impacts are costly and unaffordable, yet this huge range of costs is not being recognized by politicians, nor properly addressed by the people who should be addressing them.”

Many people living in the industrialized world spend less than 10 percent of their disposable income on food. In the U.S., that number is around 9 percent, which is just over half what it was in 1960. While this drop is generally seen a good thing, Holden is one of a growing number of people who see cheap food as a mixed blessing at best. He is currently working with the United Nation’s Food and Agriculture Organization (FAO) on a project that traces the true costs of food.

“Behind the price tag lies a series of hidden costs, to the environment, the depletion of the earth’s resources, and to public health—none of which are reflected in the price of food,” he says. For example, the McKinsey Global Institute estimates that obesity and diet-related illness cost as much as $2 trillion in global healthcare costs. In the U.S., the hidden cost of nitrogen pollution caused by agricultural uses is estimates at $157 billion.

Holden and SFT have hosted several gatherings, including two held in Kentucky and London in 2013 (Dan Imhoff covered them for Civil Eats here), dedicated to bringing scientists, policy makers, healthcare and food industry professionals, and members of the press together to discuss these actual, often-hidden costs, using a system called “true cost accounting.”

Now, Holden is bringing the topic back to the U.S. with a larger conference that is open to the public called the True Cost of American Food on April 14-17 at Fort Mason in San Francisco, California. Speakers such as Tyler Norris, Kathleen Merrigan, Saru Jayaraman, Anna Lappé, Water Robb, Joann Lo, Joel Salatin, Urvashi Rangan, and Eric Schlosser will discuss the reasons why food from the most damaging production systems appears cheap, when its real cost to the environment and public health is very high.

The speakers will also explore the range of policy and economic interventions which could collectively ensure that future food pricing more honestly reflects the true cost of production. Most of the talks will also be streamed live online. Stay tuned for more about the true cost of food in the coming weeks. And sign up for our weekly newsletter to find out how to get a discount on the entry fee.