Want to Start a New American Farmstead? There’s a School for That.

Launching this summer, the Sterling College program will bring a star-studded group of experts to Vermont to focus on both the craft and the business of artisan food and agriculture. 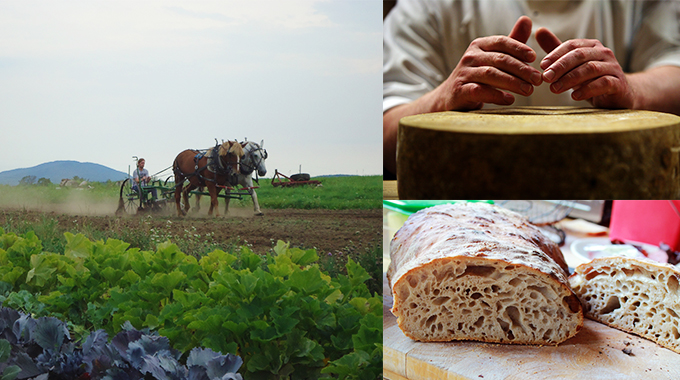 Jes Scribner studied graphic design after high school, but couldn’t see herself pitching designs to businesses all day. After dropping out to work on a goat farm in Rhode Island, she realized that she wanted to start her own farm.

“I want to be my own boss,” says Scribner. She’s aware that she could have chosen a more lucrative degree, and she promises that the risks of farming aren’t lost on her. “The initial investment of farming scares me the most,” she says. “But it’s better than investing in the stock market.”

The new program, set to launch in the mountains of Vermont this summer, is designed to help students not only deepen their focus on artisan food and organic agriculture, but also turn them into viable businesses. While other programs focus on farming, like U.C. Santa Cruz’s intensive 6-month apprenticeship, or train aspiring entrepreneurs, like Oakland, California’s Food Craft Institute, the School of the New American Farmstead at Sterling College will be one of the first to offer both.

“We’ve developed a suite of classes that nurture the landscape and are aligned with the growing season,” says Nicole Civita, assistant director of the Rian Fried Center for Sustainable Agriculture & Food Systems at Sterling. “The cabbage used in our fermentation classes is grown on our farm, just like the pork for the charcuterie classes is raised here, too.”

Since it was founded in 1958, Sterling College has been a hub for sustainability education. It has long offered bachelor degree programs in farming and food systems. But the goal is to appeal to students who aren’t looking for a four-year degree. Students can instead take just one class or several, ranging from a summer-long practicum in sustainable agriculture to two-day single subject workshops. Students who finish six or more food-focused courses take home a Value-Added Sustainable Food Certificate.

For some people, taking a class in bread-baking or mushroom foraging may sound like a grown-up version of Little House on the Prairie. Civita admits that Sterling has more than once been called “old-fashioned.” But she says that the Farmstead program isn’t trying to harken back to a romantic past. It was designed around topics that are essential for any food enterprise to be both financially viable and environmentally sustainable.

“Our mission, though, is to take the best of the skills people have refined over countless generations and figure out how to adapt them to the future,” she says. The key is to find the right mix of appropriately-sized technologies, whether old school (draft horses) or new (solar-powered tractors), to help farmers remain “comfortably small” at 4 or 20 acres.

“I expect that a lot of students will already be two or three years into a business and looking to fine-tune their business plans with industry pros like Katz,” says Rick Thomas, Sterling’s Draft Horse Manager and a teacher in the sustainable agriculture program. He hopes that the program will eventually include a full suite of classes in the “rural arts,” like blacksmithing, timber-framing, and green woodworking. “They’re skills that every Vermont farmer around here would have had a hundred years ago.”

Finding instructors for the course was no small feat. People who are “embedded in the working landscape,” like farmers or foragers, can’t easily get away during the summer season to teach a two-week class. And while the classes are purposefully geared to match the cycles of the farm, coordinating an academic schedule around harvest times and livestock births is challenging—like the course work itself.

Sterling ag students are often surprised at how much of their work is outdoors, says Thomas. It’s not unusual for students to decide they aren’t as dedicated to planting vegetables as they thought. But curing students of their idealism is part of the point.

“We make them do the work. It’s not just about, ‘Wouldn’t it be nice to farm or start a cheese business?’ We make them get into the stables and the creamery at 4 or 5 AM,” says Civita. That level of authenticity isn’t for everyone, but Thomas insists that it’s important to hold students to the same standards they would face on any farm. And if at first they don’t succeed, that’s okay. Perfection isn’t the point. “There are great lessons in the most intense foul-up,” he says.