Is Rural North Carolina the Next Flint? | Civil Eats

Is Rural North Carolina the Next Flint? Groups Say People of Color There Bear the Brunt of Hog Farm Pollution

Advocates say that many of the poor residents living near CAFOs in the state haven't been protected by the law. 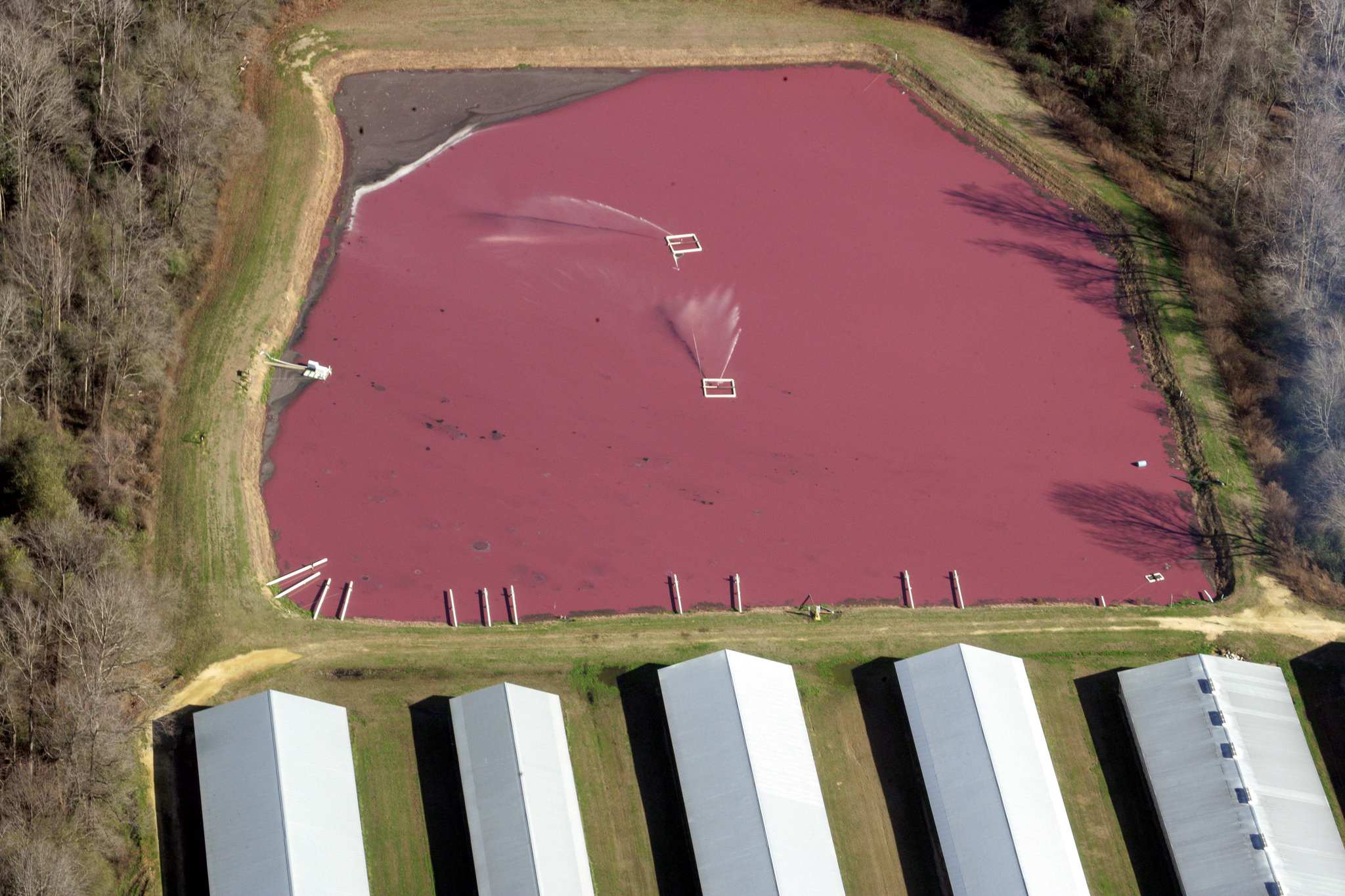 All eyes have been on the water crisis in Flint, Michigan, but it is by no means the only city where the poorest residents face environmental damage and lax government oversight.

Further to the South, in rural North Carolina, another, less-known battle is taking shape. This crisis involves the lasting impact of pollution from large concentrated animal feeding operations (CAFOs) housing pigs. Now a group of citizens is claiming that the state’s $3 billion pork industry is disposing of its waste in a manner that disproportionately and negatively affects residents of color, and that the negotiating efforts are being stalled by the pork industry.

In 2014, the University of North Carolina’s Center for Civil Rights and the nonprofit law firm Earthjustice filed a complaint with the state’s Environmental Protection Agency’s Office of Civil Rights under Title VI of the Civil Rights Act, which requires that recipients of federal funds ensure their actions don’t harm individuals or communities based on race. Since then, the community groups have been negotiating with state regulators, but the process broke down earlier this month, when those regulators brought pork industry representatives to a mediation session which was supposed to be confidential.

Last fall, Ann Edmondson, a spokeswoman for the N.C. Pork Council, told North Carolina Health News that it doesn’t see its operations as endangering the health of nearby residents.

“More than 80 percent of North Carolina’s hog farms are owned and operated by individual farm families, almost all of whom live in close proximity to their swine or in communities where their swine operations are located,” she said, “It strains credibility to believe our hog farmers are risking the health of their own families, along with their neighbors’ health, in order to make a living.”

We spoke with Elizabeth Haddix, attorney at the Center for Civil Rights, to hear more about her take on the process.

Can you describe the hog farms in the area where your clients live?

In the late 80s and early 90s, these CAFOs began to come into existence. The pork industry was very quickly monopolized by Smithfield, which bought up a lot of farms that were historically owned by Black farmers—which is part of the irony here, because of the disproportionate impact on the Black community. A lot of Black farmers lost their land at that time to these industrial operations. What they do is contract with local farmers, and everything is owned by the integrator, Smithfield, which is now owned by the Chinese corporation, WH Group.

The contractors have no control over what feed, antibiotics, etc. are given to speed up production, but they do own the waste from the hogs. And one hog creates a lot of waste—up to three times what a human creates.

The hog waste disposal system was instituted as this antiquated “lagoon” and “spray field” [approach]. The hogs are kept in cement houses on slatted floors, and the waste goes down through the slats and into a tank, and it gets pumped out into an open pit. All of these open pits were unlined. Supposedly, the solids and liquids separate naturally, and the waste is then pumped through these sprayers and sprayed onto nearby agricultural fields. All of this is supposed to be regulated by North Carolina Department of Environment and Natural Resources (DEQ).

There’s a moratorium on the lagoons [as of 2007]—you can’t build any more—but for the ones that are in operation now, there aren’t any incentives to stop using this form of waste disposal.

What do you see as the fallout from this particular type of disposal system? Who is being impacted?

Black, Latino, and Native American people are disproportionately impacted, because they live in these areas where the hog operations are. The impacts are everything from the stench of the operation to the water impacts, to having your house, your clothes, your car, everything sprayed with this waste. In Eastern North Carolina the water tables are really high; there are rivers, creeks, and ditches throughout the fields. All of the waste runs off and into these ditches. The pork industry has said that the Black River, which runs through Sampson County, is pristine, but it’s not. Our client, the Water Keeper Alliance, has done testing on that river.

Can you share any anecdotes from people who have been impacted?

Renee Miller lives in Warsaw, North Carolina. She grew up there, in the house that was her mother’s. She moved away for a better job, and then came back to take care of her aging parent. She lives close to the road that divides her property from some of these spray fields. Behind her is a trailer park that has a lot of working class, low-income people living in it.

The contract grower [for WH Group] puts his jet-powered sprayer less than 50 feet away from where Miller lives and lets it spray waste all over her house and car. She doesn’t hang her laundry out to dry anymore because it ruins her clothes.

She used to spend a lot of time outdoors and have family picnics there, but she doesn’t do that anymore because it’s so unbearable to be outside—especially in the summertime when it’s hot, because of the stench from the spray fields and lagoons.

Miller has called and complained, asked for help. She’s on the board of Rural Empowerment Association for Community Help (REACH) [a group which has worked to help rural residents in the area respond to CAFO waste]. So she has a target on her back, and often feels retaliated against by the contract grower there, who’s also related to the former Sherriff of Duplin County.

Another gentleman who has given a declaration in this case used to fish in the creek behind his house with his son. He grew up there fishing on that same tributary, and he can’t anymore. The fish have open sores on them from listeria, which is a disease caused by super-saturation of these nutrients from hog waste. They used to have fish frys out there—part of traditional Black culture. The churches do them as fundraisers, it’s traditional to catch a bunch of fish, fry them up outside, have a big table, and your whole family comes. He hasn’t done that in over a decade.

How has the Pork Council responded to these complaints?

We filed this complaint back in September 2014, and the Office of Civil Rights and the U.S. EPA set the jurisdiction in 2015, and we agreed to go into alternative dispute resolution. We get set up to have our first mediation session in January, and in December we get a “motion to intervene” from the National Pork Council and the North Carolina Pork Council.

They sent it to EPA saying that they wanted to be involved in the mediation, which was a surprise to us because we had been instructed by EPA that the very fact that we were in settlement negotiations should remain confidential. This is a community that has suffered a lot of retaliation and intimidation from the pork industry. Relationships with their neighbors who are contract growers have been disrupted. And so, here comes the Pork Council who has never agreed to come sit down at the table and listen to these community members’ concerns, and all of a sudden they’re telling EPA that they want to sit down at the table during this mediation process.

On behalf of our clients, who were adamant that the Pork Council should not be at the table—this was not about them, it was about DEQ’s responsibility to protect the environment and health and safety of the people of North Carolina—we said no, there’s no place for you here.

But they showed up at the Center for Civil Rights offices on the morning of the mediation session. DEQ attorneys made it very clear that they wanted the Pork Council there, and that sent a very clear message to our clients: DEQ is less interested in protecting the health and safety of the communities that disproportionately bear the burden of these facilities than they are in the concerns of the Pork Council.

Last year North Carolina passed a bill (seen by some as an “ag-gag law”) that will make it illegal for employees to document what happens on farms. How do you think this law relates to the work that your clients are doing?

The political climate in North Carolina right now is certainly advantageous for the pork industry.

We have some of our clients from REACH—people who live on these streams—going out to do water testing and getting threats from the industry. [One activist] at REACH called in a complaint about jet-powered sprayers operating during rain, which they’re not supposed to do. Less than 24 hours later, he received an anonymous phone call saying, “Did you just call in to complain? Who is this?” [The activist] said, “Well, who is this? You’re calling me.” Apparently the guy had gotten the phone number from DEQ.

What are your hopes for a resolution?

We’re hopeful EPA will intervene and do a real investigation. Our clients want to see the spray field system ended permanently.

DEQ has permitted more than 2,000 swine operations in North Carolina. That’s more than 9.5 million swine in confinement in these operations. Most of them are in the eastern portion of the state, which also happens to be the most dense population of African Americans and Native Americans in North Carolina. That capacity needs to be scrutinized, and the disproportionate burdens on communities of color need to be recognized and abated. The only way to do that is to deal with the waste situation and the concentration of these animals through the permitting process.

There are interim changes that could be made, though. They don’t have enough inspectors—16 for the whole state. So the inspections are not adequate to protect the environment nor the people who live around these places.

This interview was condensed for length and clarity. Photo courtesy of Waterkeeper Alliance.