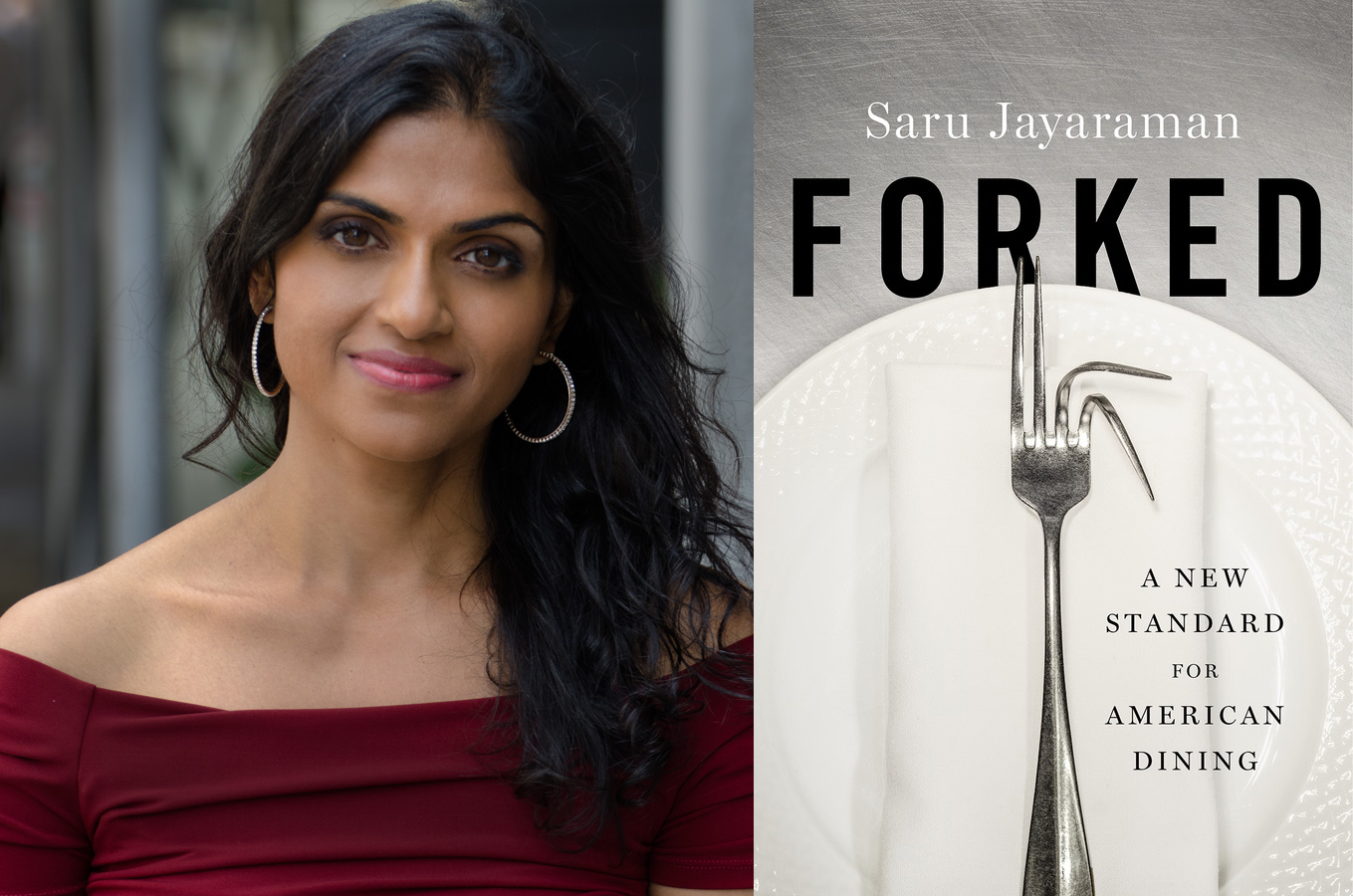 Before I became a journalist, I worked for years in food service. None of the jobs I had paid particularly well. At one coffee shop in a gentrified San Diego neighborhood, I realized I had a better chance of being struck by lightning then getting a raise or benefits so I got fed up and took my complaints to the owners, but they fell on deaf ears. I quit soon after in search of more lucrative work.

I was lucky. Many of the six million people working in the lowest-paying sector of the American economy—the restaurant industry—aren’t in a position to search for something better. In her new book, Forked: A New Standard for American Dining, Saru Jayaraman, cofounder of Restaurant Opportunities Centers (ROC) United and director of the Food Labor Research Center at University of California, Berkeley, shares no shortage of case studies about people trying to survive on meager wages in food service jobs with little or no mobility.

There’s April, a young, single mom from southwest Michigan, who works as a server at the Olive Garden. She tells Jayaraman that she has been sexually harassed by coworkers and customers and she has watched fellow employees without sick leave work through fevers, sneezing fits, and asthma attacks. April’s hourly pay is so low that she depends almost completely on tips. Without a guaranteed paycheck, she has been forced to move back in with her mother.

Or take the story of Sandy, a former Subway employee who never made more than $9 an hour, despite 16 years with the company and a managerial promotion. “Without child support from my ex-husband, I would have had to go on food stamps,” she says.

And these women are not alone. Eighty-six percent of food industry workers are earning either subminimum, poverty, or low wages. And 14 percent depend on public assistance to make ends meet. This dismal statistic would be a serious issue on its own, but as it stands, the restaurant industry is one of the fastest growing employment sectors. In a recession or an economic boom, Americans love going out to eat. Which begs the question: Why aren’t the workers who serve and prepare that food compensated accordingly?

Jayaraman is intimately familiar with bleak reality that April and Sandy share with so many other servers across the U.S. She’s a driving voice in the Fight for $15 campaign and the struggle against the lower, federal tipped minimum wage—frozen at $2.13 for two decades. In 2015, she came out publicly against tipping.

In the introduction, Jayaraman describes Forked as a “guide for anyone who eats out and anyone who wants to eat better and more ethically.” To that effect, Forked is divided into user-friendly chapters by restaurant type: family-style and casual, Mexican food, fine-dining, burger joints, sandwich shops, coffee shops, and diners. Each chapter dives into the history, origin, and current treatment of workers at one “low-road” restaurant (i.e., a business treating workers poorly) and one “high-road” restaurant (one treating them fairly).

The “high-road,” employers Jayaraman mentions include Chipotle, In-N-Out Burger, Tom Colicchio’s Craft restaurants, and Busboys and Poets. According to ROC research, these businesses pay a living wage, offer benefits and paid sick days, and provide opportunities for “internal mobility regardless of workers’ race or gender.”

Jayaraman calls out Darden Restaurants—the parent company of Olive Garden and the Capital Grille—in particular for low wages, policies that often result in sick employees showing up to work, and lax enforcement of sexual harassment policies.

Early on in Forked, Jayaraman takes a shallow dive into the history of tipping. Interestingly, after wealthy Americans brought the custom of tipping back from Europe, a strong anti-tipping movement railed against the practice, calling it “despicable” and “undemocratic.” But, the practice caught on, especially when American hospitality and railway companies fought in favor of tipping on the premise that they shouldn’t have to pay wages to their employees—many of which were former African-American slaves—because the workers were earning tips.

“The impetus for these industries to be able to hire workers and not pay them at all, arose in part from the nation’s history of subjugation based on race,” writes Jayaraman. Eventually, despite the fact that other countries moved away from tipping, it became entrenched by custom, law, and federal policy here in the U.S.

Jayaraman places the blame squarely on the shoulders of the National Restaurant Association (NRA), the federal lobbying group for the restaurant industry. Or the “other NRA,” as ROC puts it. The group has lobbied to “keep the minimum wage as low as possible,” she writes. In fact, congressional legislation passed in 1996, thanks to negotiation tactics by former NRA president and once-presidential candidate Herman Cain, froze the federal minimum wage for tipped workers at $2.13 an hour. It hasn’t increased since.

“When you are a tipped worker who receives between $2.13 and $5 an hour … your wage is so small it goes entirely to taxes, and you get a paystub with $0 that says, ‘This is not a paycheck,’” writes Jayaraman. “As a result, a vast majority of tipped workers in America live completely off their tips, which creates extraordinary economic instability. It’s a system, she says, that demands tax payers to subsidize low-road restaurants in two ways: by paying workers’ wages through tips, and by paying for those same workers’ economic survival through the Supplemental Nutrition Assistance Program (SNAP) and Medicare.

A handful of states have bucked the trend and passed their own legislation raising, or in some instances, doing away with the tipped minimum wage. For decades, California, Oregon, Washington, Montana, Alaska, Nevada, and Minnesota, have had the same wages for tipped and non-tipped workers. Still, the restaurant service industry stands as the lowest-paying employer in the U.S. Not surprisingly, a dependence on tips has left employees, especially women, vulnerable to unwelcome advances from customers. Jayaraman recounts the many instances when women approached her after a book talk to tell their own stories of sexual harassment and assault while working as servers in restaurants.

Consumer power, Jayaraman argues in the book’s conclusion, is the best way to ensure higher wages, benefits and mobility for restaurant workers in the United States. To make it easier for diner’s to decide where to spend their money, ROC developed the Diners Guide to Ethical Eating app. The app rates the 100 most popular restaurant chains and points customers towards a few dozen “responsible restaurant employer partners.”

Unfortunately, the choices for “high-road” restaurants—aside from those with a larger presence like In-N-Out Burger and several of ROC’s own worker-owned restaurants—are pretty limited. That could change if more consumers start using the app. It also isn’t clear what customers should do if they are searching for high-road restaurants in their own towns. It’s one thing to suggest that we ask employees at our favorite restaurants, how they are treated, but it’s another to put that into action without feeling somewhat awkward. Still, it’s a start. In addition to using the app to find “high-road” restaurants to support, Jayaraman urges consumers to lobby their elected officials to end the two-tier wage system, to talk with restaurateurs about their values, and to hold low-road employers accountable through calls and emails.

“What’s hidden in plain sight as we talk and talk about food is the glaring mistreatment of people whose work makes restaurants such an integral part of the U.S. culture and economy,” writes Jayaraman. “Fair pay for the people who prepare and serve us our meals is the final frontier for the food service industry—and for a society that loves eating out.”