The Fair Food Agreement has changed the way 90 percent of the tomato farms in Florida treat their workers. But, for now, Wendy’s has stopped sourcing from there. 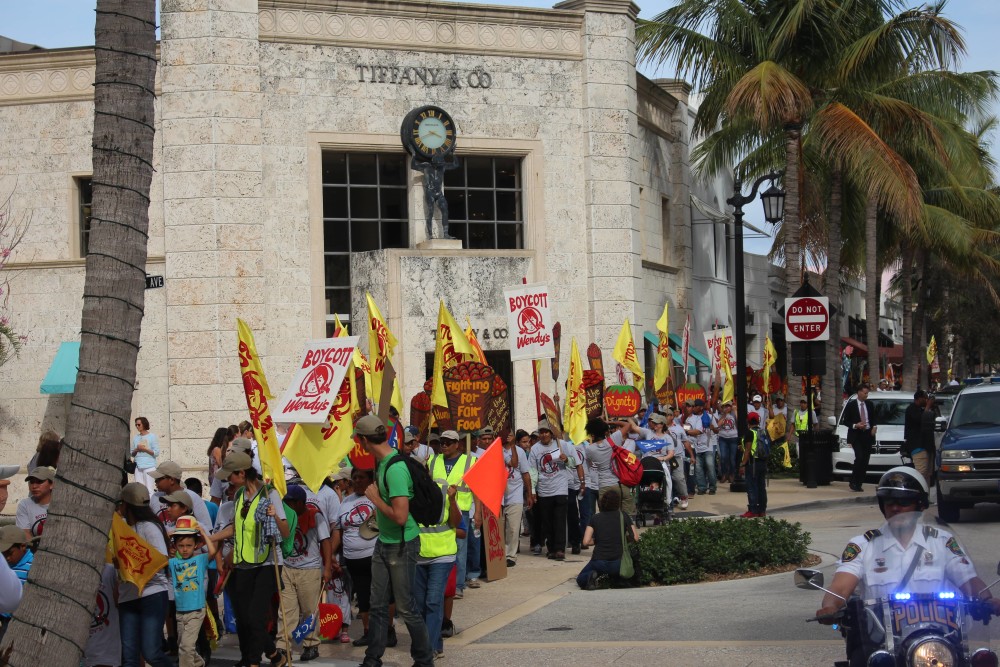 The Coalition of Immokalee Workers (CIW) has Wendy’s—the world’s third largest hamburger chain—in its crosshairs. The group is officially calling for a boycott, and they kicked off the effort with a 10-day Workers’ Voice tour earlier this month.

This is only the second official boycott undertaken by CIW, whose Fair Food Program has made major strides towards corporate social responsibility in the tomato fields of South Florida. The first boycott was against Taco Bell 15 years ago and rang solidly through public consciousness.

Since then, 14 major corporations (Wal-Mart, McDonald’s, Whole Foods, and Chipotle among them) have signed on to the Fair Food program, and as a result 90 percent of tomato farms in South Florida now participate. The Program’s success has led the Coalition to expand into other tomato growing states, such as Georgia, North Carolina, South Carolina, Virginia, and New Jersey.

Wendy’s represents the last major holdout in fast food, and its acquiescence to the group’s demands could make a big impact in corralling the remaining unregulated tomato farms in the state. In lieu of capitulating, however, CIW leaders say that Wendy’s appears to have stopped buying tomatoes in Florida. The group says that Wendy’s is sourcing tomatoes from Mexico, and they see the shift as completely undermining the struggle for food justice here in the states.

Bob Bertini, a spokesperson for the company, confirmed the Mexico connection over email with Civil Eats: “We base our agricultural purchasing decisions based on seasonality, quality, varietal needs, and other factors. Currently we are purchasing tomatoes from Mexico and other locations. However, when we do purchase tomatoes from Florida, we only work with suppliers who themselves are signatories to the Fair Food Agreement.”

A Harper’s reporter also confirmed that the Kaliroy Corporation—the U.S. distribution arm of the major Mexican tomato grower, Bioparques de Occidente, and one of the farms covered in last year’s LA Times series on labor in Mexico—is indeed a Wendy’s supplier.

Speaking after a recent rally in the affluent West Palm Beach, Coalition organizer Gerardo Reyes referenced Wendy’s circumvention of the program as a direct affront to human rights: “They have been taking advantage of our community for years and years, and when the community finally created a working solution to the labor abuse in the fields, they go to exploit workers somewhere else.”

Wendy’s Bertini pointed Civil Eats to the company’s in-house code of conduct. “We have always prided ourselves on our relationships with industry-leading suppliers, and we work with companies who share our commitment to quality, integrity, and ethics,” he said.

“The CIW has demanded that we pay an additional fee directly to the tomato harvesters that work for the suppliers with whom we contract,” added Bertini. “These individuals are not Wendy’s employees, and we have not thought it appropriate to pay another company’s workers–just as we do not pay factory workers, truck drivers, or maintenance personnel that work for our other suppliers.”

Reyes says that Wendy’s code of conduct has no teeth. “It doesn’t matter if you have the most beautiful set of rules or code of conduct” he said. “If you don’t have the workers protected against retaliation in the workplace, you are not going to receive complaints.” Complaints from workers, Reyes believes, tend to come up when there’s a safe grievance policy in place.

At the rally, the Coalition marched with a group of workers and activists along the gilded pedestrian path of Worth Avenue on Palm Beach (they were legally precluded from marching in the streets). They were joined by Ethel Kennedy, who founded the Robert F. Kennedy Center for Justice and Human Rights in honor of her late husband, a major supporter of Cesar Chavez’s struggle for farmworker rights in the 1960s.

So to say March 12th was something of a “full circle moment” for the struggle for farmworker rights, a battle which has been fought on various fronts over the past five decades, is true in some respects. CIW closed their Workers’ Voice tour the same way they opened in the streets of Midtown Manhattan eight days prior.

The reasons for the boycott were illustrated with theatre procession not unlike those performed five decades ago by El Teatro Campesino, the patchwork theater troupe acting on behalf of the same disenfranchised farm workers for which Chavez campaigned. Although, according to the CIW, workers in Florida have often faced much harsher conditions than the grape pickers of the 1960s, including a number of documented cases of slavery.

Speaking near the assemblage of protesters rallied around of the flatbed, Miguel Estrada, a Presbyterian pastor who works closely with the Coalition, has witnessed conditions improve considerably over the course of his involvement in the Immokalee community. Estrada believes the visibility of the Fair Food Program has been crucial to the improvement.

“For nine years, I have had the opportunity to be in each one of these actions, and I believe the most important part of these tours is the possibility that others will know what is happening,” Estrada said. “Really, the lack of information is what permits these conditions to remain in existence.”

Estrada hails from a tomato growing region of Guatemala, Baja Verapaz, and first began picking tomatoes at age 16. He says that just 10 years ago the working conditions for tomato pickers in Guatemala and the U.S. were essentially the same.

“Today, I would say the differences are enormous,” Estrada said. “The conditions in Guatemala continue as the same, worse even. The conditions here in many ways have improved and are meeting the hopes of the workers.”

Nely Rodriguez worked for 10 years in the tomato fields of Florida after traveling from her home in the Northern Mexico. She says that prior to the Fair Food Program, employees were transported to the ranches in the early morning hours, whereupon they would have often have to wait several hours for plants to dry before they could begin harvesting. It was down time for which the workers were not paid.

“Before the contractor would just records names; they themselves would put the times that the worker would be paid,” Rodriguez said. “But now, no. There is an electronic clock. Every worker has a card and punches it.”

While workers gain extra $40-$60 a week through the Fair Food Program’s penny-per-pound premium, the most crucial feature might be the ability to file effective grievances without fear of retaliation. Julia de la Cruz, who is originally from Southern Mexico and started harvesting tomatoes in Florida 10 years ago, says before the Fair Food Program was prevalent, complaints were often met with swift action aimed at eschewing the problem rather than addressing it.

“[Supervisors] wouldn’t tell you anything. They discharged you easily. If you came to complain, they sent you home. The next day you did not have a job,” said de la Cruz.

Now workers faced with injustice can call a 24-hour complaint hotline managed by the Fair Food Standards Council, a third-party monitoring program and investigative body. Once a worker files a complaint against a participating farm, the Council launches an investigation which includes a corrective action plan.

According to the CIW, since Florida growers began participating in the Fair Food Program four years ago there have been no cases of forced labor at participating growers’ operations. During that time, violence and sexual assault have also been eradicated.

Progress on human rights conditions abroad, however, remains stagnant. The U.S. Department of Labor lists Mexico as one of three countries known to harbor exploitive labor practices in tomato fields.

Nely Rodriguez, who left her home in Matamoros, Mexico in search of opportunity calls the Wendy’s shift away from Florida an act of “simple greed at the expense of impoverished workers.”

“We know that the work in Mexico is very different,” Rodriguez said. “There is no type of worker’s aid or benefits. The wages are also low. It’s like textile factories. Textile factories go to poor countries, to pay a dollar a day to workers. This is more or less what Wendy’s is doing … So Wendy’s washed their hands clean of us to go where the workers don’t have a voice, and thus continues the violence and slavery.”

Jimmy Sherfey is a freelance journalist focused on specialty coffee, global food systems, and the triple bottom line. He proudly resides in the Audubon Park Garden District of Orlando, Florida, a horticulturally diverse, food-conscious neighborhood in a city that is quickly gaining a reputation for smart growth. Read more >