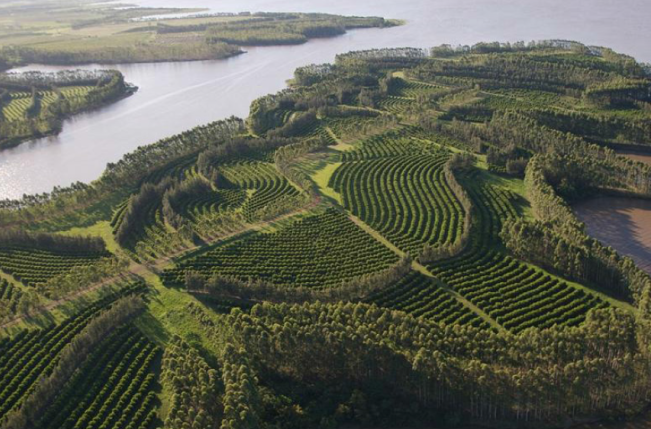 As the climate crisis heats up, agriculture is in the hot seat, not only as a contributor to climate change, but also as a potential solution. Eric Toensmeier has spent the last several years tracking both. A lecturer at Yale University, a senior fellow with Project Drawdown, and the author of several books on permaculture, Toensmeier is also the author of the newly-released book, The Carbon Farming Solution: A Global Toolkit of Perennial Crops and Regenerative Agriculture Practices for Climate Change Mitigation and Food Security.

Toensmeier argues that when combined with immense reduction in fossil fuel emissions and adaptation strategies, carbon farming has the potential to return the carbon dioxide in our atmosphere to the “magic number” of 350 parts per million, while feeding people, building more fertile soils, and contributing to ecosystem health.

We spoke with Toensmeier about his thoughts on agroforestry, what happened at the climate summit in Paris, and what strategies farmers, communities, and governments can take to launch carbon farming projects. This conversation has been edited for brevity.

When did you start working on carbon farming and why?

In 2009, I read the book Now or Never. Author Tim Flannery wrote that we need to mitigate climate change and a good way to do that is planting forests. But we can’t plant enough forests because we need land for agriculture. I thought to myself: there are trees that are agriculture; perhaps I have a contribution to make.

You note that agroforestry and perennial staple crops—strategies with immense potential to sequester carbon—have been given little attention to date. Why is that?

There are good reasons to focus on lower-sequestration strategies like no-till, organic annual cropping, and managed grazing. They don’t require farmers to make big changes to what they do, they don’t require people to change their diets, and they don’t require us to add unfamiliar foods to our food system. For example, an animal raised in a managed grazing system is raised differently than in a conventional system, but the cheese is still more or less the same. Moving into a fully perennial system would require fundamental transformation of our food system, from development to technologies. The notion that agriculture can incorporate trees—let alone the notion that agriculture be based on trees—is still new for most of us. Agroforestry produces only a tiny percentage of our food in the U.S.

What are the challenges of a perennially-focused food system?

A challenge for farmers transitioning to agroforestry is the lag time before they break even financially. The more trees there are, the greater this gap, which typically lasts two to five years. I’d like to see a carbon tax on fossil fuels. The money from this would help farmers over the hump getting established. Some farmers will make the financial risk to transition on their own, but we won’t see implementation on the scale we need without financial assistance programs.

The U.S. Department of Agriculture has actually started a small carbon farming effort. They’ve estimated the amount of carbon sequestered by various practices. Their rates are overly conservative and many of these practices are already funded for soil and water conservation reasons, but they’re actually paying some attention to the role of various agricultural practices in climate change, so that’s great. Unfortunately, they’re not yet permitted to fund these projects for political reasons.

Globally, in 2013, there was $330 billion available for climate mitigation through various United Nations mechanisms. Only two percent went to agriculture. That seems low given that agriculture, including land clearing for agriculture, is responsible for a quarter of emissions.

Your book compiles an impressive amount of research on both agriculture’s deleterious and positive effects on the climate. What was most surprising?

The remarkable scale at which carbon farming is already taking place around the globe, particularly in the tropics. Multistrata agroforestry is practiced on 100 million hectares around the world. Silvopasture is currently practiced on 450 million hectares. Systems of rice intensification, which reduce water use and increase yields, are actually done on a bigger scale globally than organic agriculture. 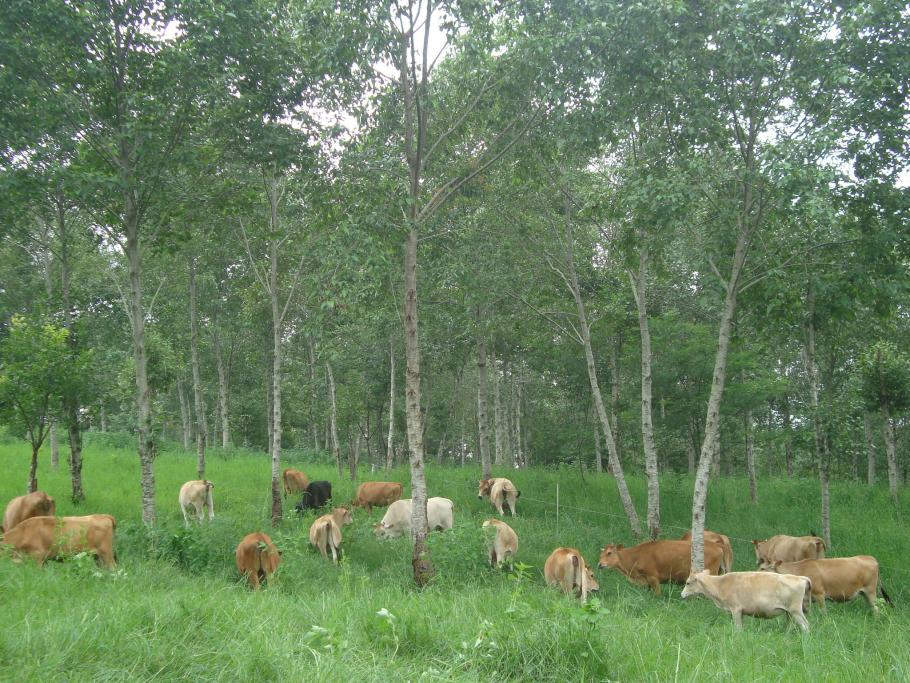 You identify Las Cañadas, a cooperative in Veracruz, Mexico, as a showcase of some of the world’s best climate mitigation techniques. What makes it a model?

There are ways to grow annual crops alone, grow annual crops with perennials, graze livestock, graze livestock among trees, grow perennial crops, and grow perennial crops in polycultures. Las Cañadas is doing all of those things and doing them well. They also keep meticulous records of labor, costs, nutrient cycling, and soil tests. And they do it not for demonstration purposes, but for food for members of their cooperative.

They’ve planted 50,000 native trees to reforest overgrazed parts of the land. They practice silvopasture, as well as intensive silvopasture, which is even cooler. Intensive silvopasture means that fodder trees are planted every square meter to be browsed repeatedly by livestock. When timber and other trees are added, intensive silvopasture sequestration rates are extremely high. They have a dairy where they make their own cheese and yogurt. They grind corn and make their own tortillas. They have composting toilets. They don’t have the kind of Board of Health and building codes that we have in the U.S., so they’re able to really go there with carbon farming in a way that’s exciting to see. The Mexican government approached Las Cañadas to run carbon farming trainings for farmers across the country.

You write that “the tropics have stronger carbon farming options than colder climates.” What about in non-tropical climate zones of the U.S.? What sites already exist that we might look to as models?

Agroforestry is being done on impressive scales in cold climates, such as China, France, and parts of Canada. There are people in the Midwest integrating black walnuts with annual crops and in the South integrating pecans with annual crops, but in general we’re running behind. We have lots of home scale models, but we don’t currently have large-scale commercially viable models. There are few multistrata operations at innovative small farms, such Mark Shepard’s Restoration Agriculture.

What can we do meanwhile? Grow perennial food crops. We’re basically already there with perennial industrial crops: there are biomass grasses and feedstock planted on large scales, and biochar, dye plant, and medicinal plant production on smaller scales. Milkweed is an example of a promising species for fiber and rubber. For annual vegetables, we should go organic with cover crops, crop rotation, and mulch. We should incorporate trees into annual systems to increase yields and build soil carbon and above ground biomass. We should also add trees to grazing systems, and grow timber, such as pine trees, in pastures. When you cut the timber for building, that’s long-term carbon sequestration that’s going to last a hundred years.

Reading this gave me chills: “Carbon farming may be a strategy with an expiration date.” Can you say more?

If the planet heats enough, rain will cease, soils and ecosystems will degrade, and the carbon currently held in soil biomass will be given off to the atmosphere and contribute to global warming. If our earth heats up, say, 3 degrees Celsius, up to 40 percent of the world’s ecosystems will start to off-gas, at which point the land is no longer good for carbon farming. Carbon farming coupled with emissions reduction is not a wait-until-the-last-minute kind of strategy. 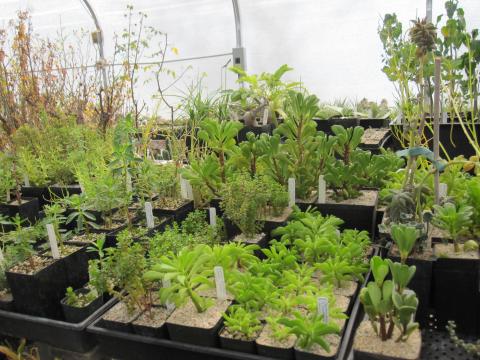 Were you satisfied with the outcomes of COP 21?

The two weeks I was in France felt like the coming of age of agriculture as a climate solution. Up until recently, we mostly heard about clean energy, which is excellent and necessary but not enough. The 4 percent initiative is a cool idea but dare I say a little simplistic. Increasing soil organic matter by 0.4 percent per year is a little one size fits all, but it’s great to see people signing onto it and building awareness. Many countries’ five-year climate action plans included a strong agriculture component. A lot of these countries are now saying, “my gosh, we committed to do all this stuff, what are we going to do?” The Paris Agreement was the best thing the 195 nations could have possibly done politically, but it’s a woeful failure in terms of what actually needs to be done.

What do you think about the Global Alliance for Climate-Smart Agriculture (GASCA)?

One problem with GASCA is that they’ve watered down the definition of “climate-smart agriculture” so that anyone that meets any single criteria, for example, intensifying agricultural production, is okay. That’s really business as usual for industrial agriculture. Then you look at who’s on GACSA—Walmart, McDonalds, and big fertilizer companies—and you start to become suspicious. Yet, have the critics of GACSA put together something else? Sitting there criticizing without making your own alternative is not helpful.

Are there other carbon farming-related greenwashing and policy pitfalls we should be aware of?

The silver bullet lure says that if we practice carbon farming, we can continue burning all the fossil fuels we want. That’s not the case. We have to sequester carbon and reduce emissions or else we’re toast as a civilization. Sequestration continues at a good rate for between 10 to 15 years and then more or less stops.

Another big risk to watch out for is carbon grabs, or land grabs. This is already happening on a large scale. Companies are buying huge swaths of land, clearing forests, and planting oil palms or biofuels in the name of the environment. People in places like Indonesia are having their civil rights violated. That’s not the kind of climate change mitigation we want. The way the European carbon market is set up requires industrial scale. But we know from scientists that carbon farming is more effective when it’s small and done by the people living on the land.

India is my favorite example right now. They’re working to move national forest cover from 25 to 33 percent, and they want to make this gain entirely by adding productive trees to existing farms. They’ve said, we don’t have enough land to devote it to purely environmental causes, so we have to find a way to meet human needs that are also good for the environment. For example, almost all plywood in India comes from poplars on farms that are also foods and fiber. India has worked closely with the World Agroforestry Centre on developing this policy, and there’s hope that it will become an international model.

You say that consumers can contribute to the viability of carbon farming by purchasing carbon farming “products” through a fair trade model. What would that look like?

Vermont’s Regenerative Farm Certification Bill was just introduced. Worldwide, the Sustainable Agriculture Network (SAN) is working on a certification for emissions reduction, but there isn’t a market for it yet. 200,000 farms have been certified sustainable through SAN, and assuming there’s a market, carbon is an easy thing for farmers to add on.

You write that “climate change mitigation may be one of the most important anti-racism projects of the 21st Century.” What does carbon farming have to do with climate justice?

The cool thing about carbon farming is that it’s a powerful technique for adaptation and can help people survive. Records show that Cuban and Guatemalan farmers that practice intercropping and agroforestry lose fewer crops and recover more quickly from hurricanes than those growing monocultures. It happens that the practices that sequester the most carbon are most ready to go in tropical places.

This provides an opportunity for wealthy countries to pay part of their climate debt by bankrolling the development of carbon farming practices and building industrial infrastructure to process carbon farmed crops. It’s an exciting prospect. The U.S. may not be the one leading the charge carbon farming, but we can fund mitigation.

Photos of carbon farming at Las Cañadas in Veracruz, Mexico courtesy of The Carbon Farming Solution.