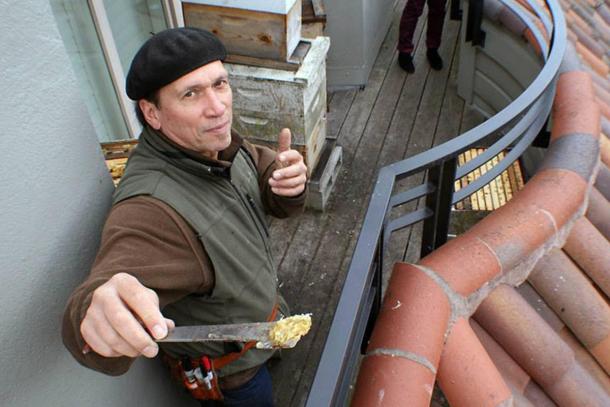 What does San Francisco taste like? The Mission District’s light, floral, almost citrusy sweetness comes from the many blooms that flourish in the city’s balmy banana belt, while the Presidio’s rich caramel and coffee notes take after the native manzanitas and wild sages that trails down to the coast.

That’s just a sample of the neighborhood honeys you might taste at City Bees. “People are blown away that each honey is so unique,” says San Francisco beekeeper Robert MacKimmie. “They immediately equate it to wine tasting.”

These local elixirs are the work of busy honeybees, who collect nectar from the city’s flora and transform it into “luscious goo.”

MacKimmie’s honeys vary from market to market, depending on which hives he’s visited that week. From Telegraph Hill to the Outer Sunset to McClaren Park, he’s built his business by installing and maintaining hives in the backyards of bee-positive residents across all corners of San Francisco. “Some of the beehives have the best real estate views in the city,” he quips. 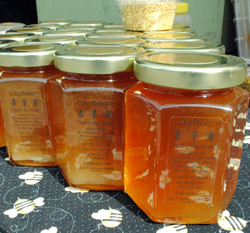 Coming from a background in fine art photography, MacKimmie dove into beekeeping in 1996, learning everything he could about the millennia-old practice. When he met Bay Area beekeepers Spencer and Helene Marshall of Marshall’s Farm Natural Honey at the Ferry Plaza Farmers Market, he bonded immediately and started volunteering with them.

“Within my first few months, I saw inside more hives than most backyard beekeepers see in their whole lifetime,” says MacKimmie, who worked with the Marshalls as an assistant for about a year. “Spencer has a very delicate and insightful understanding of bees, and I was able to get a lot of his sensitive training.”

When the recession hit in 2009, MacKimmie decided to make a full-time business as an urban apiarist. “To provide food for people in an economic crisis felt nurturing in so many ways,” he recalls. “It’s a curious moment to say, ‘I’m going to be a full-time farmer for the rest of my life,’ but I was really encouraged by beekeeping because you can do it forever. Hopefully I do it until the day I fall over!”

He’s built his business by installing beehives in backyards, gardens, and parks, partnering with hosts in a CSA-like fashion. He sells the honey at farmers markets and Bi-Rite Market, which host hives on their rooftops. Today he tends about 35 sites, mostly in San Francisco.

“It usually starts with having a simple and wonderful conversation with someone at a farmers market,” MacKimmie says. “There’s a tremendous number of people who are enthusiastic about helping the bees, because bees are so challenged. Hosts provide a spot in their backyard and get a share of the honey, and I bring the rest of the farmers market. It’s a way for them to share with their community while they’re sponsoring.”

Bees perform an invaluable service pollinating plants and trees, even in the concrete jungle of San Francisco. More than 35% of the world’s food crops depend on pollinators, but today they face unprecedented threats, including pesticides and climate change.

While neonicotinoid pesticides have been implicated as one culprit in colony collapse disorder (CCD), MacKimmie has witnessed bigger devastation from the Varroa destructor, which reproduces inside honeybee colonies and sucks the bees’ blood, spreading lethal viruses. He uses organic methods to control the parasitic mites, but due to cross-pollination between hives, mites can easily spread if infestations are left unmanaged.

“A lot of amateur and even some commercial beekeepers haven’t made themselves aware of how to control mite levels. Strong hives go out and rob those colonies of honey, but they also bring back the mite,” MacKimmie explains. “All of us are trying to breed bees that are resistant to the mites, but there are no ‘magic bullet’ bees yet.”

The drought has also hit the bees hard. “People don’t understand what the drought has to do with the bees,” MacKimmie has noticed. “No rain = no flowers = no bees.” 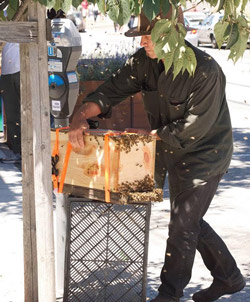 MacKimmie has hoped to start some new hives, but with hopes for a wet El Niño winter drying up, he worries that we may be entering a fifth year of drought. He remembers at time when flowers bloomed into July, but last year they stopped in May. Eucalyptus trees, which provide food for bees many months out of the year, have been particularly confused by the drought, producing less and less nectar.

While ornamental landscapes help nourish bees, backyards can provide only so much forage. As MacKimmie says, “You can irrigate apple trees, but bees depend on big parks and wild areas that are affected by rain alone.”

With the modern world posing increasing threats for honeybees, responsible bee husbandry is more important than ever, which is why MacKimmie makes a point to voraciously consume the latest research. “If you’re beekeeping like you did five years ago, you’re in the dark ages,” he says.

In addition to using organic methods to control pests, he helps support his bees in the lean months by supplementing their forage with a mix of brewer’s yeast, essential oils, and a little sugar (never corn syrup). “It’s like a protein bar for bees,” he says, noting that he sometimes snacks on it himself.

“If you help bees to be healthy and stay strong, they produce more honey than they need,” MacKimmie says. “It’s a partnership where I’m helping to level the playing field for them, taking away disadvantages that humans have introduced, so they have the opportunity to flourish and be productive.”

Being a city, of course, has its own challenges for the bees, since so many natural landscapes have been paved over. But while many cities have a consistent temperature and ecology, San Francisco’s warm, Mediterranean climate and diverse topography of hills and valleys makes it a veritable buffet for bees. Each neighborhood has its own microclimate, with interplays of sun, shade, wind, and fog. This allows a wide array of plants to flourish, contributing to the diversity of flavors that emerge in the honeys.

Reintroducing bees to the urban landscape has benefited both the bees and the community, revitalizing trees that were once unproductive to bear fruit. “By taking care of bees, you fill in the infrastructure that nature provides for pollination that hasn’t been there because of disease and globalization,” MacKimmie says.

At his latest outlet, the popular Ferry Plaza Farmers Market, he can continue to turn people on to the nuanced flavors of local honeys, and educate and recruit more bee lovers to the cause: “The farmers market is extremely valuable as an interface to bring some the world’s most remarkable honeys to an audience that is so eager to participate.”

But ultimately, for MacKimmie, working with the bees is its own sweet reward. “Bees are extremely intelligent and gentle. You can tell from their behavior that there’s a longstanding domestic relationship. If I’m working a hive and there’s a stray bee, I’ll just put out my finger and the bee will walk up and I’ll put it back in the hive. The fact that I’m able to do this as a profession is really wonderful.”

A version of the post originally ran on the Center for Urban Education about Sustainable Agriculture (CUESA) website. Photos courtesy of Robert MacKimmie/City Bees.