The East Coast chain just kicked off its ‘Produce with Personality’ pilot, which will make ugly fruits and vegetables available at prices 20-25 percent below their standard produce. 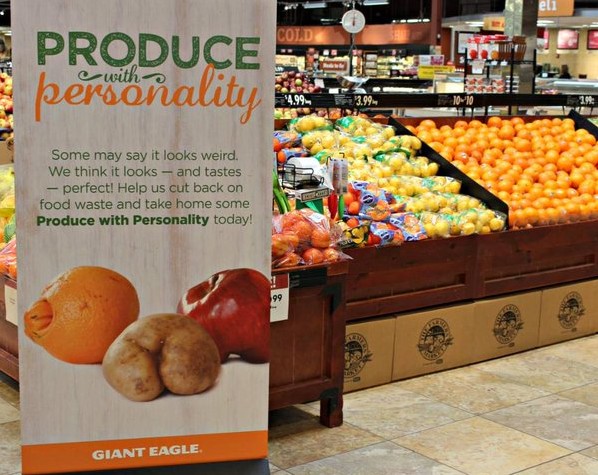 Funny, Imperfect, Inglorious, Misfit, Ugly, Unloved. These are just a few of the affectionate names businesses are using for less-than-perfect fruits and vegetables they hope to rescue from the landfill. Now, Giant Eagle Supermarkets has launched a pilot program called “Produce with Personality,” making it the largest supermarket in the U.S to sell ugly produce so far.

Last summer, Raleys—which has 100 stores in California and Nevada—debuted an ugly produce pilot program in 10 stores modeled on several popular European sales campaigns. Then, Associated Foods in Utah followed with their own small pilot in the Fall. Whole Foods Market is also planning an ugly fruits and vegetables pilot program. (In Canada large supermarket chains Safeway, IGA, and Loblaws have all had success with uglies.)

While the Giant Eagle pilot will take place in just five Pittsburgh stores, the chain has 420 stores in five states in the eastern U.S. Because the store is aimed at discount shoppers, more affordable ugly produce has the potential to do well with their customers.

“‘Produce with Personality’ is produce that has cosmetic imperfections. Those imperfections allow us to offer these items to customers at very attractive prices,” said Giant Eagle’s marketing director Dan Donovan in a statement.

Considering the fact that approximately 20 percent of the food that comes through the doors at Giant Eagle ends up wasted, that’s less “shrink” or loss on the books for the supermarket.

While ugly produce sales haven’t quite taken off in the U.S. yet, the business case for selling these less attractive fruits and vegetables has been building steadily with the arrival of produce delivery companies such as Imperfect of Emeryville, California and Hungry Harvest of Columbia, Maryland.

Just eight months into business, Imperfect has 2,300 active customers and sells over 70,000 pounds per month, according to COO Ben Chesler. Ever since Shark Tank awarded the start-up $100,000 in January, Hungry Harvest, has been expanding rapidly and now has over 2,500 active customers selling 60,000 pounds a month, says the company’s CEO Evan Lutz.

The “Produce with Personality” campaign will begin by focusing on “personality-filled” navel oranges, russet potatoes, peppers, and apples. Dick Roberts, a spokesperson for Giant Eagle told Civil Eats, “As we continue to explore sourcing options, we will evaluate continuing the program further into the year.”

At a time when 87 percent of Americans are not eating their recommended five servings a day—and recent research suggests that lowering the price of produce by 30 percent would save approximately 200,000 lives—affordable, ugly produce could play an important role in making more Americans healthier.

Companies like Imperfect and Hungry Harvest sell ugly produce for 25 to 50 percent below standard prices. Farmers are willing to sell it to them for less because approximately 23 percent of fruits and vegetables are wasted before the store in the U.S. This is due mostly to the cosmetic restrictions large grocers and produce marketing associations impose on farmers—reasons that have no bearing on taste, shelf-life, or nutrition.

While California produces more than half the country’s produce, Giant Eagle’s neck of the woods is not quite as bountiful. However, Evan Lutz of Maryland-based Hungry Harvest believes there’s more than enough “ugly” produce to go around. “There is more than 6 billion pounds of produce going to waste in the U.S.,” he told Civil Eats, adding that it will be a while before anyone has to compete for supply.

For now, Giant Eagle has begun educating its customers about the value of imperfect produce. As its marketing director Donovan noted, “the next time you see an imperfect apple or orange, give it a try—it tastes better than it looks.”