For School Lunch, Kitchens as Important as Ingredients? | Civil Eats

In the Case of School Lunch, Kitchens Might Be as Important as Ingredients 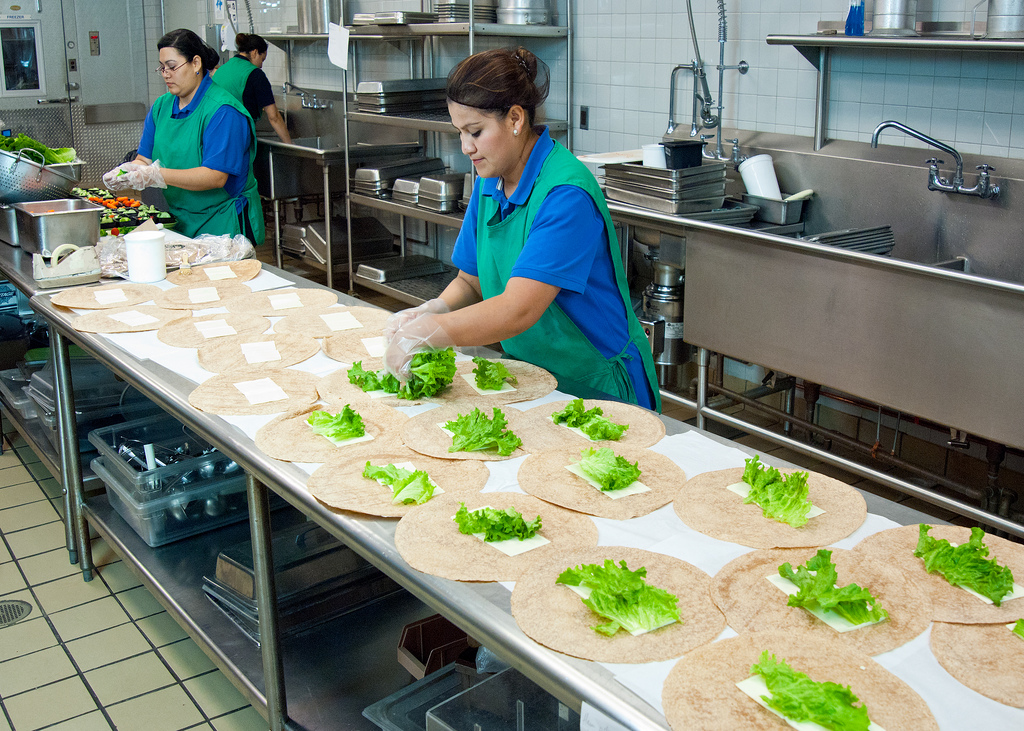 Around the country, schools have been working to serve more nutritious meals, with less highly processed food and more fresh fruits and vegetables. Unfortunately, many of those schools are also stuck with outdated kitchens—the kind best suited to opening cans and reheating frozen chicken nuggets.

But unlike the recent controversy over federal school food nutritional standards, which attracted significant media attention and a lot of highly-charged partisan debate, school kitchen equipment is often an afterthought — even though it’s just as vital.

After all, what good is a shipment of fresh, nutritious vegetables if a school lacks adequate refrigeration to store it, enough cutting boards and knives to prepare it, or the proper equipment to prepare healthy meals?

A 2014 Pew Charitable Trusts report found that 88 percent of districts currently lack at least one piece of equipment needed to serve kids healthy meals, forcing many to engage “workarounds that are expensive, inefficient, and unsustainable.” And most lack much more than that. According to Pew, “more physical space” was the most commonly reported need. But that’s not where the list ended. Here are a few additional examples:

Given these numbers, it’s not surprising that the school food community has welcomed the idea of additional funds. Diane Pratt-Heavner, spokesperson for the School Nutrition Association (SNA), says the 55,000-member group of school nutrition workers was “pleased” to hear about the proposed increased funding for school kitchens.

She points to a recent SNA survey that revealed that many school districts have used the money they might have spent on new equipment to offset financial losses in their meal programs. “These grants will help support ongoing efforts by schools to invest in the necessary equipment to increase scratch-prepared recipes and serve more fresh produce,” Pratt-Heavner told Civil Eats.

But just how far will $30 or $35 million go to overhaul underequipped school kitchens? The short answer is: Not very far.

Forty-three percent of today’s public schools were built in the 1950s and 60s. And while the U.S. Department of Agriculture (USDA)’s Equipment Assistance Program was intended to keep school kitchens up-to-date, Congress failed to fund the program for three decades, starting in the 1980s.

The effect of that long period of neglect became manifest in 2009-10, when Congress finally did provide $100 million for kitchen infrastructure as part of the federal stimulus package and another $25 million in the fiscal 2010 budget: Grant requests from school districts came to five times that amount, or $630 million. And, of course, that figure only takes into account the districts that applied for funds. The Pew survey actually pegs total school kitchen infrastructure and equipment needs at $5 billion nationwide.

So while no one would criticize the Obama administration’s well-meaning $35 million appropriation—it’s more than any budget has provided since the 2009 stimulus hand-out—the sum is a drop in the bucket. Jessica Donze Black, director of the Kids’ Safe and Healthful Foods Project (a joint initiative of Pew and the Robert Wood Johnson Foundation), calls recent appropriations “critical to addressing the equipment challenges in schools,” but she acknowledges that they fall short. “Truly resolving the current situation will require investment and innovation at the federal, state, and local level,” she adds.

Absent sufficient federal funding, where can struggling districts turn to finance needed kitchen upgrades? Black suggests they maximize their revenue by employing strategies such as “expanding meal service to include breakfast and afterschool programs” as well as “offering catering to increase facility utilization,” and then invest the additional funds in kitchen equipment. There’s also the possibility of seeking outside philanthropy; some districts have successfully partnered with health-minded or anti-hunger nonprofits willing to foot the bill for salad bars or other equipment likely to improve student nutrition.

But districts in need of larger kitchen upgrades, such as creating more storage space or replacing outdated plumbing, may well be interested in the low-cost loan program proposed in the pending Senate child nutrition bill. Modeled on the USDA’s existing Community Facilities Direct Loan & Grant Program, the program would allow districts to finance these costly improvements at a very low interest rate to be paid back over a long period of time. And the risk to the federal government would be low, as few districts would be likely to default on such loans.

In practice, though, it might not be easy to get districts to take advantage of the program. At a 2013 Kids’ Safe and Healthful Food Project workshop on school kitchen equipment, some school nutrition directors complained that “many districts may not understand how to incorporate equipment needs into capital budget plans. Others reported a lack of collaboration with food service staff when school districts budget for and coordinate capital expenses.”

It remains to be seen whether Obama’s $35 million appropriation will survive the 2017 budget negotiations and whether the final Child Nutrition Reauthorization law will in fact contain the Senate’s proposed low-interest loan program. But one thing is clear, school districts have been charged with serving healthier food to 31 million kids every day, yet many of them lack—and may continue to lack—the equipment they really need to do the job.