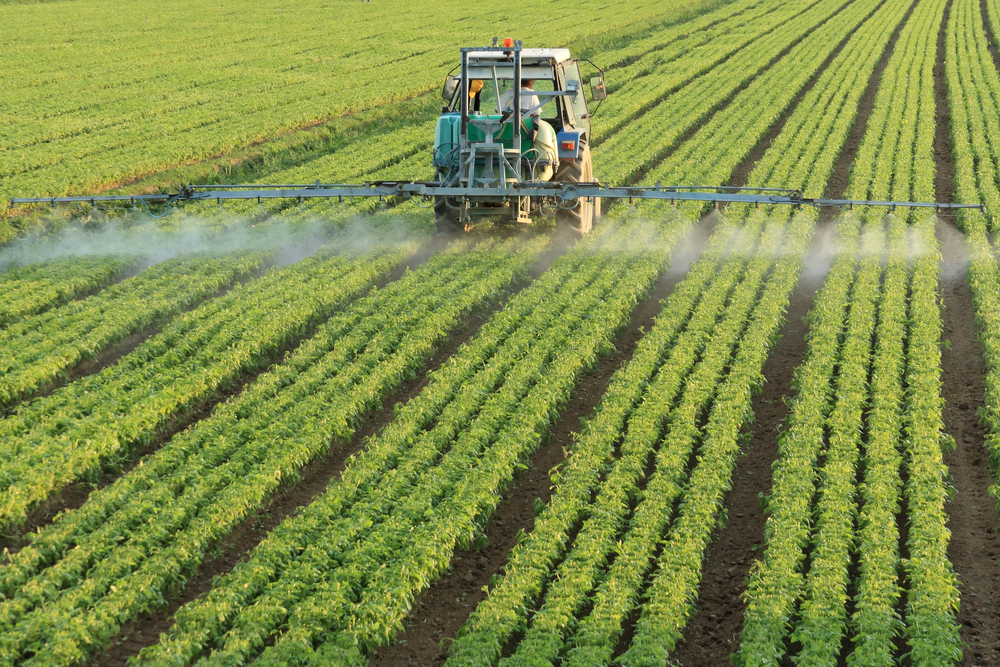 Another full week of food policy news has passed, but don’t worry, we’ll get you caught up.

A study published this week in Environmental Sciences Europe found that the use of glyphosate, the active ingredient in Monsanto’s Roundup herbicide, has increased fifteen-fold since 1996. Nearly two million tons have been used in the United States since the herbicide’s introduction in 1974, and 9.4 million tons have been sprayed onto fields worldwide. Last year, the World Health Organization’s International Agency for Research on Cancer determined that glyphosate is “probably carcinogenic to humans.” Other research has shown that glyphosate interferes with the proper functioning of the endocrine system.

The food industry, which has spent millions of dollars to fight ballot initiatives and bills that would require the labeling of genetically modified foods, is pressuring Congress to pre-empt Vermont’s GMO labeling law before it goes into effect this July. Agriculture Secretary Tom Vilsack has been working with the food industry and labeling advocates to strike some sort of compromise, but the industry strongly opposes mandatory labels, and lawmakers are divided, too. Industry is in favor of voluntary digital labels, but labeling advocates say they discriminate against people who don’t have smartphones and computers. Debbie Stabenow (D-Michigan), ranking member of the Senate Agriculture Committee, has been working with Senator John Hoeven (R-North Dakota) to find a bipartisan compromise, but Hoeven said earlier this month that they’re not there yet.

The Food Movement is Small? Not From Where We Sit, It Isn’t. (Washington Post)

A Washington Post columnist recently argued that the number of people who really care about where their food comes from, how it is grown, and its impact on our health and the environment is surprisingly small. Anna Lappé, author, Civil Eats contributor, and director of Real Food Media, and Chellie Pingree, a U.S. Representative and farmer, respectfully disagree. Lappé and Pingree say they talk to consumers, farmers, and retailers every day about food buying choices, and they have witnessed change happening across the country—in grocery stores, in school cafeterias, on family farmers, and even in the halls of Congress.

As the saying goes, “if you can’t beat ’em, join ’em.” After suing vegan mayo maker Hampton Creek for false advertising (and later dropping the lawsuit), Unilever, parent company of Hellmann’s, is launching its own eggless spread, called “Carefully Crafted Dressing and Sandwich Spread.” According to the Food and Drug Administration (FDA), “mayonnaise,” must contain eggs. The FDA sent a letter to Hampton Creek this summer saying that Just Mayo’s name was misleading because of its lack of eggs, but the company was able to keep the name in exchange for a few label adjustments to make it clearer that it does not contain eggs. Hellmann’s, which is also introducing its first organic mayonnaise this month, says it is catering to customers’ tastes. Hampton Creek CEO Josh Tetrick isn’t threatened—he says that such options from major food companies will create a bigger market for plant-based alternatives.

China National Chemical Corp. has agreed to buy Swiss pesticide and seeds maker Syngenta for more than $43 billion in cash. The deal would help transform ChemChina into the world’s biggest supplier of pesticides and agrochemicals. National interests are reportedly behind the company’s pursuit—Chinese President Xi Jinping is looking to boost agricultural output to maintain self-sufficiency as China’s growing middle class consumes more grain-intensive meat and the country’s arable land declines. Monsanto attempted to acquire Syngenta several times last year, but was repeatedly rejected. Now, with the merger of Dow and DuPont, its market-leading position in genetically modified seeds is threatened. Here’s a related commentary piece: Why Seed Company Mergers Matter in a Warming World.

In an effort to take on one of the country’s biggest food safety problems, the U.S. Department of Agriculture (USDA) has announced, a new, stricter limit on salmonella bacteria in poultry products. Under the new standard, companies will be required to reduce the frequency of contaminated chicken parts to 15 percent or less. Currently, federal data says that 25 percent of raw chicken pieces are contaminated with the bacteria. The USDA says that when companies meet the new standard, 50,000 fewer people will get sick from salmonella each year.

Farmworkers are supposed to be protected by government rules regulating exposure to toxic farm chemicals, but an Associated Press review of federal and state enforcement data and other records reveals that the pesticide-safety system is riddled with problems. The Obama administration recently adopted tougher farmworker protections after 20 years of debate and fierce resistance from the chemical and agricultural lobbies. But when they take effect in 2017, all of the new rules will still rely on the existing enforcement system, and in all states except California, enforcement of federal pesticide-safety laws is managed by the same agencies that promote agricultural industries.

With the goal of moving the $36 billion dairy industry in a more sustainable direction, The Innovation Center for U.S. Dairy, an industry group, has released proposed updates to its voluntary sustainability metrics for dairy farm operations and producers. The group’s first sustainability standards, released in 2013, include guidelines for measuring and communicating energy use, greenhouse gas impact, and animal care. The updated version adds metrics for water use and quality, soil and air quality, biodiversity, waste management, and feed management.  Although many in the dairy industry are excited about the new guidelines, voices in the sustainability field question whether voluntary measures have enough power to effect needed change.

Chipotle, once known for healthier, fresher fast food, has been playing defense for much of the past few months, after multiple E. coli outbreaks sickened 60 people across the country. The fast casual restaurant’s co-chief executive, Mr. Ells, who has said, “Food safety is the most important thing,” has thrown himself into overhauling the chain’s food safety practices, from adding ingredient tests to altering how employees marinate meat. The Centers for Disease Control and Prevention still hasn’t pinpointed an ingredient source, but closed its investigation Monday, saying that the outbreaks appear to be over. Chipotle and government officials disagreed about the source of the E. coli—the government thought it was produce, while Chipotle concluded that it was from contaminated Australian beef.

A new poll of nearly 1,900 adults living in the U.S., conducted last month, found that 58 percent said they had tried to limit sugar in their diets in the previous 30 days—higher than the percentage of those who were trying to restrict their intake of calories, sodium, fats, cholesterol, or carbohydrates. Just last month, in the 2015 dietary guidelines, the U.S. government said that Americans should keep their intake of added sugars to less than 10 percent of daily calories—the first time it recommended a specific limit.