Aside from ethanol, food and farming have been scarce on this year's farm state campaign trail. 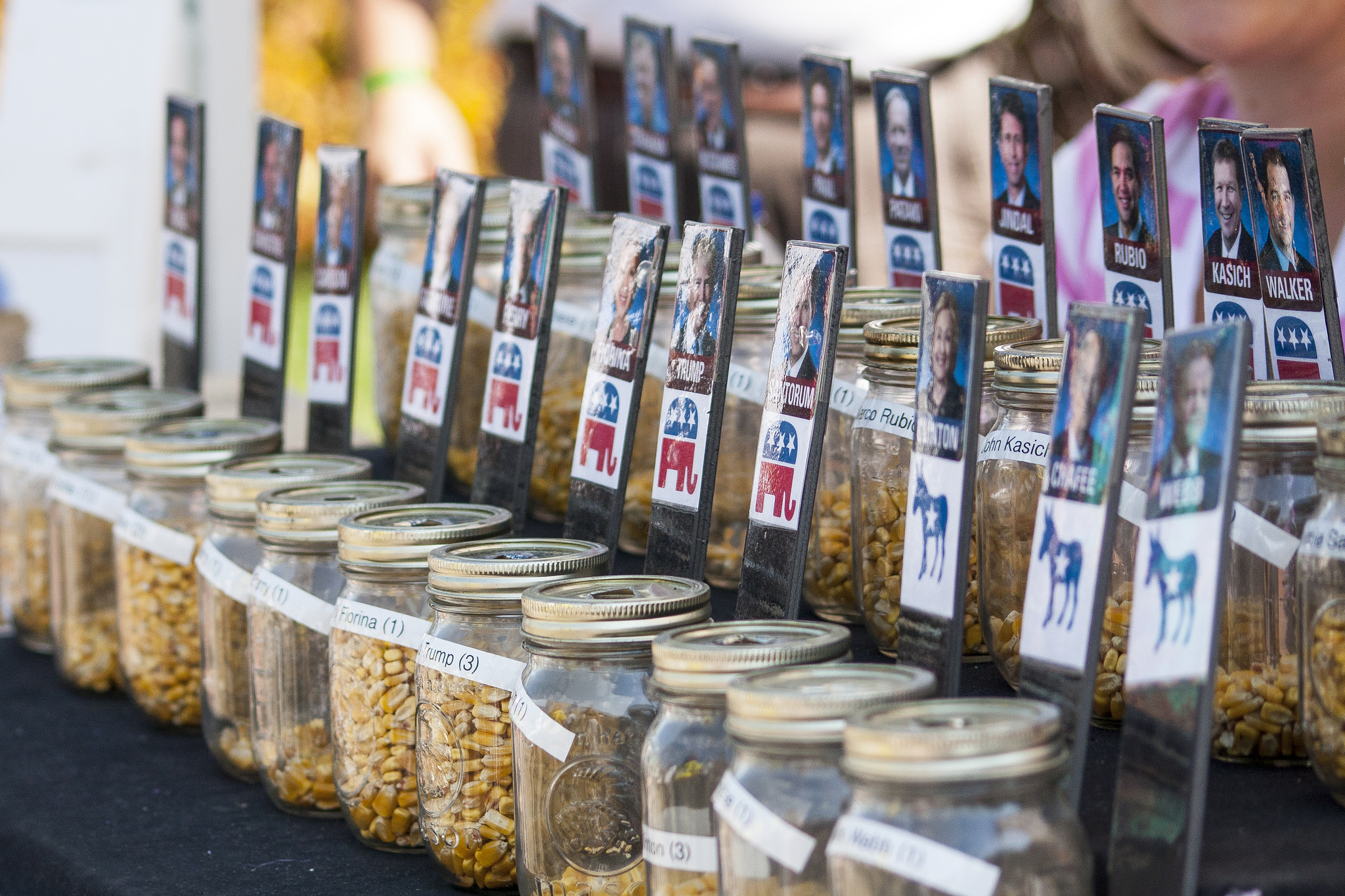 Over the last few months, most of the presidential candidates have found their way to Bill Couser’s farm in Nevada, Iowa, where he raises more than 5,000 head of cattle, and grows corn and soybeans. Couser says he’s played host to all the Republicans vying for the Oval Office this cycle in the conference room he built at his feedlot specifically for the parade of presidential candidates.

“Carly Fiorina—I was with her yesterday,” Couser told Civil Eats. “I sat with Trump for a couple hours last week.”

But unlike in the lead-up to past Iowa Caususes, when Ben Carson or Ted Cruz arrive at the Couser farm, the candidates’ ears aren’t being bent on food production, land access, or even a specific wishlist for the next Farm Bill. When he’s with the candidates, Couser grills them on ethanol, or fuel made from corn byproduct.

As a co-chair of advocacy group America’s Renewable Future and a corn grower, Couser wants to make candidates understand what ethanol means to farmers. He has made it his mission to educate each candidate on why they should support and strengthen the Environmental Protection Agency’s Renewable Fuel Standard (RFS)—which requires that transportation fuel sold in the U.S. contain a certain percentage of “renewable” fuel—usually ethanol.

“We want to make sure that stays intact and that we build on this new energy. As a farmer, that’s my safety net now. It’s a win-win for ag and a win-win for small communities,” he says. And he’s not alone. According to a recent poll, more than three out of four likely Iowa caucus-goers support the 2007 requirement.

Although many of the voters in next week’s caucus will be farmers and farmworkers, food rarely comes up in the campaigns in Iowa these days, says Dr. Steffen Schmidt, Iowa State professor of political science. Schmidt has closely observed every Iowa caucus since 1970, and he says even Democratic candidate Bernie Sanders, who has arguably the most fleshed-out and progressive positions on food productions and farms, has not made the subject a regular part of his Iowa stump speech.

Sanders has, at times, hedged when asked about his positions, too. When asked by a Carroll Daily Times Herald reporter last summer whether his opposition of all things big (banks, money) extends to farms, he responded, “Good question, I just don’t know,” before continuing, “I’m not a great fan of factory farming, I should tell you that.”

Schmidt remembers when non-fuel-based agriculture was among the top four or five issues during the caucus. These days, though, he says candidates may bring up an issue specific to food production, such as federal crop subsidies, about once a decade, when the Farm Bill is up for reauthorization.

“Other than that, what comes up mostly nowadays is ethanol and renewable fuels,” says Schmidt, who is also a neighbor of Couser’s.

One reason traditional agricultural issues have moved to the background in Iowa politics is that fewer Iowans than ever are farming—just 66,000 of 3.1 million people—resulting in fewer voters considering agriculture when they vote.

But even among the remaining farm voices, agriculture is seemingly off voters’ radar this election cycle—despite a quarter of Iowans being directly connected to farms and farming. Iowa State pollsters asked 1,074 likely caucus-goers about the “most important problems facing the country today,” and agriculture did not make the final list of 16.

In one recent exception, Sanders released an ad online featuring a third-generation farm couple speaking out against a proposed crude oil pipeline that would cut diagonally across the state, threatening to take significant amounts of farmland, some by eminent domain. But even in that case, the ad steered around addressing farming explicitly.

On the Republican side, voters’ preference for non-agriculture issues may explain why social conservative Senator Ted Cruz continues to do well in Iowa—where he is currently in second place, but has led at times—despite his publicly stated desire to phase out the Renewable Fuel Standard. Earlier this month, Iowa Governor Terry Branstad publicly denounced Cruz, citing his opposition to renewable energy and support from oil companies. Cruz and Senator Rand Paul are the only candidates from either party who oppose the RFS. Cruz and Paul represent a current GOP that is “anti-government” and “anti-spending,” says Schmidt, which may be another reason why this year’s candidates have not talked as much about food and farming. Fuel production is an easier lift for the current crop of Republican candidates.

Couser insists that his concerns extend beyond energy interests, however, such as the recent attempt to restructure the dietary guidelines and the Des Moines’ lawsuit against rural counties for allegedly polluting the city’s water supply—issues he says he discussed with Agriculture Secretary Tom Vilsack recently.

“It’s all very important to us,” he says. “We want to make sure we have a seat at the table and are not just on the menu.”

Separate from the interests of large-scale agriculture, chef and activist Kurt Michael Friese—who edits Edible Iowa River Valley—says he’d like to see candidates talking more about issues such as school lunch reform. And launched last fall, the Plate of the Union campaign is challenging presidential candidates to discuss solutions to problems like food access, diet-related illness, the treatment of food workers, and the impact of agriculture on the environment.

Then, during Monday’s Democratic Town Hall, televised on CNN, former Maryland Governor Martin O’Malley answered a question from Iowa Farmers’ Union President Jana Linderman about how he would provide opportunities for young farmers and small family farms. O’Malley’s answer—he would use the Farm Bill to lower the barrier for young people who want to farm, pushing back against consolidation in agriculture—might have pleased sustainable farming advocates, but neither Sanders not Clinton was asked about farming.

That’s because in a state where corporatization and consolidation has dramatically cut into the number of smaller, family-run farms, sustainable agriculture advocates are generally outnumbered when candidates show up in Iowa. Friese remembers cornering then-Senator Barack Obama at a 2007 Earth Day rally in Iowa City and asking him what he would do to transform an industrialized food system. After indicating that he’d been moved by a recent Michael Pollan column in the New York Times, Obama followed with a sobering piece of advice: “If you want to do anything in Washington about [the food system], you’ve got to bring me 1 million people. That’s the only thing that will counteract the billions of lobbyist dollars.”

Back in Iowa, Bill Couser says he and many of his neighbors are tired of being bombarded by political ads, but glad that the candidates start their campaigns in farm country, and bring the media with them. Has he met the perfect Iowa candidate in this field?

Many of them are “very smart and understand most issues,” but “when [they] come to the Midwest and talk about ag,” he says, “they’re all just a little bit short.”