Humane Weaning is Better for Animals and the Bottom Line, Say Farmers

Cows allowed to stay connected to their mothers through the weaning process are more likely to thrive. 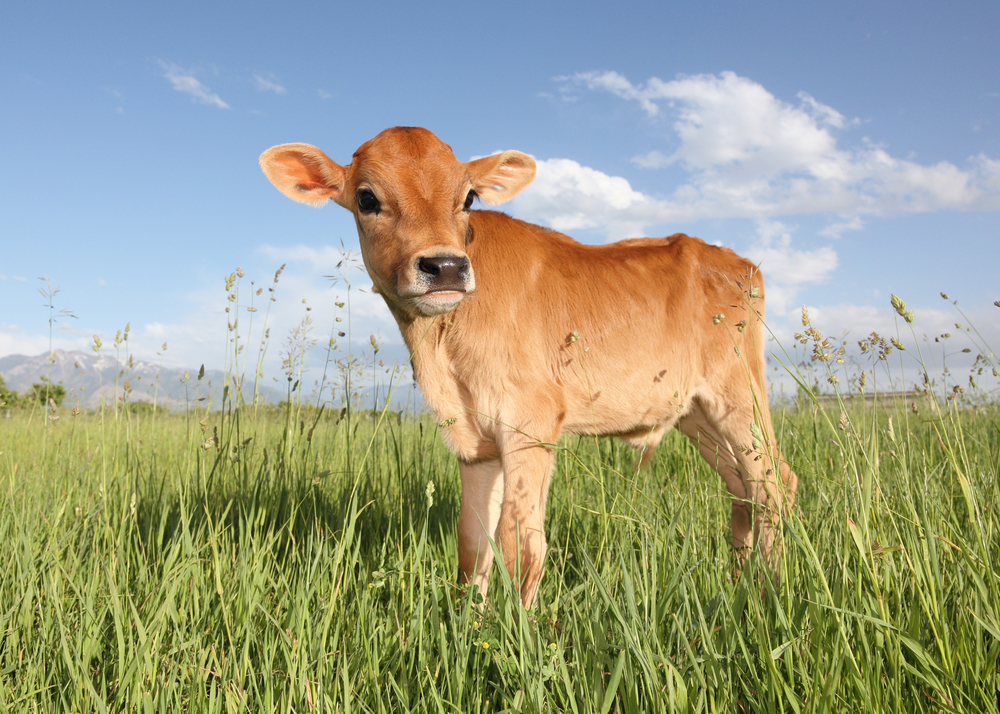 On most beef farms and ranches, calves are weaned from their mother when they’re around six months old. The tiny animals are introduced to a new diet, a new environment, and they have to learn new rules of social organization with their fellow calves.

You could compare it to a six-year-old child traveling to a different country without a parent and having to adjust to new foods, new surroundings, and new cultural norms.

Though it’s a difficult process for both calf and cow, weaning is necessary on beef farms and ranches because mother cows must be re-bred soon after giving birth in order to produce a new calf. If a mother is still nursing her previous calf while gestating a new one, energy is taken away from the growing calf within and from the mother’s own body, which must be strong for the next birthing.

Recognizing that young calves and their mothers endure significant stress during the weaning process, some beef operations are now practicing “low-stress weaning,” which has economic benefits to the farmer, as well as clear benefits to the animals. And some small dairy farms are using “mother-bonded weaning” and foster cow mothers to decrease weaning stress.

Farmers and ranchers see alternatives such as these as a vast improvement over conventional weaning, during which calves and cows are abruptly separated and not allowed to see, hear, or smell each other again, often resulting in abnormal behaviors such as bellowing and pacing.

Farmer Janet Steward, of Greenfield Highland Beef (captured in the video clip below) says she started practicing an alternative approach called “fenceline weaning”–also called “nose to nose weaning”–because it seemed more humane than traditional weaning. Then, she says, “we began to notice that the calves don’t lose as much weight.”

Steward, who runs the farm with her husband Ray Shatney in central Vermont, allows mother cows and their calves to live briefly on opposite sides of a slatted metal gate after they are physically separated. The mothers are let onto pasture every day but return to the barnyard three to four times a day to check on their offspring.

Through the gate, the pair can touch noses, smell each other, and call to each other–without nursing, of course. The proximity offers meaningful connection, given that the mother-calf bond is partially facilitated after birth through licking, vocalizations, and the release of hormones.

After 10 days or so, Greenfield Highland’s mother cows no longer actively come down from pasture to visit their calves, and milk production slows down. When the calves no longer call for their mothers and are eating comfortably, they are moved onto their own pasture.

Steward and Shatney first heard about fenceline weaning about 10 years ago, at a workshop given by the American Highland Cattle Association, and decided to give it a try. The couple say that after initial physical separation, their cows and calves do engage in the kind of bellowing that is typical with abrupt weaning, but they’ve found that it’s over sooner than when they weaned conventionally. And their calves generally eat more, which allows them to put on weight faster and provide more economic value.

A 2003 University of California study backs this up. It compared growth rates of calves weaned in different ways and found that “fenceline-weaned calves gained at least 50 percent more weight the first two weeks after weaning than calves weaned by other methods,” according to one summary of the study. “They also retained that weight advantage through at least 10 weeks post-weaning.”

The number of farms and ranches practicing fenceline weaning isn’t tracked, but it’s not a fringe practice. Beef, an industry publication, has run a number of articles on the practice, and a handful of universities have sponsored studies. Greenfield Highland Beef is a small operation, but ranches with thousands of acres also practice fenceline weaning.

Another way to wean beef calves is through “two-step” or “two-stage” separation, in which a plastic nose flap is inserted in to a calf’s muzzle to prevent nursing (while still allowing grazing). When calves go to the udder, the flap keeps them from accessing the teat; some devices include small spikes that irritate the udder and lead the cow to push her offspring away.

Research indicates there is less weaning stress in calves with nose flaps but the animals do get frustrated with the insertion of the flap, and eventual physical separation from the mother does spark behavioral changes.

“Weaning is a difficult thing to study, because how an animal feels can only be measured through their behavior,” says Sara Shields, a behavior and welfare specialist at Humane Society International. “But we know there’s a relationship between mother and offspring that has evolved over millennia. It’s important to understand and respect it.”

Humane Farm Animal Care, the nonprofit that audits farms for the Certified Humane label, doesn’t require fenceline weaning for beef cattle, but strongly recommends it. They prohibit the use of nose flaps. Animal Welfare Approved, another humane certifier, recommends, but doesn’t require, two-stage separation for both beef and dairy calves.

Beef farmers aren’t the only ones changing the way they wean their calves; some dairy farmers are also looking for creative solutions.

On the vast majority of dairy farms, cow-calf separation happens 24 hours after birth. The belief is that near-immediate separation avoids the establishment of a mother-offspring bond that only gets harder to break as time goes on. (Early separation also allows the farm to sell more milk from the cow.)

However, separation at 24 hours keeps mothers and calves from engaging in the natural behavior of direct nursing. Instead, calves are bottle fed by farm workers.

Seeking to respect the mother-calf bond, some small-scale dairy farms are choosing to put newly-weaned calves on a “foster mother”–a cow whose milk is not going into the farm’s saleable supply. Calves can experience direct nursing this way, and the farm can save on labor costs from bottle-feeding those calves.

Alternatively, some farms allow calves to nurse on their mother for a limited time while she continues to be milked by the farm. Called “mother-bonded nursing,” the process allows a natural relationship to develop between mother and offspring, though eventual weaning could still be stressful.

A detailed report on dairy cow fostering and mother-bonded nursing by the Research Institute of Organic Agriculture and the Association for Biodynamic Agriculture of Switzerland reveals that dairy farmers in Europe are practicing a number of different alternative approaches to weaning.

Pigs wean naturally between eight and 18 weeks but are weaned on most farms at two to four weeks. (Animal Welfare Approved prohibits weaning before six weeks and Certified Humane prohibits it before four weeks.) As with cows, research shows that piglets engage in abnormal vocalizations and pacing after early weaning, and will often belly-nose their pen mates long after the weaning process is over.

Ideally, says Humane Society International’s Shields, farm animals would simply be allowed to wean naturally, at whatever time felt right to them. When left to wean on their own, cows and calves end suckling between seven and 14 months.

“Ultimately what we would love to see is farms that are able to respect the natural timeline,” Shields says. “Nature knows best.”

But on a farm, where economic viability is key, farmers must wean. And for Janet Steward of Greenfield Highland Beef, the choice to wean in a low-stress manner “fits into everything we strive for at the farm.”

“Our overall goal is for our animals to have a really good, comfortable life,” Steward says. “This kind of weaning is just one more part of helping them live that kind life.”