As the site scales up its lunch program, it looks to its core audience: small entrepreneurs. 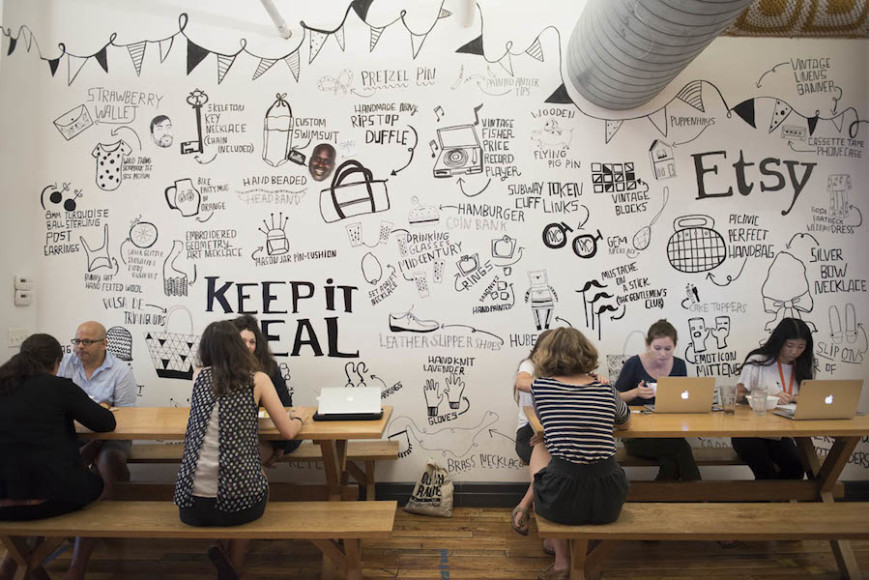 A version of this story was originally published in Edible Brooklyn.

Etsy’s global headquarters in DUMBO looks like what one might expect: Many of the exposed air ducts wear crocheted sweaters, Etsy-sourced artwork decorates the walls (an octopus tentacle reaches over the kitchen), and energetic young people cluster around open work stations or recline on couches with laptops perched on their knees. There are dogs.

On the day I visited, there was also food, and not a sprawling cafeteria, but a long table crowded with compostable paper bowls of ramen, waiting to be customized with scallions, roasted garlic, white pepper and togarashi (a Japanese spice mixture). “The food program has been around in one form or another since the company was founded,” says global food program manager Will Robb, a physically imposing but persistently soft-spoken man with gray muttonchops and a thick goatee. “It basically started [with] everyone sitting down and having lunch together around a picnic table.”

In the early days, circa 2005, there was the “waffle meeting.” Two of the company’s founders, Chris Maguire and Haim Schoppik, made the waffles and served them at company-wide staff meetings held in Etsy’s original Brooklyn office on Gold Street. Communal lunchtimes were a separate and ever-evolving affair that started with brown-bagging and evolved to employee-cooked meals. There were a lot of beets and boiled eggs since local sourcing and simplicity were equally essential. 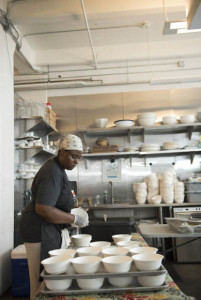 Now there is Eatsy: a twice-weekly catered lunch program that is available to all of Etsy’s 700-plus employees at each of their nine global offices, including the DUMBO location, which houses the majority of the company’s staff. Each office manages its own Eatsy program, but since coming onboard a year ago, Robb has offered guidance and support, from Brooklyn to Melbourne and Paris. This involves more listening than mandating; for example, he’s followed a banana debate (they’re not on the menu in DUMBO but popular in London) and developed surveys to determine what employees want.

He has a background in statistics and data collection, but also in food system reform. Robb worked for many years with Vermont’s Intervale Community Farm, where he saw that a business could be sustainable for its workers, the community and the environment. “At the Intervale, I asked myself, ‘What can we do to make this happen everywhere? To create an economy that is regenerative and not restrictive?’”

Those values were already at the core of Eatsy’s design when Robb arrived, and part of his job is to ensure Eatsy’s values are upheld as the company grows. One of these goals is to support local farmers and small-scale caterers in the same way a fledgling ceramic artist or seamstress can gain a market foothold by opening an Etsy shop.

Katie Rose Crosswhite, Brooklyn’s Eatsy manager, recruits all of the program’s caterers. Some of them are regulars, like Nahvae Frost of Eleven36, who served up the ramen on the day I visited. But Crosswhite is always looking for new talent. She trolls the vendor list of Brooklyn’s famed food truck extravaganza, Smorgasburg, looking for potential collaborators, and she seeks out reviews for restaurant chefs and caterers wherever she can find them.

“For a while I was on that dating site, ‘How About We’ because they always give suggestions about what restaurants to go to,” she says. “I have spent so much time on New York magazine’s wedding site–it is sort of embarrassing considering how single I am.” 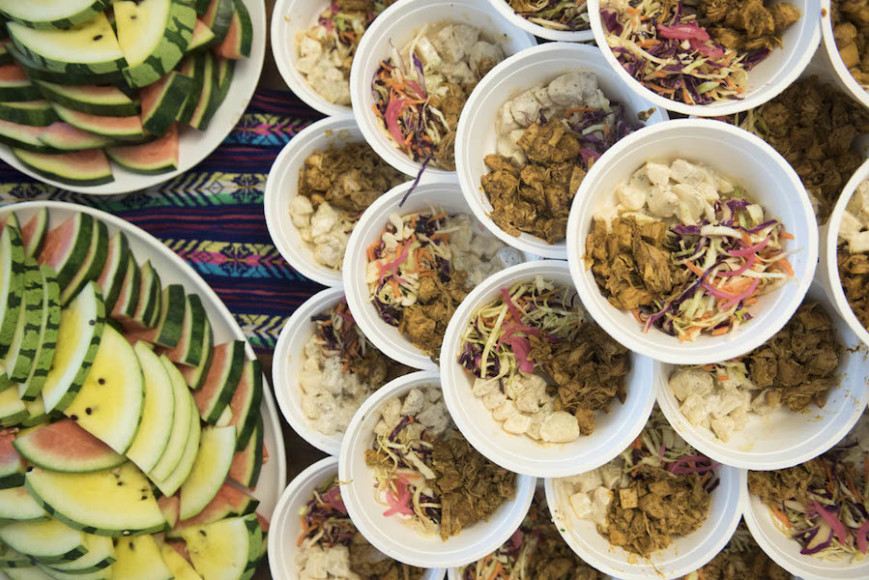 As part of their commitment to foster new food producers, Etsy been a supporter of the National Young Farmers Coalition (NYFC), teaming up with them to help host a fund-raising event at Brooklyn’s Wythe Hotel last February. And later that same month, Etsy provided some of the food for Food + Enterprise, a summit for entrepreneurs and investors working to build and finance a better local food system. Crosswhite attended both events (on the day I met her, she was wearing a NYFC button), seeing them as an opportunity for relationship building. At Food + Enterprise, she met Lukas Volger, the Brooklyn-based entrepreneur behind a line of new veggie burger mixes called Made by Lukas. She connected Volger with chef Mike Poiarkoff of the Vinegar Hill House, and together they created gluten-free vegan kebabs for an all-vegetarian Earth Week Eatsy meal.

“As we continue to grow,” Crosswhite says, “I hope to connect more small food businesses with our caterers to bring a whole array of products to the Eatsy table.”

Dimple-cheeked and full of Texas charm, Crosswhite is a self-proclaimed expert at taking care of people. She grew up in a big family with hungry football-playing brothers who had hungry friends and was taught that the hostess eats last.

“What I do day-to-day doesn’t have to do with the ins-and-outs of restaurant life, it has to do with being there for people when they have questions or they drop their fork. Taking care of people makes you feel a little super human,” she says.

Her caterers are her collaborators, and together they get creative with local fare and try to give the Etsy crew new experiences. Their staff includes a lot of straight-out-of-college engineers, not known for their broad palates (“One of them had a beet for the first time — that was a moment.”) They accommodate as many dietary restrictions as they can, but they also like to keep things varied.

“This week we had two vegetarian meals [and] next week we are definitely going to have pulled pork and lemonade,” Crosswhite says. 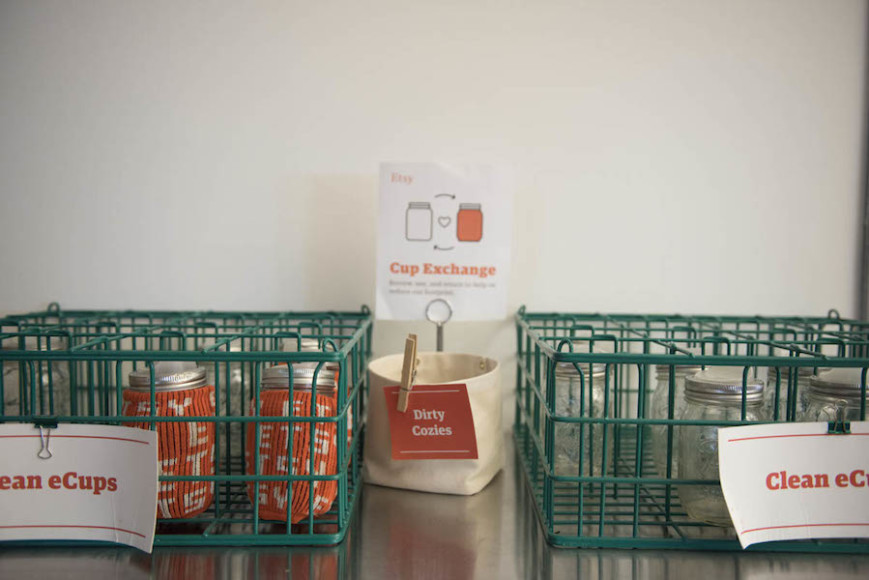 Some of Eatsy’s values are expressed, not by the content of their meals, but by what they don’t offer. Robb is very aware of the food perks provided by other tech companies, like Google, and he is committed to making sure that Etsy carves a different path. At Google headquarters, employees have access to daily, on-site breakfast, lunch and dinner, but Etsy made the conscious decision to serve food just twice a week. Robb believes it would be hypocritical for Etsy to say they believe in supporting local makers and local communities while creating an environment in which employees never have reason to leave their office or frequent local restaurants.

“We want people to eat here and share food, but we also want people to get out and support local businesses and take a walk,” Robb says. “We want to be porous to the community. And we want to foster a sense of gratitude and specialness instead of a sense of entitlement.”

Frost says the experience of working with Etsy is miles away from the world of event catering, which is often thankless work for clients who aren’t understanding of the substitutions and compromises that local, seasonal sourcing can sometimes require.

“They are a willing partner,” she says. “You say, ‘I don’t know if that’s going to work,’ and they say, ‘understood.’ It is lovely to be in a relationship with a client where you are having a conversation.”

When Frost first started working with Etsy four years ago, her business was small and she had an aversion to catering large events. She has since scaled up, rented a kitchen of her own and opened a small Eleven36 storefront on President Street in Crown Heights, where she’ll sell pastries, sandwiches and pour-overs.

The next year will see an expansion at the Etsy headquarters, too. They are moving into a new office across the street where they will have nine whole floors and a larger kitchen. Robb is especially excited that they might be able to make their own yogurt in the new facility. But as with other points in the company’s growth, their goal is for the food program to scale up without losing its picnic-table spirit.

“I think the food is here to support the whole community,” Robb says. “It’s not like there’s the engineering, then there’s food. We think of coding as craft, and you can think of cooking as craft — the notion of keeping things real, building for the long term.”

One waffle meeting and compostable ramen bowl at a time.