These $10 Vouchers are Changing the Face of D.C.’s Farmers’ Markets

A Washington, D.C. program is going beyond the common benefits-matching model by providing low-income residents with money they can only spend on fresh produce. 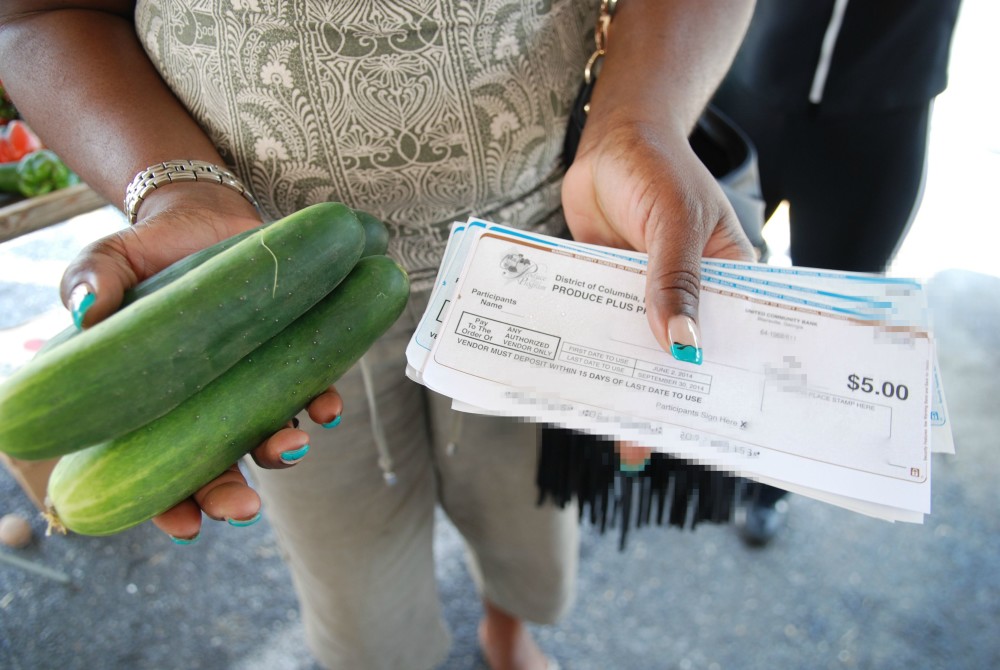 These days, Beatrice Evans finds herself talking to her neighbors on the bus more than usual while she’s commuting to her part-time job at a telemarketing firm. She doesn’t just make conversation with other passengers; Evans has an agenda. She thinks her fellow commuters should know about a city program that essentially gives low-income folks like her free produce at farmers’ markets.


“Every day on the way to work, on the way home, while I’m on the bus, I’ll find a way to make the conversation about Produce Plus,” Evans says. What has come over her?


Evans first heard about the Produce Plus Program when another bus passenger asked her why she didn’t stop at one of the city’s 45 farmers’ markets on the way to work one day.


Evans’ knee-jerk response had been that she couldn’t afford it. Although almost all of those markets now accept supplemental nutrition program assistance (SNAP), or food stamps, Evans has a limited amount to spend. And the benefits don’t go as far on peaches as they do on rice and potatoes at the grocery store. But her fellow passenger told her she could get two $5 checks per day per market that can only be spent on produce all summer long.

For Evans, getting $10 worth of fruits and vegetables she wouldn’t have otherwise was enough to encourage her to get off the bus and try it.

After that first visit, Evans, 62, started shopping at several different farmers’ markets a week, getting $10 worth of produce at each one. She began buying bags of cucumbers, collard greens, cabbage, and squash. And now she wants other people in her boat to know they can do the same.


Market managers and nonprofits across the country have been trying for years to get shoppers like Evans to the farmers’ markets, with mixed success. In many under-resourced urban neighborhoods these markets are the nearest source of fresh—not to mention local—food. But their in-season offerings are still often out of reach.

While more markets have started accepting federal benefits and even doubling their value at the market—often with privately raised funds—those incentives alone weren’t doing enough in D.C. The inconvenience and high cost of shopping at a farmers’ market still couldn’t compete with corner stores and processed foods.

Since it began in 2014, Produce Plus has provided the extra incentive to get a lot more people to the market.

“We’ve got lines around the block starting a half-hour before the market, in the heat of August,” says Lauren Shweder Biel, executive director of the nonprofit DC Greens, which hopes to see the program expand beyond the city’s $450,000 budget for 2016.

This year, thanks in part to evangelists like Evans, Produce Plus blew through its funding by the end of August. And D.C. councilmember Yvette Alexander scrambled to find more funds to keep the checks coming through the end of September. Part of Biel’s vision is to extend the program year-round at farmers’ markets that remain open rather than turning recipients away just as local harvests hit their peak.

“I sorely miss those vouchers,” says Evans, who saved up other farmers’ market funds from a program for seniors so she could buy collard greens and sweet potatoes for Thanksgiving from the market, now that she’s in the habit. 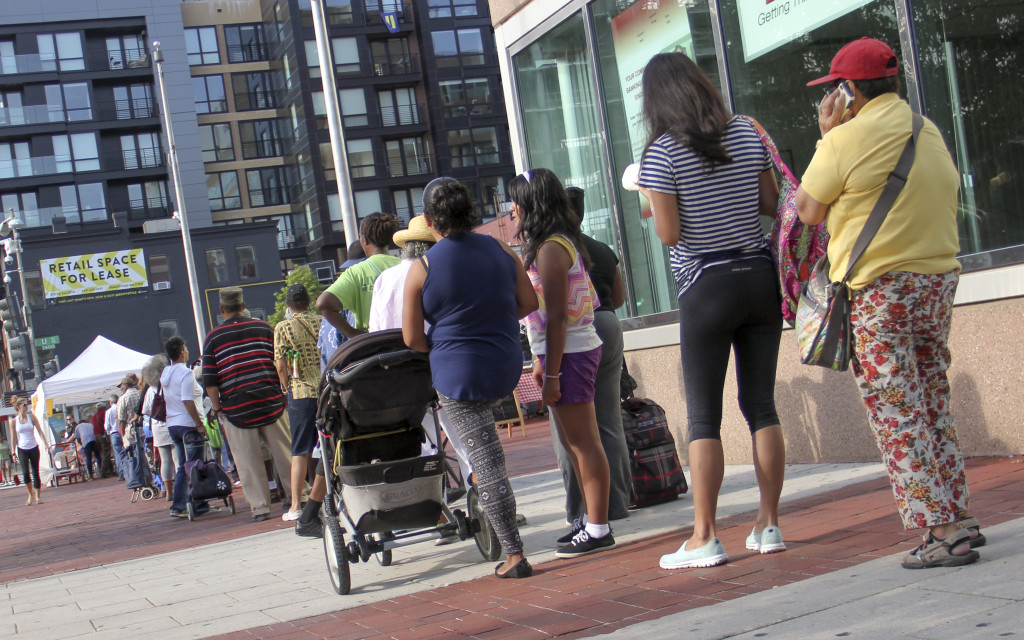 “It is difficult to overstate the impact of this program,” says Pam Hess, executive director of the Alexandria, Virginia-based Arcadia Center for Sustainable Food and Agriculture, which drives a mobile farmers’ market bus into the city’s food deserts. “It puts the means to buy healthy food in the hands of people who otherwise can’t afford it and in most cases have never shopped at a farmers’ market.”

Produce Plus is open to anyone who can show they’re enrolled in programs like SNAP, Supplemental Security Income (SSI), and Special Supplemental Nutrition Program for Women, Infants and Children (WIC). But it’s also open to anyone on Medicaid, the federal-state health insurance program for low-income and under-resourced people.

“It’s the only program in the country that I know of where just by showing your Medicaid card you get $10 to spend on fruits and vegetables,” says Gus Schumacher, co-founder and executive vice president of Wholesome Wave. The nonprofit he founded with chef Michel Nischan pioneered the first matching programs for federal benefits at farmers’ markets and runs a program that allows doctors to write patients prescriptions for fruits and vegetables.

Osa Imadojemu, legislative counsel for D.C.’s Committee on Health and Human Services, which funds the Produce Plus Program, says linking both funding and eligibility to public health is a cornerstone of the program and one that sets it apart from others.

Though “improving public health” is difficult to measure, Imadojemu (who has a master’s degree in public health) says getting those most vulnerable to diet-related illnesses to eat more fruits and vegetables is a step in the right direction.

“Anytime we can have a significant effect on chronic illness, we can see a corresponding reduction in healthcare spending,” he says. “That would be one of the goals in people getting healthier.”

That’s also one of the arguments to justify the cost of the program, the funding for which comes from the city’s health budget. But the argument will only be made stronger if advocates can show that it reduces other healthcare costs over the next few years.

In the meantime, Produce Plus is providing its customers with other benefits: a sense of community, the opportunity to choose their own produce, and the ability to support local farmers—chipping away at the class divide that often accompanies the growing local food movement.

“It’s been the most effective tool that D.C. has seen in really creating a diverse market,” Biel says of the changing demographics at the city’s markets.

Schumacher says this program goes farther than the first Walmart stores D.C. added in 2013, to get fruits and vegetables into the hands of low-income shoppers.

“It goes back to Michel’s theme of access is meaningless without affordability,” he says, referencing a regular refrain of his Wholesome Wave co-founder. With Produce Plus, he says, “D.C. is paying the farmer to help hundreds of people get healthier.”