With new rounds of funding and plans to expand, indoor farms like BrightFarms and AeroFarms are raising some important questions about the evolution of local food. 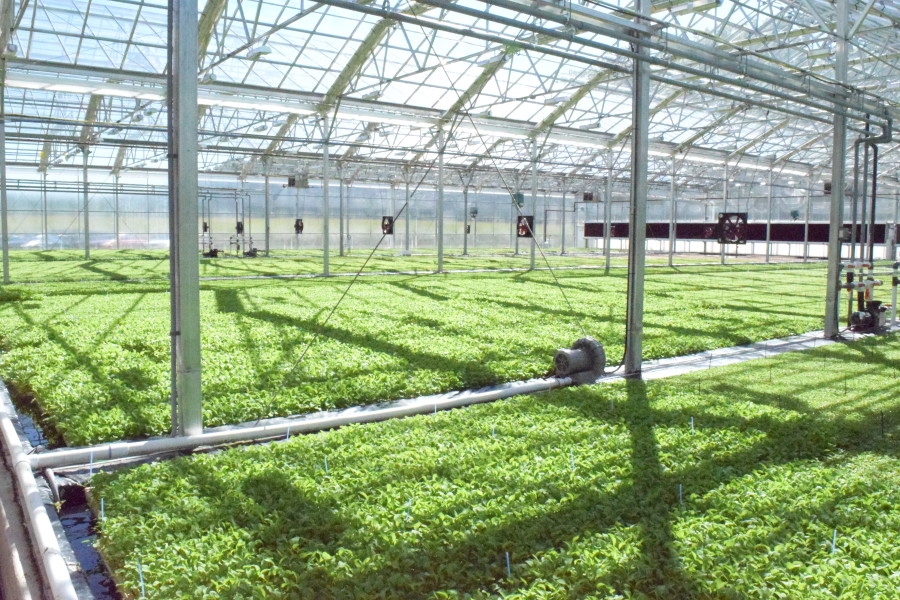 Under the glass-and-metal canopy of a sprawling greenhouse in Yardley, Pennsylvania, BrightFarms is growing salad greens. A lot of salad greens. Arugula and herbs and the occasional tomato–about 360,000 pounds per year–sprout up in white hydroponic trays. When the plants are ready, they are harvested, packed, and driven up the street (or just next door) to the Pennsylvania and New Jersey grocers where they will be sold.

In the coming year, the company plans to expand its presence into the Chicago and Washington, D.C. areas, boosted by a recent $13.7-million round of funding.

“We look at BrightFarms as an expansion of the local food movement,” CEO Paul Lightfoot told Civil Eats.

But not everyone agrees with that characterization.

As the U.S. Department of Agriculture describes it, local food generally involves farmers selling directly to their communities. Indeed, many consumers buy local in the interest in supporting small-scale family farmers and preserving rapidly disappearing agricultural land. With local produce continuing its reign as one of the most sought-after food categories, some agricultural advocates worry that this element of local is in danger of falling by the wayside as companies focus on a more literal interpretation: any fresh food that is grown nearby.

Poppy Davis, the program director for Sustainable Agricultural Education, a nonprofit based in Berkeley, California, worries that the term has been co-opted. “I have an issue with a large corporate structure taking up a lot of space in the niche that is local farming,” she said.

BrightFarms is far from the only business moving local food from the traditional farm context to easily scalable, tech-heavy, and warehouse-based models. In Boston, for example, Freight Farms is building technologically advanced growing systems in shipping containers, and in Chicago, MightyVine grows tomatoes in a 7.5-acre greenhouse for distribution to retailers and restaurants in the urban area. New York’s AeroFarms uses vertically stacked aeroponic beds to grow greens for regional buyers, and just raised $20 million in a Series B round of venture funding, bringing its financing total to $70 million.

BrightFarms started working in urban agriculture in 2007. When Lightfoot came on-board in 2011, he shifted the vision to a focus on commercial scale greenhouses. The plan is to partner with retailers, who sign long-term purchase agreements. BrightFarms builds, owns, and operates greenhouses near these stores; the markets agree to buy vegetables—generally greens and tomatoes—grown there.

By drastically reducing the distance between the place where the food is grown and the store shelf, BrightFarms reduces the amount of shipping fuel by 98 percent, as compared to greens from California, where most supermarket lettuce is grown, Lightfoot said. Shorter travel time also means fresher, more nutritious produce and less food waste, he said.

The latest round of funding will allow the company to focus on getting two new greenhouses up and running over the next year. In 2017 and 2018, Lightfoot intends to expand aggressively, looking at new crops—strawberries have a lot of potential, he said—and new locations.

“I’d like to find us with greenhouse farms all up and down the 95 corridor and the Midwest as well,” he said.

For some, however, this kind of corporate adoption of the local food ethos is troublesome. Davis would rather see a local food system that preserves agricultural land and strengthens communities.

Some studies suggest that this sense of community is, indeed, part of what local food shoppers are seeking. Consulting firm A.T. Kearney recently found that consumers are drawn to local foods because they perceived it to be good for local economies (64 percent), offering a better variety (60 percent), and healthier (45 percent).

Local food advocate Jodi Koberinski, the Oak Fellow for Human Rights at Colby College, argues that a company like BrightFarms, which sells its produce through conventional, established channels like supermarkets, is doing little to reshape a broken food system.

“We’re swapping out a piece and it’s not looking at the overall system,” she said. “You put that kind of money into a corporation of that size, that’s money that is not going into the truly localized food systems.”

Companies like BrightFarms “are a part of a portfolio of new options,” Greenberger said. “It’s a little limiting to see it as a zero-sum.”

Lightfoot is very comfortable describing BrightFarms as a local food venture. What his company does is “squarely agricultural,” even if it doesn’t fit the classic image of a farmer plowing a field with a team of oxen, he said. The company is careful to hire local employees to staff its greenhouses, he added. The Chicago location, for example, will create approximately 25 full-time, agricultural jobs.

BrightFarms targets product categories that are generally shipped thousands of miles before hitting supermarket shelves, his rivals are mega-growers in California, not small farmers, he noted. The company’s practices might even do some good for the local food category, Lighfoot added, by helping supermarkets become more comfortable with the concept and practice of local sourcing.

“We’re only competing in market categories where we can replace long-distance and complex food chains with a simpler, shorter one,” Lightfoot said. “We never feel like we’re competing with local farmers.”