Simran Sethi’s new book is a love letter to foods at risk of disappearing due to industrialization, monoculture, and the rapid loss of biodiversity. 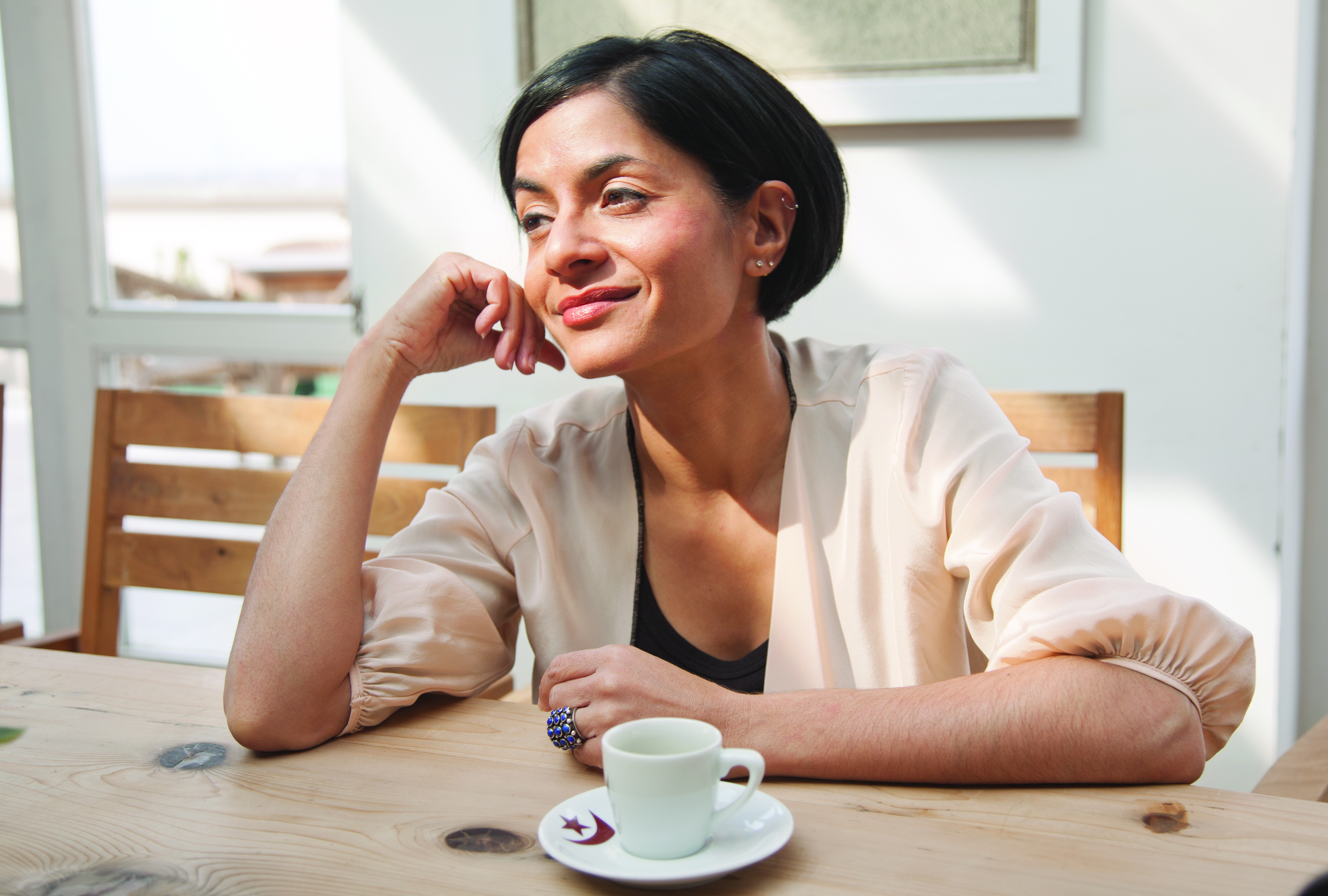 At first glance the chapters in Simran Sethi’s new book, Bread, Wine, Chocolate: The Slow Loss of Foods We Love, read like a list of foods we are often told to avoid: wine, chocolate, coffee, beer, and bread. But Sethi says she’s never bought into restrictive diet trends and instead argues convincingly about the deep importance of these humble foods—foods that human beings have been imbibing for millennia.

The journalist and television personality looks at foods that are at risk of disappearing due to industrialization, monoculture, and the rapid loss of biodiversity, and proposes that the way to save them is to eat more of them. As she sees it, appreciating the great depths of their flavors, varieties, and places in our lives could ultimately save them—and us—from certain extinction. Her book suggests that we can experience even greater pleasure when we think more carefully about our food choices.

To that end, Sethi is not talking about the typical supermarket varieties of those staple foods; instead she says, we need to find the rare varieties: The unusual wine grape varietal grown with patience and careful attention to place; the small-batch, fairly-traded chocolate bar from Madagascar; the heirloom grain used to make a properly fermented sourdough loaf; and the craft beers into which brewers are now putting so much work and thought. Sethi traversed six continents to show her readers what they are missing when they drink “big wine” and Bud Light, or eat a Hershey’s chocolate bar, and standard supermarket sliced bread.

The phrase, “We are what we eat, and we eat what we are” comes up throughout the book. Why is it so important?

That phrase is from my friend Jérôme Waag, he’s one of the two head chefs at Chez Panisse. The first time he said that, I looked at him cock-eyed like he was speaking in tongues. But that’s it—he was so spot on. We eat what we are, we eat what our culture is, we eat what we care about. And so it becomes us, but we also become it—we are shaping and changing and compromising the system because of who we are and who we’re becoming.

What is the significance that all of the foods you chose to write about (besides octopus) are fermented?

For me, the significance had to do with understanding what a transformation all these foods go through. I had never considered how much went into these humble staples and how many hands; how much work by people who hardly had anything, but were giving so much. These are the people who are going to save biodiversity and we have a challenge and a responsibility to support them because we want these foods in perpetuity.

The beer section was particularly interesting. You say, “We evolved through beer and beer evolved through us” and that, “the dawn of civilization was based on the cultivation of grains for beer not bread.” Can you talk about that?

That idea of grain being stuck in some vessel that was likely the skin of some animal and it sprouts and becomes this thing and one of our prehistoric ancestors eats it and gets a buzz and feels good—I loved that. It is so elemental: The grain, the microbes. Now I have so much respect for that beverage. I kind of feel like wine is so easy compared to the complexity of beer. 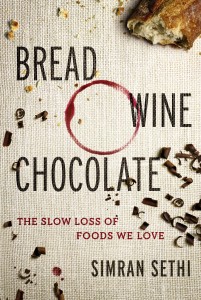 In the Octopus section you describe eating that perfectly cooked octopus dish alone at a restaurant in Lima and crying at the sense of wonder, beauty, and communion you experienced there. And then a few pages later, you write that if we don’t stop eating the exotic animals in the ocean, like octopus, there will be complete extinction of salt water fish by 2048. So on the one hand there is the idea of eating the foods we love in order to save them, but on the other hand, we must also give up certain foods in order to save our environments and ourselves. How do you resolve that?

The ocean is the one place where we should not be going crazy with finding those rare varieties of food and that is because it is the wild. There are no forms of conservation there other than keeping those creatures in the ocean.

Do you still eat octopus?

No, I don’t. To be honest, since I met Sylvia [Earle, an oceanographer], I don’t think I’ve eaten any seafood. I will eat some of the smaller fish, like sardines. I don’t think I’ll ever eat octopus again. They are amazing creatures. Vegans who reads this book will be like, “You’re singling out octopus! What about the cows?”—which I totally get. All animals are gentle and wonderful, but this is the one that captivated me. Find the one thing that captivates you and make your changes there.

I think there is a spiritual erosion that is accompanying this cultural erosion and genetic erosion and there’s a real disconnect. The idea that we would be okay with people in America being hungry, or we would be okay with throwing food away—[how did] these things become normal? There is something being depleted here, there is some sense of loss and some deep desire on my part to regain it.

You write, “The areas where food is sold reveal a lot about a culture and what it values.” What does that say about the U.S.?

There are three supermarkets within an eighth of a mile of one another in Winston-Salem where I live! I don’t understand it. I don’t understand why we need 27 kinds of yogurt. I can’t comprehend what’s happening, but something’s happening. For me, what was most stunning when I first started talking about this book, was that I kept saying, “We’re losing all this diversity,” and everyone’s like, “Huh? I go to the grocery store and there’s tons of stuff.” But there’s one [breed of] cow providing 90 percent of all of that diary, all of that butter, all of that ice cream, all of that milk. There’s one [type of] banana, there are three [types of] apple. I mean, we could grow thousands! What does this mean? What is that saying about what we value?

Instead of preserving agricultural biodiversity, we are talking about fortifying rice and creating this genetically modified variety. It is an interesting thing that people would rather invest millions of dollars in research and development to fortify foods as opposed to just providing and creating a diverse variety of foods where we can also get those nutrients.

I was stunned to learn, even in places with a lot of food insecurity—like throughout Asia—that they still have better diets than we do because they have access to all these wild foods from the forest. Here, obesity is more of concern than being underweight, but we’re still malnourished. So whatever we’re doing with our floor-to-ceiling supermarket aisles isn’t feeding us well. It is feeding us—but I guess that is the question: How do we want to be nourished? And I mean that in the broadest sense.

You mention that your ideal audience for the book is The Daily News rather than The New Yorker. Why?

My deepest fear is [preaching to the choir]. If it was just going to be us who were going to change the system and transform agriculture, we would have done it by now because we have some great leaders who are championing changing food and agriculture. But I think we need to bring more people into the conversation.

Some people have asked, ‘Are you are advocating for us all to eat $13 bars of chocolate?” No! I’m advocating for us to all pay attention and just merely consider what has happened here. And if you’re going to eat that Big Mac, or if you’re going to drink that bottomless coffee from Dunkin’ Donuts, just own it. [If you read this book], you’ll know how all this stuff comes together, so whatever choices you make, own them. I was trying to humanize some of these stories so the foods weren’t just commodities that showed up at the grocery store—or the thing that got you through your morning—without realizing somebody else’s hopes and dreams were also bound up in making it.